These shocking images looked a lot like Jan. 6, in warmer weather. Is history repeating itself already? 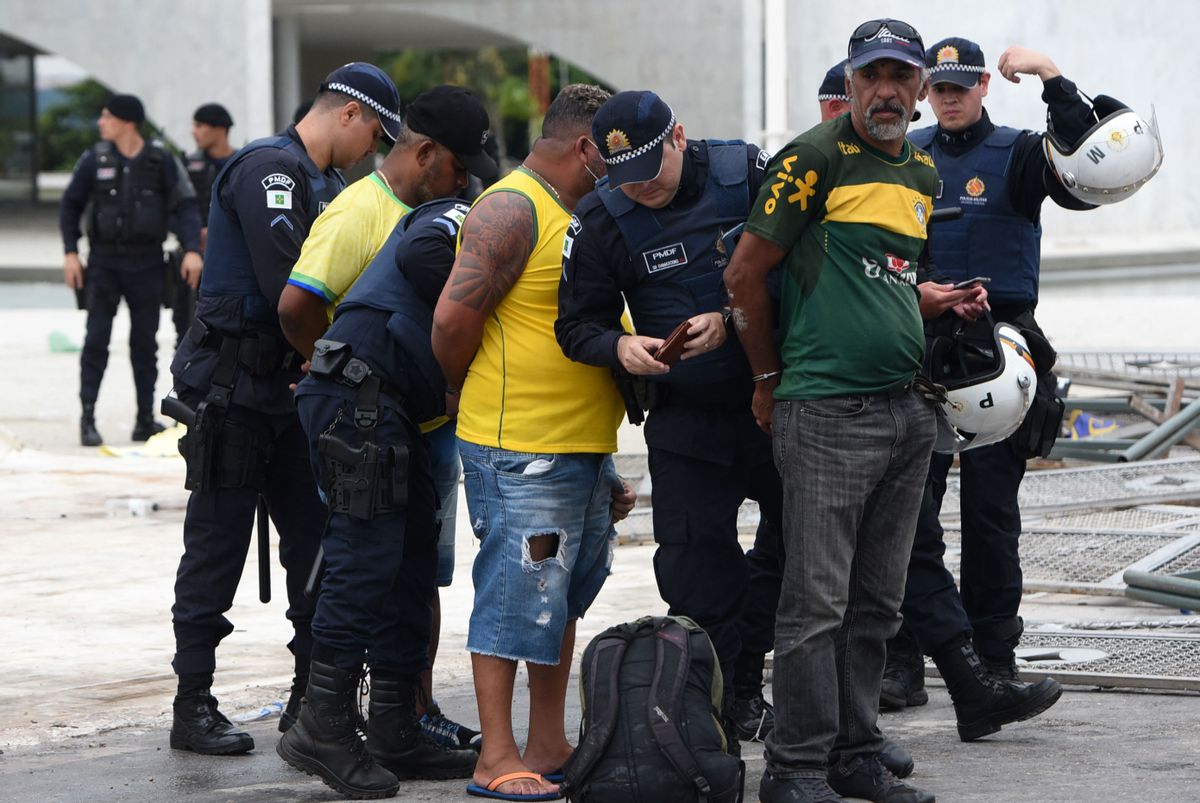 In images similar to those from the Jan. 6, 2021, assault on the U.S. Capitol, demonstrators were seen overwhelming and beating police while breaching the security perimeter of the buildings.

It comes weeks after Bolsonaro was ousted in an election that saw the return of leftist former President Luiz Inácio Lula da Silva. The Conversation asked Rafael Ioris, an expert on Brazilian politics at the University of Denver, to explain the significance of the attack and what could happen next.

Who was behind the storming of the Brazilian Congress?

What we saw was thousands of hardcore supporters of Bolsonaro – those who share his extreme right-wing agenda – attempting to take matters into their own hands after the recent election. 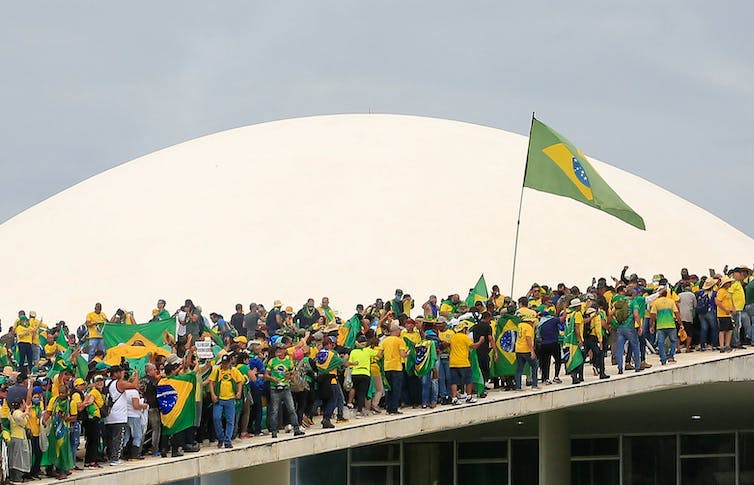 Even though Bolsonaro wasn't there in the capital while the attack took place — he was in Florida — I believe he is ultimately responsible for what occurred. While he was in power he encouraged distrust in political institutions, advocating the closure of Congress and attacking the Supreme Court, two of the institutions targeted by demonstrators.

Others were also behind what happened. Protests have been taking place for weeks, and there are big funders of the demonstrations, such as large landowners and business groups who helped pay for the busing in of thousands of Bolsonaro supporters to the capital, Brasília.

And then there is the role of the military. Leading military figures have been supportive of Bolsonaro's extreme right agenda for a long time and even recently have displayed outright support for several pro-coup demonstrations unfolding in different parts of the country in the lead-up to the attack.

The lack of security preventing the storming of key institutions in the capital also leads me to ask: Were they negligent, or were they complicit?

Can you expand on the role of the military?

Street security is not a responsibility of the armed forces, but the military's continued support for Bolsanaro's agenda has helped provide legitimacy for the holding of such views among members of the state-run military police. And it was the military police who were tasked with keeping the demonstrations in check in Brasília.

The pro-Bolsonaro demonstrators are demanding a military intervention to overturn what they claim, with no evidence, to be a fraudulent election that saw Lula come to power.

Their hope is that senior members of the military — many of whom have expressed support for Bolsonaro and sympathy for the protest camps that have been set up near army bases — would support the push to oust Lula.

Brazil has a long history of the armed forces not accepting civilian rule. The last military coup was in 1964. Of course, circumstances are different now from then, when in the heat of the Cold War the coup was supported by outside governments, including the U.S.

Brazil has been at a crossroads. The Bolsonaro presidency saw the country backslide on democracy, as trust in institutions eroded under attack. And close to half the country still voted for him.

Bolsonaro cultivated close ties to the Brazilian military by moving key military people into positions in government. Right-wing generals friendly with Bolsonaro became ministers of defense, chief of state and even the minister of health at the height of the COVID-19 crisis. Moreover, it is estimated about 6,000 active military personnel were given jobs in nonmilitary positions in government in the last eight years.

Some generals in both the Navy and the Air Force especially have been supporting the protests. Since the election, you have had generals proclaim that demonstrations demanding military intervention were legitimate.

I think it is fair to say that segments of Brazil's military were encouraging what happened.

But when it came down to it, the armed forces were quiet. The military may have nurtured the protest, but when it came to the idea of a traditional coup — tanks on the streets stuff — that just didn't happen.

So would you characterize this as an attempted coup?

That is a central question. As events unfurled on Jan. 8, it looked more like a protest that got violent and out of hand — the level of destruction inside some of the buildings attests to that.

But it was weeks in the making and well financed, in that hundreds of buses were paid for to get Bolsonaro supporters to the capital. And the expressed aim of many protesters was military intervention. So in that sense, I would say it more akin to an attempted coup.

What does the attack tell us about democracy in Brazil?

Brazil has been at a crossroads. The Bolsonaro presidency saw the country backslide on democracy, as trust in institutions eroded under attack from the president himself and through corruptions scandals. And close to half the country voted for him despite his record of undermining democracy. But the election of Lula seems to indicate that even more want to rebuild democratic institutions in the country after four years of attack from Bolsonaro. 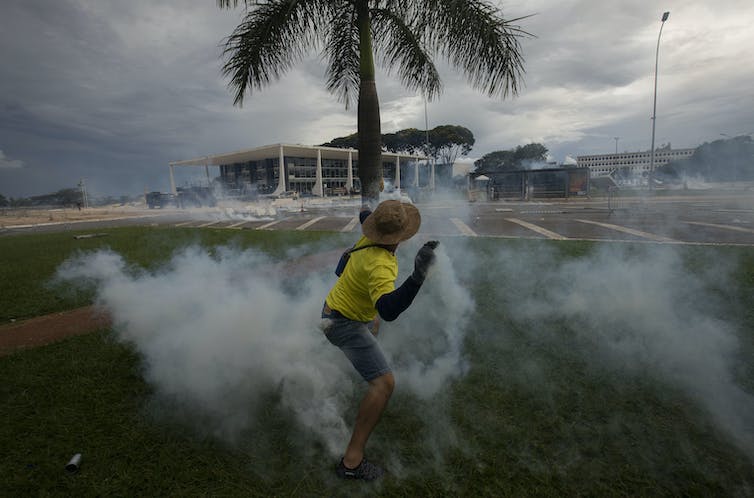 So this could be a turning point. The media in Brazil has come out strongly in denouncing the actions of demonstrators. In the coming days and weeks, there will be investigations into what happened, and hopefully some degree of accountability. What will be key is Lula's ability to address the anti-democratic elements of the military.

Are comparisons to the Jan. 6 attack on the U.S. Capitol valid?

Trumpism and Bolsonarismo share a narrative of stolen elections, with supporters drawn from the right who support issues such as gun rights and traditional family structures.

An important difference is the role of the military. Although former military personnel were at the Jan. 6 attack in D.C., top U.S. military figures condemned it. Nor was the aim in the U.S. to see military intervention, unlike the Jan. 8, 2023, attack in Brasília.

But there are clear parallels — in both we saw extreme right-wing, powerful groups and individuals refusing to accept the direction of a country and trying to storm institutions of power.

Now I'm wondering if there will also be parallels in what happens after the attack.

In the U.S., authorities have done a good job punishing a lot of people involved. I'm not sure we will see the same in Brazil, as they might need to confront powerful groups within the military and police forces around the country. So democratic actors within and outside of the county will be essential in supporting the task of defending democracy in Brazil.

about this week's chaos in Brazil