"Not sure that's how it works": Experts mock Kevin McCarthy's plan to "expunge" Trump impeachment 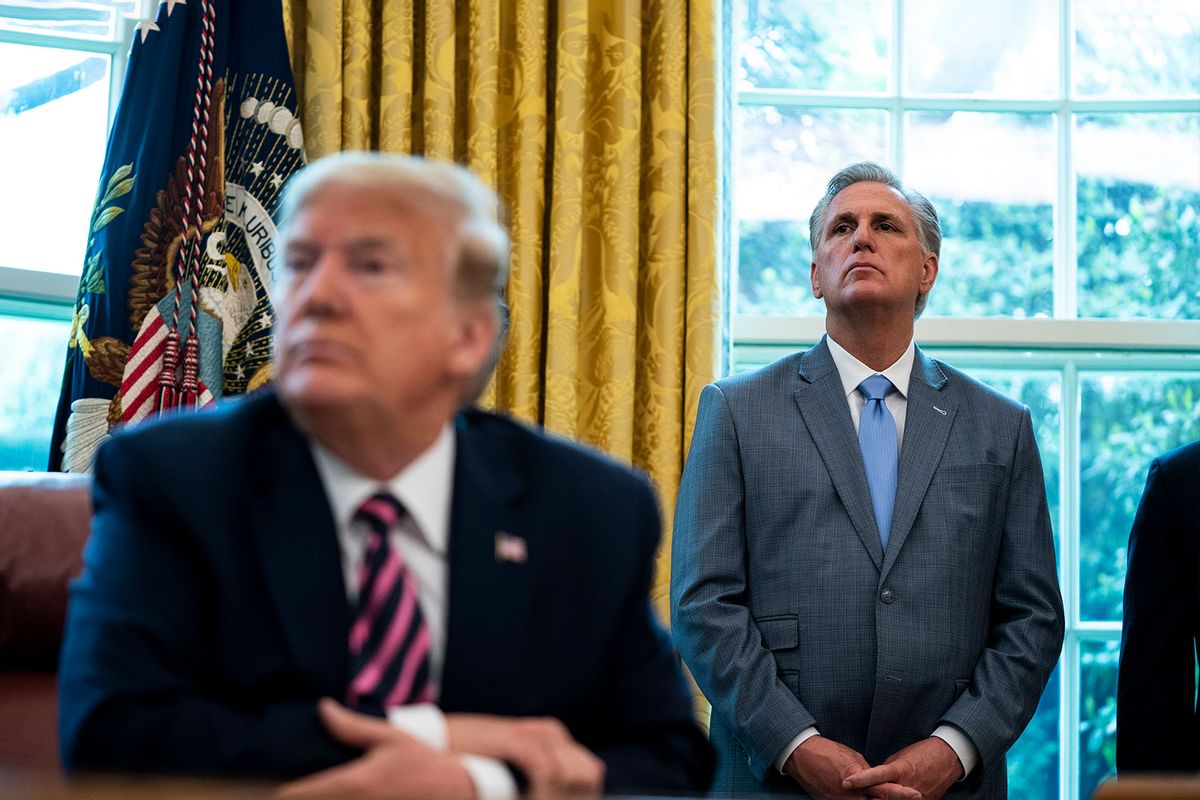 House Speaker Kevin McCarthy, R-Calif., announced on Thursday that he would consider expunging one or both impeachments of former President Donald Trump.

Trump — who is running for president for the third time in 2024 — was impeached twice during his time in office. The first was in 2019 after it was discovered that he withheld military aid from Ukraine in exchange for political favors, and then in 2021 for instigating the Jan. 6 riot at the Capitol. While he was acquitted during Senate trials, the impeachments by the Democrat-led House were a part of the historic record.

McCarthy was asked at a news conference whether he may entertain the prospect of an expungement now that Republicans control the House.

"I would understand why members would want to bring that forward," McCarthy said of the possibility of expungement. "I understand why individuals want to do it, and we'd look at it."

He did not explicitly mention whether the House would try to expunge one or both of the impeachments, but shared his sympathy for what Trump "went through," including allegations of collusion with Russia during his 2016 presidential campaign.

In January 2021, McCarthy condemned Trump for his role in the Capitol attack that resulted in the deaths of five people and over 140 injuries to law enforcement.

"The president bears responsibility for Wednesday's attack on Congress by mob rioters," McCarthy said on the House floor on Jan. 13, 2021. "He should have immediately denounced the mob when he saw what was unfolding. These facts require immediate action by President Trump."

However, later that month, McCarthy visited Trump at his Mar-a-Lago estate to discuss the GOP strategy to take over the House. The pair took a photo together and McCarthy later voted against impeaching Trump.

Last week, during the historically long voting process for Speaker of the House, Trump urged Republicans to vote for McCarthy and personally spoke to those in the party who opposed his bid.

Experts are reacting to McCarthy's statement on Thursday, calling it "outrageous."

Noah Bookbinder, the president of the watchdog group Citizens for Responsibility and Ethics in Washington, wrote in a tweet that "it is outrageous that Speaker McCarthy would consider expunging Donald Trump's impeachments. Trump incited a violent insurrection and tried to overturn an election he lost. Congress should have barred him from office. But the Trump wing is now ascendant."

It is outrageous that Speaker McCarthy would consider expunging Donald Trump's impeachments. Trump incited a violent insurrection and tried to overturn an election he lost. Congress should have barred him from office. But the Trump wing is now ascendant.https://t.co/TWxFgU270o

Not sure that's how it works —> McCarthy says he's willing to look at expunging a Trump impeachment https://t.co/OkIFhT7XEK

"More evidence that [the] whole elite GOP donor/strategist "it's time to move past Trump" consensus after 2022 hasn't reached the House GOP," he tweeted Friday.

Award-winning journalist Joel Mathis pointed to the absurdity of the possibility of expunging the Jan. 6 impeachment.

"The insurrection? Never happened. You'll be astonished how much it never happened," he tweeted. In a sarcastic follow up, Mathis wrote that McCarthy's consideration "will definitely divert the American public's attention away from the GOP's slavishness to Trump."

McCarthy is not the first Republican to consider expungement for the former president's impeachments. In the last Congress, Rep. Elise Stefanik, R-N.Y., and then-Rep. Markwayne Mullin, R-Okla., supported a resolution to expunge Trump's 2021 impeachment over Jan. 6.

At the time, Mullin accused Democrats of engaging in "personal politics" during the impeachment process.

"Democrats used their second impeachment resolution to once again weaponize one of the most grave and consequential powers of the House," Mullin said at the time. "This was never about the Constitution; it was rooted in personal politics."

Last year, Stefanik, who currently serves as the Republican conference chairwoman, said that the Jan. 6 impeachment was a "sham process," and that Trump was "rightfully acquitted."

"It is past time to expunge Democrats' sham smear against not only President Trump's name, but against millions of patriots across the country," Stefanik said.

While the Democratic-led House ignored the resolution at the time, Republicans are now in the majority, which means the resolution could potentially reach a vote.