"Ginny & Georgia" has a tone problem, undermining its emotional impact

From the pile-on of dramatic events, to no processing time, to disconnected music — what is going on in Wellsbury? 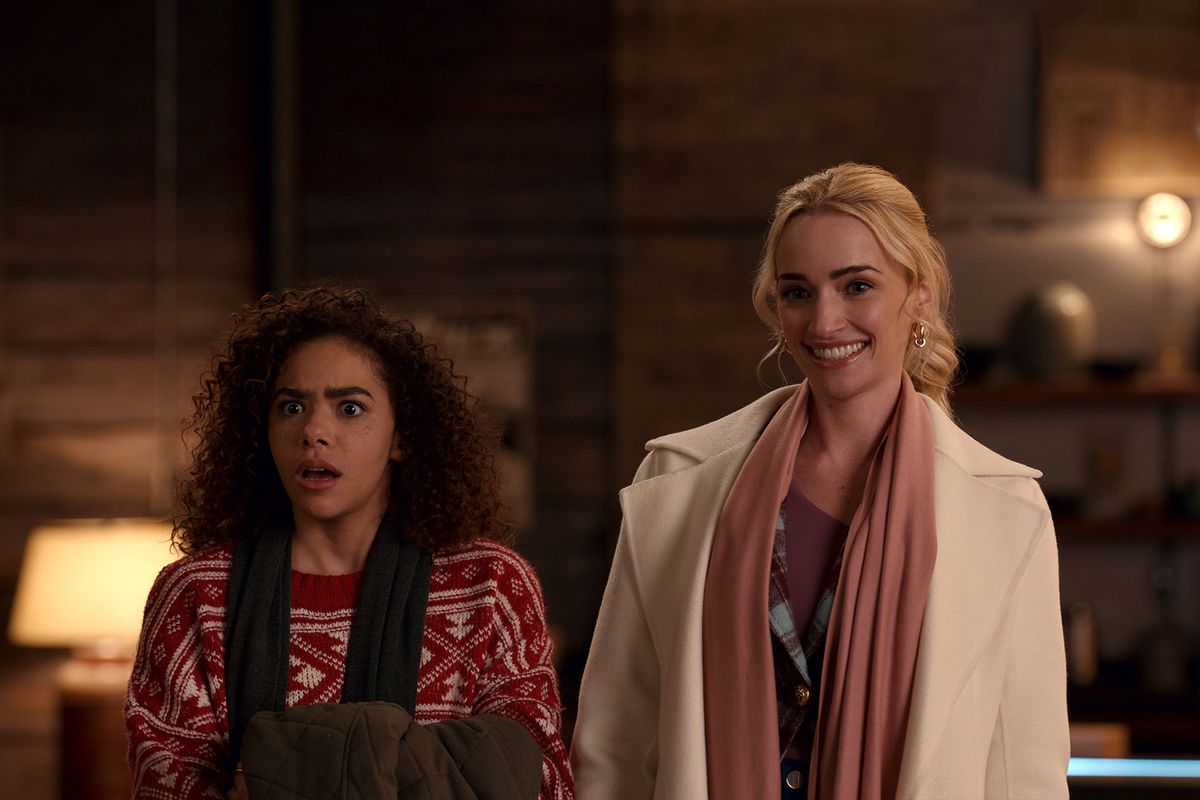 Antonia Gentry as Ginny and Brianne Howey as Georgia in "Ginny & Georgia." (Courtesy of Netflix)
--

This article contains spoilers for season 2 of Netflix's “Ginny & Georgia”

As a young adult, my two favorite shows aired at the same time. In the dark days before DVRs or streaming, this meant a lot of toggling between channels during commercial breaks. Both shows had their issues, as it turned out. "Buffy the Vampire Slayer" boosted nearly as many racist, sexist and homophobic jokes as monsters. Its competition, "Gilmore Girls," ignored issues of class while doing terribly with queer issues and characters of color.

"Ginny & Georgia," now returning for its second season on Netflix, caught my interest immediately. The show was billed as like "Gilmore Girls"— where the two main characters start as a 16-year-old and her mom who had her at 16 — but a story that shows what it's really like to have a teen mom. I'm friends with adults who were born into similar circumstances, and in high school, some classmates became parents at that young age. It wasn't like "Ginny & Georgia" for any of them.

But then "Ginny & Georgia" operates in its own universe, one where the rules of physics don't seem to apply. Events happen fast and dramatically. Consequences, rarely at all. And in its second season, the show has a major tone problem.

Let's have a cringey talk about multiracial identity, from "Ginny & Georgia" to Harry and Meghan

"Ginny & Georgia" stars Brianne Howey as Georgia, who starts the show as the 30-year-old single mom of two. Her kids, Antonia Gentry as teen Ginny, and Diesel La Torraca as nine-year-old Austin, have two separate dads, one of whom Georgia sent to prison, framing him for embezzlement (although he did do some financial crimes on his own) after he abused her. Another husband, Georgia murdered with poison. Wait, that's two husbands she murdered, having married then murdered her creepy landlord when she was a teen mom who lost custody briefly after being busted for running an illegal gambling ring. She was also in a biker gang.

The town is an afterschool special.

Are you following? Even seeing every episode religiously, it's hard to keep track. When the second season starts, Georgia is engaged to Paul (Scott Porter) her boss and the mayor of the bucolic, New England town to which she moved her kids. She's also balancing Ginny regularly seeing Zion (Nathan Mitchell), her dad, and Austin seeing his dad, Gil (Aaron Ashmore), who gets out of prison and starts coming over (and worse). A private investigator is also hot on Georgia's heels. It's not simply Georgia, but multiple characters, even minor ones, who have convoluted and ever-complicating backstories as well as current stories. 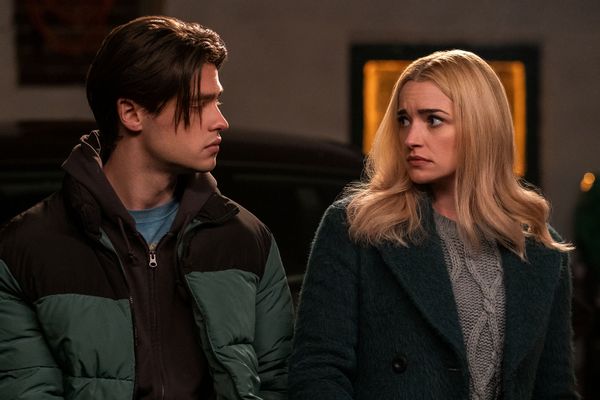 Felix Mallard as Marcus Baker and Brianne Howey as Georgia in "Ginny & Georgia." (Brooke Palmer/Netflix)Along the lines of other Netflix shows such as "Sweet Magnolias," there's an undercurrent —that's not so under — of teen characters and their drama. Young characters break up and get together, stop speaking to one another, have addiction issues and disordered eating. And they put on a play! (Think "Bridgerton" crossed with "Into the Woods.") The town is an afterschool special. It's not that the events are too much on their own; it's that there's so damn many of them. Coincidences abound. Joe (Raymond Ablack), the owner of the popular café Blue Farm is someone Georgia met when they were teens, and though they appear to not recognize each other at first when Georgia moves to his town, he's carried a torch for her all these years.

A big part of effectively writing about trauma is giving space to the aftermath.

Too much also happens too fast on "Ginny & Georgia," particularly in its second season. Young heartthrob Marcus (Felix Mallard), the bad boy Dawson of this show, complete with sneaking into neighbor girl Ginny's window, becomes a teen alcoholic over the course of minutes. Yet another intense storyline is given so much explicit weight, it feels exploitative: Ginny self-harming. Much of the first part of the new season is bogged down by very real issues that unfortunately are conveyed through a lot of screaming.

We need to have empathy for Ginny, and it's a problem that we don't have more. But we can't catch our breath. The show shifts from Ginny trying to reach out to an angry friend to pretending to poison her future stepdad at breakfast. We switch from Ginny heading up the stairs in slo-mo to a scene from the recent past of Georgia discovering Ginny had discovered evidence of her past murdering. This takes place over mere minutes. We jump from screaming to sweet talk, and from current subplot to the far past to a few days ago. Was this edited by a teen experiencing mood swings? 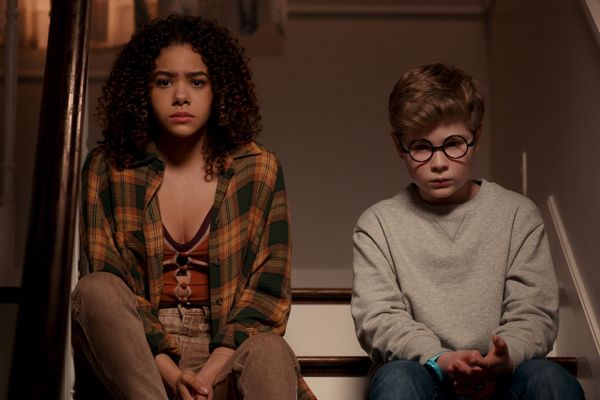 Antonia Gentry as Ginny and Diesel La Torraca as Austin Miller in "Ginny & Georgia." (Courtesy of Netflix)Heavy-handed with both knowing voiceovers and TikTok hits, transitions seem like an afterthought in the wild ride that is Season 2. The music is jarring, none more so than when Georgia kills again and the music is downright jaunty, a disconnect. The season ends on a cliffhanger, but what could have been — and probably should have been — an emotional moment of a young, sobbing child running after a police cruiser is spoiled by the upbeat stylings of that classic girl group song "Chapel of Love." It doesn't feel ironic. It feels tonally wrong.

One thing "Ginny & Georgia" has plenty of is plot twists, like a Stars Hollow "Virgin River." But something the show lacks desperately is reaction time and processing. Is Georgia just a psychopath? It's possible, though female psychopaths may be rarer than male. Georgia also displays great love, not only for her children, but for Paul and for some of her friends. That's not an entirely believable portrayal of psychopathy. It's also not like the audience comprises all psychopaths. We need events and emotions to line up, and we need time to respond to them.

Sometime in the last few years, shows started addressing trauma in major ways. Many of the strongest stories, like "Yellowjackets," effectively use flashbacks with younger characters to trace the lasting impression of violence. But a big part of effectively writing about trauma is giving space to the aftermath: the slow, crooked path to recovery. Or not recovery. The impact, which can last years. Or forever. Despite its drama, "Virgin River" does that well. A character was raped before her first appearance on the show. That unseen violence colors all her decisions, and her current relationships with lovers, friends and family. The viewer sees her processing. We see her feeling. There's not a lot of feeling on "Ginny & Georgia." The characters don't have time.

It's hard to experience the aftermath of trauma when events come faster than Georgia's outfit changes, when we're still reeling from the last major soapy twist and confused by its breezy musical accompaniment. We're trying to figure out what just happened when something else happens, equally huge and head-scratchy. It makes the events, many of which are big and important, like self-harm, seem cheap. And the tone: fragmented at best.

The best thing "Ginny & Georgia" could do for its third season? Slow down.

about drama and trauma