Have hope for "The Last of Us," a drama about enduring at the end of the world, not just surviving

Guided by the video game's creator Neil Druckmann and "Chernobyl" maker Craig Mazin, this is a journey worth taking 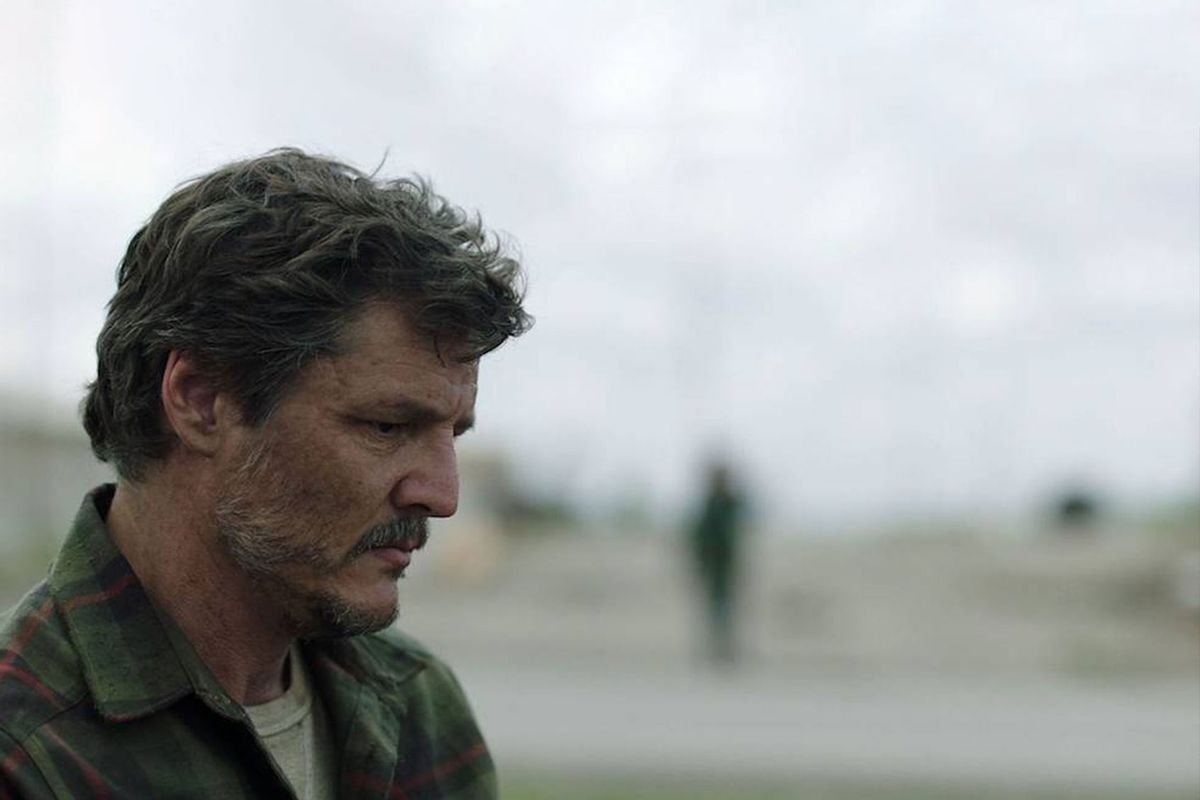 Pedro Pascal in "The Last of Us." (Liane Hentscher/HBO)
--

Shockingly enough, the pandemic seems to have depleted our appetite for apocalypse fantasy. Who'd have thought it?  Not the people who made "The Walking Dead," "World War Z" and every other shambling undead property that ruled the 2010s, along with more recent end-of-the-world, zombie-free tales like "Y: The Last Man" or the remake of "The Stand."

If their brief lifespans are an indicator of the longevity odds of "The Last of Us," HBO's high-budget video game adaptation would seem to have a difficult if not impassable road ahead of it – and not merely due to our presumed fatigue with scripts about some impending version of Earth's big Game Over. Conversions of console-based mythologies to screens have a notoriously poor track record. In that regard, the starting line for "The Last of Us" is better positioned than, say, the challenge that the "Resident Evil" series writers faced in their effort to conjure prime rib out of the conceptual equivalent of Steak-Umms.

In creating "The Last of Us" Neil Druckmann intentionally spins a narrative as stalwart as its ferocious gameplay. The non-player character (NPC) backstories aren't simply described in their inventory notes but play out as the main characters travel through their forbidding environment. This is just one reason the PlayStation games have earned an enthusiastic fanbase since the first one came out in 2013.

Not even that is enough to guarantee a video game adaptation's success. Druckmann is also the creative mind behind the "Uncharted" franchise, which became a film; take that information as you will. "The Last of Us," however, enlists the storytelling expertise of Craig Mazin, the Emmy-winning creator of "Chernobyl." By merging the psychological profundity and emotional realism Mazin applied in his historical drama to Druckmann's speculative premise, its nine episodes feel at once harrowing and, strangely enough, hopeful.

"The Last of Us" could change how Hollywood does video games

Pairing "Game of Thrones" alumni Pedro Pascal and Bella Ramsey is key to establishing that air of optimism, however faint it may seem at times. In Druckmann's universe, the extinction-level pandemic is caused by a Cordyceps fungus akin to a real version that infects insects and eventually takes control of their brain function, driving them to spread their spores. In "The Last of Us," the fungus evolves to infect humans, transforming them into a variety of infected, with the most dangerous being the later-stage monsters known as "clickers" and "bloaters."

its nine episodes feel at once harrowing and, strangely enough, hopeful.

Viewers who haven't played the video game don't need to know those terms or even be concerned that episodes are driven by running from hordes of brainless, drooling former folk. Like "The Walking Dead," the living pose a higher degree of day-to-day peril to their fellow humans than the undead; in this world, the main factions are the military's fascist governing arm, known as FEDRA, and the resistance network dubbed the Fireflies.

Ramsey's Ellie isn't a fan of belonging to either, desiring most of all to be cherished by someone. The actor is familiar to most as the fearsome Lyanna Mormont, the young Lady of Bear Island in "Game of Thrones" whose battlefield scowl captures the mood of every woman who has had it. 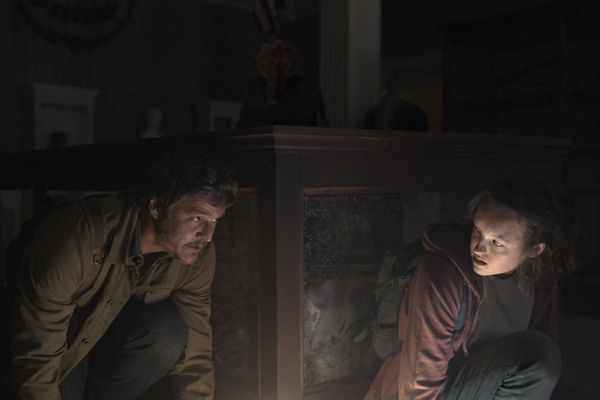 Pedro Pascal and Bella Ramsey in "The Last of Us" (HBO)Here she gets to play the part of a playful, curious, and tough 14-year-old who was born after the virulent fungal outbreak decimates humanity. All pre-outbreak technology is a marvel to her, from aircraft to video games. (The show's shout-out to "Mortal Kombat" is delightful.) When she and Pascal's Joel encounter an old car at one point, he mutters about it being a piece of crap. She counters, with her face transformed into a beacon of awe, that to her it might as well be a spaceship.

Circumstances place her in Joel's care, although he refuses to allow affection to soften him. Ellie becomes his responsibility; he insists on viewing her as cargo.

Pascal is mainly associated with "The Mandalorian," which makes it easy to liken this situation to his "Star Wars" character. But Joel is hardened by loss. Two decades after civilization falls, he's a black market smuggler who links a will to survive to his brother Tommy (Gabriel Luna), and his partner Tess (Anna Torv).

When Tommy doesn't return from a mission for the Fireflies, Joel and Tess take on the job of smuggling Ellie beyond the walls of Boston's grim quarantine zone and into hollowed-out cities, unfamiliar forests, and the vast wilderness that has reclaimed the land from mankind – untamed places that are home for the fungus to thrive unchecked, along with its once-human hosts.

Describing the stakes in those terms makes it easy to picture all the ways that "The Last of Us" could have fallen into the trap of making a series out of what are essentially gaming cinematics. But Druckmann and Mazin avoid this by expanding the backstories mainly implied in the game into fully realized biographies.

It adequately pays homage to the adrenaline-spiking chaos that is the survival horror genre's selling point.

The most beautiful of these inspire the third episode starring Nick Offerman and Murray Bartlett as Bill, a featured non-player character in the game, and Frank, another figure who is merely mentioned. The writers develop seeds sprinkled with the game's narrative into what may be the season's best episode and possibly among the best performances Offerman has ever given.

Do not take this to mean that this drama eases up on the violence or brutality that gamers want to see in these stories. There's a place for non-violent TV drama about how the world continues after society falls; for the time being, that role is played quite well by "Station Eleven." 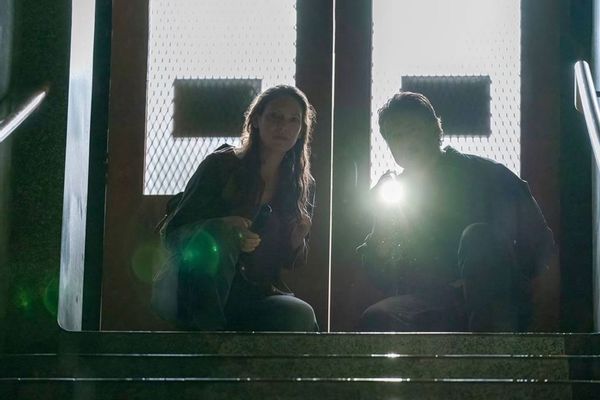 Anna Torv and Pedro Pascal in "The Last of Us." (Liane Hentscher/HBO)

"The Last of Us," in contrast, admirably services its original constituency through a lightning-paced depiction of it end-of-days' opening act, and it adequately pays homage to the adrenaline-spiking chaos that is the survival horror genre's selling point.

Those sequences, and the unpredictable incursion of preternaturally fast and savage monsters here and there, are not this story's primary magnets. (Although, of course, raiders, despots and cannibals are among the threats Joel and Ellie contend with.) Mazin and Druckmann confirm their understanding of our fatigue with subsistence stories and grim battles by emphasizing themes that are more relatable to those looking for escapism instead of another reminder of how scary the world has become.

Joel and Ellie's journey as the primary focus inspires the auxiliary plots to emphasize the necessity of caring for others as a means of affirming one's purpose. This is the doorway for joy to enter, and it's a means for deep pain, betrayal and madness to find its way in, too, and with similar efficiency to that Cordyceps infection.

Connected to this is the importance of trust as both an uncompromisable aspect of survival and living. When we widen that lens to apply that idea to the series as a whole, its creators have made serious efforts to earn that from the audience too. Whatever online trolling there has been over the diverse casting in this series matters is, as usual, irrelevant.

Mazin, Druckmann and the directors got the vital elements of "The Last of Us" right by honoring what makes the game outstanding and making its story come alive for anyone who has never played it and never will. Nonstop action can be enough to move along stories in that format and in comic books. Real people require additional dimensionality – and here, at last, is an apocalyptic fantasy that strives to give us that along with its monsters.

Ultimately that's more effective in persuading the audience to invest in the hearts of these characters and their thousand-mile journey, as opposed to expecting people to be thrilled anew by gazing at the latest herd of traumatized people struggling to endure and survive.