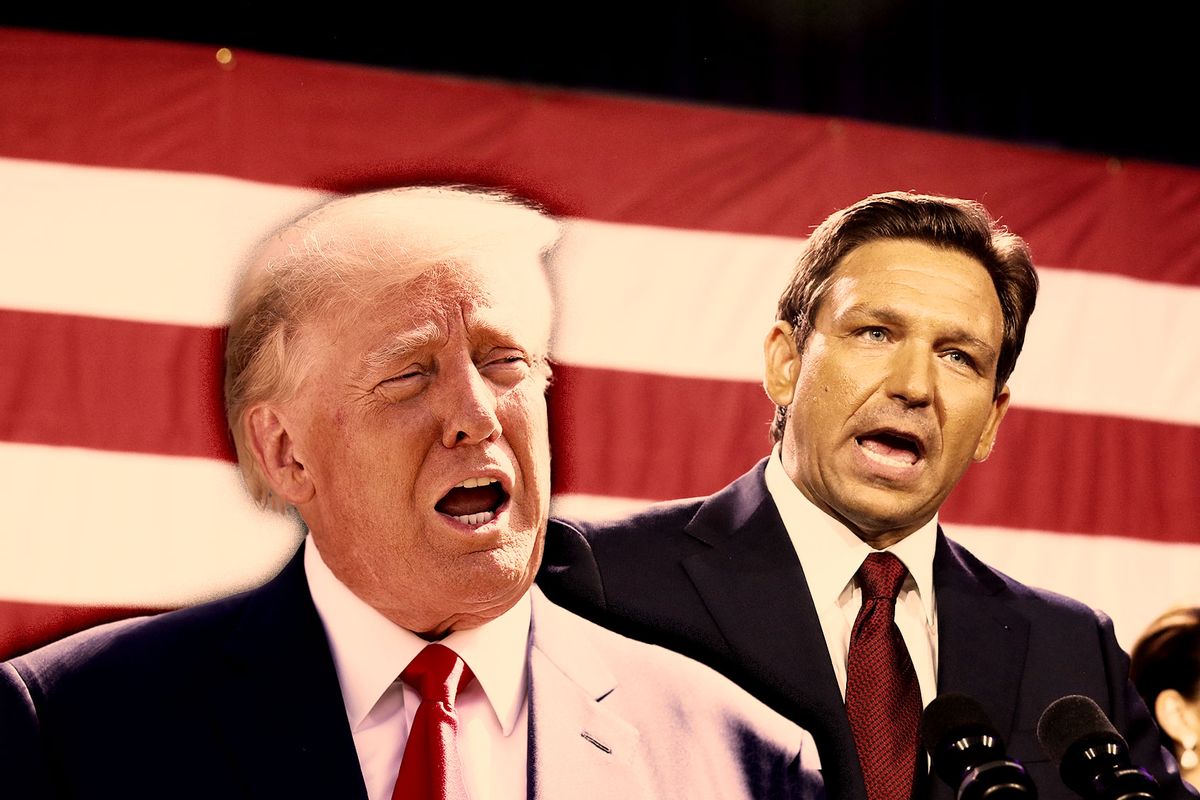 It's begun. And just as we once assumed, it's a tired re-run of 2020 with former president Donald Trump hopping from rally to rally repeating his boring recitation of the Big Lie and the perpetual "witchhunt" and "hoax" mantras. Only this time, the Republican presidential primary is starting early with what's shaping up to be a crowded field. Whether any of Trump's rivals will be able to knock him out remains to be seen — but there's no doubt they think he's weakened enough to chance it.

We've all been closely watching Florida Governor Ron DeSantis, who hasn't yet made any overt moves to run but is nonetheless clearly positioning himself to do it. At the moment he is the only serious contender who still holds office which gives him the opportunity to demonstrate his right-wing bonafides. And boy is he ever doing that.

As I wrote a couple of weeks ago, the list of his aggressive authoritarian policies is already a mile long, each one designed to curry favor with the far right by provoking everyone else. Just last week he added to the pile by overseeing his hand-picked education curriculum watchdog's denial of high school AP classes in African American history, saying that "the content of this course is inexplicably contrary to Florida law and significantly lacks educational value."  They will still be able to offer AP classes in European, Japanese and Chinese history, it's just Black history that doesn't have educational value in Florida. Can they be any more obvious?

DeSantis is running a very assertive, hard right Fox News-centric, culture war campaign. I suspect he and his advisers may believe that he can solidify the MAGA base and then move to more substantive issues like taxes and spending and foreign policy once he jumps into the fray. If that's the case, he's dreaming. This stuff may be red meat to the base but it's four-alarm fires to the Democrats and they will make sure that every voter in America knows about it all. DeSantis' hardcore extremism is way over the top even by Trump's standards which always have an element of farcical bluster that allows people to think he might not be serious. DeSantis, on the other hand, doesn't have a humorous bone in his body.

DeSantis' hardcore extremism is way over the top even by Trump's standards.

And now DeSantis has some serious competition getting ready to make the jump. Former Governor Nikki Haley, Trump's first UN Ambassador, once promised she wouldn't run if he was running. She appeared on Fox News last week and came as close as you can get without actually saying it:

"When you're looking at a run for president, you look at two things. You first look at, does the current situation push for new leadership? The second question is, am I that person that could be that new leader, that, yes, we need to go in a new direction? And can I be that leader? Yes, I think I can be that leader...

"So, do I think I could be that leader? Yes. But we are still working through things, and we will figure it out. I have never lost a race. I said that then. I still say that now. I'm not going to lose now. But stay tuned."

The question is whether proclaiming yourself a leader over and over again convinces anyone that you are one after you spent years sucking up to Donald Trump.

Ivanka and Jared plotted with Nikki Haley to backstab Mike Pence so she could be veep: Mike Pompeo

And speaking of Haley being Trump's VP, yet another former Trumpie has emerged as a contender for the top spot, former Secretary of State Mike Pompeo. He's got a new book called "Never Give an Inch: Fighting for the America I Love" coming out on Tuesday and among the spicy excerpts is one accusing Haley of conspiring with Jared Kushner and Ivanka Trump to replace Pompeo with her on the ticket in 2020. She claims it's "lies and gossip to sell a book" but she's obviously given up on any idea of being Trump's VP this time if he wins the nomination because he'll never forgive her for reneging on her pledge.

Pompeo's book, from what's been reported in the media so far, takes on Trump as well. He claims that Trump told him to "shut the hell up" about Chinese Premiere Xi Jin Ping during the early days of the COVID crisis because it would upset his trade deal. And he discusses Trump's disastrous Helsinki press conference with Russian president Vladimir Putin:

To be clear, Trump's language there was neither accurate nor helpful.To stand next to Putin and say that he believed Putin's claims that he didn't meddle in the U.S. election was very Trumpian. It was also a mistake. It lacked the depth to address the question that had come from the American reporter: "Do you hold Russia at all accountable for anything in particular?" Trump's answer reflected his inability or refusal to separate the Russia Hoax from the fact that Russia had tried to sow chaos in the 2016 election. For Trump, every question about Russia and the elections was poisoned by the narrative of the Russia Hoax.

It's unclear from that if Pompeo agrees with Trump that the Russia Investigation was a "hoax" but I don't think that will matter to Trump if he does. This is the kind of betrayal that will make him see red. But Pompeo does take a very hard line against Putin in his book apparently, which will put him at odds with a large portion of the MAGA base as well. The foreign policy fights in this primary campaign are going to be very interesting with the candidates all over the place.

The question is whether proclaiming yourself a leader over and over again convinces anyone that you are one after you spent years sucking up to Donald Trump.

And then there's Trump, the only officially declared candidate. Sounding like a mob boss he made it obvious last week that he is ready to take off the gloves against DeSantis:

No one knows exactly what he has in mind but it no doubt involves a nasty nickname, insulting his wife, saying he fixed the 2018 election among other things. And he'll attempt to dispatch the others in similar fashion.

He's going to be making his first campaign appearance this week in South Carolina and according to the Washington Post, he's having a rough time lining up endorsements. He's got his homeboys, Senator Lindsey Graham and Governor Henry McMaster, but all the other Republican officials in the state are balking because there are two locals, Haley and Senator Tim Scott, who are thinking of jumping in the 2024 race. Trump doesn't have the juice anymore to threaten them with retaliation for not bending the knee. So much for "clearing the field."

It looks like Trump's going to have to earn the nomination and it's not going to be pretty. Once he gets over having his feeling hurt, I suspect he will relish the fight. It's in his nature.