So what would it look like if the NFL forced players to stand?

It would change the visuals, yes — but they'd be a clearer indictment of the NFL and white supremacy 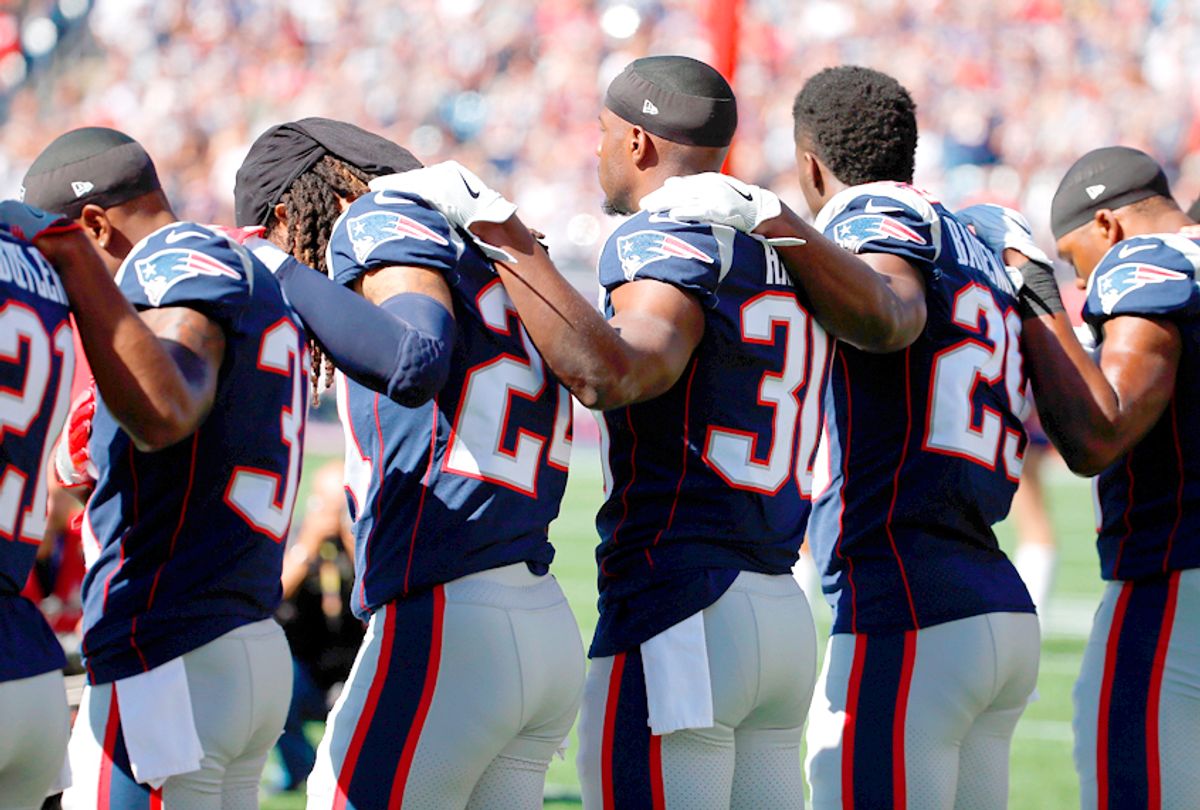 As we wear through the football season and Donald Trump's tirades against black players kneeling continue, many of the public and at the higher levels of the NFL are calling for the league to take action.

A ban would, in his reasoning, keep them from succumbing to the peer pressure of joining this demonstration against police brutality, this demonstration for their humanity. For that, he has drawn a line: Stand or get benched. It's a line many want the NFL as a whole to draw.

Jones also began the now-ongoing references to a pre-existing NFL national-anthem policy that no one had ever mentioned before (and that none other than Donald Trump "reminded" him of). It stipulates that players "should stand at attention, face the flag, hold their helmets in their left hand, and refrain from talking." It is a policy the league itself has quietly begun to promote since Jones' diatribe.

The thing is, the only portion of the "game operations manual" that is currently available is the part about the national anthem. Deadspin reported that not only has the wording changed but "its language did not appear on the web at all until two weeks ago." Make of that what you will.

Jones' demand for players to stand has already drifted into legal territory. A local labor union in Texas filed a complaint Tuesday against the Dallas Cowboys.

The union claims Jones violated the National Labor Relations Act by "attempting to threaten, coerce and intimidate all Dallas Cowboys players on the roster in order to prevent them from exercising concerted activity protected under the act by saying that he will fire any players involved in such concerted activity," wrote Local 100 in their complaint.

With President Donald Trump's insults and insistence that players should be fired for taking a knee, he and Jones may have transformed these individual protests into something closer to a larger, concerted labor activity — something that may find easier access to legal and union protection.

"I know in the modern age people think workers shouldn't have rights, but they still do," Wade Rathke, Local 100's chief organizer, told ESPN. "This union was offended by those comments." Sounds like fighting words.

So any ban would be tainted by constant legal wrangling. But what about the visuals themselves? Well, we've already had a strong preview of that.

Two weeks ago, there were a series of "unity"-directed exhibitions, the most notable of which featured Jones kneeling on the field, arms locked with his players before the national anthem. He and his team stood for that.

With Jones almost winking to the camera and others across the league offering up much in the way of gravitas but little in the way of meaning, these displays of "unity"  came off as hollow, one-off PR stunts meant to quell players who protest, rather than support them.

Look closely and all those locked arms and pre-anthem kneelings seem nothing more than an acquiescent response to the President of the United States calling players who protested racial oppression and police brutality "sons of bitches" at a campaign rally. Overall, they only served to complicate the matter, not draw it to a tidy close.

That's just a preview. The reality of players being forced to stand would provide an even worse look.

Already, we know which players have protested, so we will also know know which will have been coerced. Given that, the whole image of the team will undoubtedly appear compromised. What is the value of everyone standing if, in theory, any individual is doing so against his will? Suddenly the whole team looks like part of the movement instead of the small clusters of men kneeling on the sidelines currently.

Moreover, the ban would underline exactly what the players are demonstrating against on a weekly basis. Overall, the pressure to pick a side and, in NFL Commissioner Roger Goodell's words, "move past this controversy" isn't just coming from Trump. It's another example of how the NFL values silent labor over black lives. It underlines how owners prioritize white comfort over racial justice — a mirror of the problems black people face on the streets every day.

As sports writer Dave Zirin said, "Billionaires are not allies in the fight against the white-supremacist, anti-labor aims of this administration. They are the beneficiaries." Forced standing would only emphasize that.

By the way, Zirin actually sees Trump's Twitter crusade and his scapegoating of black players as part of a larger anti-labor, anti-black plan. "These owners plowed millions of dollars into Donald Trump for a reason, and this is the return on their investment," Zirin writes.

As well, a forced-standing measure might not even stop the kneeling or the discussions. Already players are rejecting the intimidation surrounding the issue.

Tampa Bay Buccaneers defensive lineman Gerald McCoy told Adam Schefter on the "Know Them From Adam" podcast: "I think it's gonna be an uproar if that is to happen because you're basically taking away a constitutional right to freedom of speech."

Elsewhere, Tennessee Titans wide receiver Rishard Matthews told a News 4 producer that he would quit the NFL if they decided to take a hard line on anthem protests.

Eagles safety Malcolm Jenkins told NBC Sports if his team owner made a statement like Jones':

I'd continue my demonstration because my demonstration is in no way disrespectful to our flag, our country or our service members. Neither is anybody in the league who is kneeling. I think we've made that very clear that what we are demonstrating about has nothing to do with the flag but everything to do with social injustice, racial inequality and the things that, you know, Jerry Jones and other owners who are making statements have yet to address.

So, even if everyone were forced to stand, not everyone would, and the protests of those brave few would suddenly have even more impact.

As well, NFL players have already been evolving what protests during the anthem can look like. Several players have started to raise their fists in black-power salutes as an alternative to kneeling, a move that neither Trump nor Jones has addressed or criticized — yet.

If players are made to stand, that won't end the cause and the struggle by any means. Already, the real work of contributing to, collaborating with and organizing for groups that speak out against police violence in black communities has already been unfolding off the field. It is an undertaking many professionals including Colin Kaepernick and Michael Bennett have already committed to. It would be legally and logistically impossible for the league to interfere with any of that.

Forcing players to stand for the anthem — as if they were a bunch of schoolchildren being told to behave, as if white supremacy is a "controversy" the NFL can move past by the simple act of forcing them to stand — may change the visuals, but it could not silence the movement.

Indeed, enacting a ban against the protests may give players more ammunition with which to petition their rights to kneel, undermine the value of standing and compel those on the fence to get on board. Making players stand may, if anything, put the league in a tougher position.

What would it look like if everyone were forced to stand? Bad. Very bad. But not for the players on their feet.

Given the joint statement by Goodell and the NFL Players Association, the NFL seems to be coming to the understanding that requiring players to stand certainly will not solve the NFL's problems. As Chargers offensive tackle Russell Okung told the Undefeated, "Some things are just bigger than football."