The antidote to "Nazi next door" profiles

The New York Times could take a lesson from the "Wolfenstein" game: You don't have to humanize (virtual) Nazis 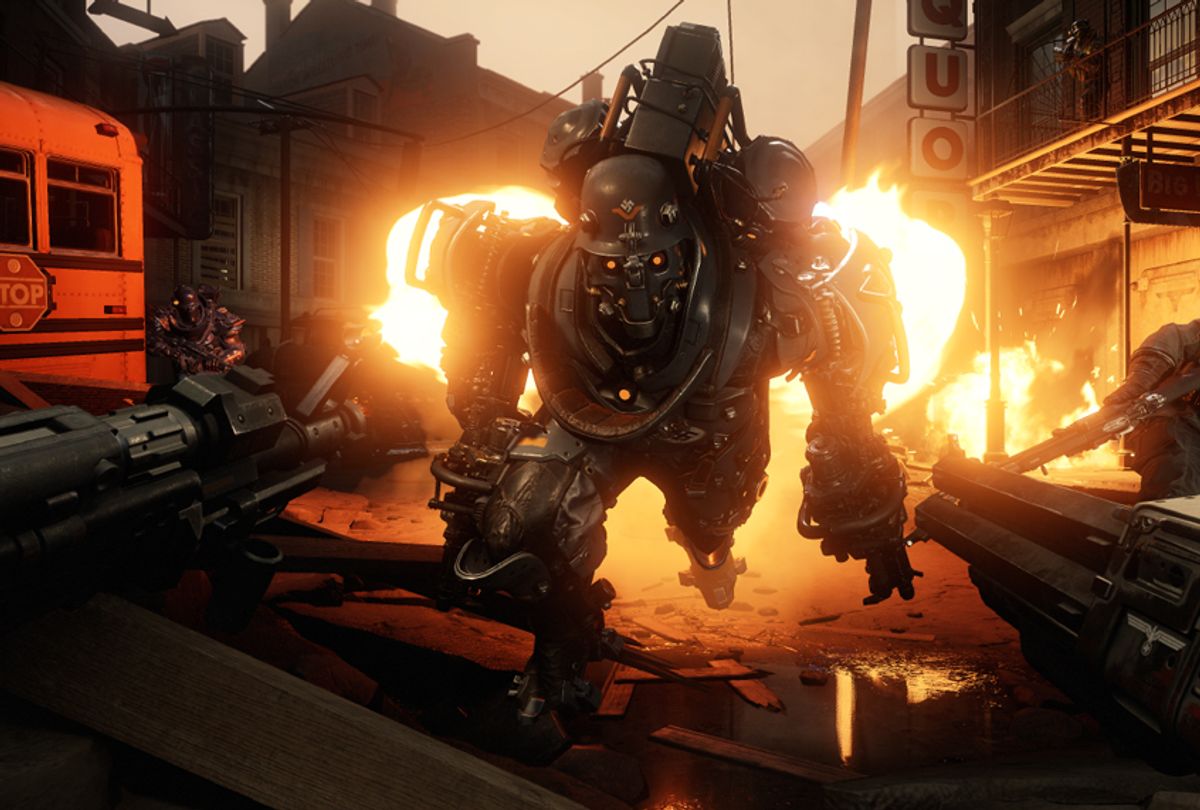 You’ve just arrived in Roswell, N.M. You’re undercover, disguised as a firefighter, whose mission is to detonate a nuclear bomb (housed in a dummy fire extinguisher) in an underground Nazi facility directly below Area 51. As you walk the streets, you notice two hooded Klan members (in full KKK attire) in broad daylight, casually chatting. The KKK run much of the U.S. now that the Nazis are in charge. Off in the distance, a Nazi parade passes. You can hear over a P.A. system: “Die Bürger of Roswell, be united. Remember our motto: One world. One future. One leader.”

A few minutes later, in a Nazi-American diner, you pull out your gun and start mowing down Nazi officers. This is the beginning of "Wolfenstein 2: The New Colossus," a new first-person-shooter video game that puts you in the shoes of a resistance leader fighting back against the Nazi takeover of the United States. And what better way to push back against the normalization of white supremacists and Nazi sympathizers than with a video game that normalizes killing (virtual) Nazis?

The “Wolfenstein” video game franchise began in 1992 — back when Nazi-killing wasn't controversial at all — with “Wolfenstein 3D,” developed by iD Software. That 1992 MS-DOS game, along with 1993's "Doom," popularized the first-person-shooter genre, in which the player takes the perspective of the character, centering the view around a gun. The 1992 game (which is now playable in your browser) puts you in the shoes of Allied spy William "B.J." Blazkowicz as he escapes a Nazi castle. After his escape, B.J. uncovers the Nazi plot to conscript an undead mutant army. The game concludes with a battle against Adolf Hitler in a robot suit (more popularly known as “Mecha-Hitler”) wielding four gatling guns.

Fast forward from 1992 to 2017. MachineGames develops “Wolfenstein 2: The New Colossus,” at a tumultuous moment in U.S. history: Tiki torch–wielding far-right rallies, a president who thinks white supremacists have valid grievances, and the rising prominence of far-right fringe figures like Richard Spencer have created a toxic cloud of Nazi-sympathizer stink lingering over America. "Wolfenstein 2" is an odd mirror on our reality: Set in 1961, yet in an alternate universe where the Nazis won World War II, “Wolfenstein 2” follows the same protagonist as the first game, B.J. Blazkowicz, as he attempts to undo the Nazi occupation of America.

It's more than just a shooter about a latent rebellion, though. B.J. Blazkowicz symbolizes a number of different American values. He protects a ragtag group of German resisters (acting under the name of the real-life German resistance group, the Kreisau Circle) and a Black Panther-esque American resistance group rescued from their hideout in the Empire State Building. These plot points solidify B.J.’s desire to protect the diverse and multicultural heritage of the United States, despite the fact that in this alternate reality, the nation doesn’t exist anymore.

Thus, “Wolfenstein 2” is a cathartic outlet for our country's current crises. The company behind the game also executed the perfect marketing scheme for its brutally violent Nazi-killing simulator. Witness this marketing video depicting a Nazi being punched in-game, accompanied by the text “There is only one side.” Does this remind you of current events?

Another tweet from the game makers directly calls out the presidency — this one features the text “Make America Nazi-Free Again" running over the video.

Beyond "Wolfenstein’s" Twitter leaning into current-day political issues, there's also marketing materials like this irreverent trailer, in which Wayne Newton’s lounge classic “Danke Schoen” plays in the background of a bloody montage of shooting, disintegrating and mutilating Nazis. What does it mean when, in 2017, a video game has a stronger condemnation of Nazis than the U.S. president?

Hidden within the game are explicit digs at contemporary alt-right and white supremacist leaders. An in-game newspaper (which you can find as a collectible) headline reads “Meet The Dapper Young KKK Leader With A Message Of Hope.” Shrewd commentators have noticed that this is almost certainly a dig on Richard Spencer, as it seems to reference an October 2016 Mother Jones article headlined, “Meet The Dapper White Nationalist Who Wins Even If Trump Loses.”

In a Rolling Stone interview with Pete Hines, vice president of marketing at Bethesda Softworks (distributor for “Wolfenstein 2”), Hines states:

Nazis are bad, and in Wolf II you get to kick their asses and it’s fun. There are actual Nazis marching openly on the streets of The United States of America in 2017. BJ would not be OK with that – we are not ok with that -- and the marketing reflects that attitude. When you have an opportunity to take a public stand against Nazis emerging in America, that’s an opportunity that shouldn’t be passed up.

Interestingly, Hines also says that the game was not intended to be a direct commentary on today’s political climate; perhaps that was a calculated political statement on his part. Still, the game is screamingly relevant, and its marketing tactics are unique for an industry that tries to play it safe (at least overtly) when it comes to politics. For instance, the original announcement trailer for Ubisoft’s unreleased game “Far Cry 5" stirred up controversy when viewers noticed how its antagonists — a cult in the heartland of Montana — resembled real-life Christian extremists. The gaming community has a reputation for harboring far-right sentiment (see: Gamergate); hence, this plot point stirred controversy. Some fans called for "Far Cry 5" to be canceled, claiming they were – as Americans – being insulted. Game maker Ubisoft could have doubled-down on the obvious – but supposedly coincidental – parallels to real-life politics; indeed, calling out the antagonistic, bigoted qualities of Christian extremists seems pretty uncontroversial. But Ubisoft instead took the easy way, denying any direct correlation between current events and its game. Avoiding this easy opening to take a stand —  despite having such a politically charged basis for a game — is frustrating in an industry that is known for being infected with sexist, even regressive cultural politics.

Which is what makes "Wolfenstein 2" so unique among video games. And while the game has a fairly normalized, surface-level machismo, in the case of the genre and subject matter, “Wolfenstein 2” seems justified in this regard. Yes, “Wolfenstein” as a series epitomizes the type of jingoism that many first-person shooters adversely portray. But it has a right to do so. To the question “Should we punch Nazis?” “Wolfenstein's” answer is: Yes, because f**k Nazis.

Lately, there's been a creepy trend of media outlets attempting to humanize Nazis and white supremacists; this was evident in the recent brouhaha over a New York Times profile of an avowed white nationalist, which took pains to describe said white nationalist's love of "Seinfeld" and paint a loving portrait of how he "sauté[ed] minced garlic with chili flakes." But "Wolfenstein" takes the opposite tack: no humanization here. Just good ol' fashioned Nazi-killing. Maybe the New York Times should take a page from "Wolfenstein's" book.