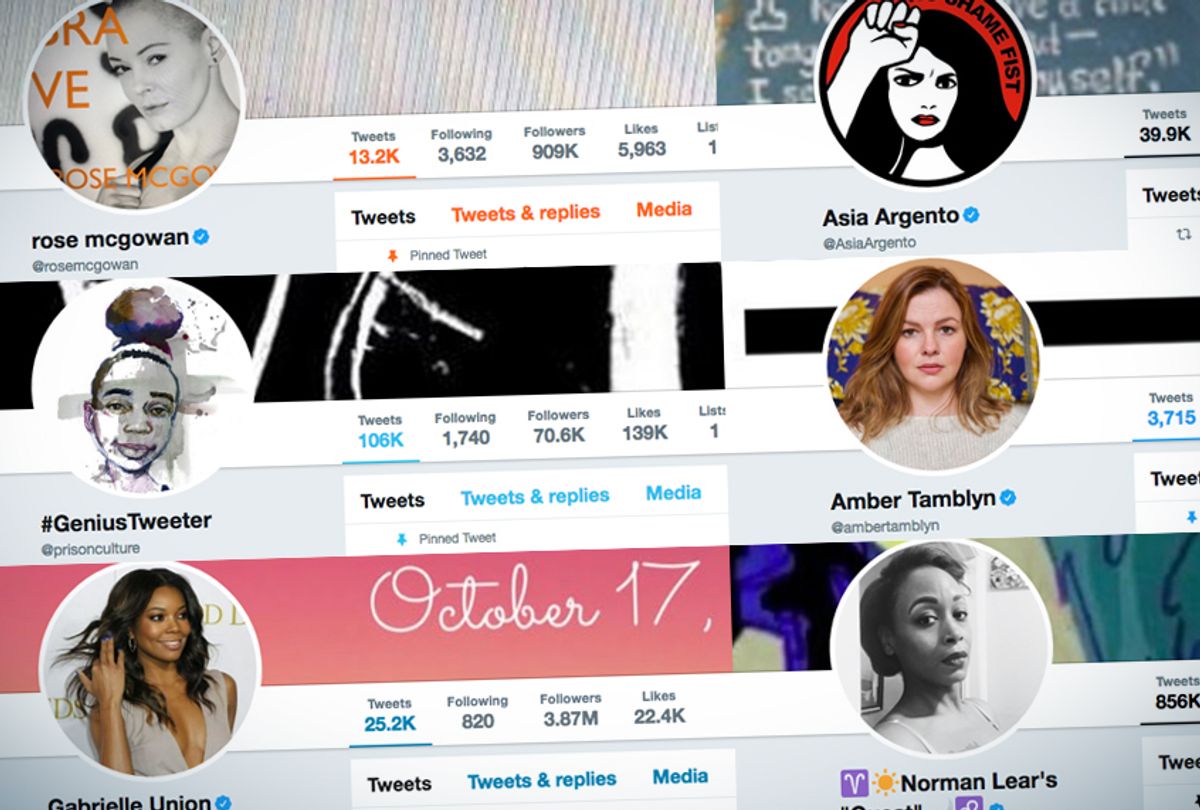 The odious figure of Harvey Weinstein will always be central to the #MeToo movement. It's the expansive accusations levied against him that broke the floodgates. But, as the creation of Time's Up has demonstrated, Weinstein and Hollywood are just the beginning the entry points for a larger, previously existing and growing movement.

While almost every woman knows how pervasive sexual harassment and assault are in both the workplace and the world outside it, the visibility of women actors coming forward and sharing their experiences has many under the impression that #MeToo is a Hollywood phenomenon. Indeed, these women have been centered in most media coverage. But when actors took the prominent women activists who fight sexual misconduct in an array of industries to the Golden Globe Awards ceremony Sunday night, the stars helped raise the curtain on these campaigners and, to a limited extent, and then left the stage altogether.

It was a critical moment as the future of #MeToo must now turn its focus to women of all statures, classes, races, backgrounds and careers in order to effect real change for all. It's a mission Time's Up isn't shying away from.

To keep on top of the progress made here, and to help expand your scope to see all the battlegrounds in this necessary fight, here's a list of some of the women (and a man) in Hollywood who were trailblazers in this movement, and the lesser-known women who've long committed their lives to stopping sexual misconduct and abuse wherever it lives.

Tarana Burke, activist and founder of #MeToo, @TaranaBurke
Tarana Burke founded the Me Too movement more than 10 years ago, and Hollywood was far from her target audience. Burke told me in October, "It’s great that it’s amplified around this issue, but this was a movement that was started for marginalized people. This was work that was started for people who didn’t have access to resources and for people whose voices were not listed when we talk about survivors."

It was black women on Twitter who corrected mainstream media and actor Alyssa Milano, who was initially credited with starting the hashtag that went viral on social media. Since then, Burke has been largely embraced by women in Hollywood and media as the movement's originator. But the importance of her voice and experience as a longtime organizer for young women of color goes beyond Hollywood's cosign. Her presence has been, and is increasingly more so, central to this movement. Bottom line, Tarana Burke belongs first on any list #MeToo pioneers.

Gabrielle Union, actor, @itsgabrielleu
Before the allegations against Harvey Weinstein, Gabrielle Union was speaking openly and candidly about her own sexual assault. As she told the New York Times recently of the conversations she's been having, "I’ve been doing it for two decades, but there were a lot more microphones this time around than there’s ever been."

Union's assault came when she was 19 and working at a shoe store, when a former employee attacked her at gunpoint and raped her. So, when Union speaks about sexual violence, she's always focused on what's happening outside of Hollywood and acknowledging the systematic problem that threatens all women. Also, powerfully and critically, Union makes space for the double oppression black women experience, always pushing for the fight against sexism to join with the fight against racism. Through her bravery, intelligence and stardom, Union is actively transforming the mainstream image of a survivor for good.

Ijeoma Oluo, writer, @IjeomaOluo
Ijeoma Oluo is a fierce feminist writer, author and editor-at-large of the Establishment. In November, she bravely tweeted a disturbing story about a prominent publication — which she later revealed was USAToday — and how they tried to get her to write a gimmicky piece about not believing in "due process" for men accused of sexual misconduct. When she offered to write a more nuanced take on the issue, the publication reportedly decided to pass.

In an article detailing the encounter, Oluo said she told the employee contacting her, "I’d be happy to write about how the fixation on 'due process' for these men was an attempt to re-center the concerns of men. How the question itself was absurd, because if there’s anything these stories show, it’s that these men in their years of open abuse were given more than just due process  —  but the women, many of whom had tried bringing this abuse to those in authority years before, were given no process at all."

Oluo closed the piece with the following questions: "How often are we manipulated into prioritizing the abuser over the abused? How often are we being suckered into a side of a debate that we shouldn’t even be having?"

Oluo is one of the less visible voices in #MeToo, but a deeply important one. In this one instance, and many others, she has been fearless in asking the hard questions. Through her social media account and writing, she always grounds the conversation and poignantly steers it back on track whenever it has been co-opted.

Terry Crews, actor, @terrycrews
Terry Crews has remained an important voice in #MeToo, both as an ally and as a survivor. His public account of the abuse he suffered on Twitter was just a launching point. He's refused to back down or be silenced since. But his advocacy has never just been about his own traumatic experience, but the search for justice on a larger scale as well.

Crews has also been fervent that men need to be held accountable no matter what, especially by other men. It may sound simple, but as Oluo's experience with USAToday illuminates, it's not easy. Crews told Time, this movement "gives his life meaning."

Really, this list is about featuring the people who are opening up new spaces in #MeToo, rather those confining it to conventional expectations of what a victim is. In a country where black men are often hyper-sexualized and rarely seen as survivors, Terry Crews embodies the inclusiveness #MeToo must maintain to make a true difference for all.

Rose McGowan, actor, @rosemcgowan
The revelation that Harvey Weinstein allegedly raped Rose McGowan helped usher in the national conversation and #MeToo movement. She's continued to be boldly outspoken toward Weinstein and others, with charged attacks against accusers and anyone she deems complicit in the system that allowed the alleged abuse to take place. Regardless of how fiery and off-target the minority of her comments may be, she's inseparable from this movement of reckoning.

Feminista Jones, author and activist, @FeministaJones
Recently, Feminista Jones wrote an op-ed pointing out the disparity in belief and support when the accuser of sexual misconduct is a black woman. She also highlighted the work black women have always put in, from Anita Hill to Rosa Parks, in advocating for and fighting for victims of sexual violence. Long before #MeToo ever went viral, Jones started the hashtag #YouOkSis, which spoke specifically to the violence, sexual and otherwise, that black women have experienced. Her voice should be on your feed.

Alyssa Milano, actor, @Alyssa_Milano
Alyssa Milano resurfaced the #MeToo hashtag that Burke founded and opened space for many girls and women to disclose their experiences of sexual harassment and assault for the first time on social media. The power of is the ability for people to connect with other survivors who can relate, support and listen — Milano was essential in helping that happen and has been vocal and active in #MeToo and Time's Up since.

Raquel Willis, organizer and writer, @RaquelWillis_
When #MeToo was just beginning, Raquel Willis highlighted the way many participants were neglecting the massive problem of sexual violence against trans women. In her article titled #UsToo, she advocated for a more inclusive movement, saying, "Transgender and gender nonconforming people are rarely given the space to discuss the sexual violence that we face partly due to damaging notions of us as being predators ourselves or the idea that we’re not desirable enough for anyone to commit an act like that against us." If #MeToo is truly a women's movement, trans women cannot continue to be left out. Willis is here to remind us all of that.

Amber Tamblyn, actor and director, @ambertamblyn
Through articles for the New York Times, her Twitter feed and work with Time's Up, Amber Tamblyn continues to be a leader in the #MeToo movement. Tamblyn has remained steadfast, persuasive and focused, an important lodestone in a movement that is always at risk of co-option, confusion and dissipation.

Jenna Wortham, writer, @jennydeluxe
Jenna Wortham's writing on race and gender is always important and evocative. Her coverage of #MeToo is no exception. She was pointedly critical of the low-risk factor involved for the famous, conventionally attractive, rich, white actors who wore all black to the Globes, a move that has little consequence and perhaps even less effect on anyone outside of Hollywood. She also always sheds light on the neglect of women of color in this space and other "women's movements."

Asia Argento, actor, @AsiaArgento
Asia Argento was another early accuser of Harvey Weinstein, and her unflagging openness demonstrates a rare and inspiring bravery. She came forward when many women were still afraid to, helping to fuel the larger conversation and movement.

Mariame Kaba, organizer and educator, @prisonculture
Mariame Kaba is a champion of girls' and women's rights, with a focus on those who are of color and incarcerated. Given the fact that the overwhelming majority of incarcerated women are victims of sexual violence, Kaba makes sure the women who are most marginalized are not left out of the conversation.

Monica Ramirez, activist, @monica_promumi
The letter in solidarity from Time's Up began as a letter in response to the Alianza Nacional de Campesinas (the National Farmworker Women's Alliance), the organization that originally crafted a letter in solidarity toward women in Hollywood signed by 700,000 women farmworkers. Monica Ramirez is president and co-founder of that organization and a tireless worker who, thankfully, got a little extra boost when Laura Dern brought her to the Globes.

Brittany Packnett, educator and activist, @MsPackyetti
Before #MeToo went viral, Brittany Packnett started a different hashtag: #BlackWomenAtWork. Intended to create a space for black women to speak openly and honestly about their trials in the workplace, it helped open up a conversation that has long been done in private whispers rather than public declaration. Packnett has also been fervent in her criticism of R. Kelly, highlighting the fact that he continues to enjoy a strong career, despite mountains of sexual-abuse allegations from black girls and women, while other celebrities who abuse white women are increasingly met with punishment.

Saru Jayaraman, activist, @SaruJayaraman
Saru Jayaraman is another activist who attended the Globes, in part because of her sustained fight for workers' rights in the restaurant industry, a place that has been rife with abuse and the source of many sexual misconduct allegations. As well, she is the president and co-founder of Restaurant Opportunities Centers United, which aims to raise minimum wages and labor standards.