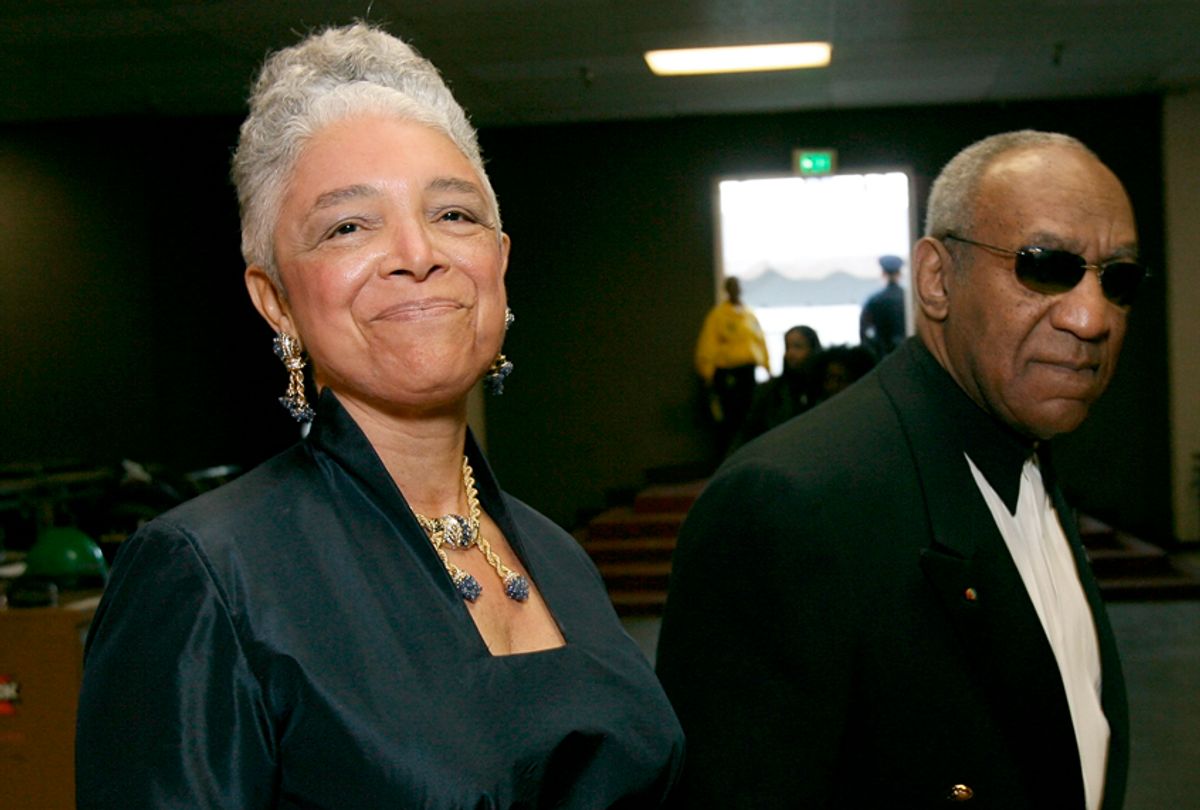 A recent and sobering conversation with a male relative reminded me of how potent a hypnotic agent the combination of fame and history can be. The topic, of course, was Bill Cosby’s conviction.

Citing the witness testimony of Janice Dickinson, my relative opined “Well, she lied about her encounter with him in her book. And that makes me wonder, how many of those other women lied?”

Never mind the bizarre arithmetic behind that logic, the idea that a massaged account in a celebrity’s memoir could taint the veracity of five dozen other women, the majority of whom aren’t famous and stand to gain little from coming forward.

Never mind that in 2002, when the memoir was published, Cosby had far more pull in the media than Dickinson, who was still a year away from scoring a gig on “America’s Next Top Model.” At that point Dickinson could have been easily relegated to Hollywood’s version of the Phantom Zone for even implying Cosby had touched her without his consent.

That one version of one event out of 60 was enough for a man I’ve seen display concern and care for the women in his life to give Bill Cosby the benefit of the doubt over the testimonies of Andrea Constand and Cosby’s other accusers.

For a moment my jaw dropped. Just a moment, though. Because in truth, I’ve had a version of this conversation before with another male relative, albeit one infinitely more misogynistic than the first.

That exchange happened more than 25 years ago, on the occasion of Mike Tyson’s conviction for raping Miss Black America contestant Desiree Washington. Washington was 18 years old at the time and a pageant contestant, and the case angered my sibling, you see, because it was obvious to him that Tyson was innocent. Any woman who accompanies a man to a hotel room, he fumed, “knows exactly what she’s getting into.”

That probably wasn’t the first demonstration of the upsetting notion that a portion of people in the black community hold famous black men accused of terrible wrongdoing in a higher regard than their accusers, including black women like me. But it was the most memorable because it was the first time I realized that my impulse to believe the women in these cases was far from universal.

Then, and now, the Mike Tysons, Bill Cosbys and Robert Kellys of the world can count on a contingent of fans, black and white, that equates the quality of their art and their talent with a goodness that cannot be questioned. High-profile, wealthy African-American men will always be juicy targets for corrupt cabals seeking make examples out of black heroes, because racism.

And now enters American citizen Camille Cosby, lending her voice to this disaster.

On Thursday, Cosby’s wife, manager and spin doctor released an official statement via a Facebook post, likening her husband’s conviction to the lynching of 14-year-old Emmett Till and the wrongful conviction of Darryl Hunt, found guilty in 1984 for the rape and murder of a woman only to have DNA evidence lead to his exoneration in 2004.

“These are just two of many tragic instances of our justice system utterly and routinely failing to protect African Americans falsely accused in so-called courts of law and the entirely unfair court of public opinion,” Camille Cosby bloviates, adding that “unproven accusations evolved into lynch mobs.” From there she laments the cancellations of her husband’s performances, the rescissions of honorary degrees and worst of all for Camille, the likely end to the syndication of “The Cosby Show.”

"Once again, an innocent person has been found guilty based on an unthinking, unquestioning, unconstitutional frenzy propagated by the media and allowed to play out in a supposed court of law,” she writes. “This is mob justice, not real justice.”

Good lord, if Camille Cosby's diatribe doesn’t produce a new level of extra-special feels! So, so many.

Not only does she wrap her husband in the shroud of constitutional violation; not only does she instruct her husband’s fans that “this tragedy must be undone not just for Bill Cosby, but for the country,” she invokes the image of lynching, reducing Bill Cosby’s accusers, some of whom were teenagers when he allegedly assaulted them, into a mob.

Certainly it’s tempting to dismiss this statement as an unscrupulous last stand of a woman on the verge of saying goodbye to the good life. But on top of exemplifying an atrocious level of selfishness (and self-preservation), this statement is an exploitative, dangerous betrayal of black Americans and of women — specifically, and perhaps most egregiously in my book, black women.

The Cosbys’ moves over the last three years demonstrate their willingness to cash in on the comedian’s place in history, his significance as a role model to black Americans of all ages. In turn, he’s been more than willing to throw his own people under the bus to serve his respectability agenda, anointing himself black America’s moral exemplar and receiving praise from blacks and whites alike for doing so.

And they’ve had no problem holding up Bill’s reputation as a philanthropist and champion of education to gain them support among black people. Nor do they have qualms over using history as a shield.

Even when there are scores of witnesses with similar stories of misconduct, even when these violations have altered so many lives, a history brimming with the injustices suffered by black men means we must believe in Bill Cosby’s innocence.

Because Cosby holds an important place in that history. So do thousands of black Americans who were actually lynched between 1877 and 1950, a horror memorialized this week in Montgomery, Alabama, in the form of National Memorial for Peace and Justice. Many of those victims were black men. Bill Cosby is also a black man. If X, therefore Y.

Camille Cosby probably didn’t intend to find herself in the company of R. Kelly or Kanye West, both of whom also employed lynching rhetoric to call fans to their defense. But there they are, peas in a poisoned pod.

Some people are cheering her statement as classy, the work of a “ride or die” woman standing by her man despite knowing about a string of infidelities spanning decades.

Say what you will..Camille Cosby has always been and will always be a class act. #imwithher

Camille Cosby is paper bag colored, looks 20 years younger than she is, has style, is always classy, is rich, is married to one of the most powerful black men ever, and has proven to be faithful and dedicated. She also isn't riding with the #MeToo. She's an easy target. — Mark S. Garvey (@MarkSGarvey) May 3, 2018

Incredibly, a number of women consider these assaults to be the same as Cosby’s consensual extramarital sexual encounters.

why is there not more support for #camille #cosby she has been loyal and has been so reserved. Is there anybody who else is sees that the 60 plus women got all the attention but none for his wife at home! The 60 women knew they were sleeping with a married man! #audacity #done — Ms. Monopoly, the Landlord (@JessicaLynnSco) April 26, 2018

In a 2014 statement, Camille Cosby painted her spouse’s growing number of accusers as “individuals and organizations whom many in the media have given a pass.”

But invoking the specter of lynching to win sympathy for her husband denigrates the memory of the innocent men, women and children who were butchered by racist mobs. Cosby is an 80-year-old rich man, not a 14-year-old boy dragged out of bed in the middle of the night and murdered on the basis of a lie.

None of those 4,000 victims benefited from decades of TV exposure, an expensive legal team and thousands of white fans like the one who, in his response to Camille Cosby’s post, explains that he believes her husband because “I grew up with him on TV. He’s always promoted wholesome values.”

Would these same people give a similar benefit of the doubt to men who aren’t famous but also face multiple accusations of assault? How about black men killed while, say, standing by their cars or using their cell phones in their backyards, men whose deaths actually do bear some resemblance to lynchings?

Hidden within all this posturing is Camille Cosby’s central demand for a criminal investigation to be opened that targets Montgomery County District Attorney Kevin Steele and “his cohorts.”

“This is a homogeneous group of exploitive and corrupt people, whose primary purpose is to advance themselves professionally and economically at the expense of Mr. Cosby’s life,” Camille Cosby writes.

One member of that “homogeneous group of exploitive and corrupt people” she railed against in Thursday’s statement, Kristen Gibbons Feden, is a black woman who earned her legal degree at Temple University. She’s precisely the brand of black excellence the Cosbys used to gain credit for supporting through their financial help or by the example set by Clair Huxtable on “The Cosby Show.” Bill Cosby’s TV daughter Keshia Knight-Pulliam publicly supported Cosby because he “has been so generous . . . has been such a philanthropist and giving back millions of dollars to education and schools.”

I wonder how men like my aforementioned male relatives feel about Feden.

I also wonder where Camille Cosby stood with regard Mike Tyson’s rape trial in 1992. Especially the publicity stunts leading up to it which, among other noteworthy events, included Jesse Jackson saying a prayer over Tyson — not the victim, the rapist — prior to his day in court.

Maybe that’s not fair. That trial has nothing to do with Camille, or Bill . . . save for the detail that their daughter Erinn Cosby accused the boxer of assault back in 1989. She went public with her account three years later in multiple outlets, including the Washington Post, where the story resurfaced in 2016. “When Erinn Cosby told her father," the Post article states, "the comedian’s attorneys got in touch with Tyson’s representatives and insisted that he attend psychiatric counseling, she said on ‘Donahue.’”

A month after Erinn Cosby says the assault took place, Bill Cosby told the Los Angeles Times, “She’s not a person you can trust,” adding that at the time they were estranged. The Post article does not mention any statement from Camille Cosby. Who knows why? Maybe it was too risky for her to speak out in support of another black woman going public with an allegation of sexual assault, even if that woman happened to be one of her own daughters.

This is not a matter of battling mob justice, but an unearned demand of blind loyalty to a man from an opportunistic woman.

A woman cognizant of the ugly fact that men tend to trust the word of the powerful men they admire over women who have been victimized, and somehow push through their trauma and speak out.

Camille Cosby has a vested interest in drumming up support for her husband’s claim of innocence that benefits nobody in the country except for Camille and Bill Cosby. The legal cost of appealing the Constand verdict won’t be cheap. On top of that, more women have civil suits pending against him.

Camille Cosby is a woman who in 2015 was quoted as saying to confidantes, “I created him, I knew what I was getting and we’ll fix this.”

Looking back, I wonder if she really knew exactly what it was she was getting into, and that she’d be so demonstrably ill-prepared to dig her way out.

No matter — I know at least two guys who are ready believe her side of the story.