"Where is Ivanka?" Meghan McCain asks on "The View" amid child separation crisis at the border 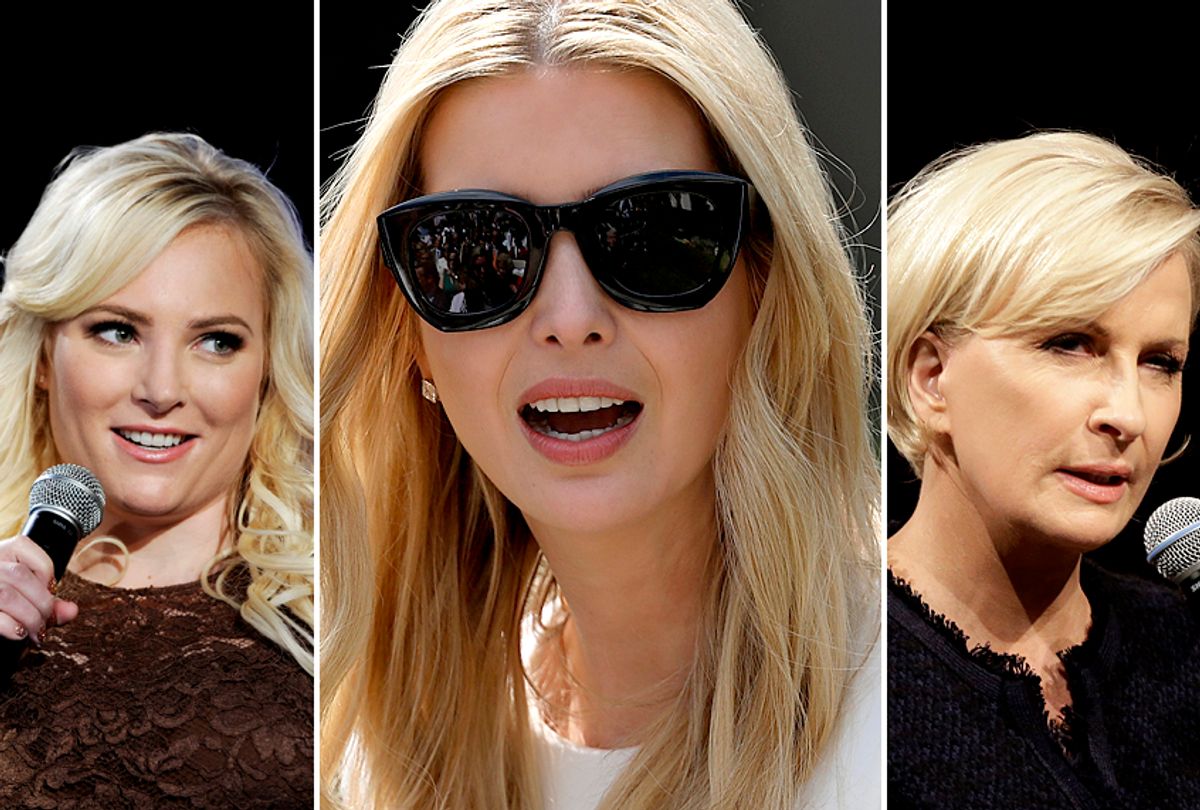 While the humanitarian crisis on the border heats up as a zero-tolerance policy initiated by the Trump administration allowing young children to be ripped from their parents remains in effect, one prominent White House official has been mysteriously silent. Now, "The View" co-host Meghan McCain wants to know where she is hiding.

"Where is Ivanka in all of this?" McCain asked pointedly during the opening segment of the ABC talk show on Tuesday.

True to McCain's words, President Donald Trump's daughter, who also serves as a senior White House adviser, has not yet publicly addressed the crisis.

Ivanka Trump did, however, make time to tweet a photo of her as a young child in her father's arms – an image that stands as a stark foil to the photographs of crying children who have been separated from their parents at the border. On Instagram, Ivanka Trump also shared a photo of husband Jared Kushner and herself, together with all three of her children, smiling in the safety of the White House.

Many on Twitter criticized her social media posts as "tone deaf." Mika Brzezinski, the co-host of MSNBC's "Morning Joe," called the Trump administration's policy effective kidnapping. And she dedicated an entire monologue on Monday's show to calling Ivanka Trump out.

"This is a story about women and their vital role as mothers, and when you have babies being taken away from their mothers, you have to ask why the counselor to the president — who was brought in to help the president perhaps create good policies surrounding women, parental leave, domestic policies that are important to women in this country — you have to ask why Ivanka Trump is so tone deaf to post a picture about her special day yesterday with her daughter?" Brzezinski stopped her show to ask.

The "Morning Joe" star stated that Ivanka Trump had once again missed the mark "every step of the way."

"Because this is about who we are as a nation. It's also about women and their vital role as mothers," she explained. "And we're losing every every step here. We're losing a sense of who we are, and it's wrong."

Brzezinski concluded her remarks by acknowledging the need for "stronger voices" in the White House to stand up for women and girls.

Nearly 2,000 children were separated from their parents between April 19 and May 31, according to the Department of Homeland Security.

For her part, first lady Melania Trump weighed in indirectly though a spokesperson against the policy instituted by her husband's attorney general, Jeff Sessions.

Invoking rhetoric recently used by Samantha Bee, comedian Kathy Griffin, who was previously criticized for posing with a photo of a fake severed head of the president, responded by calling Melania Trump a "feckless complicit piece of sh*t."

Tuesday at "The View," co-host Joy Behar wondered aloud whether such a policy would exist if the families were white. “If these were Norwegian kids, would this be happening to them?" she asked.

"Probably not," co-host Sunny Hostin responded, before clarifying the administration's false claims that it was up to Congress to act to reverse the policy.

“What’s strange to me is that everybody’s talking about Congress now passing some sort of bill that will end this policy," Hostin, who is also the senior legal correspondent for ABC News, said. "This president can end this policy right now. All he needs to do is say, 'We are not going to do it, period.' Jeff Sessions, quite frankly, can end the policy right now — the policy that he announced."

McCain interrupted with the scary truth.

“But they’re not going to, so we have to rely on people like Ted Cruz," she said.

Yes, one of the most far-right and toxic members of the Republican Party is stepping up to introduce new legislation that would bar families who are stopped at the border from being separated

“Laura Ingraham may be one person, who yes, has a primetime show, but she doesn’t certainly speak for the entirety of the Party," McCain continued. "There’s a lot of outrage. And, when you’re seeing people like Bill O’Reilly, Ted Cruz, Laura Bush — these are hard-right figures within the party and commentators coming out and saying this is wrong — you’ve got a PR crisis."

You can watch the full segment from "The View" right here: