From true-crime haven East Peck to Purgatory, here are the top five TV destinations for the week of July 15 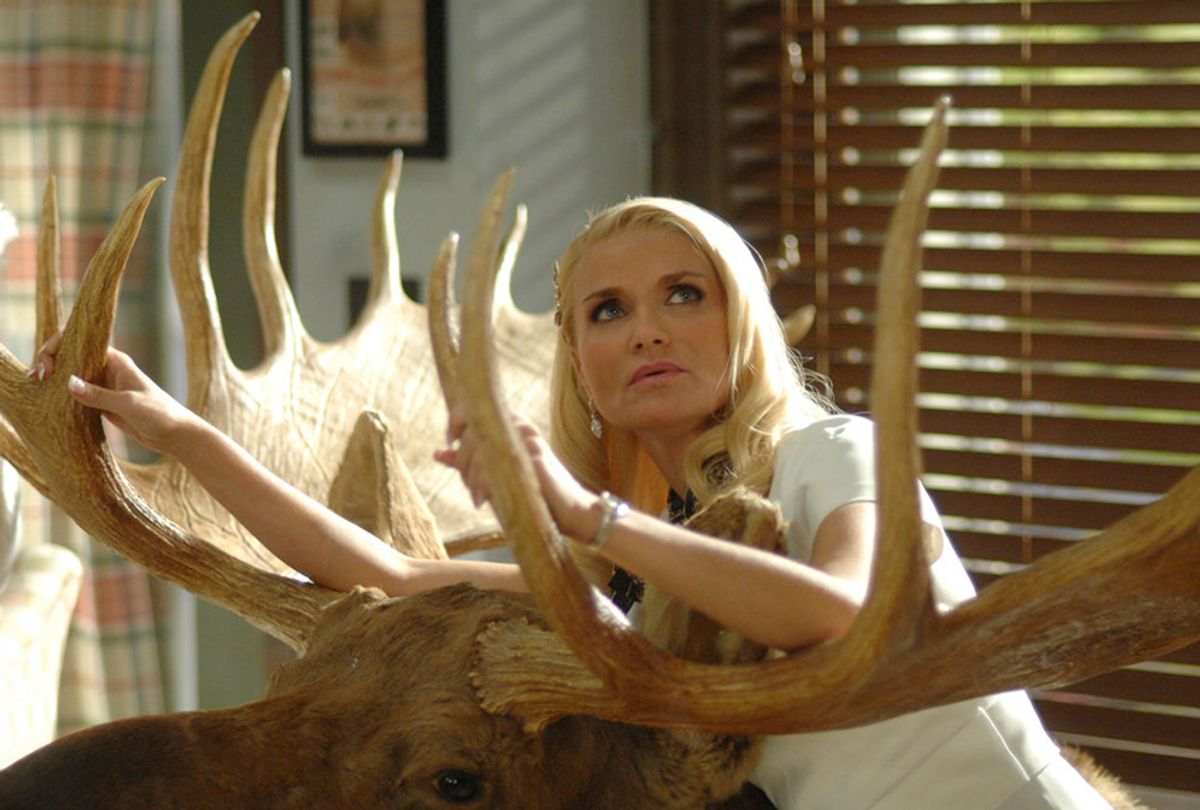 You may have gotten the sense lately that we’re heading to Hell in a handbasket. Spoiler alert: We are! No question! Days from now, in fact, demons will walk the streets, and the damned will roll into a small town and overtake the place. I have seen the signs. It is coming.

To clarify, I’m referring to the list of shows premiering next week.

Mind you, I can’t promise that the terrors I just mentioned won’t come to pass; normalcy is now considered to a luxury enjoyed by past generations driven extinct in 2016.

The silver lining in this: Abnormality brings out the best in our comics and satirists, making this era ripe for Sacha Baron Cohen’s return to television. In case you haven’t heard, Baron Cohen has sent conservatives into a tizzy with his teases of his Showtime series “Who Is America?” which began dropping without warning at the end of June.

The most outspoken rubes announcing to the world that they’d been gulled by the comedian, Sarah Palin and Alabama judge Roy Moore, gave Baron Cohen and Showtime plenty of free publicity this week, leading up to Sunday’s 10 p.m. on-air premiere.

The promise of their appearance doesn’t hold a candle to the whale of an interview Baron Cohen and his team landed, with none other than former Vice President Dick Cheney. Teasers feature him autographing what he believes to be a waterboarding kit.

Hopefully this isn’t one of those cases where the hype is better than the actual product, because it certainly has been a hoot to behold Palin's panic from the sidelines. We’ll all find out together since Showtime didn’t release any previews to critics.

READ MORE: That viral “strangers on a plane” Twitter story: Not a rom-com but a horror show

Oscar Wilde opined that we make this world our hell, but let’s face it — some of us are born into it. The seventh episode of this pitch-black dramatic comedy, “Austerlitz,” follows the most evil family in Manhattan, the Roys, on a supposedly healing retreat to the Southwest at the behest of its paterfamilias Logan (Brian Cox).

Following a botched coup orchestrated by the empire’s heir apparent Kendall Roy (Jeremy Strong), the idea is that father and children will come together at the ranch of eldest son Connor (Alan Ruck), engage in some counseling and emerge renewed and bonded.

And that’s exactly the sort of logic a man who never prioritized his relationships with family would employ.

As one might imagine, this brief escape from New York goes terribly, but the failed attempt to exorcise the brood’s demons only brings out the best in the cast. This is especially true of Sarah Snook’s scheming daughter Shiv and Kieran Culkin who, as devil-may-care son Roman, takes the concept of schadenfreude to delirious new heights with every episode.

Smartly executed camp is a beautiful thing, and in the new season of this true crime spoof Kristin Chenoweth ("American Gods") shows us how it’s done with this parody of “The Jinx: The Life and Deaths of Robert Durst.”

Chenoweth plays the vivacious and empathy-free Lavinia Peck-Foster, the image-conscious and manipulative matron of East Peck, who may or may not have killed her husband.

Regardless of her guilt or innocence, the Peckers (yes, that’s what they call themselves) are eager to lap up any attention she throws their way, and she seizes every available opportunity to use the attention afforded from being a murder suspect in a small town.

The joy of “Trial & Error” is its unyielding commitment to ridiculousness, with a script that machine guns the audience with every manner of pun and lewd double-entendre that Standards and Practices allows them to get away with. Chenoweth is all spun sugar and sunshine, an approach she’s perfected over a long career. But there's something sinister about Lavinia, and Chenoweth lets slip a few crumbs of predatory menace every now and then.

But weren’t we talking about Hell? Yes, we were.

John Singleton’s grueling examination of the crack cocaine epidemic’s rise picks up in 1984, with whatever innocence Franklin Saint (Damson Idris) possesses nearly gone. That’s what happens when an enterprise turns into an empire, a conundrum examined in any number of films about borderline decent people getting pulled into a criminal business and discovering how good they are at doing bad things.

A main criticism of season 1 was its uneven handling of the story’s numerous storylines, primarily ones involving the Latinx characters, at its outset.

But when the opening episode of season 2 picks up in the middle of the holiday season, it becomes clear that the writers have streamlined enough story threads to make the narrative more coherent. “Snowfall” gets dark but the producers use its tensions to grip the audiences as opposed to oppressing us. Franklin and the people he loves may be on their way to a hard fall from the clouds, but as this new season begins, the trip is fascinating.

This woman stands between us and Hell as surely as fine whiskey stands between her and sobriety. There’s a lot to love about Purgatory’s resident protector, the gun-slinging heir to Wyatt Earp portrayed with a ragged insouciance by Melanie Scrofano. Wynonna is our kind of lady, a hard-drinking demon slayer who owns her strengths and most of her shortcomings, and her close bond with her sister Waverly (Dominique Provost-Chalkley) gives her character a warmth and light that makes her more than a two-dimensional demon slugger.

It’s very simple to dive right into this series at the top of the season. But to sweeten the pot, the season 3 premiere is an especially tongue-in-cheek ode to a certain TV title from which “Wynonna” draws significant influence, as well as the attendant subgenre to which it belongs. Simultaneously paying homage and ribbing its indulgences, the premiere is this show’s way of rolling out the welcome mat to newcomers in a spirited way while setting up what appears to be a dire threat. But this is Purgatory — every threat is dire. Fighting them is the fun part.

This show’s limited but devoted fanbase has been kept waiting for its second season follow-up since 2016. . . and for no good reason, really. There are business reasons, but whatever — all we know is that it aired in Britain more than a year ago.

Admittedly Robert Kirkman’s dive into the occult moves a lot more slowly than “The Walking Dead,” but the first season steadily built its demon war without tipping its hand. Following the spirit of classic horror, there are just as many chills to be experienced in what we don’t see as there are in its haunting visions of possession, many of them genuinely stomach-turning. One such quietly horrific moment leaps up within moments of the second season opener; it’s mild in comparison to most horror shows, but it’s also quiet and unexpected, and that makes it worse. And it only gets tougher to watch from there on out.

This slow boil approach yields poignant, aching performances from a cast that includes the late Reg E. Cathey as the morally solid chief of police, the extraordinary Philip Glenister as the town’s combative reverend, and Brent Spiner, loading his outwardly pleasant demeanor with a foul malice.

Patrick Fugit holds the center of the drama as the reluctant hero who stands between the humans in his small town of Rome, West Virginia, and total damnation. It’s a weight the actor makes tangible for the viewer, but it’s not soul-crushing. That makes all the difference.

A horror tale that feels real