The joys of hate-reading the rich: Why raging over a wealthy intern's money diary feels so good 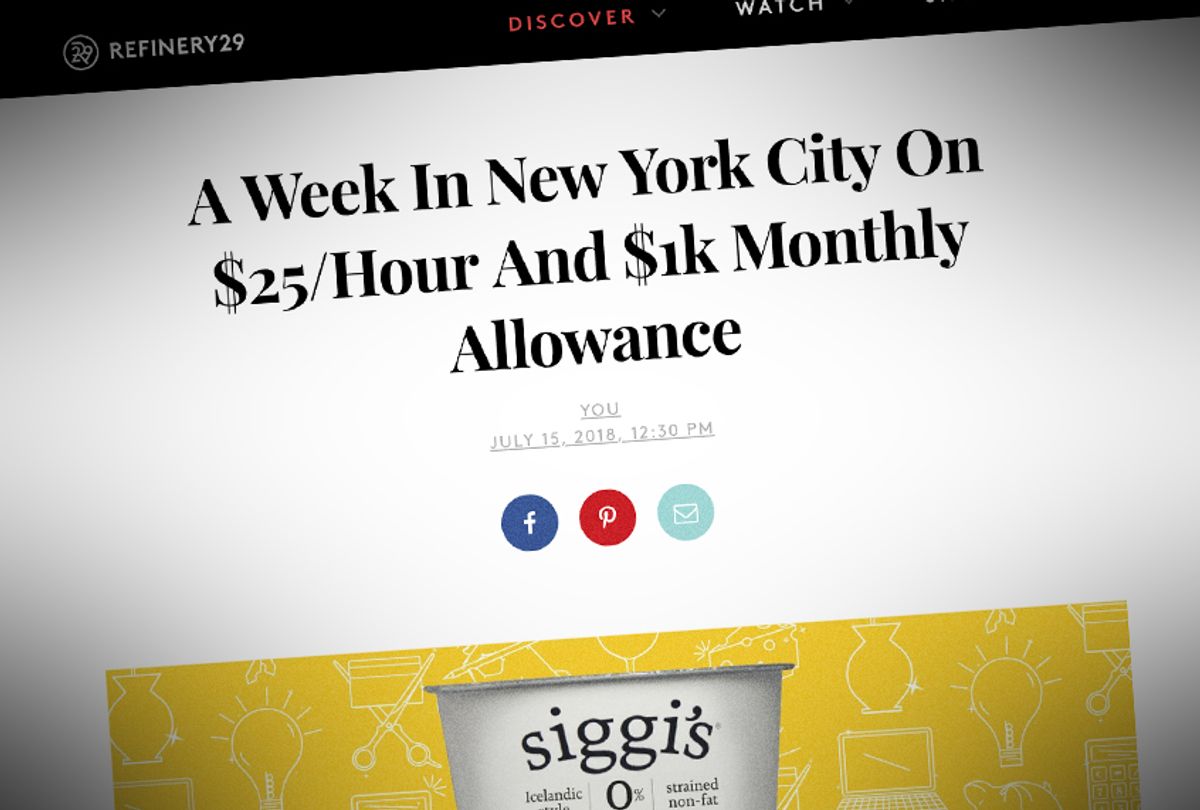 The hate read is the textual equivalent of drinking Malort. You know it's going to be bad, you know you're going to be disgusted with both it and yourself, and yet, there you are again, determined to power through this hell of your own making.

Of the many forms the hate read can take — "Old White Man with Opinion on Issue that Doesn't Pertain to Him," "Enemy of Feminism Who Happens to Be a Woman," "Why Science and Medicine Are Bad But Crackpot Nonsense Is Good" — the "Day in the Life of Blissfully Unselfaware Wealthy Person" is one of the most surefire clickbaits around. This week, we got a strong contender for the next round of the hate read bracket with a Refinery29 Money Diaries featuring "A Week In New York City On $25/Hour" — a headline that the editors later amended to include "And $1k Monthly Allowance."

The Money Diaries — which Refinery29 does not pay its contributors money for — rests of a simple premise: "Log your spending over seven days and report back to us all of the details." The entries span a range of locations and incomes: "A Week In Wilmington, DE, On A $39,728 Salary," "A Week In Singapore On A Joint $919,216 Income." They're an intimate journey through a week in an anonymous woman's life, viewed through the lens of her spending. They're also, as the New Yorker's Carrie Battan described it last year, "where millennial women go to judge each other's spending habits."

And sometimes, that woman is a 21-year-old marketing intern whose parents give her $800 a month and pay for her rent, insurance and education. Additionally, she says, "My grandpa also wires me $300 every month (#blessed)." Her roommate, who sleeps in the den, meanwhile pays $1,950 in rent.

Were you to create a parody of what The Olds think millennial privilege looks like, circa 2015, you'd write this entry. Our heroine consumes avocado toast, açaí bowls, rosé and $7 cold brew coffees; she "sits around and does nothing" at her office; she goes to hot yoga and the Hamptons. She has a "girl squad" and she "chills." She "reconsiders taking adaptogens and applying essential oils." Over the course of one week, she references six avocados, two Ubers, four Lyfts, three Venmos, two vegan meals, three things she describes as "random" and one yogurt vomiting incident.

If the whole thing is eventually unmasked as a massive troll, no one will be surprised. Yet what's definitely authentic are the guillotine-sharpening emotions that the diary — and other stories in its genre — inevitably provide. The self-disclosing clueless rich person narrative has given us some truly astounding fuel for fury over the years. Come with me, won't you? on a little stroll down money hate-read memory lane.

There was the excitingly titled "We Bought a Crack House," in which a Toronto woman described the epic struggle of renovating a 9,000 square foot home in a rundown neighborhood. All it took was a million dollars and kicking out the squatters. "At the top of the stairs, we saw two people sitting cross-legged on a mattress," the author wrote. "'Hi, we’re the new owners,' Julian said, cheerfully. My designer friend leaned in. 'They are smoking crack,' she whisper-hissed. I pulled my son close and shouted at Julian: 'Get us out of here!'" Man, the cleansing rage you feel reading that one— and seeing the photos of the clawfoot tub and Eames chairs — is like a colonic for your psyche.

There was "I’m Not Going To Pretend That I’m Poor To Be Accepted By You," in which a young woman who "grew up with a decent amount of money in a decently rich area" railed against the Gristede's checkout girls for — I am not kidding — discussing their state school educations in front of her, and then having the audacity to not smile at her. A mere month earlier, the same publication had blessed us with "Being Privileged Is Not A Choice, So Stop Hating Me For It," written a different young woman angry about "justifying my address and the backlash I receive when I tell people I am a student and live in a high-rise apartment."

The New York Times is perhaps the world's most reliable source of high quality rich person hate reads, most recently last month's "Tech Elites Recreate Burning Man Inside Their Living Rooms." Honestly, if you could get past it description of "so-called songversations, emotion-heavy gatherings that combine philosophical rap sessions with improvised music, run by a ukulele-strumming songstress who describes herself as a 'heartist," and not immediately go out and burn stuff down, you are either a bigger person than I or a "tech elite" who enjoys "rap sessions."

Each time a story like this appears, a collective growl of class resentment can be heard across the land, doubly loud if the focus happens to be on women — flaunting their designer "sunnies" and their GOOP-endorsed lifestyles.

So naturally, the young intern's Refinery29 diary was immediately ushered into this pantheon, where it became an instant classic of what one person described on Twitter as "A Week In New York City On $25/Hour and Generational Wealth." The takes followed, hot and fast, with Slate skeptically calling it "preposterously full of millennial cliches," while Vice declaring it, "good, actually," and wondering if perhaps now "the intern has considered her place in the world and what she might do with her privilege." If this lady is for real, I'm less hopeful about that. But I agree peering behind the monetary curtain, even if what lurks there makes you queasy, has value.

Maria LaMagna writes this week in MarketWatch of her own vastly different experience of moving to New York with "steep student debt and initially . . . no full-time job," and of how these honest accounts of people getting by on Mom and Dad's dime serve a purpose beyond mere class resentment. "Not every young person making it 'on their own' or starting their new business 'from scratch' is so honest," she writes. "We know these privileged (or as the Money Diarist put it, #blessed), young adults are out there. But how often do we get to actually hear from them?" She adds, "If there’s something to criticize, it should be the low pay or no pay that some companies often give interns, which makes it impossible for people with lower incomes to hold those positions."

This spring, my college bound daughter interned at a company run by a smart young person who was born into a wealthy media family. The company is staffed by many of this individual's college classmates. It was eye-opening for my public school kid to be surrounded by colleagues not much older than she is who can charge smoothies on their black cards and swim in their high rise building's pools. In a few years, those kind of people will be her coworkers, and she may find herself painfully aware that she can't afford the same Sweetgreen lunches and Brazilian sugaring sessions they can. Like LaMagna, I'm okay with her knowing why.

The age-old keeping-up-the-Jones scramble has created a myth of meritocracy. It makes people feel bad for not having more — nicer clothes, weekends that don't involve just Netflix and going for walks — especially when everybody appears to be making the same salaries. (I started my own career in the nonprofit world, a field bursting with men and women who can afford to be paid horribly, so I know.) When you see how ridiculously the deck is stacked, and how blithely ignorant of their advantages the elite so often seem to be, yeah, it's enraging. But in the rubble of that rage, there's reassurance as well. Why do some people seem to have it better? It's not because you did something wrong. It's because they just have more. And they got it from their parents.

How younger women are shaking up the workforce