Latest "Mission: Impossible" movie is a familiar exercise in action and plot mechanics. Isn't that the idea? 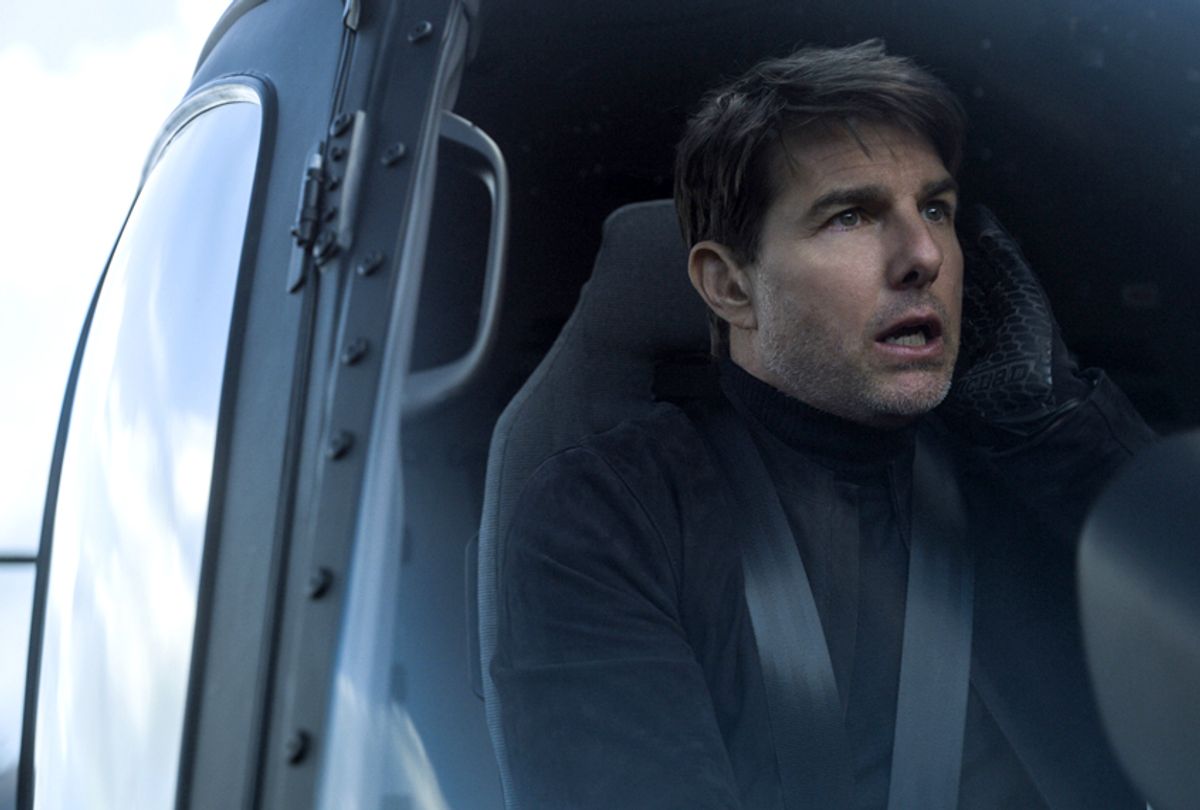 When a movie is as predictable as "Mission: Impossible -- Fallout" — or, for that matter, any other installment in the "Mission: Impossible" film series — perhaps the best way to review it is to break it down by the elements. As with the James Bond or Jason Bourne series, the entries in the "Mission: Impossible" franchise are practically interchangeable, which perhaps contributes to the franchise's longevity. (Tom Cruise has played series protagonist Ethan Hunt since 1996, an impressive feat.) That also requires each individual film to be self-consciously formulaic in the process. Say what you will about "Avengers: Infinity War," but at least its story took risks. "Fallout" offers a highly predictable form of fun -- although it's still fun.

There is a lot to like about this plot, which unfolds in a way that makes our journey feel uncertain even if its destination is never in doubt. Most notable, of course, is the craftsmanship of the action sequences and stunts, with special props belonging to Cruise himself here. If you're a connoisseur of the action genre, you won't get better bang for your buck, whether from something as seemingly simple as a foot chase (for anyone who loves poking fun at how Cruise always seems to run in his movies, you'll have ample material here) or as elaborately choreographed as a deadly in-flight battle between two helicopters.

Cruise's supporting cast is as charming as always, especially Rhames and Pegg, and they manage to transcend McQuarrie's dialogue, which is often more concerned with moving the plot machinery forward than with adding any distinctive flair to it. This movie is also entirely accessible, with a story you can easily follow whether you've seen every previous "Mission: Impossible" movie or have never heard of the franchise before. That is particularly refreshing in our pop-culture era, where half the fare playing at any given cineplex requires audiences to hold dissertation-level expertise in the convoluted mythology of some established or emerging cinematic universe.

Perhaps the most intriguing dimension of "Fallout" is the moral dilemma it weaves throughout its story. When it comes to recent franchise pictures that focus on posing supposedly complex ethical or philosophical challenges for its heroes, "Fallout" falls somewhere between the high of "Captain America: Civil War" and the low of "Star Wars: The Last Jedi." It's interesting to see Hunt wrestle with the consequences (or, yes, fallout) of repeatedly refusing to sacrifice the lives of individuals in the name of the greater good. Whether it's beloved characters from previous movies or random civilians he encounters in this one, Hunt is the antithesis of Cavill's Superman from "Man of Steel" in that, instead of being shocking indifferent to death tolls, he cares too much about each human life.

As the villain from "Mission: Impossible II" memorably put it, "he'll no doubt engage in some acrobatic insanity before he'll risk harming a hair on a security guard's head." The good thing about "Fallout" is that it explores this theme in a relatively intelligent way, unlike "The Last Jedi"; on the other hand, there is never any doubt that things will work out in the end for Hunt, which is why it ranks slightly below a truly terrific pop film like "Civil War."

This brings us to the biggest problem with "Fallout," which is how doggone generic it is. Not only does this doom us to knowing from the get-go that Hunt will prevail and all potentially negative outcomes will be averted — a reality that drains every Tom Cruise movie of the suspense needed to prevent it from being boring — but it makes the other more routine aspects of the movie stand out even more. Worst among them are the villains: While critics have accurately pointed out that Thanos' evil Cosmo-Malthusian ideology in "Avengers: Infinity War" makes no sense, at least it was fueled by an idea more interesting than "there cannot be peace without, first, a great suffering." That's the kind of by-the-numbers villain rhetoric that is bland and forgettable except in the hands of truly iconic villains like Heath Ledger's Joker in "The Dark Knight."

"Fallout" also suffers from the fact that too much of its plot depends upon contrivance. "Mission: Impossible" fans may say that's an irreplaceable feature of the series, rather than a bug. But can anyone really suspend disbelief when random character(s) arrive to save the day at just the right moment -- not once, not twice, but over and over again? Or when a grappling hook manages to land exactly where it needs to in order to prevent our hero's death, as if guided by the hand of God? Or when characters don't realize they've been had until the exact second they need to recognize that fact — not one second sooner or later — so that the next set of events can proceed as the three-act screenplay structure demands?

I'd also be remiss if I didn't mention my discomfort in the fact that the "Mission: Impossible" series has, as one of its own primary missions, the goal of continuing the celebrity career of a man who spends his downtime helping to promote an extremely dubious religion. I'm not going to delve into all the ways the Church of Scientology is a disturbing organization, or why it's troubling that Cruise has not been held accountable for his work with Scientology even as other celebrities have fallen after the exposure of their various malevolent acts. Movie critics are supposed to leave such observations at the door when reviewing blockbuster entertainment; as long as the movie itself doesn't advance some nefarious agenda, we are meant to dismiss Cruise's presence in it as benign harmless. But I'm not sure if any franchise that reinforces Cruise's status as a major Hollywood macher can be truly harmless, so I will just note that I feel personally uncomfortable about the guy, and believe I am not alone.

I've referred several times to this year's biggest blockbuster, "Avengers: Infinity War," and it's worth noting one other parallel between the two films. (Alert! Spoilers for both follow.) While "Infinity War" deserves credit for killing off a bunch of major characters in the end, that bold decision is undercut by our certain knowledge that several of those characters have pre-scheduled sequels which make it obvious that they won't stay dead. While "Mission: Impossible -- Fallout" doesn't have the surprises of an "Infinity War," it also doesn't get bogged down in its pretensions, as so many cinematic-universe movies do these days. If you're a fan of this franchise, "Fallout" is a worthy addition. If you just want to see a fun action movie on a summer night, this will more than suffice.