What makes a man a man? A new memoir explores the limits of the gender binary 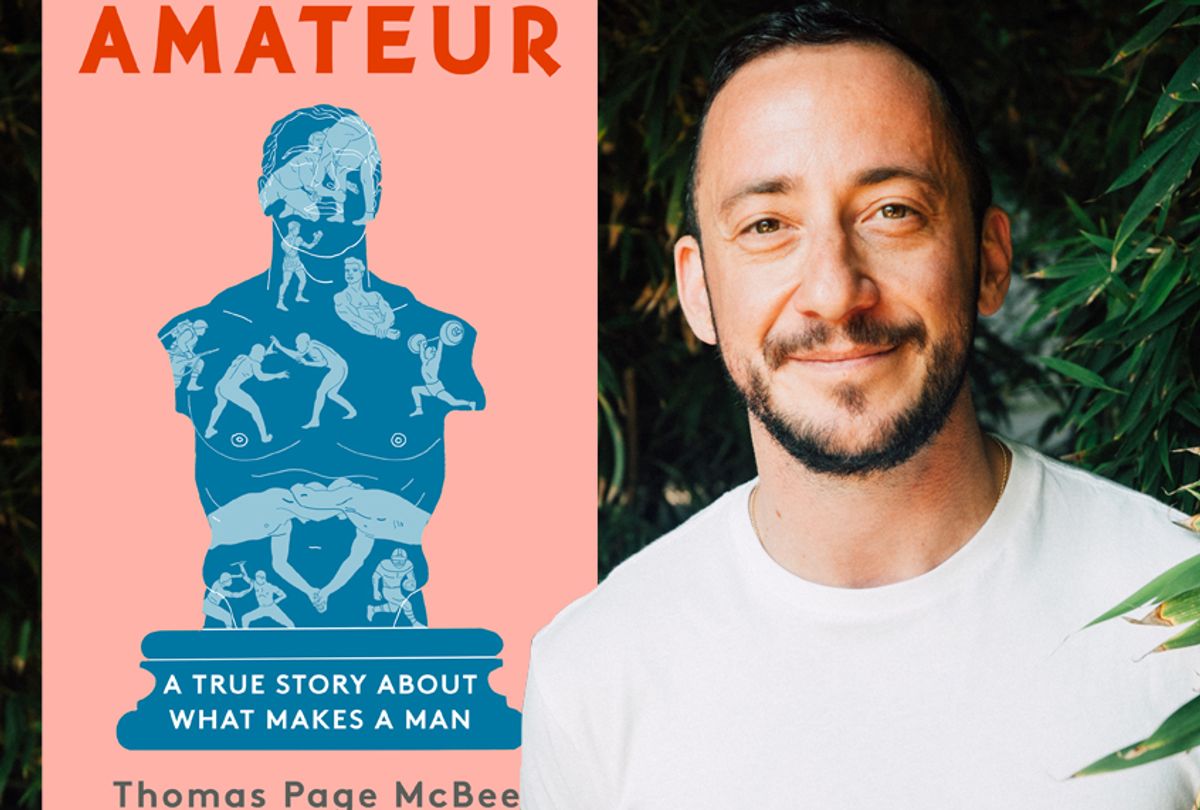 "Amateur: A True Story About What Makes a Man" by Thomas Page McBee (AmosMac/Scribner)
--

"You don’t need to be trans or queer to ask basic questions about your gender," says Thomas Page McBee. "It’s a spiritual pursuit that I think everybody has moral responsibility to do, because this is a basic foundation of our culture."

McBee's candid and conversational new "Amateur: A True Story of What Makes a Man" is a memoir of trans identity that's also a complicated exploration of modern day masculinity and the gender roles that all of us play. McBee, the first transgender man to ever box in Madison Square Garden, uses his experience in and out of the ring to consider the ways in which gender is constructed, and his own learning curve. In one vivid scene, for instance, he describes recognizing a familiar "panic" on the face of a female runner he encounters on a desolate running trail, and becoming aware that "my body was, for much of the world, a weapon until proven otherwise."

Writing in Salon in 2012, he explained, "I don’t think I was born in the wrong body. I am not 'finally myself.' I’ve never spent a day being anyone else. Mine is another story, a real and complex story, and one, by definition, that’s not as easy to tell."

It may not be easy for him to tell, but it's compelling as hell to read. The trans narratives I've been most familiar in my life have tended to follow the more clearcut rebirth story that McBee eschews. And the language I've come of age with, whether cisgender or trans, was still largely exclusive and binary. Male or female. Nothing in between. Yet my teen daughters are growing up with a different vocabulary, one that allows for greater experimentation and fluidity — and a deeper understanding that we can, if we are willing to do the work, define for ourselves our concepts of masculinity, femininity and beyond. When I talked to McBee recently via phone, his enthusiastic encouragement for empathetic — and challenging — conversation was infectious.

"I think we can all agree that the gender binary as it is, is pretty limiting," he says. "Feminists have argued that for a long time. Queer people, all genders, argued that for a long time. I think now more and more men — especially men who have studied how masculinity operates — see the limitations of the male gender identity as it is enforced socially. I have always been interested in narratives about trans people, because in so many ways I felt my transition was delayed by the way in which being trans was represented in media."

And, he adds, "It’s not like I got to the other side and it was like, 'Okay, great. I just totally accept [that] all the things that for my transition I struggled with are now resolved.'"

READ MORE: Married at 15, or How he met my mother

McBee's quest as a writer and advocate has been to expand the ways in which all of us look at identity, and speak to that wider audience. "There are lot of ways we socialize gender; nothing about it is innate. And I figured if that’s true for me, I just can’t believe that it’s not true for more people. I found through my reporting and research and all the conversations I’ve had in writing the book that most people I spoke to had a story [and] I think a real need to talk about gender… so it works better for all of us."

In many painful ways, including bathroom bills and the threatened rights of trans people to serve their country, we seem to be backsliding on human rights and dignity. In my own kids' super liberal, super progressive school last year, a movement to make the bathrooms gender inclusive was essentially shut down by one uncomfortable parent.

"It’s crazy how invested people are in gender as a system," says McBee. "In the UK right now, there’s huge debate about whether trans people exist. There are regular commentators going on the international media and saying trans people aren’t real for various reasons. It’s obviously a metaphor. This isn’t about us. It’s about something in them, and that’s part of the urgency about trying to get people to think about this beyond an identity politics issue. You should care because you’re a human.... If you don’t really realize how you feel about gender, then you might end up being a problem down the road for people like me, and that’s part of my interest in getting people to think about it... It's strange to me [when] we just sit around and agree like, 'Well, that can’t change. It’s always been this way.' In the end, this is not true. We literally can change these narratives that we have."

For McBee, part of that journey toward change has been looking at hard at manhood, including what he describes as his own romantic notions around it. As he recounts in his book, it's meant gaining perspective on how other people's attitudes about his behavior changed after he transitioned, and acknowledging the challenges of moving through the world as a man when so many of our culture's expectations around men are entwined with fear and dominance. These are hard things to talk about. There are extremely legitimate reasons why previous eras of stories about trans people have tended to portray gender affirmation as a finite and happy ending. Yet maleness and femaleness alike always come with baggage.

"Why don’t we talk about ourselves and how we socialize our own shadows, and the worst things that we find in ourselves that we carry around every day?" asks McBee. "And why don’t we actually do the work to try to root out and examine our own worst ideas about men?"

He offers an example. "Obviously, I’m not saying that most men are sexual predators," he says, "but most sexual predators are men. When you don’t look at that, when you don’t want to engage with that at all, I think you’re failing in your moral responsibility to other human beings. We lack an ability to have nuanced conversation about that because people are so reactionary. It feels like as soon as you say this, it's, 'Well, but not all men.' Actually, kind of all men though. Not because men are born sexual predators, but because it is very disturbing the way we condition boys. I think anybody who was a boy, has a boy, interacts with boys, should be really worried about the way we’re conditioning male children and certainly the way that men in general grow up to be. This is a real problem and it’s not something that should just rest on the shoulders of men to deal with, but certainly, they could be leading the charge and having this conversation about toxic masculinity."

One of the ways in which that conversation around gender has evolved — and also stagnated — is in the concept of "realness." It's at the heart of the groundbreaking documentary "Paris Is Burning" and the recent FX series inspired by it, "Pose." Talking to or reading McBee, you begin to think about the ways in which you've constructed your own gender identity, even if that identity has always been unquestioningly cisgender. My version of playing the role of female still is my own creation, formed from the era and environment in which I grew up, and the ideals I've chosen to accept and reject. But for trans people, that construction has often of necessity had to be more conscious.

"Trans people had been documented and existed across time and space and culture…. If you read about trans histories," says McBee, "people that were doing interventions picked the most passable — especially trans women — to help intervene with medically. I think we learned a language that you have to be very confident, that this is who you are, to fit in to culture and not just survive this experience but hopefully thrive on the other side. The goal for trans people for a really long time was just to pass, to go back into the world, and maybe pretend like you never were anything but what you are now."

That, fortunately, is evolving. McBee and I talk about how, just a decade ago, "Ugly Betty" was simultaneously progressive for its representation of queer and Latinx people, yet also embarrassing today in its depiction of a trans female character (played by cis woman Rebecca Romijn). In a relatively short span of time, shows like "Transparent," "Orange Is the New Black," "Billions" and "Keeping Up with the Kardashians," as well as films like "A Fantastic Woman," have shown our evolving understanding of the spectrum of gender experience. And just this week, Vermont Democrat Christine Hallquist became the nation's first transgender nominee for governor.

McBee notes, "I think that there’s something intuitive about the idea that gender is not a binary. Most people have some level of gender exploration and play. I think that what’s unnatural is pushing people into these socialized boxes. It is liberating for everyone to start thinking of gender in a different way. We’re in a cultural moment that’s actually is making sense, because things are coming together, for younger people in particular."

And, he says, "So much about masculinity is about upholding it by not ever speaking to it or never questioning the narratives, and it is kind of a house of cards. When you start asking really basic questions, that sort of interrogation does lead to an expansion of what masculinity could mean. I think that’s really healthy for everyone."

"It's time to grow up as a country"