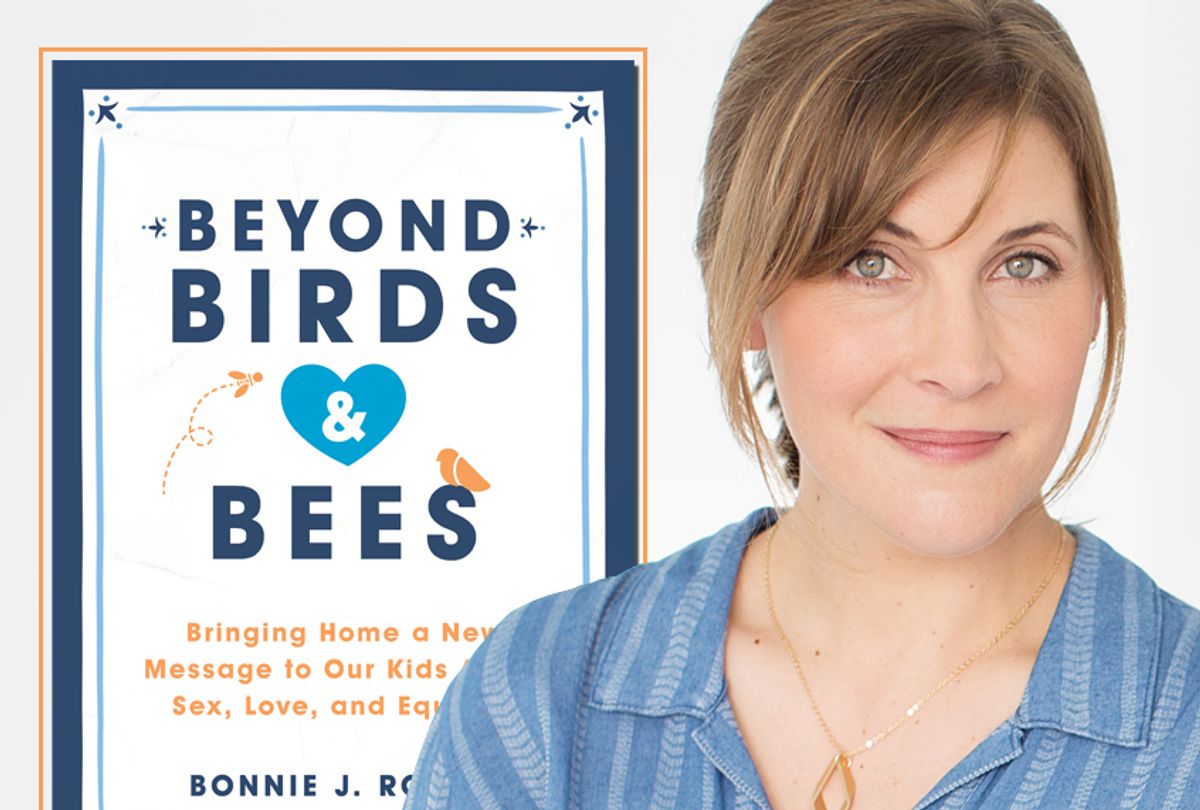 "Beyond Birds and Bees: Bringing Home a New Message to Our Kids About Sex, Love, and Equality" by Bonnie J. Rough (Jessica Peterson/Seal Press)
--

As both Oscar Wilde and Janelle Monae could tell you, everything is sex. It's not an intimate, adult act that exists outside the sphere of every other aspect of our lives. It's a core aspect of identity, tangled up in our attitudes about love, about gender, about respect, about body image, from the day we are born. That's why the deeply American notion that the conversations we have with our kids around sex are just about sex is ridiculous.

Author Bonnie Rough learned that firsthand during a stint of living abroad with her family in Amsterdam, where honest, accurate conversations around body parts and functions are a normal part of everyday child rearing. (Imagine!) Combining the lessons she learned abroad with her talent as a storyteller, her new book, "Beyond Birds & Bees: Bringing Home a New Message to Our Kids About Sex, Love, and Equality" is a warm, sane call to action for parents facing the daunting task of raising kids with a healthy, positive sexuality.

As a mom of two teenagers, I can attest that it's a challenge. We live, after all, in a country that still believes it's hilarious to guard our daughters' virginity like it's the holy grail."I think in many ways we don't feel like we have permission to be free and welcoming and open about sexuality," Rough told me during a recent phone conversation. "For me, that's the beginning of education. If it's OK, then how to normalize and how to be more positive about sexuality starts to come more naturally. Because you don't feel like you're being criminal by accepting human sexuality as a given in the first place.""There's research that says that shaming people and their sexuality can be damaging and affect their sexual function as adults. I hope this book creates a backup for those many parents out there who are already advocating for their kids developing a positive regard for their sexuality, different than that traditionally shame-related one that we've offered our kids in American culture," she added.

The crazy thing about shame is that it doesn't work. Abstinence education doesn't work. What's effective, if you want to curtail STDs and pregnancy rates and abortion, is information and empowerment. So I keep asking myself, Why does this crap still exist? What is the end game of keeping kids in the dark?

"To me, it comes back down to so many of these questions," said Rough. "We know the environment is being degraded and we know we can reverse that tide. But not changing our ways is another way of reinforcing the status quo. It keeps people who are in power in power. Being able to say, 'I'm going to take away a teen pregnancy prevention program and reinvest all those funds into abstinence only, heterosexual marriage education' — everybody knows that stuff doesn't work. It attracts a certain constituency. It's political and it's about power, and kids get hurt because of that game."

Yet Rough remains infectiously hopeful. "Sometimes Americans really blow my mind by how fast they're can decide, 'Oh hey, that's a better idea.' Like boom, marriage equality. It feels like any little tweak can go a long way to help kind of put the wind in our sails."

But she acknowledges that it's still difficult to push back on the powerful forces of the dominant culture.

"Don't you think a lot of parents out there are having those gut-crawling aversion moments, who are like, 'This feels weird,' but aren't thinking, 'What should I do?'" said Rough.

It does feel awkward and defiant to be the parent telling Aunt Jen she can't hold the baby. It also feels exceptionally right.

But the other challenge of teaching children to protect themselves is making room in that conversation to make it clear that sexuality is not supposed to be a defensive experience. It's not meant to be scary or painful. In our justified movement toward more open dialogue on consent, we have often lost the nuance of joy and exploration.

"How do we find the balance?" Rough said. "How do we teach about pleasure and positivity, while still letting our kids know the kind of the current reality of what's going on around them as they grow up?"

That can start as early as during diaper changes, she says, when "the baby reaches down and puts the hand between their legs, the reaction we often will have is to remove their hand or to try to distract them with a toy."

"But we can just change the order in which we introduce the idea of sexuality as healthy and pleasurable and at times potentially risky. We usually start with the risk. We start with the threat. We start with the negativity, or 'Don't go there and that should be secret and that's private and that's dangerous and potentially unsafe.' Then later, when they're older, it's, 'Oh wait, so there's something I'm supposed to like about sexuality,'" said Rough. "If we can leave the baby's hand alone and smile and talk about how sensitivity and pleasure first, this is the normal way to do anything else, right? First we teach our kids to play catch with the ball, then we teach them to not chase it if it rolls in the street."

"My daughter was probably six or seven and we stopped on a road trip at a truck stop to go to the bathroom. And in the women's bathroom, there was a dispenser on the wall that looked like it had something colorful and exciting. She asked 'What is this?' and yeah, there are other people around in the bathroom," said Rough. "I can't remember exactly what I said, but it was something like, 'A condom is something they can go over the penis so that when people have sex the semen can't get into that other person.' I don't know if she knew what I meant by have sex, but just having that foundation, it's easier for us as parents."

Hard as it is for us as moms and dads to watch our babies grow up, our responsibility to them is not to shield them from life, but to prepare them for it. Because sex isn't just about sex. And the sex education we can provide our kids, says Rough, is "to understand more about human bodies, and help them be more comfortable in the world and with around other people."

Lisa Ling on why we all need sexual healing

"A lot of people have shame around sex"