One Republican senator hid in an airport bathroom 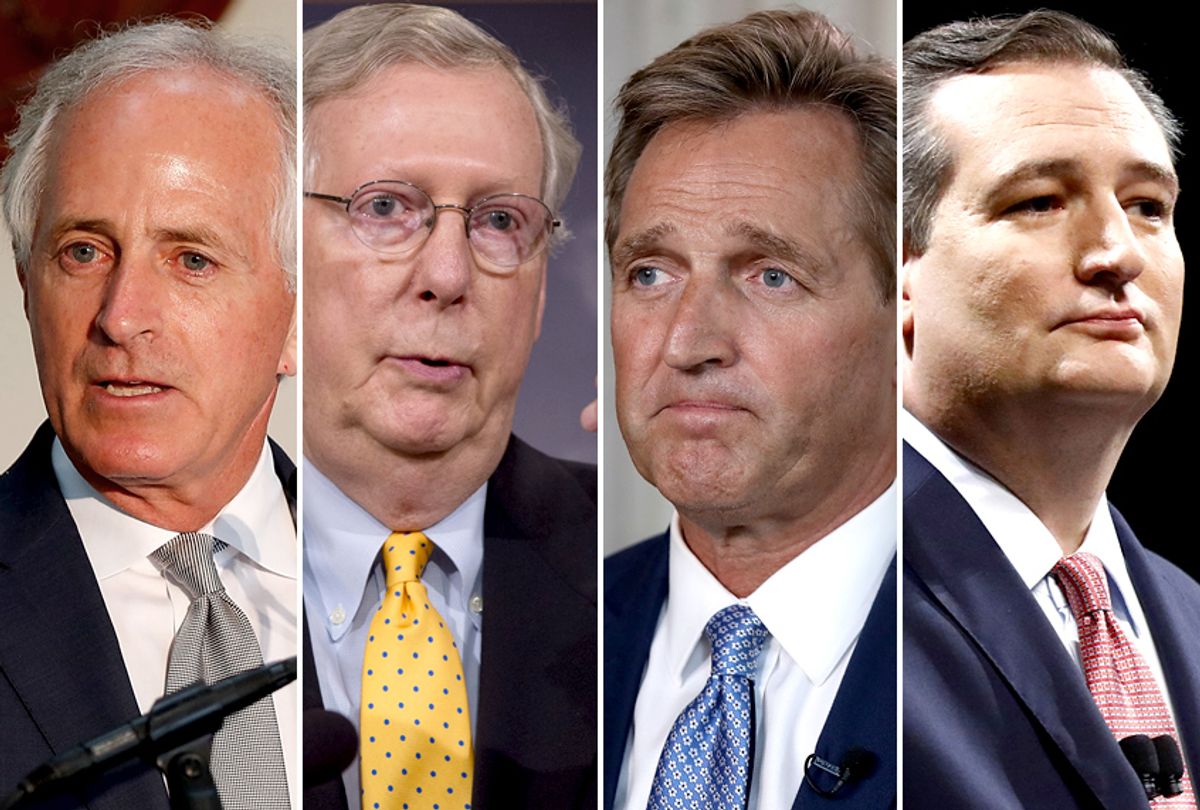 In the days since Supreme Court nominee Brett Kavanaugh appeared before the Senate Judiciary Committee to respond to the sexual misconduct allegations raised against him by Dr. Christine Blasey Ford, several women who claim they are sexual assault survivors have confronted Republican Senators in an effort to convince them to walk back their decision to back Kavanaugh. Some GOP lawmakers ignored the victims or ran away. One hid in a men's bathroom. Some protesters were arrested for trespassing.

In a video shared to Twitter, Senate Majority Leader Mitch McConnell, R-Ky., appeared to be ignoring several women at . an airport who approached him in the hope of sharing their survivor stories with him. At one point, the Republican from Kentucky can be seen greeting a man instead.

"Senator McConnell it is really telling that you shook the hand of a man while a woman is trying to tell you her story," one of the women said to him.

Sen. Bob Corker, R-Tenn., was also approached by sexual assault survivors and was seen in another viral video telling alleged sexual assaualt victims, "I know this is enjoyable to ya'll."

"This is not enjoyable," a woman can be heard responding. "I am a sexual assault victim!"

In another video, Republican Sen. David Perdue of Georgia can be seen refusing to shake hands with Jennifer Addison-Epps, the president and co-executive director of the Center for Popular Democracy, a liberal advocacy group.

"Don't touch me," Perdue can be heard telling her after she tried to tell him her survivor story. Later in the video, Perdue is seen walking into the men's bathroom — likely in an aim to hide from the female activists.

In Maine, three sexual assault survivors objecting to Kavanaugh's nomination were arrested for trespassing at Senator Susan Collins' office on Monday, according to The Maine Beacon. The local newspaper said that the women in attendance detailed their own sexual assaults and urged Collins, who has become a key Republican in the confirmation battle, to oppose Kavanaugh's nomination.

Rep. Andy Harris of Maryland, a Republican, "had his office door pushed through and was assaulted by demonstrators," HuffPost's Jennifer Bendery reported, citing a Capitol Police officer.

On Monday, anti-Kavanaugh protesters converged at Boston's City Hall, where Sen. Jeff Flake, R-Ariz., who has played a pivotal role in the nomination battle, was scheduled to appear as part of the Forbes Under 30 Summit, The Boston Globe reported. The Arizona Republican was also confronted by women last week who claimed they were sexual assault survivors on Capitol Hill. The emotional exchange was captured on television and seemingly shamed Flake to temper his decision to vote "yes" on Kavanaugh by calling for an FBI investigation into allegations of sexual misconduct made against the Supreme Court nominee. Before calling for the supplemental probe into Kavanaugh, the Arizona Senator announced that he would vote to confirm Kavanaugh and defeated a motion supported by all Democrats on the Senate Judiciary Committee to subpoena Mark Judge — the key witness surrounding Ford's allegations. (Ford has alleged that Judge was present when Kavanaugh attacked her.)

During a Sunday interview on "60 Minutes" Flake admitted that he would not have called for the investigation if he were running for reelection.

"No, not a chance,"  Flake said when he asked if he would've made the same decision had he been vying to keep his Senate seat. "There's no value to reaching across the aisle, there's not currency for that anymore, there's no incentive."

And earlier last week, Sen. Ted Cruz, R-Texas, was chased out of a restaurant in Washington, D.C. by anti-Kavanaugh protesters who were shouting "We believe survivors!"

Most recently, President Donald Trump ordered the FBI to launch a one-week investigation into misconduct claims made against Kavanaugh. The scope of the probe, however, remains largely unclear. Trump on Monday said that federal agents would "essentially" have free reign in the investigation, but also said that he had set the scope based on a request by Senate Republicans. What the weeklong probe will unearth is anyone's guess.