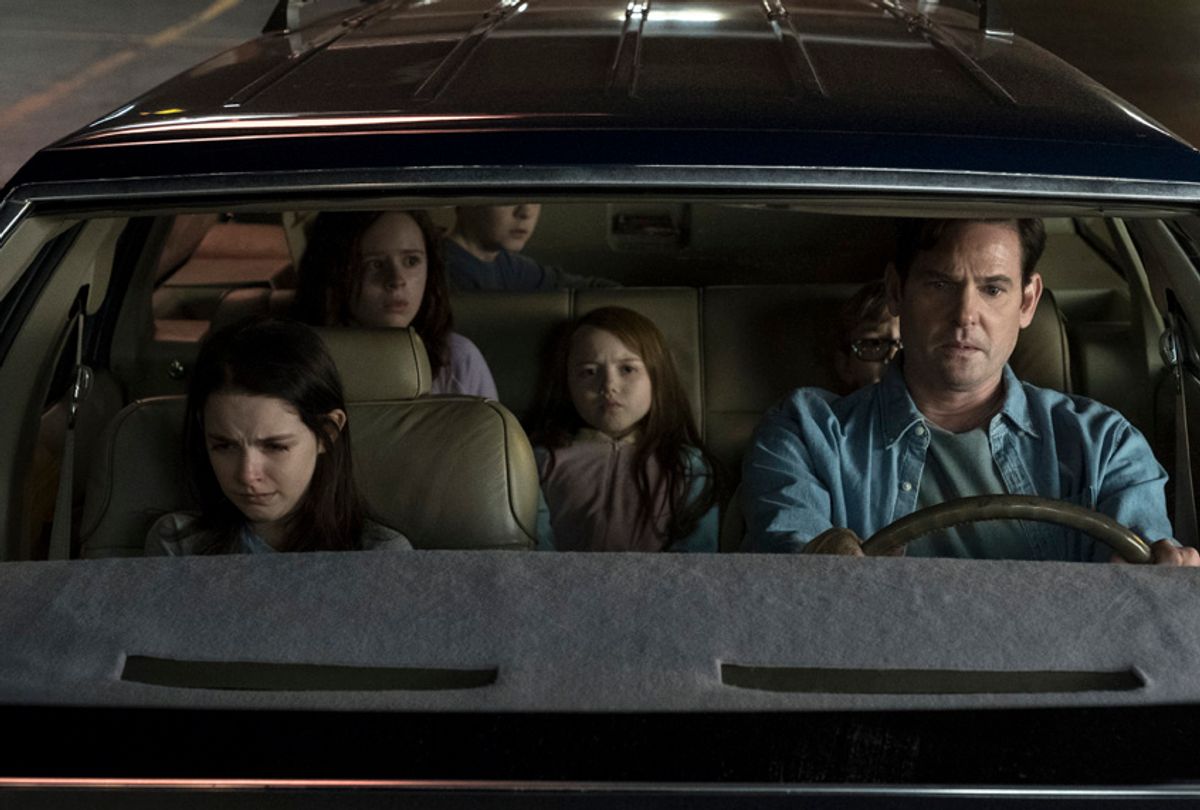 Netflix’s ten-episode version of “The Haunting of Hill House” illustrates that idea in ways that the late Shirley Jackson would have appreciated, I think.  As quoted in Ruth Franklin’s 2016 biography, “A Rather Haunted Life,” Jackson once summed up her work thusly, “I wrote of neuroses and fear and I think all my books laid end to end would be one long documentation of anxiety.”

Handily, that might also serve as an accurate description of these days we’re living in.

Series creator Mike Flanagan, the mind behind cinematic terrors such as “Oculus” and “Hush,” might not have expressly intended to channel the tensions of any given time, let alone this one, when he conceived this multi-part update of Jackson’s 1959 literary classic.

Then again, the most masterful works of horror have always been thinly veiled metaphors for terrors running rampant in the real world, many of them the result of political and social shifts. And if one were to give a name to the boogeymen running amok right now, it would be fear and its aggravating accompaniment, denial — two great tastes typically combined to create the main course of many a horror show.

Denial of fear is at once a human tendency and most American. Mention the word and witness whether somewhere in your brain, faint echoes of that famous line uttered by Franklin Delano Roosevelt in 1933 about having nothing to fear but fear itself rebounds to the surface of consciousness. We are supposed to face our fears, head on.

But what if the reasons these fears are so overpowering is because we’ve conditioned ourselves to disavow them? The perfectly reasonable explanation for those bumps in the night is never the unreasonable one, right? Or maybe something did happen, but we’re not remembering it correctly. Many of our fears are rogue cells sloughed off from deeply buried scars.

Anyway, these are the circumstances that allow Hill House, the most haunted mansion in America, to thrive.

Jackson’s novel is a genre standout owing to its psychological interpretation of horror, and this approach that informed 1963’s “The Haunting,” an atmospheric, unsettling cinematic adaptation of the book. (There’s also a 1999 version whose existence is best left forgotten.)

Flanagan transforms key characteristics of the story, changing it from a tale about four strangers coming together at the legendarily haunted Hill House to a family story, keeping the viewer off-balance by employing time shifts and subtle effects playing in the background.

“The Haunting of Hill House” bounds, seamlessly at times, between an ill-fated summer in the distant past of the Crain family’s history, and the present, when they are all adults who barely get along, if they speak to each other at all.

Their problems start when Olivia Crain (Carla Gugino) and her husband Hugh (Henry Thomas, as the younger version) move their family into the elegant, imposing old mansion with the intent of restoring it and re-selling to secure their fortune. Oldest son Steven (Paxton Singleton) and eldest daughter Shirley (Lulu Wilson) are mostly annoyed with being cooped up with their younger siblings Theo (Mckenna Grace) and twins Nell (Violet McGraw) and Luke (Julian Hilliard).

But soon, the youngest kids begin seeing things. Nell has visions that lead to night terrors and Luke also reports odd happenings. Olivia starts behaving erratically, as does Theo. And then, the horror hits home.

Decades later, Hugh (whose older version is portrayed by Timothy Hutton) is a disgraced mess who mutters to himself. Steven (Michiel Huisman) finds success as a horror author, launching his career off the tale of his family’s tragedy. Shirley (Elizabeth Reaser) runs a funeral home – convenient, since she doesn’t seem to enjoy the living very much. Theo, a therapist (Kate Siegel), doesn’t like being touched. Luke (Oliver Jackson-Cohen) is a junkie.

Arguably the child most damaged by that summer’s events is Nell (Victoria Pedretti), whose sleep paralysis cripples her well into adulthood. Worse, with the exception of Luke, her other siblings dismiss her insistent claims that the house is still haunting her as manufactured drama. Their regret over their refusal to believe her constitutes the first demon that comes back to haunt them.

In the place of the novel’s central experiment, designed by a character to prove the existence of paranormal activity, are a pair of traumas designed to rip the family apart. And they are horrible, even though we don’t see how they occur until well into the first season.

That “The Haunting of Hill House” does not trade in gore or brutality is a distinguishing characteristic that actually makes the series’ frights more impactful and far more sinister.

By telling one ghost story through multiple perspectives, with at least one episode devoted to each family member’s point of view, the series descends us so slowly into the pit that at first, you may be think that you’re watching a tragedy as opposed to a fright tale. Truth be told, it’s both of these things. Initially, it comes off as a slow burn, a term I’m loathe to use because it’s often employed to justify writers taking too much time to actually get to the point of a drama.

“The Haunting of Hill House” earns its luxury from the start, with the cinematography, editing, writing and performances that immediately establish it as a watchable, intriguing tale. When the terrors start kicking in is when it rises to the level of great.

The drama benefits from a terrific ensemble, but since every potent dread must have stakes, Gugino and Pedretti do the tough work of providing them.

Structuring the series to bounce through time keeps the viewer off-balance in the series opener, and as such, we see Gugino show us the many faces of Olivia Crain – doting mother in one moment, short-tempered and demanding in the next. Pedretti, too, evolves her character far beyond her introduction to justify Nell’s place at the heart of the story. The episode devoted to Nell, actually, is the season’s most enthralling, heartbreaking and horrifying. You may need a break after its end credits.

The Netflix drama’s reverence for the novel’s soul radiates through its interpretation of fear, belief and the true definition of a haunting. But the highest compliment one can pay to any tale of terror is that it feels real enough to stay with you, to keep you up at night and believe in it.

Jackson’s exploration of haunting as an internalized concept makes her novel timeless. But her book and Flanagan’s series don’t shy away from acknowledging that many fears are justifiable. There are reasons they exist that are as real as brick and mortar, that cannot be vanquished by disbelieving.

In possessing that notion completely via writing, visuals and its cast performances, this new incarnation of “The Haunting of Hill House” is more than merely superb. It could prove to be the defining horror series of this moment.