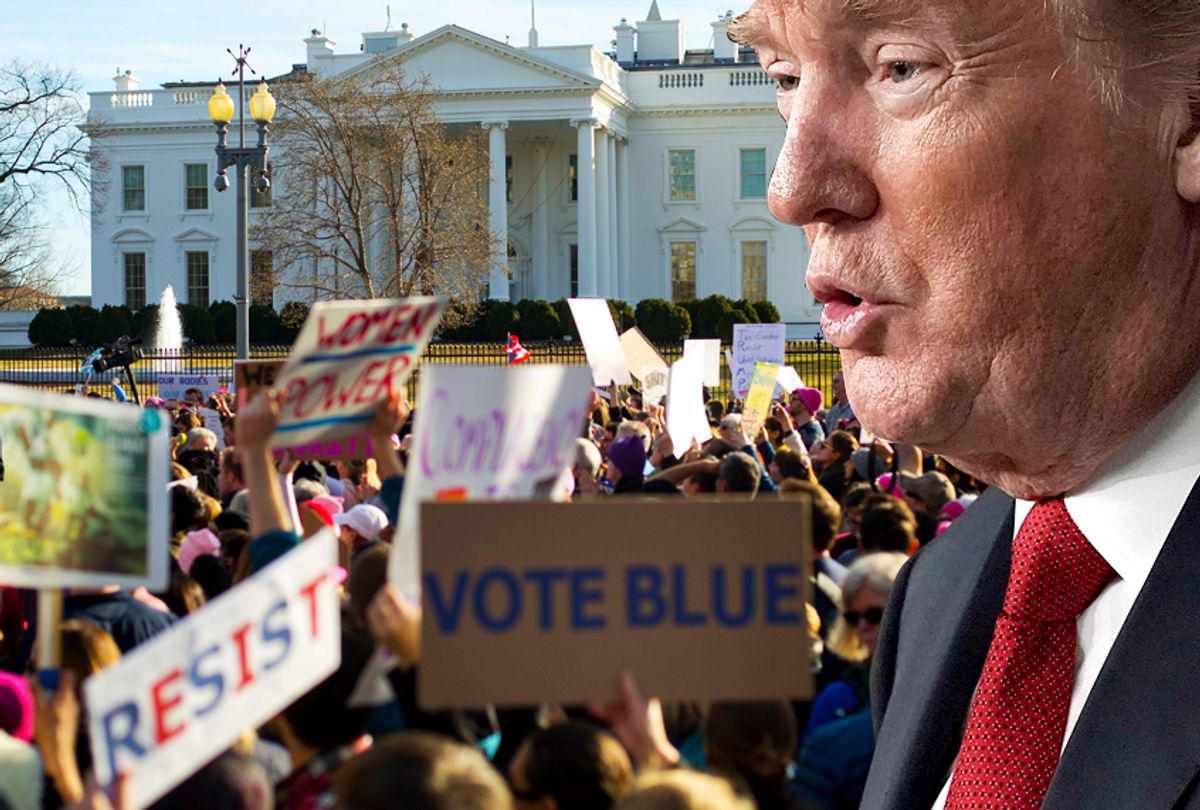 President Donald Trump and Republican lawmakers have repeatedly accused — without evidence — that some people who protest the GOP agenda are paid protesters. Most recently, Trump dismissed the countless number of sexual assault survivors and their advocates who converged on Capitol Hill ahead of Brett Kavanaugh's confirmation to the Supreme Court by baselessly accusing liberal billionaire George Soros of paying the demonstrators.

In an unprecedented turn of events, the Trump administration has proposed a policy change that would require citizens to pay to be able to protest — a policy change that civil liberties groups have slammed as an infringement to freedoms guaranteed by the First Amendment of The Constitution.

According to a proposal introduced by Interior Secretary Ryan Zinke, the Trump administration is looking to restrict access to a 80 percent of the sidewalks surrounding the White House and on the National Mall. The proposed rule changes also suggest charging "event management" costs for protests and putting new restrictions on spontaneous demonstrations.

Zinke submitted the policy change on behalf of the National Park Service, a bureau at the executive agency that administers the areas. The bureau is currently able to recover costs associated with special events, but not spontaneous demonstrations, similar to the ones that regularly emerge on the White House sidewalk; Lafayette Park to the north of the White House; and the Ellipse or the President's Park South, to the south of the White House grounds, according to the proposal. These fees could include "direct costs associated with event management, set up and take down of structures; material and supply costs such as barricades and fencing needed for permitted activists; costs for the restoration, rehabilitation, and clean-up of a permitted area such as sanitation and trash removal; permit application costs; and costs associated with resource damage such as harm to turf, benches, poles, and walkaways."

The policy change also requires that applicants submit permit applications at least 48 hours in advance of any demonstration or special event.

"Adding this statement would provide more flexibility for spontaneous demonstrations, while allowing the Regional Director to ensure that the NPS and the U.S. Park Police have the law enforcement capacity to safely manage events that are requested with less than 48-hours notice," the proposal says.

Civil liberties groups have strongly condemned the proposals, saying they're a violation of the rights guaranteed under the First Amendment of The Constitution. The ACLU noted, "fee requirements could make mass protests like Martin Luther King Jr’s historic 1963 March on Washington and its 'I have a dream' speech too expensive to happen."

During the Vietnam war, the federal government attempted to impose similar restrictions on citizens freely assembling in protest near the White House and were sued by the ACLU. As the Court of Appeals for the District of Columbia found in their ruling, the "use of parks for public assembly and airing of opinions is historic in our democratic society, and one of its cardinal values."

The National Park Service has attempted to defend the policy change by emphasizing that large demonstrations, like the Women's March and the March for Our Lives, drain their resources and place a heavy financial burden on the federal government.

The public has until 15 October to comment on the plans.