Michael Kelly credits Robin Wright with saving "House of Cards": "You want to be on the Robin train"

Salon talks to the man who plays Doug Stamper about politics on TV and off, and why he won't rule out a run himself 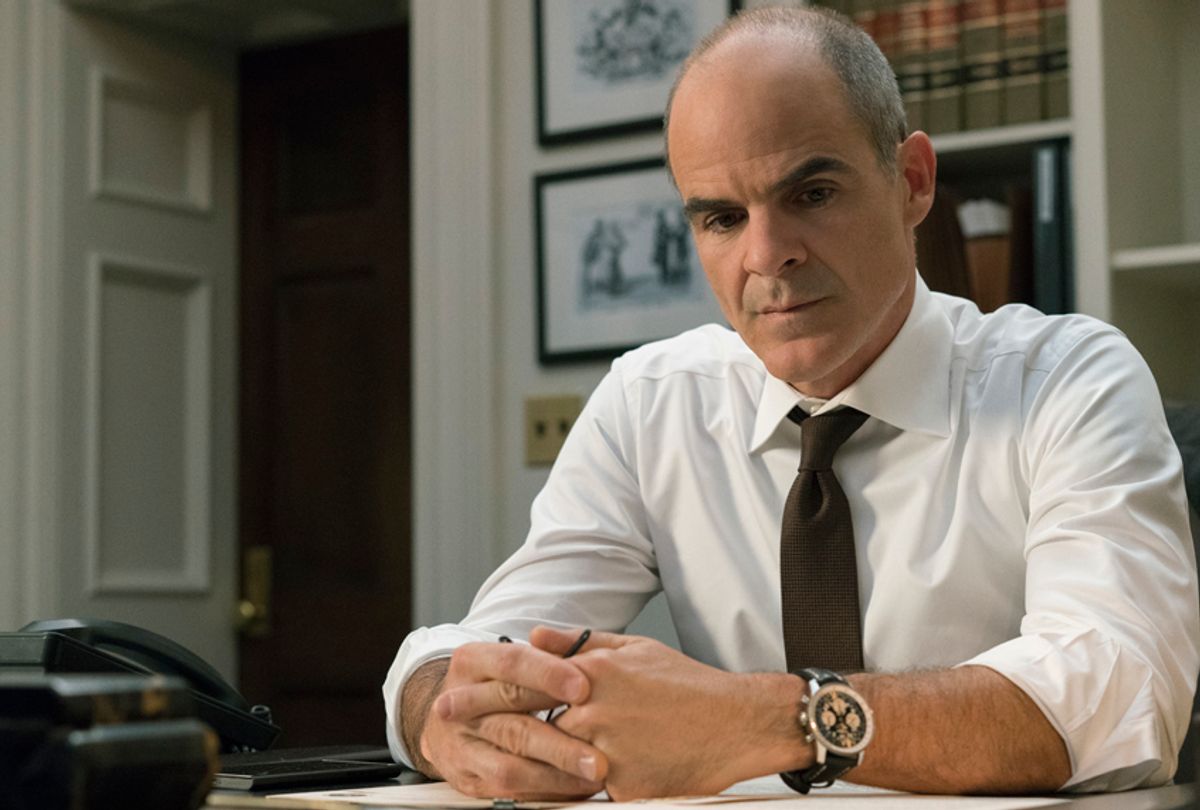 "I think the best way to describe him is lost," said Michael Kelly of his "House of Cards" character. "You see him quickly trying to figure out what the next move is and where he fits into this new world."

Kelly's character — the occasionally violent, ferociously loyal and death defying Douglas Stamper — was already grappling with a world of change at the end of last season, when Claire Underwood (Robin Wright) had assumed the presidency. Now, as the show launches its sixth and final season, things are about to shake up even more.

Following the firing of Kevin Spacey last year year after allegations of sexual misconduct, "House of Cards" completely overhauled its original blueprint for the season and killed off Frank Underwood. As Kelly told me on a recent episode of "Salon Talks," that means that now, that means Doug Stamper is now adrift.

"For the first time, you see a character who's always had something with a gravitational pull that drove him with his job and the man he served. Now they're both gone, and he's completely lost," Kelly said. "When you left us at the end of [season] five, he had just taken the fall for the murder of Zoe Barnes. What he was promised going into that, and knowing that those promises might not be fulfilled, just leaves him with a lot of people after him."

Behind the scenes, the cast and crew of the Netflix series went through their own shifting gravitational pull after Spacey's downfall, and the show almost didn't return at all. "It didn't look like it was going to," said Kelly. "We had the hiatus when the news broke, and one of the first calls I made was to Robin. We chatted for a minute, and I said, 'We can't not do this.' And she said, 'We have to do this, and I'm already on it.' She sounded more like Doug Stamper at that moment than I did."

Kelly is effusive in his admiration for his colleague. "With Robin driving the train," the three-time Emmy nominee said, "everyone agreed it was the right thing to do to continue. It very quickly became [a question of] how, and that was on the writers. They had already had all thirteen episodes storyboarded. I think eight of them were written. We were in the process of filming the first two. I was done with my first two episodes."

Sinking in to his new plotline was an adjustment even for Kelly, who'd become accustomed to bombshells on the show. "I've always tried my best to adapt to the scenarios that I'm given as the character," he said. "Every year those writers give me something that terrifies me and excites me. You're like, 'I can't wait to do this, and, how do I wrap my head around that?' This season it was just a little bit more of that, with a little bit less notice. How do you hit that curveball coming in after you've been hitting a fastball for a while?"

Kelly continues to give the bulk of the credit for the final season's success to Wright. "Robin was the leader and she stepped up and brought us all together, made it happen. Then when we got on set she was again the driving force. Everyone rallied behind her."

"She's very easy to get behind," he said, "and not in a Claire Underwood way, just in a Robin way. You want to be on the Robin train."

And behind the camera, he calls Wright an "actor's director," saying she's "incredible at giving you one little nugget, one little sentence sometimes that says so much more than that one little sentence. It opens up the scene in so many different ways. She's just insightful in that way of how to work with an actor."

Though Doug Stamper faces explosive surprises in his final season, Kelly himself has a natural ease around Beltway culture. He studied political science in college, and says that the show definitely made him a little more involved in politics, because it gave him a platform to advocate for causes he believes in.

"So many people say to me on Twitter, 'You're an actor. Why don't you stick to acting?' I back it up," he said. "I'm not just saying that I disagree with policy just to say I disagree with the president. I go and I lobby on the Hill for seniors. I meet with Republicans and Democrats and I sit down and I talk about bipartisan issues that we can come together on."

"I think we're at a time right now where we are so divided as a country," Kelly adds. "If we all just listened a little better, I think we'd be a lot further. But we have someone who is literally driving us apart right now and it's sad to me. I do what I can to try."

Just a few days shy of the midterms, Kelly bemoans the low turnout in the last election and says he wants more people involved in the system. "In my opinion, it's your right and it's your duty to vote," he said. He even emailed "my whole family" in Georgia to encourage them to participate in the upcoming election.

"We need to come together as a country right now," Kelly added. "We don't have a leader who's telling us to come together. We have a leader that's dividing us right now. I don't care what your political views are. Bring us together as a country. That's the most important thing anyone can do right now because we've never been so divided in our adult lifetime."

As his run on "House of Cards" comes to a close and he's already finished shooting an arc for the second season of "Jack Ryan," Kelly has an eye on the next phase of his life. He's not done acting yet, but he hasn't ruled out a more public role.

"I want to stay involved politically and maybe one day run for some office," he says, quickly adding, "I don't want to be president. There was an unwritten rule prior to this election of having to either have been in the military or served some sort of public office. It was an unwritten rule for a reason, and we are seeing evidence of that now. So I don't want to jump in the presidency, but I think that if I could make the world a better place I should try to make the world a better place."