"I don't know what's in your heart, but we all know what came out of your mouth," Democrat Mike Epsy said in reply 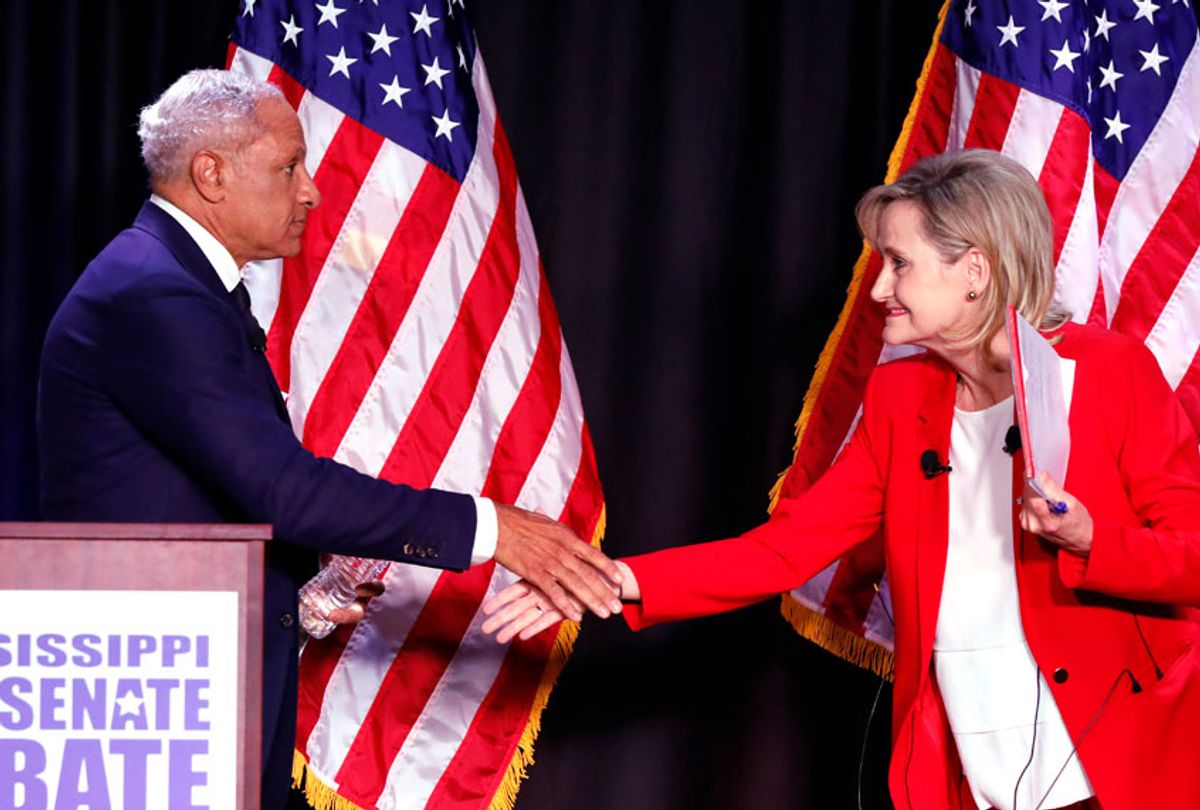 GOP Sen. Cindy Hyde-Smith of Mississippi used a debate Tuesday to apologize for "joking" that she would sit "in the front row" at a "public hanging" — an apparent attempt to recover from a disastrous stretch of her Senate campaign, which seemed like a sure win for her until she imperiled her prospects against the Democrat in the race, former U.S. Secretary of Agriculture Mike Espy, in a state marred by its history of lynchings.

The Republican incumbent maintained that her comments, which were captured on video and immediately went viral on social media, reflected "no ill will." "For anyone that was offended by my comments, I certainly apologize," Hyde-Smith added.

Tuesday was the first time that Hyde-Smith publicly addressed her comments. In news conferences after her remarks surfaced, she pointed to a written statement that her campaign had issued – and reiterated a variation of "I put out a statement."

It was also Hyde-Smith and Espy's only joint appearance before the Nov. 27 runoff election in the race to fill longtime Republican Sen. Thad Cochran's seat. Because neither Hyde-Smith or Espy garnered more than 50 percent of the vote on Election Day — both received slightly more than 40 percent — the race advanced to a runoff on Nov. 27, which polling predicated.

Espy added that Hyde-Smith's remarks had "given our state another black eye" and insisted that she had "rejuvenated old stereotypes that we don't need anymore." (Many critics and political observers interpreted Hyde-Smith's comment as having a link to Mississippi's long history with racism that includes 581 lynchings between 1882 and 1968 — the most of any U.S. state during that time period, according to the NAACP.)

But it was not until his closing statement that Espy, who had been out of public office for nearly 25 years until he entered the race, assailed Hyde-Smith over her comments and also alluded to another video in which she said that voting should be "a little more difficult" for "liberal folks" —  a remark she maintains was made in jest.

"We've got a senator here talking about public hangings and voter suppression," he said, adding, "Ladies and gentleman, I'm not going back to yesteryear. We are going to move forward."

Meanwhile, Hyde-Smith used much of the hour-long debate to attack Espy on immigration, link him to Sen. Chuck Schumer (D-N.Y.) and highlight the $750,000 he was paid in 2010 while representing the one-time dictator of the Ivory Coast.

She also argued that "conservative values are on the ballot" and embraced President Donald Trump as often as she could. In particular, Hyde-Smith used her opening and closing statements to promote the president's scheduled rallies on the eve of the runoff election, which she emphasized are planned on her behalf, and cited Trump's website URL for viewers at home so that they could register to attend.

In response, Espy deflected the Republican attacks that he was "too liberal" for the state and pledged he would put "Mississippi First," while suggesting that Hyde-Smith would follow Trump's marching orders.

Espy also took moderate positions throughout the debate: He promised to defend the Second Amendment and touted his ownership of guns, but said he supports restricting access to firearms. He also called the president's tariffs a "wrongheaded policy" that hurt Mississippi's farmers and criticized the proposed border wall as expensive and "impractical."

She then attempted to point out that she had co-sponsored a bill introduced by Sen. Thom Tillis (R-N.C.) called the Ensuring Coverage for Patients with Pre-Existing Conditions Act, which she claims would protect patients with pre-existing conditions — only she called Tillis "Tom Thompson" and said he represented South Carolina.

As Hyde-Smith attempted to push back against the political fallout from her comments at Tuesday's debate, Espy invoked a request from Walmart, the country's largest retailer, who on Tuesday asked Hyde-Smith to return its $2,000 campaign donation.

"Sen. Hyde-Smith's recent comments clearly do not reflect the values of our company and associates," a spokesman for Walmart said in a statement. Walmart was the third company to withdraw its contributions to her campaign.

In a statement on Tuesday, Espy's campaign said Walmart's request for a refund demonstrates why Hyde-Smith "can't be trusted to work with the businesses Mississippi needs to grow good paying jobs."

As Hyde-Smith's polling advantage and her financial prowess dwindled, Espy's fundraising has picked up. And while the results of next week's runoff will not shift the balance of power in the Senate, as Republicans will hold a Senate majority even if Hyde-Smith loses, if Espy were to come out on top, it would limit the GOP's Senate advantage to four seats next year.

Still, the chances of a Democratic victory in Mississippi — a state that GOP President Donald Trump won by nearly 18 percentage points in the 2016 election and whose senior senator, Republican Sen. Roger Wicker, was reelected by nearly 20 points earlier this month — remain to be seen. Moreover, Mississippi has not elected a Democrat to the Senate since 1982.