Lemon aired 2013 footage of Trump, in which he claimed then-President Obama should be fired over a gov't shutdown 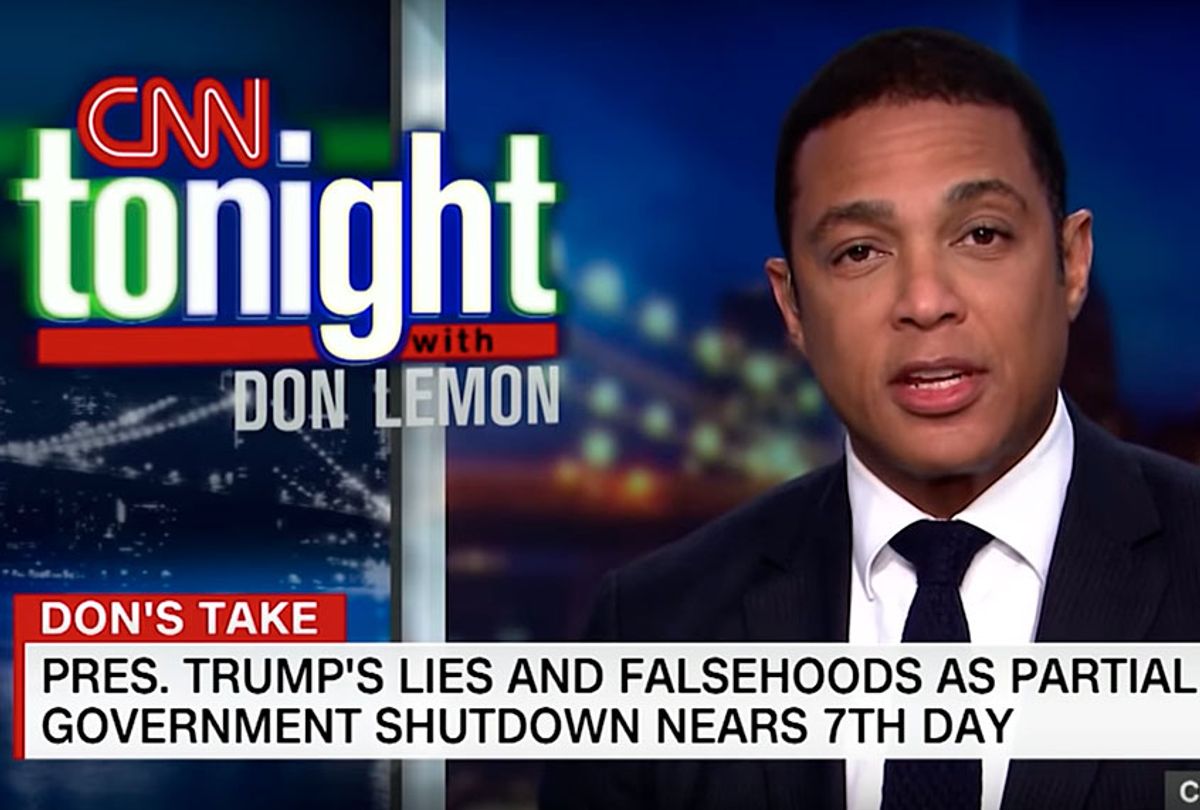 "If you say, 'Who gets fired?' it always has to be the top," Trump said during an episode of "Fox & Friends," his favorite morning show, that aired in September 2013. "I mean, problems start from the top and they have to get solved from the top. The president's the leader. He's to get everyone in a room and he's got to lead."

Lemon aired the clip on Thursday night and deadpanned, "Starts from the top. If anyone should get fired, the president. Hm."

"Donald Trump suggesting that President Barack Obama should have been fired for a government shutdown. Priceless," Lemon concluded.

Lemon's comments came as the government shutdown entered its sixth day with no end in sight. The government shut down on Saturday after Congress and the White House failed to break a bitter budget standoff, as Democrats have the Senate votes to block any spending bill that includes funding Trump's wall — and Trump said he'll veto any bill that doesn't.

The Senate, in a bipartisan voice vote, passed a stop-gap spending bill on Thursday that would fund the government until Feb. 8, 2019 and prevent a partial government shutdown. The legislation did not include funding for border security. Meanwhile, the Republican-controlled House rejected that measure and passed a spending bill on Thursday that also kept the government open until Feb. 8, 2019 and includes more than $5 billion for border security. That bill has been rejected by Democrats and did not have the support to pass the Senate.

As a result, Democrats and Republicans on Capitol Hill are now embroiled in a public blame game over who is responsible for the government shutdown. Trump has attempted to pin blame on Democrats for the shutdown, pointing to the passage by the House of a spending bill that includes funding for the wall, even though he previously said he would be "proud" to shut down the government if Congress did not agree to provide at least $5 billion toward one of his biggest campaign promises. He also suggested that Senate rules should be amended, if necessary, so that Republicans in the upper chamber could pass a spending bill without support from the Democrats.

Trump also alleged on Thursday that the hundreds of thousands of federal workers either furloughed or working without pay "are Democrats" — just two days after he claimed "many" of those government employees told him they're fine with not getting paid so long as Congress does not provide the funds he claims are needed to build his long-promised wall along the U.S.-Mexico border.

In a statement on Thursday, White House press secretary Sarah Huckabee Sanders said the president and his team "stayed in Washington over Christmas hoping to negotiate a deal that would stop the dangerous crisis on the border, protect American communities, and re-open the government. The Democrats decided to go home."

Lemon, pointing to the the irony of Trump calling for Obama to be fired during a 2013 shutdown when he's been busy blaming the Democrats during his own shutdown has become a trend for the CNN host this month. Last week, Lemon broadcast footage of Trump from 1999, in which Trump is seen bragging about his extensive knowledge of campaign finance.

"I think nobody knows more about campaign finance than I do because I'm the biggest contributor," Trump said to then-late-night television host Larry King in the clip from 1999.

Lemon last week responded that although Trump has claimed he "knows plenty about campaign finance," there's "always a tape or a tweet for everything" — an apparent gesture to the mounting legal issues Trump's former personal attorney and "fixer," Michael Cohen, is embroiled in.

Cohen has been sentenced to three years in prison after pleading guilty to numerous criminal charges, including for his role in buying the sentence of women who alleged affairs with the future president during the 2016 presidential election, which Cohen alleged was made at Trump's request.