Warren: Trump is a "grifter and a scammer" who gives "giant tax giveaways to the billionaires" 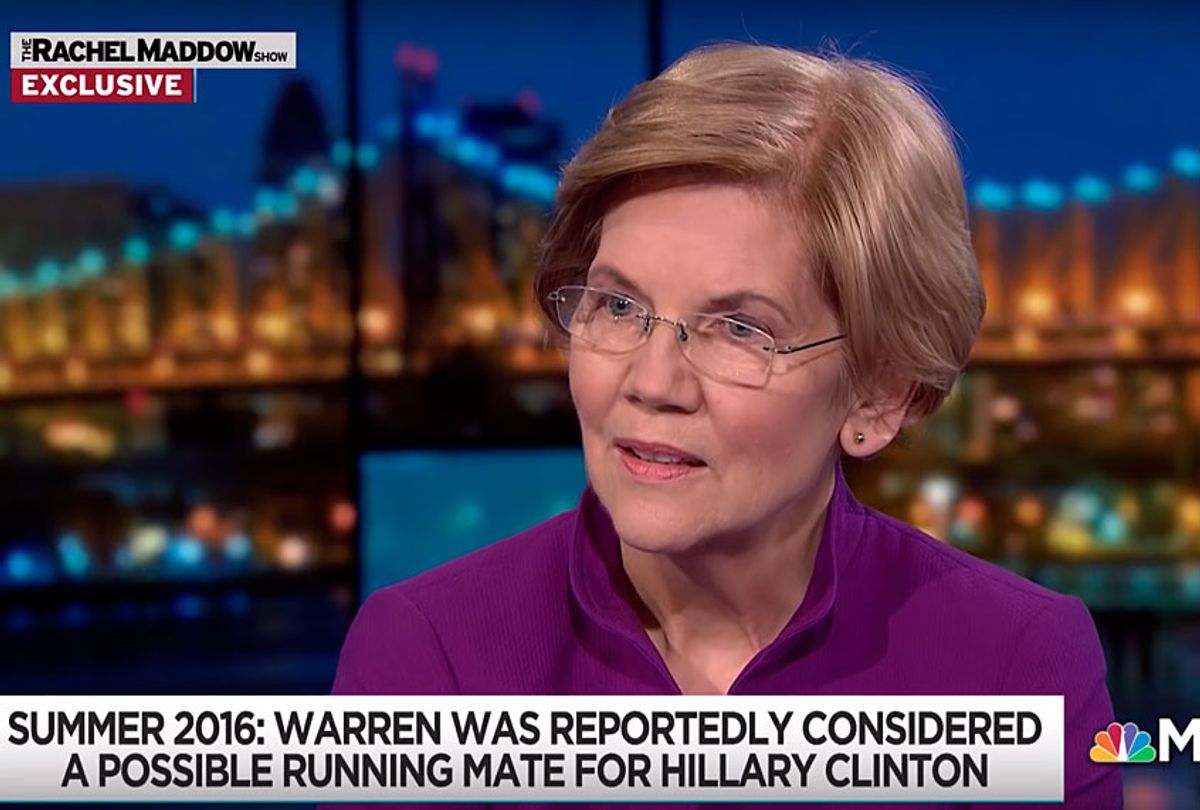 During a sit-down interview with MSNBC's Rachel Maddow, the Massachusetts Democrat, who said she was forming a presidential exploratory committee on the last day of 2018, accused Trump of pushing policy that benefit the rich and the powerful over middle-class Americans. Warren told Maddow that Trump is "what happens when corruption invades a system."

"Donald Trump is an accelerant," Warren said. "He takes a problem that has just been growing, and growing and growing, and he just sets it off – and makes it worse than it ever was."

Warren also slammed Trump as a "grifter and a scammer" who gives "giant tax giveaways to the billionaires, to the big corporations and a harder and harder squeeze for working families."

She then criticized the president for his 2017 tax cut, arguing that it gives more than one and a half trillion dollars to billionaires and corporations. Warren blasted the cuts as a "payoff" to donors, claiming the president has made clear his attempts to advocate for legislation benefiting the wealthy while working families are suffering.

Warren, who announced Monday that she is forming an exploratory committee allowing her to raise money and fill staff positions before a formal kickoff of a presidential bid, pledged to advocate for economic fairness for all Americans and to help restore the middle-class.

In a four-and-a-half minute announcement video, the Massachusetts senator built upon those themes and admitted that, even in a rigged system, racial discrimination presents an additional and unique challenge.

"Working families today face a lot tougher path than I did. And families of color face a path that is steeper and rockier — a path made even harder by the impact of generations of discrimination," Warren said in her announcement video.

Warren's swift rise — from a struggling childhood, to a Harvard professor to the Senate — is "built off her brand of taking a pickaxe to Wall Street," Salon's Sophia Tesfaye wrote. Warren recently announced that she hired a black woman as her chief of staff, one of the few on Capitol Hill.

"I've spent my career getting to the bottom of why America’s promise works for some families, but others, who work just as hard, slip through the cracks into disaster," Warren said in her announcement video. "And what I've found is terrifying: These aren't cracks families are falling into – they’re traps. America's middle-class is under attack."

Warren's announcement made her the first major candidate in what is expected to be a very crowded contest for the Democratic Party's presidential nomination that features a heap of ambitious progressive leaders — and less of the so-called "establishment" kind like 2016 nominee Hillary Clinton. If Warren formally throws her hat into ring, she would likely face competition for the Democratic nomination from fellow Sens. Cory Booker (D-N.J.), Kamala Harris (D-Calif.) and Bernie Sanders (I-VT). Former Vice President Joe Biden and former Rep. Beto O'Rourke, who fell short in his campaign against Republican Ted Cruz in the Texas Senate race during the 2018 midterm election cycle, have also hinted that they are weighing a White House bids. In addition, John Kerry recently alluded to mounting  presidential bid — and these names far from the complete list.