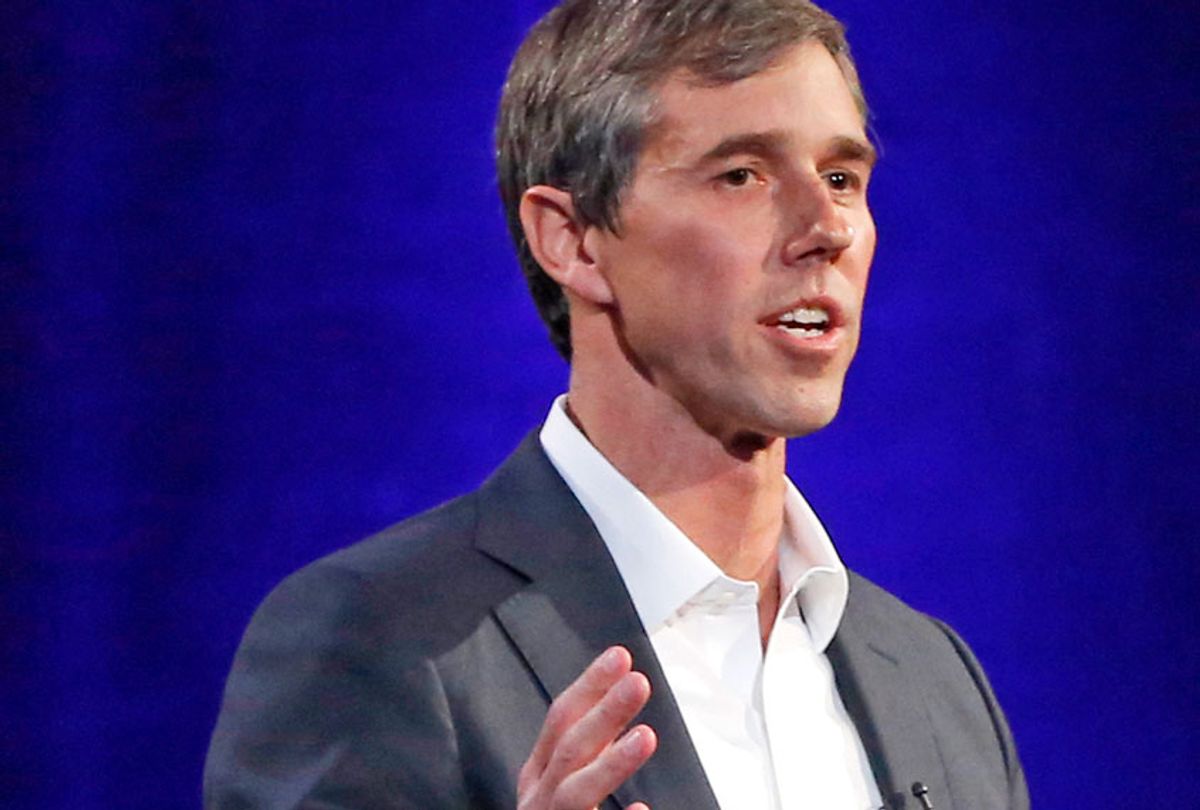 Beto O'Rourke raised $6.1 million during his first 24 hours as a presidential candidate, his campaign said Monday, in what amounts to be the largest initial fundraising haul of any 2020 Democratic contender who has disclosed their figures to date.

The former Texas congressman took in $6,136,763 in online contributions from all 50 states within the day after announcing his White House bid, according to his campaign. O'Rourke did not, however, reveal how many individual donors contributed to his campaign or their average donation. Still, his initial fundraising haul surpasses the $5.9 million one-day total Sen. Bernie Sanders of Vermont raised last month after announcing his campaign, with donations averaging just $27 — a figure mirroring the average donation size he repeatedly touted in his first bid for the White House in 2016. The other closest 2020 Democratic contender to disclose his or her complete first-day fundraising total was Sen. Kamala Harris of California, who raked in $1.5 million from 38,000 donors in 24 hours — the average online contribution was $37 — a number that, at the time, raised eyebrows.

"In just 24 hours, Americans across this country came together to prove that it is possible to run a true grassroots campaign for president — a campaign by all of us, for all of us, that answers not to the PACs, corporations and special interests but to the people," O’Rourke, who has ruled out PAC donations of any kind, said in a statement announcing the total.

O'Rourke's 24-hour haul came after he launched his campaign Thursday with a video and three-day, 13-county swing in Iowa — his first visit to the first-in-the-nation caucus state as a presidential candidate. There is no way to independently verify the candidates' initial contributions. A more thorough picture of how much 2020 presidential hopefuls raised — and how much they spent — to rake in that money will be made clear April 15, when first-quarter filings will be made public.

The Texas Democrat's first-day fundraising sum reveals he has the potential to recreate the smashing fundraising records he displayed in his failed bid to unseat Sen. Ted Cruz, R-Texas, during the 2018 midterm election cycle, when he raised an historic $80 million mostly from small-dollar donors. O'Rourke's fundraising prowess and his closer-than-expected performance to Cruz in November propelled the charismatic but largely unknown three-term congressman into the national stage, where he has drawn comparisons to former President Barack Obama for his speaking style and bipartisan message of hope and unity.

The Spanish-speaking 46-year-old former punk rocker and avid skateboarder got within three percentage points of upsetting Cruz in the country's most populous Republican stronghold. His post-election missives have fueled interest from Democratic donors and the highest levels of the Democratic Party — including from Obama himself — that the right candidate could turn the reddest states blue in the next election cycle.

O'Rourke launched his presidential campaign by telling reports in Keokuk, Iowa, that he plans to "run the largest grassroots campaign this country has ever seen." Until now, there had been little evidence that his entry into the crowded 2020 Democratic field had generated significant excitement. No new polls have been released since he jumped into the race, and O'Rourke over the weekend refused to release fundraising numbers from his first day on the trail — a standard marker of early interest and enthusiasm in presidential races — which was expected to be O'Rourke's strength after he broke fundraising records during his Senate campaign last year.

"I can't right now," he told reporters who asked about his initial haul, before clarifying himself. "Let me answer better: I choose not to."

O'Rourke also hit several stumbling blocks this weekend, as he was forced to confront controversies surrounding his presidential campaign, including accusations of privilege and sexism, as well as his past involvement with a hacking group. In Iowa, O'Rourke was criticized for joking that his wife raises their kids "sometimes with my help." He later apologized, "Not only will I not say that again, but I'll be more thoughtful going forward in the way that I talk about our marriage – and also the way in which I acknowledge the truth of the criticism that I have enjoyed white privilege."

The reference to O'Rourke's white privilege comes as liberal critics have expressed concern that O'Rourke, a high-profile, largely centrist Democratic candidate, stands out in a crowded Democratic field that is increasingly non-white, female and progressive. A conservative group, Club for Growth, attempted to dampen support for O'Rourke in Iowa by releasing an ad that points to his privilege as a white man. The Texas Democrat also came under scrutiny after he told Vanity Fair in an interview published last week that he was "born to be in it" – referring to the 2020 presidential election" – and want to do everything I humanly can for this country at this moment."

Although O'Rourke's campaign had a rocky rollout, his massive fundraising haul is a clear indication the Texas Democrat will have an opportunity to re-establish his footing – if he has not already done so.