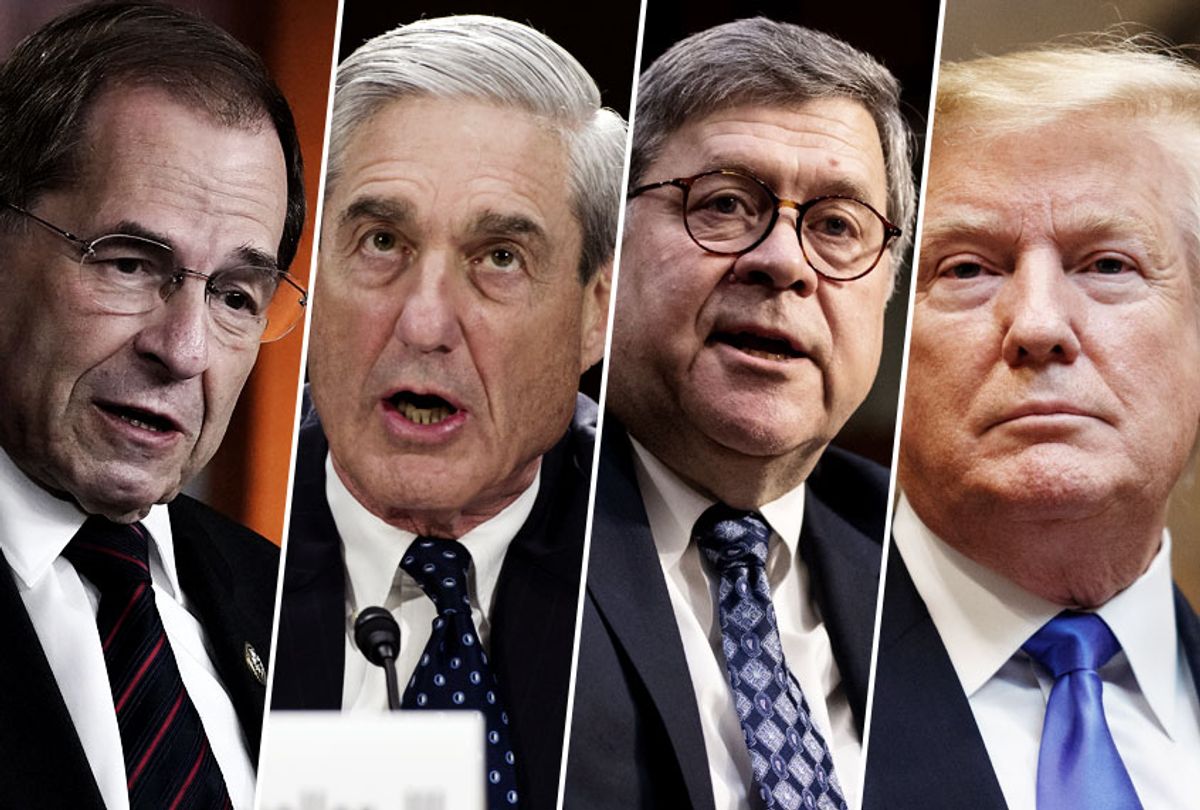 Democrats on the House Judiciary Committee plan to subpoena the Department of Justice as early as Friday for all of special counsel Robert Mueller's findings throughout his nearly two-year investigation into foreign interference in the 2016 presidential election, multiple news outlets reported, as they brace for a lengthy legal battle against President Donald Trump's administration for access to the full report in the wake of Attorney General William Barr's anticipated redactions.

House Judiciary Committee Chairman Jerry Nadler, D-N.Y., has refrained from issuing subpoenas for Mueller's full report covering his probe examining allegations of whether Trump's campaign conspired with Russia during the 2016 election cycle or the president illegally obstructed the inquiry, as well as for the testimony of individuals questioned during the special counsel's investigation until Barr releases the report Thursday. Democrats on the committee and beyond have made it clear that the redacted document Barr intends to release would be insufficient and incomplete. Lawmakers are prepared to go to court to obtain Mueller's full report along with underlying evidence.

The House of Representatives sent a clear message to the attorney general last month when it unanimously passed a nonbinding resolution demanding that lawmakers be allowed to read Mueller's entire report and the public be permitted to see as much as the law allows. The same measure was blocked three times in the Republican-controlled Senate.

Barr has resisted requests from Democrats that he provide a copy of Mueller's entire report without redactions to  Congress, arguing he cannot legally release evidence collected by the grand jury. He said he does not intend to ask the judge presiding over the special counsel's grand jury to permit the release, noting Nadler could make that request himself. Barr further identified four areas of information that will be redacted: grand jury material; information that could "compromise sources and methods" used in intelligence gathering; findings that could jeopardize ongoing investigations; and anything that would "unduly infringe on the personal privacy and reputational interests of peripheral third parties" associated with the investigation.

Barr is not required by the regulations governing the special counsel to share the report with the public or notify lawmakers of more than "brief notifications, with an outline of the actions and the reasons for them."

Mueller announced the completion of his wide-ranging probe into the president's campaign and foreign election meddling late last month. Barr set off a political firestorm after he released a four-page summary of the special counsel's report to Congress, in which he indicated Mueller had not found evidence of criminal collusion or conspiracy between Trump's presidential campaign and Russia during the 2016 election. In his summary Barr noted that while Mueller's report "does not conclude that the president committed a crime, it also does not exonerate him." Trump has praised Barr's review, claiming it to be a "total and complete exoneration."

Democrats, meanwhile, have dismissed Barr's summary of Mueller's report, arguing it is both incomplete and insufficient. They have zeroed in on Mueller's decision to punt on whether Trump had obstructed justice, which Barr claimed "leaves it to the attorney general to determine." Barr said he and Deputy Attorney General Rod Rosenstein concluded Mueller's findings were "not sufficient to establish that the president had committed an obstruction-of-justice offense," which Democrats said warrants further examination and the release of the full report. Even some prosecutors who worked for Mueller have said Barr did not accurately represent their findings after he received the report and shared its main conclusions.

"I have said, and I'll say again, 'No thank you, Mr. Attorney General. We do not need your interpretation. Show us the report, and we can draw our own conclusions. We don't need you interpreting for us,'" Pelosi said at a recent news conference. "It was condescending, it was arrogant and it wasn't the right thing to do. The sooner they can give us the information, the sooner we can all make a judgment about it."

Rep. Jamie Raskin, D-Md., a senior member of the House Judiciary panel, said Barr's refusal to release Mueller's full report "seems like the smell of whitewash and a cover-up is getting thicker and thicker."

"We need to know what happened, and we need to correct the record," he said. "Because all we have right now is that four-page press release that the attorney general put out at the beginning of the week."

Barr's refusal to provide Congress with the full report — and his statement to senators last week that he believed "spying did occur" against the president's 2016 campaign — has drawn condemnation from Democrats who have insisted the attorney general's judgment is not the final word.

The president, who has stepped up his attacks in recent days as the possibility of damaging information in Mueller's redacted report appears to grow, has long claimed that alleged anti-Trump bias at the FBI and the Justice Department spurred federal investigations into his campaign's alleged ties to Russia during the 2016 election, demanding those intelligence officials be investigated themselves. Barr recently indicated his intention to investigate the origins of Mueller's probe, as well as various counterintelligence decisions made by FBI and the Justice Department officials, bolstering some of the president's allies who have vowed to expose a "deep state" conspiracy, which claims there is a covert network entrenched inside the government working to undermine Trump.

It remains unclear whether the White House would move to invoke executive privilege in an attempt to keep portions of the report from Congress and the American public. Barr has said publicly that he has "no plans to submit the report to the White House for a privilege review."

The attorney general also stated he would make himself available to testify before the Senate and House Judiciary Committees next month after the report is released. He is scheduled to appear before the panels on May 1 and May 2 for hearings about Mueller's investigation and report.

Rep. Doug Collins of Georgia, the top Republican on the House Judiciary Committee, also asked the panel to invite Mueller to Capitol Hill to testify.

"If you seek both transparency and for the American public to learn the full contours of the special counsel's investigation, public testimony from special counsel Mueller himself is undoubtedly the best way to accomplish this goal," Collins wrote in a letter to Nadler.