Over and over, political comedians are taking our national values more seriously than our politicians do 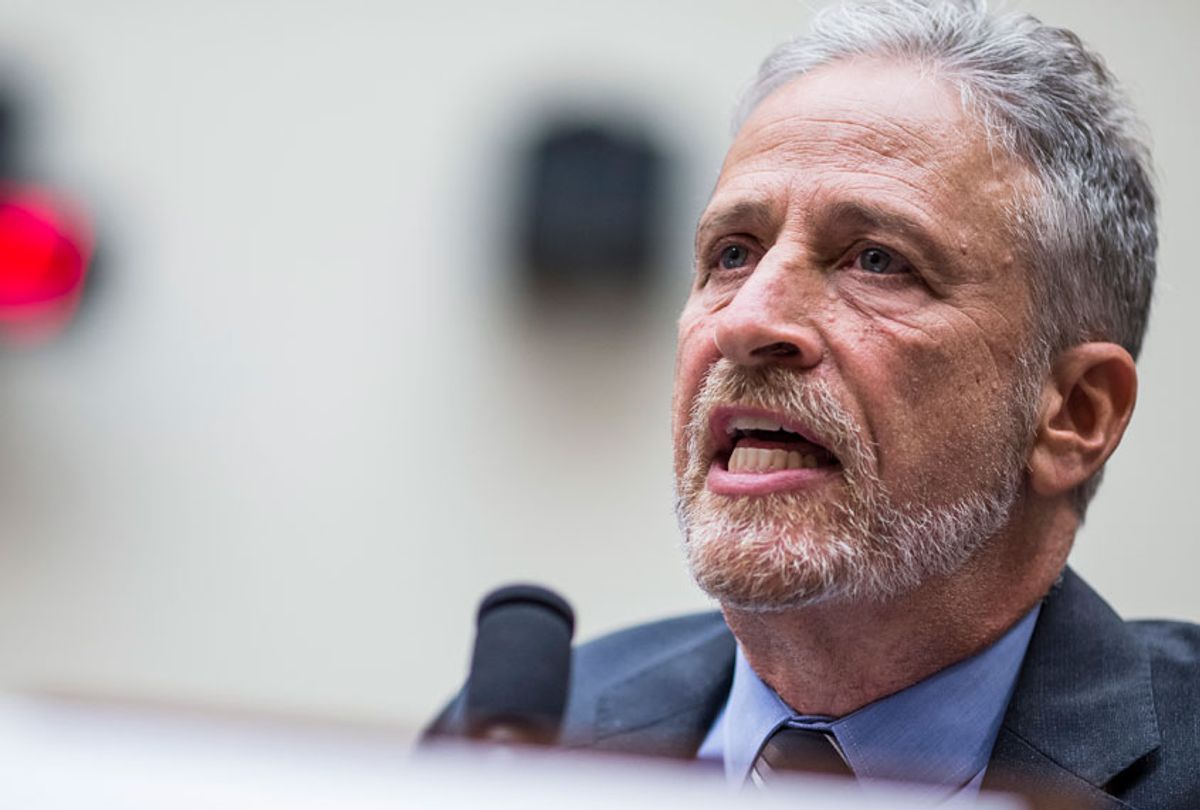 On Tuesday, June 11, legendary satirical comedian Jon Stewart came out from retirement to testify before the House judiciary committee regarding the September 11th Victim Compensation Fund. The fund was established to support 9/11 First Responders and is reportedly facing cuts of between 50-70%.  Stewart, who has long been a champion of support for the First Responders, made an impassioned plea to Congress to do their jobs and pass legislation to permanently and fully fund support for the victims.

“Behind me, a filled room of 9/11 first responders. And in front of me, a nearly empty Congress,” Stewart riled. “Sick and dying, they brought themselves down here to speak to no one. Shameful. It’s an embarrassment to the country and it’s a stain on this institution.”

Using his characteristic sharp wit, Stewart underscored the difference between the work ethic of the 9/11 First Responders and those in Congress, “They responded in five seconds. They did their jobs [with] courage, grace, tenacity, humility. Eighteen years later, do yours.”

Stewart’s rant has now gone viral and ideally will, in fact, push Congress finally to do their jobs and fully fund support for the 9/11 First Responders. But that’s not the real story here. The real story is that ever since 9/11 comedians have increasingly worked to defend the values of our nation, oftentimes more so than politicians themselves.

Stop and consider what an inversion this has become. Typically the role of the satirist is to call out the flaws in the system, to speak truth to power in a witty way, to expose hypocrisy, and to mock hubris and folly. Stewart, when he hosted “The Daily Show” on Comedy Central, certainly did all that and more. And today his legacy is that we have a broad slate of sharp-witted satirists continuing the tradition.

But something odd happened to satire in the United States after 9/11. Suddenly, it was the court jesters who were taking on the role of defenders of our values and our core institutions. Sure, the comedians still made fun of the emperor with no clothes, or the orange-faced president, but they did more than that. They became role models for engaged citizenship, they defended American values, and they redefined patriotism.  Satirical comedians, who typically focus on questioning values and institutions, rose up to protect them.

Stewart has been recognized for the role that he played in mentoring a range of comedians, each of whom is using satirical comedy to elevate the national conversation. Stephen Colbert, Samantha Bee, John Oliver, Trevor Noah, Hasan Minhaj and others all acknowledge his efforts to encourage and develop their work.

But less attention has been paid to Stewart as a model American, to the way that he transformed political comedy in the United States from a source of critique to a source of patriotic leadership.  Over the course of the years that Stewart hosted his show for Comedy Central he did far more than serve as a voice of ironic commentary on national crises and political follies; he increasingly became an advocate for American values.  While he regularly recognized the various ways the country had failed to live up to its ideals, he remained convinced that the goal was to keep striving to attain them. And he was especially committed to using those ideals to counter the fear-mongered, hate-filled, fact-averse vision of patriotism espoused by the far right and visible on Fox News and via pundits like Rush Limbaugh.

In the post-9/11 days, Stewart was not alone in this mission. He was accompanied by Stephen Colbert, who hosted “The Colbert Report” for Comedy Central in the time slot after Stewart. Colbert appeared in-character as a bloviating pundit, but central to the character was the way that Colbert mocked right-wing versions of patriotism that are more bluster than substance. Swooping in on the back of a bald eagle during the opening credits to his show and then sitting behind a desk surrounded by Americana, Colbert mocked the way that that the right had co-opted the idea of American patriotism. Both Stewart and Colbert worked to expose the hypocrisy of the right, which often imagined itself as the nation’s true patriots. But the key is that they did more than just expose hypocrisy and question hubris; they actually engaged in various efforts to strengthen democratic institutions.

Stewart championed legislation to support the needs of the 9/11 First Responders. Colbert, too, testified before Congress in 2010 on behalf of migrant labor.  Stewart and Colbert held a rally together on the National Mall in advance of the 2010 midterm elections. That event focused on the fact that the nation was suffering under the weight of right-wing divisive rhetoric and they argued that citizens needed to fight to champion the US tradition of reasoned debate.  Colbert also ran for President, twice, in an effort to expose the undemocratic nature of our campaign finance laws. Stewart and Colbert used their satire to offer a different version of patriotism: one that is compassionate, reasoned, democratic and just.

This all set the stage for the work that political comedians are doing today in the era of the Donald Trump presidency, where the disconnect between the slogan “Make American Great Again” and the administration’s dehumanizing policies feels like a sick joke. If patriotism under George Bush seemed like a sad performance, then under Trump it has become a charade. Think, for example, of the time that George W. Bush appeared in a flight uniform behind a banner reading “Mission Accomplished” in a far-from-stable Iraq.  Then compare that to the Donald Trump administration requesting that the USS John McCain be hidden from view during the president’s trip to Japan.  They are both egotistical insults to those who fight to defend our nation; but one is simply absurd and petty.

So, just as we have transitioned from Bush’s performed patriotism to Trump’s farce, we can note the rise in comedians stepping up to remind the nation of our values and our democratic institutions. In the wake of the tragic events in Charlottesville, NC, during the “Unite the Right” rally that led to the murder of a Heather Heyer, Seth Meyers reprimanded President Trump on what it means to be a leader in response to Trump’s repulsive “all sides” have some blame comments. Meyers stated: “You can stand for a nation, or you can stand for a hateful movement. You can’t do both.”

Both Hasan Minhaj and Michelle Wolf schooled the Trump team on the First Amendment when they hosted the White House Correspondents’ Association Dinner in 2017 and 2018 respectively. John Oliver regularly uses his show on HBO to educate his audience on major issues of significant public interest. And who could forget Jimmy Kimmel’s turn from goofy frat boy humor to emotional champion for universal healthcare — a move that underscores the way that even the most unlikely comedians are advocating for policies that benefit our nation.

In fact, the examples of ways that comedians are serious about defending national institutions and committed to advancing national ideals abound. This uncanny transition where comedians don’t just mock institutions, they actually defend them, has happened for a range of reasons, but one thing remains clear: the public trusts comedians often more than politicians or the press and they also learn more from them.

This is why Stewart’s appearance at the Capitol on behalf of the 9/11 First Responders simply confirms the fact that it is regularly the case that political comedians take our national values more seriously than our politicians.  During his speech, Stewart expressed frustration and outrage that the brave men and women who defended us in the immediate moments after the 9/11 attacks had to waste precious time continuing to ask Congress to act on their behalf. He then pointed out that there wasn't a single lawmaker on the committee who on the anniversary of 9/11 failed to tweet, "Never forget the heroes of 9/11. Well here they are!" Stewart pointed to the men and women sitting around him. "And where are they?” he asked as he gestured to the empty committee seats. “It would be one thing if their callous indifference and rank hypocrisy were benign, but it's not.”

“I’m sorry if I sound angry and undiplomatic, but I am angry and you should be too,” Stewart added. Stewart, of course, is right. We should all be angry over this issue. But what should really anger us is the fact that we live in a nation where comedians defend our national heroes more vigorously than our politicians do.