In a new interview with Monica Lewinsky, Oliver charges us to think about power and public profile before piling on 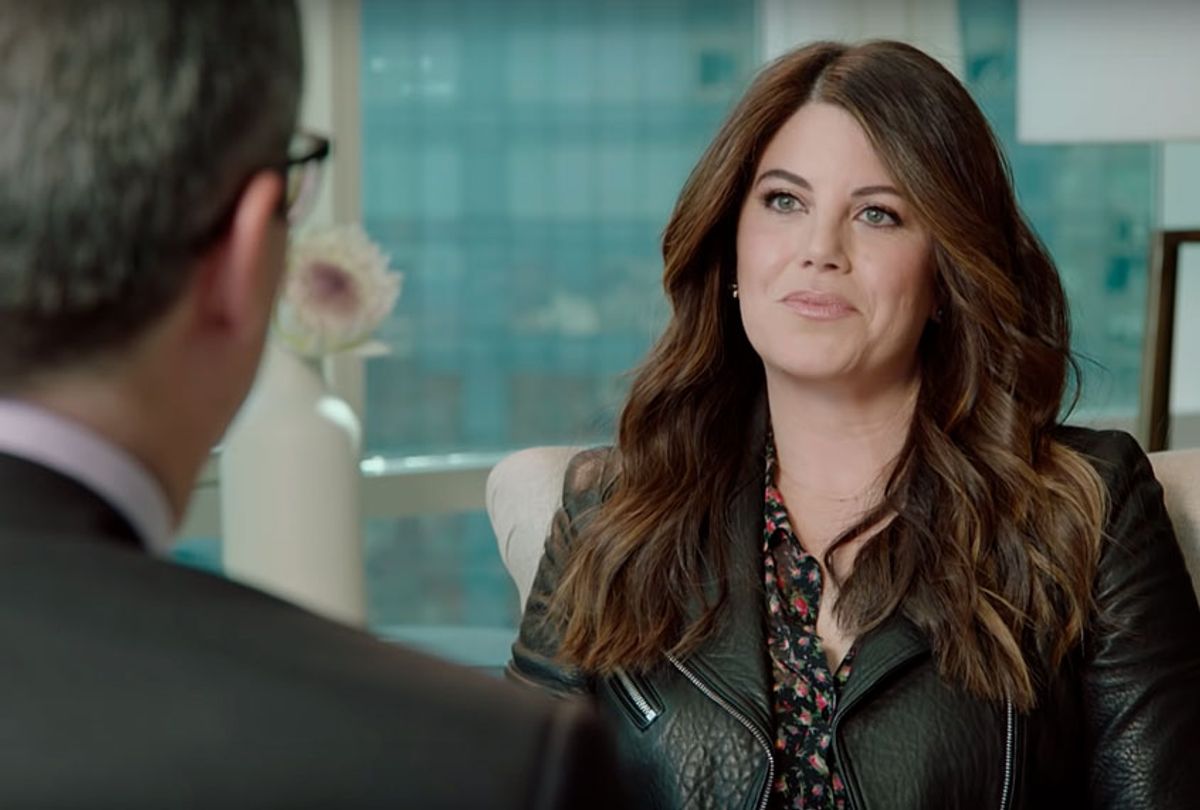 On John Oliver's latest episode of "Last Week Tonight," he took on a topic that has been debated ad nauseum online: public shaming. "Thanks to the Internet, it has never been easier to pile on to a public shaming," Oliver said at the top of Sunday night's show. "In fact, it's now one of America's favorite pasttimes."

A quick scan of the news and response to it in recent weeks offers many examples of the public outrage that has often been polarizing and pervasive — a phenomenon Oliver describes as "a golden age of Internet shaming."

Just this year, we've seen vehement responses directed at a MAGA hat-wearing Covington Catholic school student, who is now suing CNN and the Washington Post; as well as all sides — in defense and in condemnation of — of the entire saga surrounding actor Jussie Smollett and his reported hate crime, which the Chicago Police Department has called a hoax and for which Smollett has now pleaded not guilty to 16 felony charges for allegedly lying to the cops. We also saw strong backlash to Kevin Hart's past offensive tweets and the should-he/should-he-not host the Oscars debate, and reacted to Liam Neeson's horrific admission that he almost committed a racist murder out of a misplaced sense of revenge.

Most recently, my own timeline has been inundated with whether or not Chelsea Clinton is the real victim in the Christchurch, New Zealand mass shooting, after being called out at a vigil for the way she piled on in the shaming of Rep. Ilhan Omar and thus contributed to Islamophobia. A similar conversation took place just a week before after Meghan McCain managed to center herself in the debate over whether Omar used anti-Semitic tropes in her critique of the Israel lobby and U.S. empire.

"We're basically goldfish," Oliver said, "except instead of discovering a new castle in our bowl every nine seconds, we find something new to be outraged at online."

But Oliver maintains that public shaming — like everything that is more complex than it's often treated by fast-reacting media reports — should not be analyzed in black and white terms. He uses the outrage over Fox News' Tucker Carlson and his recently unearthed, offensive remarks as an example of how the pile-on can be well-directed and used to hold powerful people accountable.

"I would argue that Tucker is actually a good example of an Internet pile-on being merited," Oliver explained. "He's a public figure, he made his comments publicly, they are appalling, and he's standing by them. But clearly, it's not always that simple, because when misdirected, Internet pile-ons can completely destroy people's lives."

Oliver charged his viewers to think critically about "the power of public shaming" and to reflect on the context, consequences and nuance of each individual situation at hand. "Because often, it is not a famous figure who's on the receiving end of it," he added. "On a seemingly daily basis, ordinary people who did not ask for attention can get sucked into the spotlight."

Oliver said while the nature of "Last Week Tonight" and comedy more broadly is to make fun of people, the show's writers actually think deeply about who might be publicly shamed in the process, weighing the target's power along with other factors. "When joining into a pile-on, there is a lot to take into account," Oliver continued. "When millions of people all feel the need to weigh in and do it potentially for years, the punishment can be vastly disproportionate to the offense." If Carlson was an example of warranted outrage, on the flip side Oliver highlighted the decades of pile-on against Monica Lewinsky as an example of the dangers.

Recounting the media's obsession with and onslaught against Lewinsky — and she has addressed how intense and destructive it was to her life, especially at such a young, vulnerable age — Oliver reflected on how he contributed to the circus himself. "Look, my hands are not clean here either," he said. "I wasn't in the U.S. at the time, but 10 years after the fact, I was in a 'Daily Show' piece marking the tenth anniversary of the scandal, above a graphic reading '10 suckin' years,' which is gross, it's gross."

Oliver went on to show the hypocrisy of someone like former late night host Jay Leno, who pummeled Lewinsky relentlessly with tasteless, sexist jokes and never apologized, and had the nerve to say recently that he'd like to see a return of "civility" to the late night landscape. Oliver's message to Leno was straightforward: "Go f**k yourself."

In this empathetic and powerful interview, Oliver closed the show by talking to Lewinsky about the depth and decades of the piling on, as well as the issue at large, as she is now an advocate who speaks out against shaming and bullying. Lewinsky reflected on the slut-shaming, the humiliation, the pain, the portrayal of herself that bore so little resemblance to who she was and yet was globally famous, and the ruthless attacks on every aspect of her appearance, from her weight to her perceived (un)attractiveness. She also addressed the enduring aftermath, which for many years resulted in her inability to gain employment and to make a living.

In response to whether she ever considered changing her name, Lewinsky replied, that in part, her decision was based on principle. "Bill Clinton didn't have to change his name," she said. "Nobody's ever asked him did he think he should change his name. And so I think that was an important statement. I'm not proud of all of the choices I've made in my life, but I am proud of the person I am. I am not ashamed of who I am."

Still, despite her own intimate experience bearing the full weight of the power of public shaming, Lewinsky said that it's important to move away from the binary of should we or should not publicly shame. "I do think there's a spectrum of behavior on which we can sort of judge as a society — is this where shaming is effective to change social behavior, or is it damaging?" she said.

The episode was a fascinating and deeply relevant exploration of the complexity of public shaming. Social media makes it easy to pile on and to do it somewhat anonymously, with many of us often giving no thought to the consequences of such an avalanche of critique and humiliation on an individual. And yet, it's clear that sometimes, online backlash and shaming works to further worthy causes.

Black Lives Matter began as a hashtag following the acquittal of Trayvon Martin's killer George Zimmerman, and while it has evolved into a social movement, it remains a powerful hashtag that brings visibility to black victims of police killings and amplifies other forms of systematic racism. And in some cases, the persistency of the outrage, which often begins online, has contributed to police departments or individuals being held accountable for such racist violence. #MuteRKelly is another grassroots public shaming campaign that predated the "Surviving R. Kelly" docuseries, and certainly helped to bring forth the consequences that R. Kelly has finally begun to face for his alleged sexual assault of minors and young women.

Oliver's blueprint in assessing the potential harm of public shaming is sound. Is the person at the center a public figure? Do their comments or actions bring harm and cause pain? And most importantly, are they powerful? For the majority of situations that encourage social media outrage, these questions can be answered immediately. But a quick reflection on them could do much to shift us away from "a golden age of Internet shaming" and to an emphasis on minimizing harm and holding those, most especially with power, accountable.