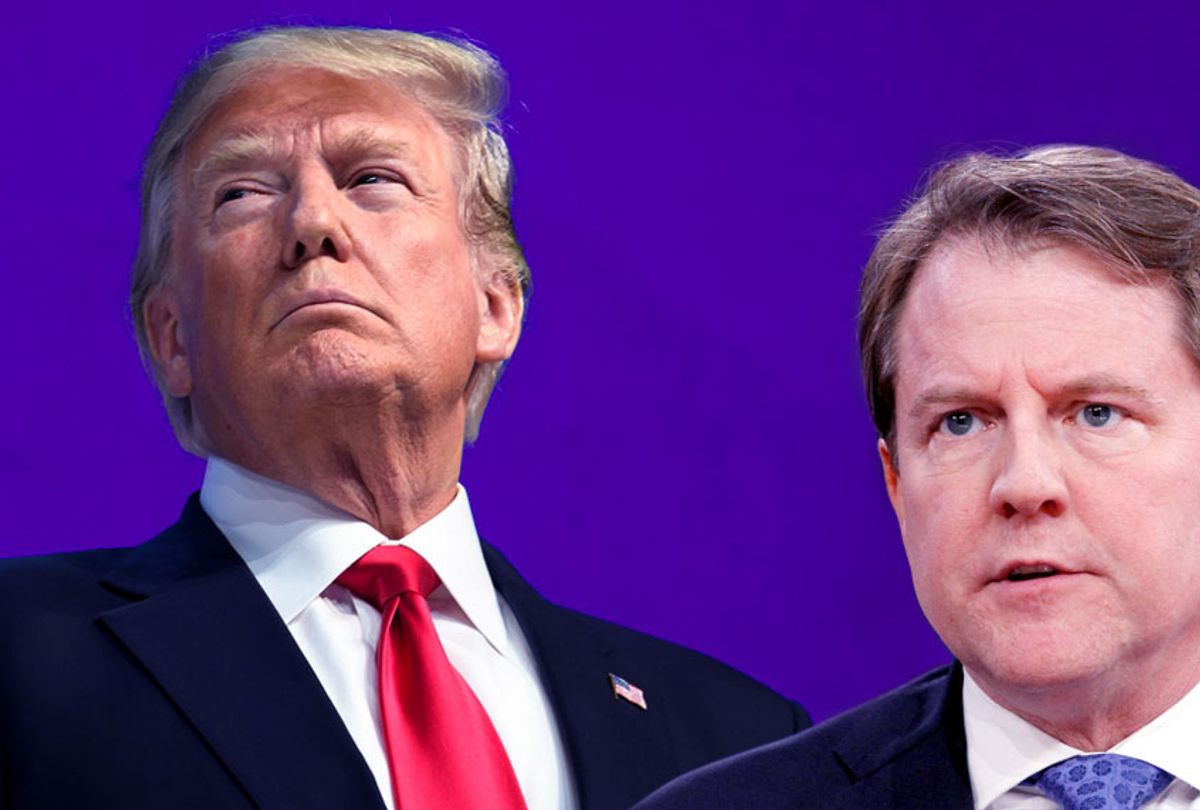 Trump told ABC News’ George Stephanopulos that McGahn “may have been confused” when he told Mueller that Trump repeatedly ordered him to have then-Deputy Attorney General Rod Rosenstein fire the special counsel.

"The story on that very simply, No. 1, I was never going to fire Mueller. I never suggested firing Mueller," Trump said.

"Why would he lie under oath?" Stephanopoulos pressed.

"Because he wanted to make himself look like a good lawyer," Trump replied. "Or he believed it because I would constantly tell anybody that would listen — including you, including the media — that Robert Mueller was conflicted. Robert Mueller had a total conflict of interest."

"And has to go?" Stephanopoulos asked.

McGahn testified to Mueller’s team that Trump repeatedly pressed him to have Mueller fired over what the president perceived as the special counsel's conflicts of interest.

McGahn told prosecutors that Trump called him in June 2017 and “directed him to have the Special Counsel removed,” according to the Mueller report.

McGahn said Trump called him twice to direct him to call Rosenstein and “say that Mueller had conflicts that precluded him from serving as Special Counsel.”

“You gotta do this. You gotta call Rod,” McGahn explicitly quoted Trump as saying, despite Trump’s claim in the ABC News interview. McGahn said Trump called him a second time and again said, “Mueller has got to go.”

McGahn said Trump’s “asserted conflicts were ‘silly’ and ‘not real,’” according to the report. McGahn was “perturbed” by the request and “did not intend to act” on it, likening it to the 1973 “Saturday Night Massacre,” when Richard Nixon’s attorney general and deputy attorney general quit after the president ordered them to fire Archibald Cox, the special prosecutor then investigating the Watergate scandal. (Cox was ultimately fired by Robert Bork, then the solicitor general and later a rejected Supreme Court nominee.)

McGahn also testified that Trump later tried to convince him to deny news reports about the request to have Mueller fired.

McGahn was not the only one to testify to this chain of events.

Former White House chief of staff Reince Priebus told the special counsel’s team that McGahn called him after Trump’s request and said the president had asked him to “do crazy shit.”

Priebus also testified that he and former White House strategist Steve Bannon had to talk McGahn out of quitting over Trump’s request.

Former White House chief of staff John Kelly also confirmed the meeting in which Trump tried to convince McGahn to deny the news reports about the order to have Mueller fired, describing the meeting as “tense.”

Corey Lewandowski, Trump’s former campaign manager, who remains a close ally, separately testified that Trump tried to get then-Attorney General Jeff Sessions to “unrecuse” himself from the Russia probe in hopes of limiting the scope of Mueller’s investigation.

After the release of the Mueller report, House Democrats issued a subpoena to McGahn, but Trump blocked his testimony by invoking executive privilege.

During the ABC interview, Stephanopoulos asked Trump why he didn’t agree to be interviewed by Mueller if he is so adamant these events did not occur.

"Not on obstruction," Stephanopoulos pointed out.

Though Mueller did not find evidence of a criminal conspiracy between Trump and Russia, he did detail numerous instances in which Trump’s actions met the criteria for obstruction of justice charges. Mueller wrote that Justice Department guidelines precluded him from indicting the president but added in his report and subsequent press statement that if his team “had confidence that the president did not commit a crime, we would have said so.”