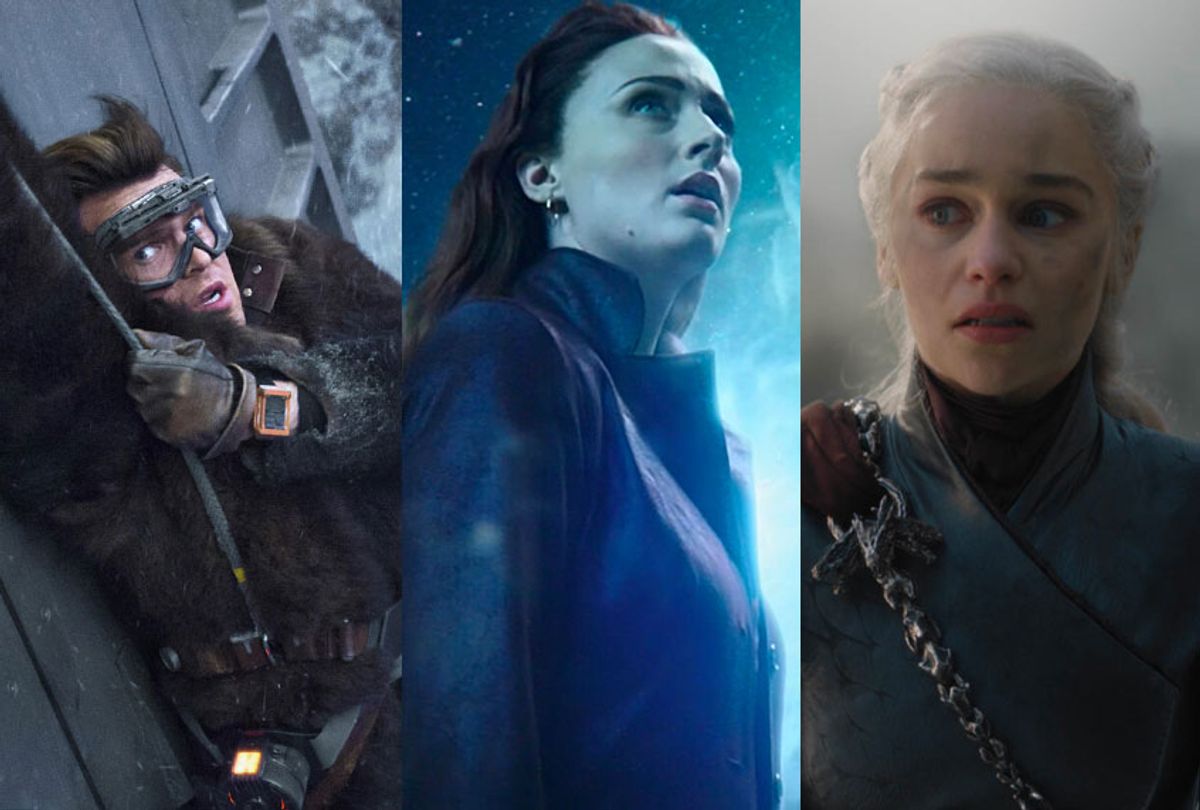 This article contains spoilers for "X-Men: Dark Phoenix" and the "Game of Thrones" final season.

"X-Men: Dark Phoenix" — which I reviewed and found to be wanting — isn't just a flop. It is a financial failure of epic proportions.

"Dark Phoenix" has the lowest opening weekend in the history of the "X-Men" franchise, the biggest second-weekend dropoff ever for a superhero movie and the ignominious distinction of being the first "X-Men" movie to not top the box office when it was released. At the time of this writing, it has eked out just over $200 million worldwide, meaning it will almost certainly lose money when all is said and done. As it just so happens, the "X-Men" series has been sold off to Marvel and so the cinematic universe launched with the first "X-Men" film in 2000 was scheduled to end on its own anyway. If that wasn't the case, however, "Dark Phoenix"'s low gross almost certainly would have prompted executives to consider killing the series on its own.

When a movie fails this hard, both qualitatively and financially, a postmortem is called for. In the case of "Dark Phoenix," it is helpful to compare it to other recent franchise entries that were widely perceived as failing.

The most obvious analogy that comes to mind is "Game of Thrones." While I agree with my colleague Amanda Marcotte that Season 8 got more flak than it deserved, one criticism that I feel is valid was the fact that the season felt rushed. Major story events like the death of the Night King and Daenerys Targaryen becoming a villain make sense in the broader context of plot points that had been previously laid out in the series, but the accelerated pacing left many viewers with the sense that these developments came out of nowhere instead of feeling earned. Potentially significant character moments like Cersei Lannister's miscarriage ended up edited out of the final product. The ultimate problem wasn't that the plot was a bad one, but that the execution seemed off. To paraphrase the observation of one friend who was a big fan of the series, it felt the writers were checking off boxes on a list instead of having fun telling their story.

A similar point can be made about "Dark Phoenix." There were a few interesting ideas in the story, but none of them felt earned. Take Professor X/Charles Xavier (James McAvoy): His storyline is supposed to focus on how he has allowed his ego to get the better of him, but although we hear characters tell him that this is the case, we don't actually see it. He is told off by one character for putting his students in harm's way to save the world, but he has done this in previous movies without anyone batting an eye and they were the only people who could save the world, so it's not like he didn't have a good reason for acting as he did. Similarly, when another character abandons Professor X for blocking the traumatic memories of the titular Jean Grey/Dark Phoenix (Sophie Turner), he likewise acts as if this is a sign that Professor X is driven by ego. Even if one disagrees with Professor X's practical reasons for acting as he did (to protect Grey from pain, to protect the world from her god-like powers), the better moral argument against it is that he violated her rights. It is a stretch to argue that this was egotism.

Another problem with "Dark Phoenix" can be found in one of the biggest disappointments of 2018, the "Star Wars" spin-off movie "Solo" (which I also panned in my review). As I observed in my review at the time, there was very little fun to be had in any of the scenes in "Solo"; the movie was so determined to move along its various plot elements that the efforts at humor, sexual tension and building suspense felt like half-hearted afterthoughts. For instance, as I noted about the heist plot elements in "Solo," "they have none of the wit, panache or flair that you see in great heist films, like 'Jackie Brown' or 'The Score.' As a result, the action scenes in which they take place are numbing and boring rather than fun, with the characters left seeming like pawns being moved around a chess board even when we're supposed to be developing connections with them."

The same thing is true of "Dark Phoenix." There isn't any verve to the action scenes, none of which are memorable; the villains are equally forgettable, seeming like rip-offs of the shapeshifters from "Captain Marvel" and having generic supervillain motives instead of the complex philosophical justifications that animate the best "X-Men" antagonists; and character development, which is always one of the strong points of any good "X-Men" movie, is virtually non-existent here. Much like "Solo," "Dark Phoenix" doesn't really seem to be trying to tell a compelling story of its own and instead hopes that audiences will give it points for relying on the good will built up from previous, better installments. When fans can sense that a movie is doing that, it turns them off.

Finally there is a comparison to be made to a 2018 movie that didn't quite flop but definitely disappointed, both among critics like myself and at the box office — "The Predator." While the "Predator" franchise isn't as popular as "X-Men," "Game of Thrones" or "Star Wars," it has an international fanbase and has produced movies which grossed hundreds of millions of dollars. The problem with "The Predator" was that, quite simply, its story felt like a bland rehash of tales that other "Predator" movies had told before. There were some interesting twists here and there (such as new designs for Predator-based animals), but for the most part it never even tried to break new ground. When a movie feels like a retread instead of an original entity, audiences aren't going to be convinced to want to see it.

This, once again, was true of "Dark Phoenix," which even from its trailers felt like a blatant rip-off of "X-Men: The Last Stand" (in term an adaptation of the comics' "The Dark Phoenix Saga"). Aside from the fact that the filmmakers made the puzzling decision to repeat the plot beats of a widely derided trilogy capper, the film didn't even do anything particularly inspiring with the old material. Sophie Turner's Jean Grey goes through the exact same motions as Famke Janssen in the 2006 movie — she grapples with her newfound and unchecked power, kills people she loves, realizes that she's a monster and arrives at a bittersweet character resolution. Because nothing new was being brought to the table, and the old material being referenced wasn't exactly well-liked, "Dark Phoenix" could neither benefit from being a beloved remake or an imaginative reinterpretation. Like "The Predator," it just kind of sat there on the screen, listless and lifeless.

There are some important lessons that the makers of future blockbusters can learn from this. First, when telling a story, it is important to commit to making the characters, plot developments and other narrative accoutrements actually work on their own merits. If the writers are simply rushing from one plot point to the next instead of making everything feel real and worthy of emotional investment, audiences will intuitively notice and penalize you for it. In addition, a movie has to have fun telling its story; if it feels like a chore to make it, it will also feel like a chore for those who have to watch it. Finally, it is crucial to bring something new to the table beyond a few interesting ideas sprinkled here and there. Barring that, if you're going to do a remake, make sure the story that you're remaking is one that audiences actually want to have told to them.

If future filmmakers can learn these lessons from the travesty of "Dark Phoenix," it won't have been a total waste.