There are four presidential candidates of Jewish descent — the most ever. Does it matter?

There are more Jews than ever in the candidate field, and no one much cares. What does this say about America? 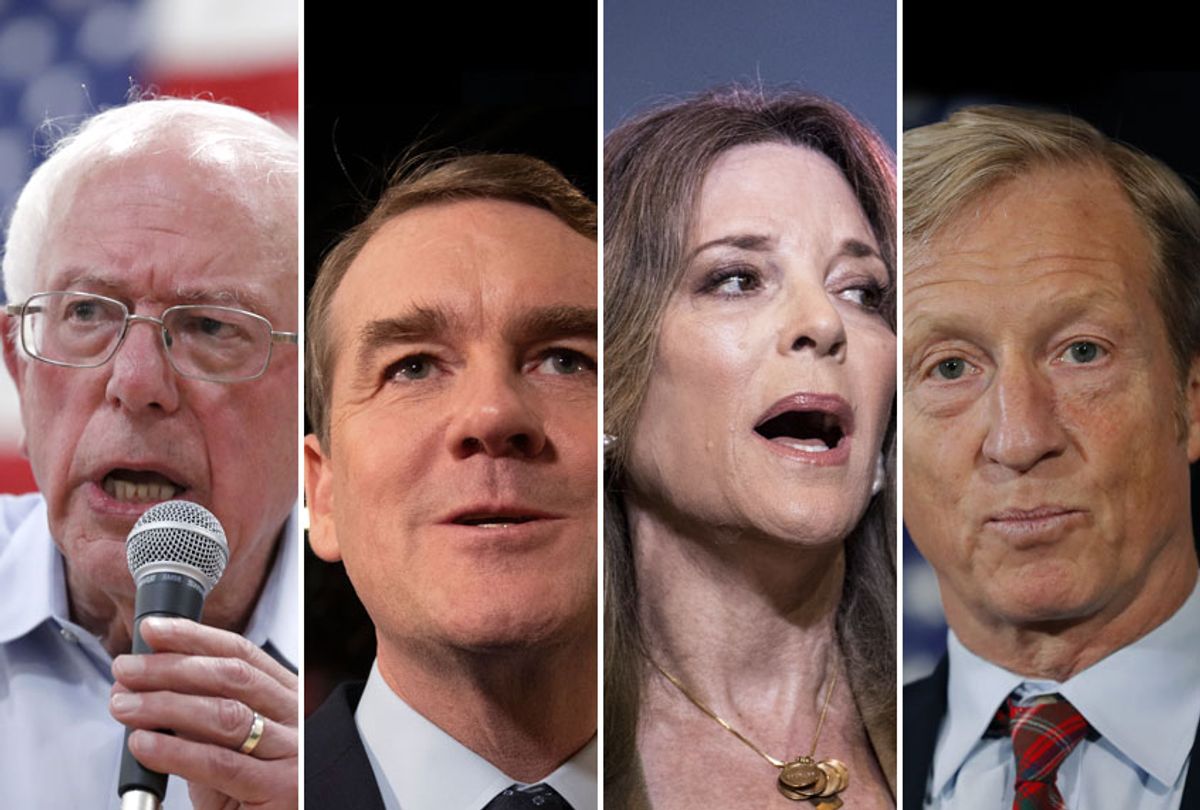 There is a famous exchange in the 1892 Sherlock Holmes story "The Adventure of Silver Blaze," which captures the remarkable reaction to the unprecedented number of Jewish candidates in the 2020 presidential race. After a Scotland Yard detective asks the titular hero if there is any detail he finds noteworthy about the case, Holmes draws attention "to the curious incident of the dog in the night-time."

"The dog did nothing in the night-time," the detective replies.

"That," Holmes points out, "was the curious incident."

So too with the American public's casual reaction to the number of Jewish candidates in the 2020 race. Of course, the most famous among the bunch is Sen. Bernie Sanders of Vermont, who alone among them can be considered one of the frontrunners. Sanders is not religious and has occasionally been accused of not being sufficiently outspoken about his background. He occasionally has described himself as Polish, to the mild consternation of some in the Jewish community. Yet Sanders has also linked his progressive views to his spirituality, once explaining in an interview that "we are all in this together and that when children go hungry, when veterans sleep out on the street, it impacts me."

Sanders also said in 2016 that he was proud to be Jewish, adding, "Being Jewish is so much of what I am" and explaining that his father's family had been "wiped out by Hitler in the Holocaust. I know about what crazy, and radical and extremist politics mean."

But Sanders is not the only Jewish candidate in 2020 — something that is remarkable in its own right. The first presidential candidate with known Jewish ancestry to run for president was Sen. Barry Goldwater of Arizona, an Episcopalian whose father had been Jewish. Goldwater was the Republican nominee in 1964 — and godfather of the modern conservative movement — but lost the general election by a landslide. After Goldwater came Gov. Milton Shapp of Pennsylvania, the first practicing Jew to run for president, who sought the Democratic nomination in 1976 but was driven out of the primaries early on.

It's a pretty short list after that: Mayor Larry Agran of Irvine, California was a short-lived candidate for the 1992 Democratic nomination and Sen. Arlen Specter of Pennsylvania took a brief run at the Republican nomination in 1996 before dropping out to endorse Sen. Bob Dole of Kansas, the eventual winner.

The best known pre-Sanders Jewish candidate was Sen. Joseph Lieberman of Connecticut, who made history as the first Jewish member of a major-party ticket when he became Al Gore's running mate in 2000. Although Lieberman was initially viewed as a 2004 Democratic frontrunner, he didn't win any primaries and dropped out early. Two other candidates that year, Gen. Wesley Clark and Sen. John Kerry of Massachusetts — the eventual nominee — had Jewish ancestry, although both were Christian.

Obviously none of those candidates became president. Unless we're counting Kerry (a Roman Catholic with a Jewish father), Sanders came closer than anyone previously in 2016, when he was the first Jewish-identified candidate to win an actual primary or receive votes at a party convention. This cycle, he's not even close to the only one.

Sen. Michael Bennet of Colorado has a Jewish mother and Christian father and identifies with both faiths. In the recent presidential debate, he mentioned that his mother had been separated from her family during the Holocaust — a point made to condemn President Trump's policy of separating migrant families at the border.

Self-help author Marianne Williamson — who has said that if she had gotten a better Jewish education, she might have become a rabbi — belongs to a distinct subculture within the Jewish community: the New Agers. (Jewish people have long been disproportionately active in all sorts of countercultural and spiritual movements. So many Jews are also Buddhists it's almost a cliché.)

Finally, there is pro-impeachment billionaire Tom Steyer, the latest Democrat to enter the race, who talked about his Jewish father in his announcement video. Steyer is Episcopalian but has expressed pride in his Jewish heritage — and has been the target of anti-Semitism from the far right.

Should Jews embrace this as a moment of pride? Maybe — and maybe it's hardly even a thing. Hasia Diner, a professor of American Jewish history at New York University, more or less takes the latter view. She wrote by email:

Jews are at this moment in time not so different than others of their class and status. They have come to occupy nearly every nook and cranny of elite America and the fact of Jewish parentage, upbringing and personal life choices are not terribly notable.

While Jewish voters still are lopsidedly on the Democratic side of the line, we have no trouble finding Jews who show up as utterly committed supporters of the current administration and all of its policies — and indeed some of them are its architects at the highest level. The fact that a number of candidates on the Democratic race for the nomination have Jewish connections, or are Jewish, is a reflection of their normalization and their access to the privileges which the society offered them.

"I think it's now been clear, really, since Joe Lieberman, that being Jewish is not an impediment for a candidate in a presidential election," Sarna explained. "All the studies suggest that if anything, he helped the ticket in the Gore-Lieberman election. And we've had Jewish candidates in the primaries since then."

Sarna also identified another dog that did not bark during the 2016 election — namely, the fact that both major-party nominees had Jewish relatives.

"What was so extraordinary and new in 2016 was that it didn't matter who won, there would be a Jewish son-in-law," Sarna said, referring to Ivanka Trump's husband Jared Kushner and to Marc Mezvinsky, the husband of Chelsea Clinton. "So the barrier that being Jewish once posed does not, I think, anymore affect the way people view candidates. There's quite a lot of Gallup data that suggests that people are willing to vote for someone who's Jewish."

I spoke to Sarna shortly before Israeli education minister Rafi Peretz made global headlines by asserting that intermarriage between Jews and non-Jews in America was "like a second Holocaust." Sarna characterized intermarriage as a positive factor in public life, noting that Sen. Kamala Harris, who is herself multiracial, has a Jewish husband.

Historian Deborah E. Lipstadt, a leading scholar on the Holocaust, has argued that Trump enables anti-Semites by refusing to call out white supremacists and other racist groups prone to anti-Semitism, even telling USA Today in January that "while Trump is probably not an anti-Semite, enabling anti-Semites is itself an anti-Semitic act that causes as much damage as something that comes from an ideological anti-Semite."

Finally, anecdotal evidence, including that of this author, suggests that anti-Semitic attacks on social media are commonplace, and nearly always come from right-wingers or Trump supporters. At the same time, a Hudson Institute survey released last month also found American Jews linking rising anti-Semitism to the left, from the controversial remarks of Rep. Ilhan Omar, D-Minn., to campus efforts to shut down pro-Israel speakers and the activities of the Boycott, Divest and Sanctions (BDS) movement.

So is it possible that there could be a major backlash to a Jewish presidential candidate — even though there's no serious evidence of that yet?

"All of us are sensitive to the rise of anti-Semitism," said Sarna. "One of the questions is whether there is a rise in anti-Semites or whether there are the same number of anti-Semites, but they now feel empowered to tweet, to do lots of things they did not feel empowered to do earlier — partly because there's not someone at the leadership level who is condemning that kind of hatred on a regular basis. Hatred of all kinds — against immigrants, blacks, Muslims, Latinos and so on — has seemingly been legitimated, even by the president of the United States."

In my view, we have cause for cautious optimism. The vast majority of Americans do not harbor anti-Semitic views — polls consistently demonstrate this is the case — and it is important not to stir up unfounded fears. Violent anti-Semites unquestionably exist in this country, and as we have learned repeatedly, one individual can cause immense bloodshed.

In a 2017 interview, Joe Lieberman told me that before Vice President Al Gore approached him about being his running mate in 2000, Gore's Jewish friends were anxious about a possible anti-Semitic backlash. On the other hand, his Christian friends unanimously said there would be no problem.

"So obviously," Al joked — he had a better sense of humor than some people gave him credit for — "since I know that there are so many millions more Christians than Jews in America, I was free to make the choice I wanted!"