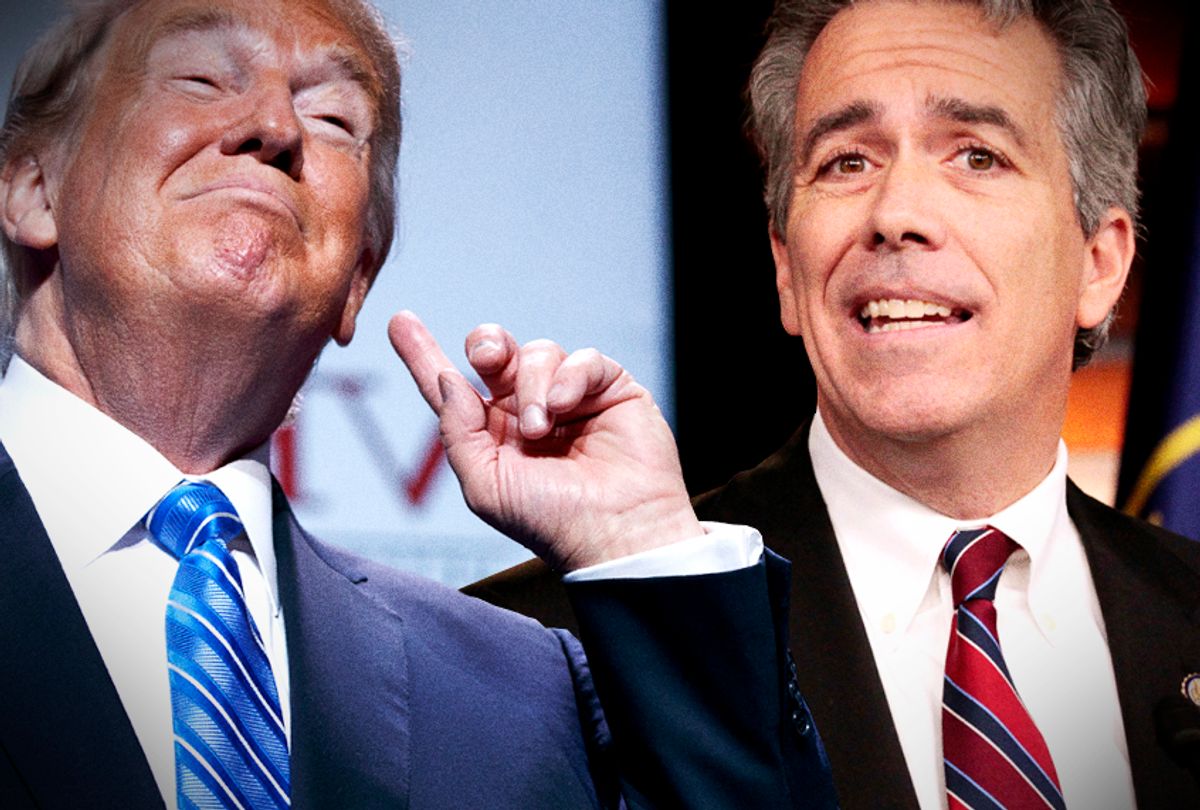 Former Tea Party-backed Rep. Joe Walsh published an op-ed in the New York Times apologizing for his role in helping elect an unfit “racial arsonist” as president and urged his fellow Republicans to challenge Donald Trump in the primaries.

Walsh, who admitted he had previously questioned Barack Obama’s religion and “expressed hate for my political opponents,” wrote that “in Mr. Trump, I see the worst and ugliest iteration of views I expressed for the better part of a decade.”

Walsh called out Republicans who, like him, attacked Obama’s spending but have gone silent as Trump runs up the national debt.

“Trump has increased the deficit more than $100 billion year over year — it’s now nearing $1 trillion — and we hear not a word of protest from my former Republican colleagues,” he wrote. “He abuses the Constitution for his narcissistic trade war. In private, most congressional Republicans oppose the trade war, but they don’t say anything publicly.”

Walsh, who has come under criticism from listeners for espousing anti-Trump views on his radio show, called out the Republican Party for supporting a president whose tariffs amount to a “tax increase on middle-class Americans and are devastating to our farmers.”

“That’s not a smart electoral strategy,” he warned fellow conservatives. “It’s one of the many reasons Mr. Trump is ripe for a primary challenger. In fact, it would buck the historical trend if he didn’t have one. More often than not, unpopular presidents face primary challengers.”

Walsh wrote that he voted for Trump because he opposed Hillary Clinton but now realizes that Trump is “unfit for office.”

“I soon realized that I couldn’t support him because of the danger he poses to the country, especially the division he sows at every chance, culminating a few weeks ago in his ugly, racist attack on four minority congresswomen,” Walsh wrote. “The fact is, Mr. Trump is a racial arsonist who encourages bigotry and xenophobia to rouse his base and advance his electoral prospects. In this, he inspires imitators.”

Walsh implored Republicans to realize that Trump's “dangerous” alliance with Russian President Vladimir Putin, his attacks on intelligence agencies, and his “embrace” of foreign tyrants are “un-American” and has become a “liability.”

It must be said Walsh himself has a long history of inflaming racial tensions, not unlike the president he now attacks. After being elected to Congress from Illinois in the Tea Party wave election of 2010, Walsh declared that Obama was only elected because he was a “black man who was articulate.” After leaving Congress and becoming a conservative radio host, Walsh was kicked off the air in the middle of a show for using racial slurs while discussing the NFL’s Washington Redskins. He blamed Obama for inciting violence against police after a sniper attack on Dallas police. As recently as 2016, Walsh insisted that Obama was a secret Muslim.

"One of the reasons I wrote this op-ed was to apologize — to apologize for the role that I played in putting an unfit con man in the White House," Walsh told CNN. "The country was divided before Trump. That's why we got Trump. I was at the head of that divide, talking about and pushing ideas I believed in.”