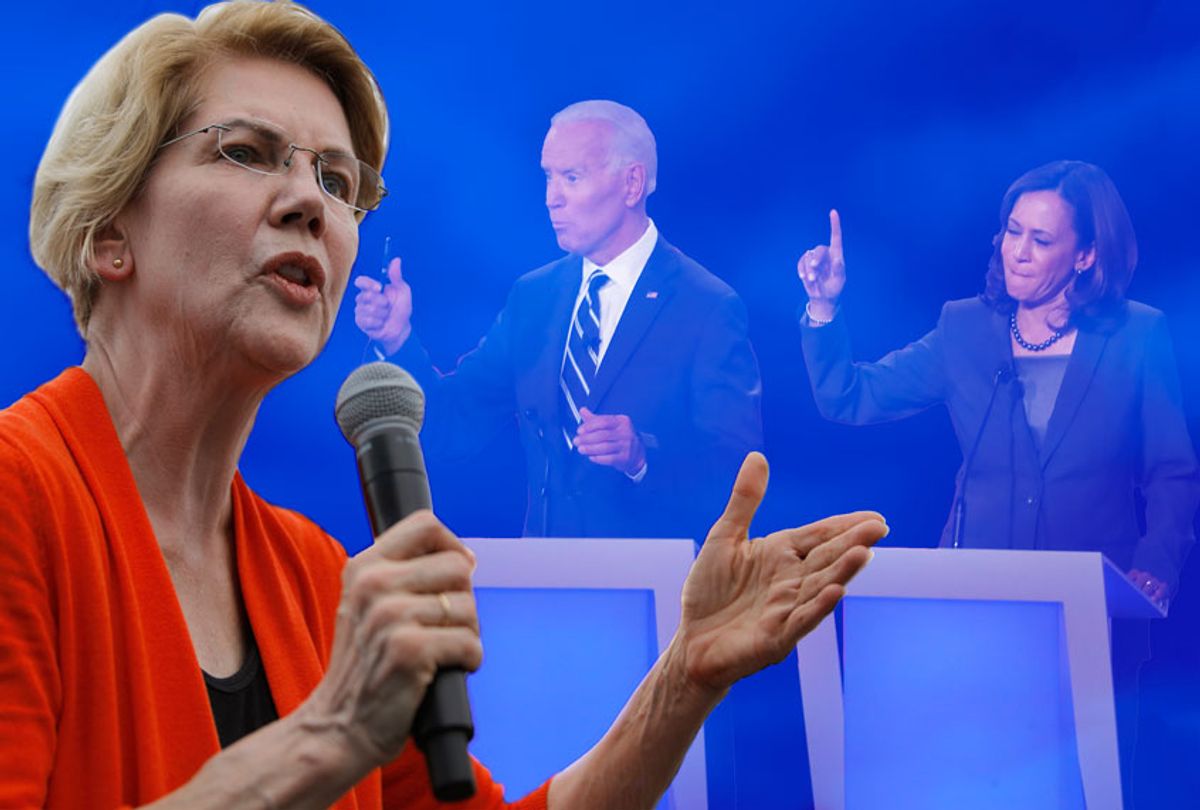 While she does not mention Biden or Harris by name, Warren's plan confronts two past political positions which have come back to haunt her contenders on the presidential campaign trail. Warren targets the controversial 1994 crime bill, which Biden helped write, as well as school truancy, an issue which Harris took a firm approach to as a prosecutor in California.

Warren called for a repeal of the bulk of the 1994 crime bill, which passed with Biden's support when the future vice president was still a senator from Delaware.

"The 1994 crime bill exacerbated incarceration rates in this country, punishing people more severely for even minor infractions and limiting discretion in charging and sentencing in our judicial system," Warren writes in her proposal, which was posted Wednesday to Medium. "That punitive 'tough on crime' approach was wrong, it was a mistake, and it needs to be repealed. There are some sections of law, like those relating to domestic violence, that should be retained — but the bulk of the law must go."

Biden has previously defended his 1994 crime bill, telling a campaign crowd in New Hampshire in May that "this idea that the crime bill generated mass incarceration – it did not generate mass incarceration." By contrast one of his opponents, Sen. Cory Booker of New Jersey, told HuffPost around the same time that "we should all agree with the force of conviction – that bill was a mistake. Good people signed on to that bill. People make mistakes, but let’s hold them to that. That crime bill was shameful – what it did to black and brown communities like mine [and] low-income communities from Appalachia to rural Iowa. It was a bad bill."

At the same time, Biden walked back parts of the crime bill, including mandatory minimums and the death penalty, in his own criminal justice plan, which was released in July. As my colleague Shira Tarlo wrote last month:

Biden's plan would abolish the federal use of mandatory minimums; eliminate the death penalty; prioritizing prosecuting hate crimes in the Justice Department; and establish a new task force outside the Justice Department that would "make recommendations for tackling discrimination and other problems in our justice system that results from arrest and charging decisions."

. . . The extensive proposal suggests Biden's politics have shifted from the days when he spearheaded a now-controversial 1994 crime bill as a senator. The bill had once been considered one of the former vice president's signature legislative accomplishments, but it has come under scrutiny in recent years from both Republicans and Democrats who argue it led to mass incarceration and unfairly tilted the criminal justice system against people of color.

Biden's proposal, which focuses on extending support to communities of color, proposes creating a $20 billion grant program to "spur states to shift from incarceration to prevention" by focusing on issues like illiteracy and child abuse.

Supporting the decriminalization of truancy, Warren advocates for "positive behavior interventions" over punishments.

"We should decriminalize truancy and instead increase the number of school mental health personnel and provide schools with resources to train teachers and administrators in positive behavioral interventions; trauma-informed alternative discipline practices; and implicit bias to limit suspensions, expulsions and minor-infraction arrests," Warren writes in her new plan.

Harris' presidential campaign courted controversy after a video resurfaced in January, which appears to show the former prosecutor bragging about a truancy crackdown while serving as district attorney in San Francisco.

"I believe a child going without an education is tantamount to a crime. So I decided I was going to start prosecuting parents for truancy," Harris says in the video. After describing how she charged a homeless woman who was working two jobs to take care of her three children, Harris said that "she just needed some help."

"By shining this infrared spotlight of public safety on the fact that her children aren't in school, we were able to figure that out, get her access to services that exist, and through that process, the attendance of her children improved," she continued. "We dismissed the charges against her, and overall, we've improved attendance for this population in San Francisco by 20 percent over the last two years."

Harris has since walked back her strict approach, as Alex Thompson recently reported in Politico:

A Huffington Post investigation earlier this year also found parents in several counties had been arrested, charged and sometimes imprisoned as a result of the reforms Harris supported. In April, Harris told Pod Save America that the prison sentences were “unintended consequences” and said that she wouldn’t support a similar reform as president.

“My regret is that I have now heard stories where, in some jurisdictions DAs have criminalized the parents,” she told the hosts. “And I regret that that has happened and and that the thought that anything that I did could have led to that because that certainly was not the intention.”

Warren's plan also advocates for a more liberal approach to dealing with substance abuse disorders, placing her in contrast with the past positions taken by both Biden and Harris on drug policy.

"For four decades, we’ve subscribed to a 'War on Drugs' theory of crime, which has criminalized addiction, ripped apart families — and largely failed to curb drug use," Warren writes. "This failure has been particularly harmful for communities of color, and we need a new approach. It starts with legalizing marijuana and erasing past convictions and then eliminating the remaining disparity between crack and powder cocaine sentencing. And rather than incarcerating individuals with substance abuse disorders, we should expand options that divert them into programs that provide real treatment."

The 1994 crime bill imposed mandatory minimum sentences for marijuana, while Harris for years did not support legalization of the drug. As Lara Bazelon, the former director of the Loyola Law School Project for the Innocent in Los Angeles, wrote in the New York Times of Harris in January:

She laughed that year when a reporter asked if she would support the legalization of marijuana for recreational use. Ms. Harris finally reversed course in 2018, long after public opinion had shifted on the topic.

In the most recent round of Democratic primary debates, Rep. Tulsi Gabbard, D-Hawaii, confronted Harris about her record as a prosecutor in the Golden State on the issue of marijuana.

"I'm deeply concerned about this record," Gabbard said from the debate stage. "There are too many examples to cite, but she put over 1,500 people in jail for marijuana violations and then laughed about it when she was asked if she ever smoked marijuana. She blocked evidence that would have freed an innocent man from death row until the courts forced her to do so. She kept people in prison beyond their sentences to use them as cheap labor for the state of California."

As moderator Jake Tapper off asked Gabbard to wrap up her comments, the congresswoman claimed that Harris also "fought to keep a bail system in place that impacts poor people in the worst kind of way."

Harris did not directly respond to Gabbard's accusations, instead claiming that she had done the work of "significantly reforming the criminal justice system of a state of 40 million people, which became a national model for the work that needs to be done."