New world disorder: From the rainforest to Hong Kong, the globe is aflame

"Smart lampposts" fall in Hong Kong. Boris Johnson is sure to bungle Brexit — but how? Ho hum, Italy in ruins 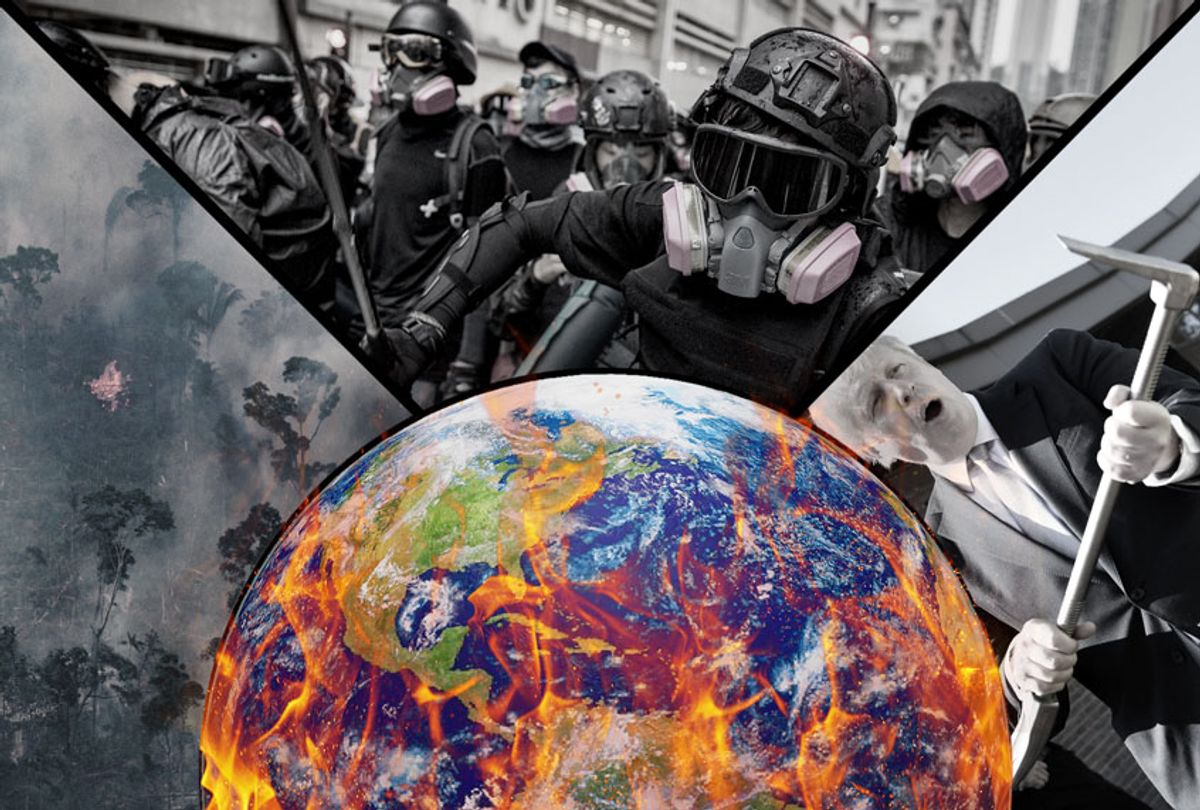 There’s no specific point of connection between the summer-long street protests in Hong Kong, the uncontrolled wildfires in the Amazon rainforest and the slow-motion collapse of the United Kingdom into the bottomless bog of Brexit. What connects them — and many other things besides — is more like a global mood of crisis. We could call it the crisis of democratic legitimacy, and that’s a big part of the puzzle: Virtually all the Western-style democracies that have dominated the global economy since World War II are having their own exciting version of political meltdown.

But there are other crises too, interwoven with that one in a complex pattern. Almost everyone now understands that the global climate is nearing a dangerous, even cataclysmic tipping point; we’re on the brink of an economic recession whose effects will be made much worse by epic levels of inequality; popular or populist revolt is taking various forms in various places, sometimes authoritarian or nationalist and sometimes radical or revolutionary. Brazilian President Jair Bolsonaro, who thinks we should all take fewer dumps and doesn’t want to fight the Amazon fires over his inexplicable personal feud with Emmanuel Macron, epitomizes nearly all these trends in one especially terrible person.

One intriguing aspect of this global narrative is the rapidly changing perception of technology. Protesters in Hong Kong began tearing down that city’s “smart lampposts” this week, claiming they could be used as surveillance devices by authorities. Since the lampposts include cameras and other sensors and are internet-connected, it’s not implausible at all, although police insist they are only used to monitor traffic, weather and air quality. This video is from the Guardian:

Although the Hong Kong protests began in response to an extradition treaty that was seen as violating the former British colony’s autonomous status within China (“one nation, two systems”), after 12 weeks they have generalized into a proxy war between the Chinese Communist Party — which has no official status in Hong Kong — and its pro-reform or pro-democracy opponents. As Andrew Higgins of the New York Times reported this week, supporters of the Beijing government within Hong Kong are working to delegitimize the protest movement and justify an ever-stricter police crackdown:

Parroting slogans scripted by the Communist Party on the mainland, activists in a host of local pro-China organizations have mobilized to discredit the protesters as violent hooligans bent on wrecking the city. It is a message supported by the party’s main proxy in the territory, the Central Liaison Office in Hong Kong, which formally represents the Chinese government.

They mostly ignore the huge peaceful protests and focus instead on the periodic clashes between small bands of protesters and police officers, who this weekend fired rounds of tear gas and used water cannon trucks for the first time against brick-throwing demonstrators.

According to a Business Insider story published Tuesday, there are more material reasons why some prominent Hong Kongers support the Chinese government over the protesters. Real-estate moguls like Li Ka-shing and the brothers Raymond and Thomas Kwok, who are likely the city’s three richest men, have reportedly lost billions in wealth since the protests began; along with the rest of Hong Kong’s fabulously rich business elite, they are eager for a full-scale government crackdown that brings the unrest to an end.

Raymond Kwok, Sun Hung Kai's chairman, was worth $13.1 billion on July 21, according to Bloomberg's Billionaire Index. Now his net worth has dropped to $11.4 billion. Thomas Kwok, another family member, who was recently released from a three-year prison sentence for bribery, has seen his net worth drop over $1.5 billion since July 21, according to Bloomberg's Billionaire Index.

Feel some compassion, people! These are human beings. Li, who owns “ports, a Canadian oil company, and telephone companies, among other businesses, spread across the British Virgin Islands, the Cayman Islands, and Panama,” has personally lost $3 billion since the beginning of July, according to the Financial Times. That would just suck, right?

Hong Kong’s chaos has been understandably confusing for Western observers. Some on both the left and right have tried to depict the protesters as inherently pro-American or “conservative,” since they have sometimes employed the U.S. flag and even Pepe the Frog as symbols — without grasping the latter’s specific resonance in American politics, as this South China Morning Post story makes clear. On the other hand, protesters also sang “Do You Hear the People Sing?” from “Les Misérables” at the Hong Kong airport, sparking a viral video — and whatever that was, it wasn't crypto-allegiance to Donald Trump or the alt-right.

The Chinese government has sporadically claimed that the protests are a American-inspired attempt to destabilize the Beijing regime amid its trade war with Donald Trump, an allegation that fails the smell test on various levels. Ask yourself, for instance, which Trump likes better: a popular uprising, or an authoritarian crackdown?

Rather than trying to tie oneself in Marxian knots interpreting the Hong Kong protests as either reactionary or revolutionary, it might be safer to conclude that they represent an internal crisis that has long been brewing within Chinese society, and is now busting out in the one place where the government can’t send everyone to internment camps or hold mass executions. Is this crisis related to the crisis of democracy in the West? Of course, but it’s far too simplistic to perceive it as Western politics conducted by other means.

Several thousand miles away in the island nation whose empire once included Hong Kong, the tragicomedy of Brexit is nearing its final chapter for what seems like the 11th time. New Prime Minister Boris Johnson was “elected” (by the 150,000 or so registered members of the Conservative Party) on the entirely fanciful promise that he would negotiate a better exit deal from the European Union than the 600-page treaty agreed to by departed PM Theresa May, which was twice resoundingly rejected by Parliament. To be fair, Parliament also rejected every other hypothetical version of Brexit it has considered.

Johnson, who is frequently compared to Trump but is really more like Steve Bannon translated into Upper-Class Twit, could easily become the shortest-tenured PM in modern British history. With the deadline for a potentially catastrophic “no-deal Brexit” barely two months away, Labour Party leader Jeremy Corbyn tried to launch a coup earlier this week, with the goal of uniting the fractured opposition and luring a few Brexit-averse Tories into a no-confidence vote, and then installing himself as caretaker PM until an election can be held. That appeared to fall apart because center-right opposition members trust the left-leaning Corbyn even less than they trust Johnson, and no compromise caretaker was agreeable to all.

Yes, there will be a quiz. But hang on! In trying to kneecap the plotters, Johnson (to almost no one’s surprise) may have sabotaged himself instead. He has now announced he plans to suspend Parliament until the middle of October, giving his foes little or no time to oust him or shut down the Brexit process. As this excellent explainer in the Atlantic puts it, Johnson “has effectively dared his opponents to unite against him in a matter of days — or cede control of the Brexit timetable to him.”

Read that whole story for a fuller picture, but the three likeliest options (all of which would result in further global humiliation for the U.K.) appear to be: 1) Johnson is forced from office by a temporary coalition of opponents; 2) Johnson is forced to hold a fall election, probably right before the Brexit deadline; and 3) Parliament capitulates, either accepting a Johnson Brexit deal (probably identical to the May deal everybody hated) or plunging into no-deal land. From that Atlantic story, here’s how option 1 might work in practice:

Under the Fixed-Term Parliaments Act, which outlines the government’s next steps if a no-confidence-vote motion is passed, the government would grind to a halt for 14 days, during which it would fall on the leader of the opposition — in this case, Labour Party Leader Jeremy Corbyn — to try to form a government.

This wouldn’t be easy. Corbyn would need the support of a host of smaller parties such as the Liberal Democrats, the Scottish National Party, the Green Party, and the Welsh nationalist party Plaid Cymru — all of which, like Labour, oppose Britain leaving the EU without a deal. None of these groups has ruled out establishing a temporary unity government to prevent a no-deal exit by requesting more time to negotiate.

But not all of them are keen on putting Corbyn, who is popular with his party’s base but attracts skepticism among the wider public, in charge. In a letter to the Labour leader this week, Liberal Democrat Leader Jo Swinson warned that putting Corbyn in Downing Street would alienate lawmakers who oppose a no-deal Brexit, and urged him to consider nominating an alternative leader, such as the longtime Conservative lawmaker Ken Clarke or the longtime Labour lawmaker Harriet Harman. Since the Fixed-Term Parliaments Act doesn’t stipulate who should lead a temporary government — only that they be able to command confidence in the House of Commons — this would be possible.

Moving into the EU for other news almost no one understands, Italy’s unclassifiable but dreadful center-right government collapsed last week, but may now be replaced — by itself, more or less. The first part of that is barely news at all: Italy is awfully close to a failed state, and has had 16 governments (give or take) since the collapse of the long-ruling Christian Democratic Party in the early 1990s. The old-time parties of the left, center and right have all disappeared or been rebranded, and even the famously corrupt personality-cult regime of onetime media tycoon Silvio Berlusconi is yesterday’s papers.

Prime Minister Giuseppe Conte’s government, which had been in power just 14 months, represented a wobbly coalition between a brand-new populist reform party, the Five Star Movement, and the anti-immigrant, borderline-racist League party. (Which until recently was known as the Northern League — as in northern Italy, understood to be more “European,” i.e., whiter, than the southern half of the peninsula).

So the League’s Voldemort-style leader, Matteo Salvini, blew up that coalition in hopes of winning a new election and ruling by himself, which looked at first like a solid bet. But now Conte appears on the verge of forging a surprise coalition with the Democratic Party, a mainstream center-left grouping that has inherited bits and pieces of Italy’s largely defunct social-democratic parties (including the remnants of the Italian Communist Party). The BBC reports that the two sides have agreed that Conte can stay on as prime minister if Five Star agrees to roll back “many of the League-sponsored immigration measures that brought about the closure of ports to migrants.” That sounds like an improvement? But here’s a bold prediction: This government won’t last long either.