Republican Party no longer shares advanced data with candidates: The only question is, "Do you support Trump?" 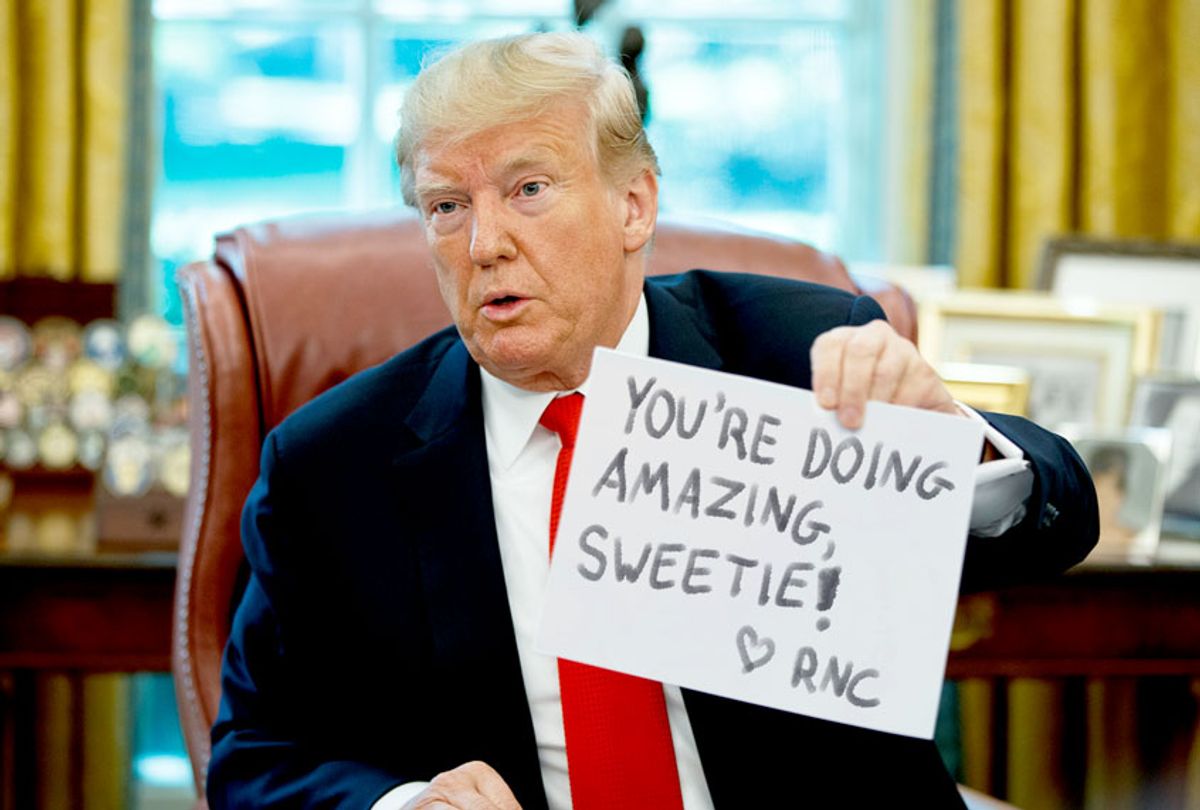 President Trump’s poll numbers are so bad the Republican National Committee is hiding them from local candidates, leaving them in the dark in key must-win races.

In an extensive report on how the party has turned into the cult of Trump, ProPublica reports that critical “voter scores” — sophisticated analytics based on polling that are distributed to party committees and candidates — have disappeared since Trump’s election. The lack of data leaves Republican candidates in the dark about how their districts feel about Trump.

Republican insiders told ProPublica that the numbers are being withheld to “prevent GOP candidates from publicly distancing themselves from the president or leaking unfavorable results that embarrass Trump.”

Former RNC chairman Michael Steele, a longtime Trump critic, told ProPublica that the Republican Party is hurting its own candidates to protect Trump from embarrassment.

“There’s a lot of data they’re sitting on that they’re not sharing,” Steele said, adding that under Trump, “the RNC is not an independent actor; the RNC is now a part of the Trump campaign. The question now isn’t, ‘What do you need?’ The question is, ‘Do you support Donald Trump?’”

Dan Sena, who led the Democratic Congressional Campaign Committee’s victorious House campaign last year, told The Washington Post that withholding voter scores is “malpractice” because it is crucial data that “allows you to look for independents who like the candidate but have mixed feelings about the president.”

Sena said he believes the move is “intentional” because “they clearly don’t want anyone overperforming the president.”

That could pose a difficult election cycle given Trump’s performance. Three new polls — from ABC News/Washington Post, CNN/SSRS and Gallup — show Trump’s approval below 40 percent, lower than it was when Democrats won back the House last year.

Another new poll from Univision and the University of Houston found that Trump trails Biden, Sanders, Warren, Harris and even New Jersey Sen. Cory Booker and former HUD Secretary Julián Castro in deep-red Texas, a state many observers predict could tip blue. A separate Quinnipiac University poll showed that 48 percent of Texas voters say they would “definitely not” vote for Trump in 2020 while just 35 percent said they would “definitely” vote for him.

Trump has not taken the news well. He lashed out at ABC News and the Washington Post, accusing them of publishing a “phony suppression poll” even as he cited a nonexistent survey to claim credit for helping Republican Dan Bishop win Tuesday’s special election in North Carolina's 9th district by 2 percent — a district Trump won by 12 points in 2016. He has even begun to lash out at Fox News, whose polling shows him trailing all four Democratic frontrunners.

While Twitter tantrums may convince the president's die-hard followers that the lamestream media’s numbers are fake news, hiding them from his own party has not calmed the worries of Republican candidates who have to run on the same ticket as the president next year.

Four Republican senators and 13 House members have already announced that they will retire rather than face re-election, including five House members from Texas alone. Trump has claimed that committee term limits are behind the retirements but Roll Call notes that most are unhappy being stuck in the minority, with little apparent chance to win back the House in the near future.

“It’s clear the continued drain of having to defend their toxic, unpopular agenda and the misery of serving in the minority is what’s driving Washington Republicans to head for the exits in record numbers,” said DCCC spokesman Cole Leiter in a statement,