These wins made an otherwise dull 2019 Emmys watchable 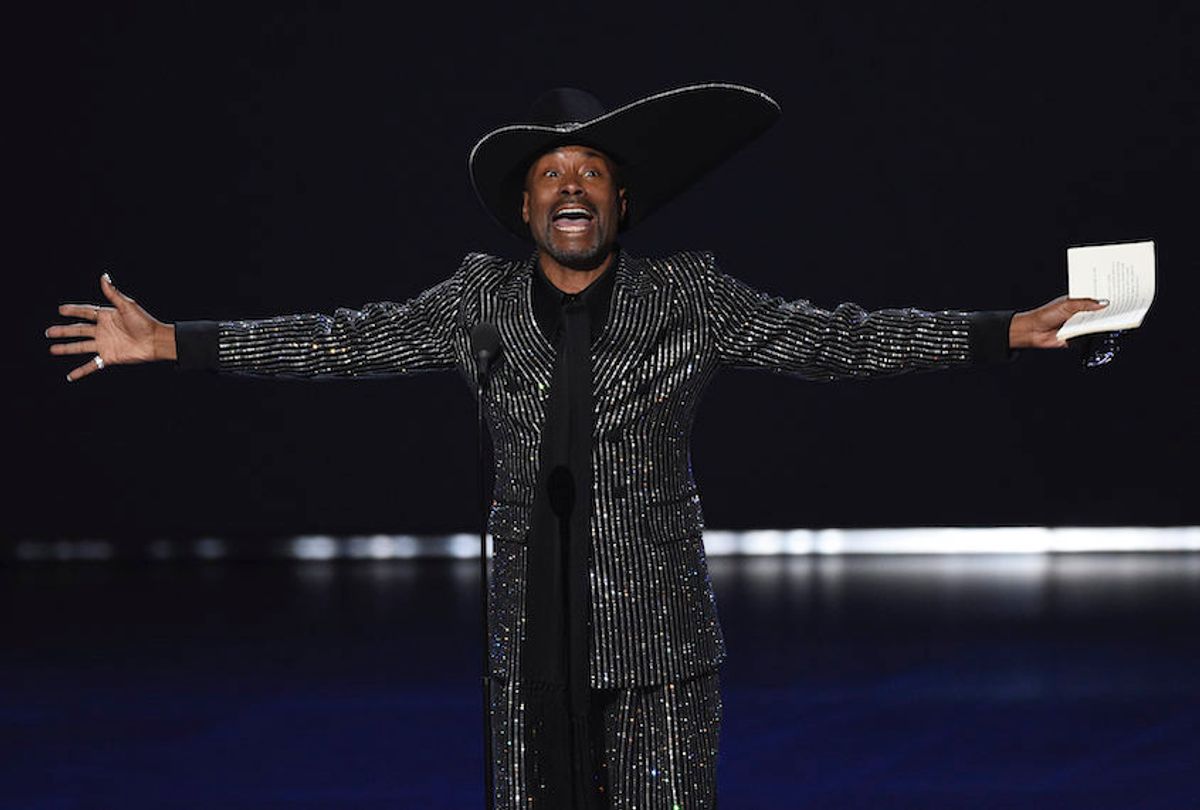 Billy Porter accepts the award for outstanding lead actor in a drama series for "Pose" at the 71st Primetime Emmy Awards. (Chris Pizzello/Invision/AP)
--

Sometimes what makes an Emmys telecast worthwhile isn’t the quantity of the awards won by a series or a performer, but the quality of a win.

Proof of this theory came  more than 80 minutes into a largely moribund 71st Primetime Emmy Awards telecast when Jharrel Jerome’s name was read by presenter Angela Bassett as the winner for Best Actor in a Limited Series. Few actors gave as rich and wrenching of a performance as Jerome produced in Ava DuVernay’s Netflix series “When They See Us.”

But Emmy voters have a history of rewarding names more often than effort, and Jerome shared that category with three Oscar winners — Benicio Del Toro, Sam Rockwell and Mahershala Ali — along with Hugh Grant (“A Very English Scandal”) and Jared Harris (“Chernobyl”). Academy of Television Arts and Sciences voters desiring to play it safe might have chosen  one of these veterans, assuring themselves that the 21-year-old Jerome’s time would come again.

On Sunday, however, they broke from that tradition of safety, making Jerome the first Afro-Latino actor to win Lead Actor in a Limited Series or Movie in Emmy history. Soon afterward Jerome was joined in the books by Billy Porter, whose win in Best Actor in a Drama Series for his work as Pray Tell on “Pose” makes him the first openly gay black man to emerge victorious in that race.

Jerome and Porter would be the sole award winners for their series on Sunday night. Together and separately they illustrate the dual nature of this Emmy telecast, one to be remembered for its array of satisfying victories trapped inside a production that rated somewhere between aggressively middling and “wow, this is bad.”

Or as Emmy commentator Thomas Lennon put it early on, “It’s the Emmys, but it’s also Fox so . . . ehnh!”

The 2019 Emmys was a combination of wonderful choices and rubber stamps, the latter exemplified by the completely expected win for “Game of Thrones” for Best Drama. Peter Dinklage claimed the Emmy for Best Supporting Actor in a Drama, also expected given the fact that he’s won that award before.

But despite the heavy showing for the rest of the cast in other categories, that was the extent of its winnings on Sunday night.

“Killing Eve” star Jodie Comer defeated Emilia Clarke in the race for Best Actress in a Drama, which also means she won over her co-star Sandra Oh. And Porter’s gold in Best Actor shut out Kit Harington who, if we’re being honest, should be content to have been nominated at all.

Even so, it boggles the mind to realize that “Game of Thrones” won the same number of major category Emmys as Netflix's “Ozark."  Jason Bateman took home an Emmy for directing, while Julia Garner earned the Best Supporting Actress prize.

Other wins were more predictable: “Last Week Tonight with John Oliver” scored in the writing for a Variety Series and Outstanding Variety Talk Series categories. “Saturday Night Live” added to its mountain of Emmys with its wins for Variety Sketch and directing.

The most interesting race, however, was the Lead Actress in a Comedy category that pit seven-time nominee Julia Louis-Dreyfus of "Veep" against “Russian Doll” star Natasha Lyonne, “Fleabag” creator and star Phoebe Waller-Bridge, Christina Applegate of “Dead to Me,” Catherine O’Hara of “Schitt’s Creek,” and last year’s winner in the category, Rachel Brosnahan, the star of “The Marvelous Mrs. Maisel.”

Amazon’s “Mrs. Maisel” entered the race with 20 nominations, which put the wind in its sails. But it was another Amazon star, Waller-Bridge, who sauntered off with wins in Best Comedy Writing, Best Comedy Actress and the top award, Best Comedy, for her show. “Fleabag” also snagged a directing Emmy for Harry Bradbeer, who helmed Episode 1.

In case there were any doubts as to Waller-Bridge’s fitness as a winner, she opened her Comedy Writing acceptance speech with, “I find writing really hard and really painful, but,” she paused, then said in a low voice while grinning slyly, “it’s really all about . . . this!”

And when she won again for Lead Actress in a comedy, Waller-Bridge said gleefully, “I find acting really hard and really painful, but it’s really all about . . . this!”

A brilliant moment, one of several. If only the Emmys production itself were rendered half as cleverly.

In the winnings tally, Amazon fared the best on Sunday night, but overall when including last week’s Creative Arts Emmy wins, HBO was the top earner with 34 statues followed by Netflix with 27, and Amazon walking away with 15.

“Game of Thrones” won 12 Emmys, tying its best showings in 2015 and 2016 but failing to set new records. “Chernobyl” earned 10. Impressively, Amazon’s comedies provided nearly all of its wins, with “Fleabag” gaining six Emmys while “The Marvelous Mrs. Maisel” netted eight.

Following the route of the 2019 Oscars, Fox’s telecast of the 71st Primetime Emmys opted to go host-free — sort of. An opening bit featured Anthony Anderson frantically running around backstage in search of somebody to open the telecast before tossing Bryan Cranston onstage, easily the smartest choice producers could have made.

Less wise was their selection of Lennon in the commentator role, or — as the improvisational comedy star described himself — the audience’s “sherpa around the lulls.” Or is it “lulz”? God only knows. Either way, it would have been better for all of us to wander without him.

Lennon’s task was to contribute pithy off-the-cuff commentary as the winners were making their way to the stage, but it was mostly nonsensical and, at times, stepped on the emotional energy of some wonderful moments requiring zero narration.

That said, he did get in a decent burn early on before the show cut to commercial with this oblique reference to Felicity Huffman: “The producers have asked me to give a special shout-out to any of our previous lead actress winners who are watching tonight from prison. Hopefully those two weeks are going to fly right by. Keep your chin up!”

Similarly uninspiring were the extended gags allotted to a few presenters, an overly-long bit involving Ken Jeong employing footage of the audience in a TikTok meme while co-presenter Nick Cannon just stood there. Why? Because “The Masked Singer” debuts this week, "so . . . ehnh!”

Ill-conceived as these moves were, the musical selections accompanying the winners on their way the podium ranged from the confusing (what does “Tutti Frutti” have to with “Last Week Tonight”?) to the tasteless.

That choice was the height of wrong — and that’s just on the face of it. Pull back a bit to realize that “Chernobyl” beat “When They See Us” in that category and the song choice feels even more slapdash, as if the producers banked on one outcome and ran with the music anyway when the HBO drama won.

Remove the poor production choices from the 71st Primetime Emmys telecast, however, and what’s left is a mostly satisfying evening. Not everyone will feel completely at peace with the evening’s outcome; no one ever does. But if you came in rooting for “Veep,” “This Is Us,” “Escape at Dannemora,” “Russian Doll,” “Sharp Objects” or “Better Call Saul,” you may have come away from Sunday’s broadcast unhappy.

Perhaps not as miffed, however, as “Deadwood” fans, who witnessed the excellent “Deadwood: The Movie” lose out to the “Black Mirror” choose-your-own-adventure episode “Bandersnatch.”

And as ticked off as people are to notice which show business luminaries who died were left out of the regular “In Memoriam” segment, Fox tempted fate and lost by including a version for series that ended — including “Gotham” alongside the likes of “Jane the Virgin” and “The Big Bang Theory,” but leaving out “My Crazy Ex-Girlfriend” and “Orange Is the New Black,” among others.

At the same time, Sunday’s Emmys provided a hopeful view into television’s future. Jerome’s and Porter’s wins are acknowledgments of a diversifying body of nominees and stories in the TV marketplace, even though the parades of mostly white writing staffs and producer teams revealed how far the industry has yet to go.

The win for Waller-Bridge, the continued success of “Barry” (whose superior second season netted a Best Comedy actor Emmy for Bill Hader) and its nominations, along with “Russian Doll” and “The Good Place,” are all signs of Emmy’s changing view of what a Best Comedy winner can look like.

Other expected wins felt fine. The smart money was on Michelle Williams to walk away with the Emmy for Lead Actress in a Limited Series or Movie, and she did. The "Fosse/Verdon" star's main competition in the category, Patricia Arquette, won for her Supporting Actress work in Hulu’s “The Act” as opposed to “Dannemora,” for which she also was nominated.

“Mrs. Maisel” wasn’t completely shut out, but like the evening’s other main favorite, “Game of Thrones,” Dan Palladino and Amy Sherman-Palladino’s work racked up less gold than expected. Alex Borstein and Tony Shalhoub came out on top in the Supporting Actress and Actor in a Comedy categories. (Borstein’s win was particularly funny thanks the cameraperson cutting to her as her name was announced, just in time to glimpse her taking a shot from mini-bottle of liquor courtesy of her “Family Guy” boss Seth MacFarlane.)

The “Game of Thrones” defeats felt just in some cases. “Succession” writer Jesse Armstrong’s win over D.B. Weiss and David Benioff in the drama writing category is a clean, solid win. Others, however, felt like a matter of bad math. The multiple “Thrones” nominees in the Best Supporting Actress category — Gwendoline Christie, Lena Headey, Sophie Turner and Maisie Williams — split the vote, leading to an "Ozark" win for Garner. (Which is surprising in itself, given that the other non-Westerosi nominee was “Killing Eve” co-star Fiona Shaw.)

A similar occurrence may have happened in the limited series supporting actor category, which included three of the stars from “When They See Us” alongside “Dannemora” star Paul Dano and “Chernobyl” actor Stellan Skarsgård. In the end, Ben Whishaw of “A Very English Scandal” emerged as the winner.

He was talking about all the shows beside this Emmys telecast, and fortunately a few of those finest made a substandard awards show worth watching until the end.