2019 Emmys: One last great battle for "Game of Thrones"

HBO's epic is poised to break several awards records. Will dragonfire and blood win out? 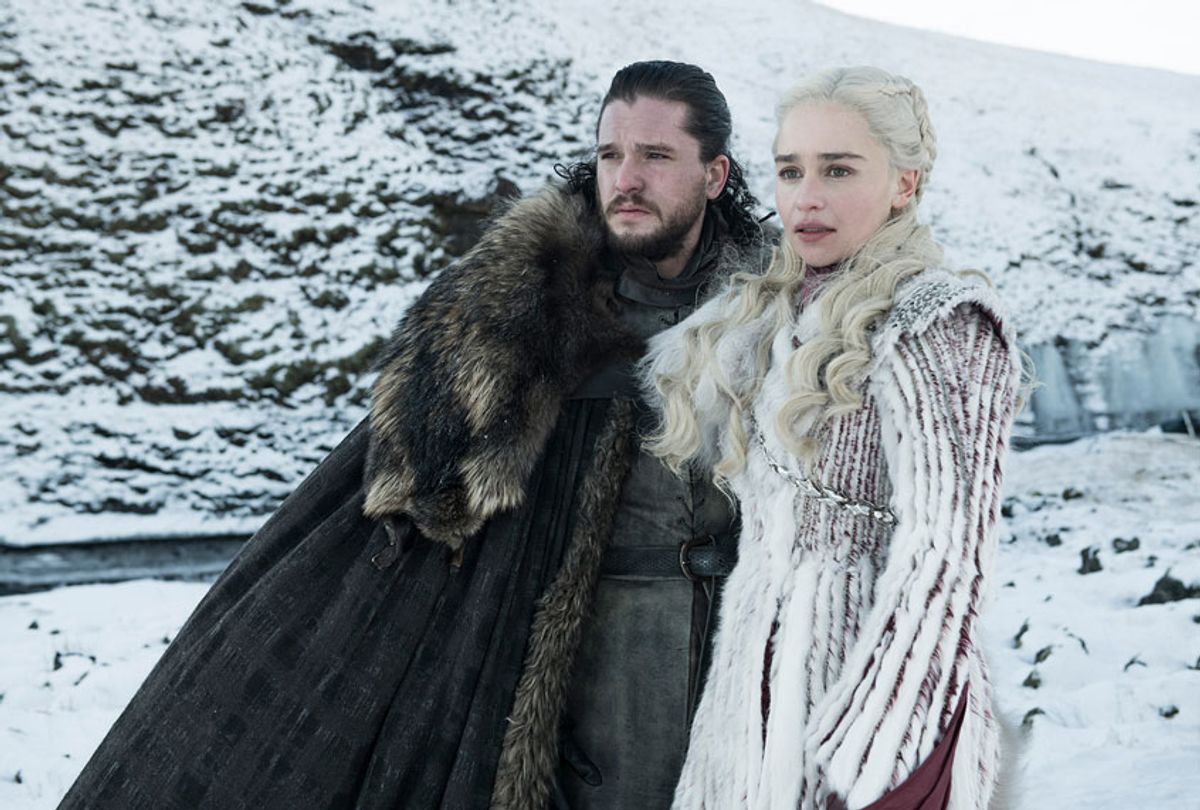 More than four months have passed since “Game of Thrones” ended forever. That’s more than enough time for the high to completely wear off, and for a good number of viewers who found the finale disappointing, it certainly has. Not for Emmy voters, though.

Tonight, when the 71st Primetime Emmy Awards airs on Fox, American viewers may once again be reminded of the Iron Throne’s dominance over all else.

"Thrones" already holds the status of being the most-nominated drama of all time and one of the most honored television series in general. This year alone it racked up 32 nominations, setting a new record for comedies and dramas. Included in total are seven nominations among the acting categories. (A complete list of this year's nominations here.)

And that gives the series a lot of potential to thrill its diehard devotees one last time. Either that, or it may leave a whole lot of people ticked off at the injustice of a series that ended with a substandard final season scorching the chances for other shows whose seasons truly fired on all cylinders.

Now, despite these acrid notes, we come not to bury “Game of Thrones” nor praise it too much, but simply to temper expectations for how Sunday’s Emmy’s telecast is destined to shape up. The finale season of HBO’s international megahit already scored 10 wins at last weekend’s Creative Arts Emmy awards ceremony in technical categories, as well as for costumes, makeup and music.

Regardless of how one feels about the eighth season’s writing, the artistry that went into the show has few peers on television.

It’s the major category competition that holds the potential to leave a few folks perplexed or irritated at the outcome. At the same time, Emmy voters love showering repeat victors with amounts of gold that would leave a Lannister agog. They also love breaking records in doing so, which this year is simple enough to do: the show only needs three more wins to break its own record for single wins in a year — 13, as opposed to the 12 it netted in 2015 and 2016.

Sunday night isn’t entirely about HBO’s fantasy blockbuster, mind you. Amazon’s acclaimed comedy “The Marvelous Mrs. Maisel” is the one to beat on the lighter side, coming in 20 nominations strong.  HBO's limited series “Chernobyl” follows with 19, two more that the nomination total for its channel sibling “Barry,” which enjoyed an outstanding second season and earned 17 nominations.

That's one shy of the nominations racked up by NBC’s “Saturday Night Live” (18) and matched by the total number of nods for FX’s limited series “Fosse/Verdon.” And that series’ star Michelle Williams would be the favorite in the lead actress in a limited series or movie category, if not for the ferocious competition offered by Patricia Arquette for her work in “Escape at Dannemora” and Amy Adams’ raw and vulnerable turn in “Sharp Objects.”

And let us not forget and hope that Emmy voters didn’t forget the visceral passion and unparalleled emotional triumph of Ava DuVernay’s “When They See Us,” her limited series for Netflix that landed 16 nominations, announcing it as a contender to watch in this year’s Emmy race.

It’s been a year of high quality television overall, with a surfeit of excellence in comedy, limited series and yes, drama. “Game of Thrones” is likely to win the top drama category, even if most of its competition displayed more uniformly even levels of excellence  — “Pose,” “Succession,” “Better Call Saul” and “This Is Us,” certainly, “Killing Eve” and “Bodyguard” sometimes and mostly. (As for “Ozark,” I still can’t answer why that’s up there.)

And if “Game of Thrones” wins Best Drama, that will place it the same club as “Mad Men, “Hill Street Blues,” “The West Wing” and “L.A. Law.”

Comedy is an even tighter contest, with “Maisel” squaring off against the daring and wonderful “Fleabag” — which ends with this second season, making this the program’s last shot at Emmy hardware — and “Barry,” whose sophomore round is one of the finest batches of episodes to air in 2019. Then again, the competition also happens to be awesome: “The Good Place”? Give it all the awards. “Russian Doll” deserves mighty amounts of love too.  So do “Schitt’s Creek” and “Veep.”

In fact the only element keeping this from being an entirely valid and fair contest is Emmy’s failure to nominate “Better Things,” without a doubt one of the best shows on TV — comedy or drama — and certainly deserving of a nod.

That said, at least “Modern Family” wasn’t shoved in there for old times sake. (That series snagged five best comedy Emmys, which is likely all it's going to get, and still makes it one of the winningest series in the award’s history.)

The show races probably don’t hold as many nail-biting match-ups as the individual performance competitions, however — and in these categories, HBO's epic fantasy is largely at a disadvantage. Having said that, Emmy is a sucker for head-scratching upsets. Although Sandra Oh could become the first Asian woman to win Best Actress in a Drama for “Killing Eve,” voters may give it to Emilia Clarke for the laughs. Or heck, why not Robin Wright for “House of Cards”? Talk about a twist.

Lead actor in a drama has the potential to set hearts aflame by rightfully rewarding Billy Porter for slaying it week after week on “Pose” … or it could shock and dismay us all by handing some metal to Kit Harington.

The Outstanding Supporting Actress in a Drama category is heavy with “Thrones” contenders, with Gwendoline Christie, Lena Headey, Sophie Turner and Maisie Williams all vying for a statue. And this bodes well for “Killing Eve” actress Fiona Shaw, who may benefit from an impressive split in the votes.

A similar scenario exists in the Supporting Actor in a Drama race, pitting Alfie Allen, Nikolaj Coster-Waldau and Peter Dinklage against one another (although Dinklage, an eight-time nominee, likely has better odds). But then, Jonathan Banks is up against his “Better Call Saul” co-star Giancarlo Esposito; these splits could better the chance of a win for “House of Cards” star Michael Kelly or Chris Sullivan for “This Is Us.”

Again, despite the dragon fire, it’s the individual comedy performance competition that’s the most exciting, with “The Good Place” star Ted Danson up against last year’s winner Bill Hader of “Barry,” and possibly having to worry about Eugene Levy of “Schitt’s Creek,” with “Black-ish” lead Anthony Anderson, “Black Monday” star Don Cheadle and “The Kominsky Method”’s Michael Douglas rounding out the roster.

Even that doesn’t hold a candle to the tremendous showdown in the Comedy Actress category. Rachel Brosnahan (“Mrs. Maisel”), Christina Applegate (“Dead to Me”), Natasha Lyonne (“Russian Doll”),  Julia Louis-Dreyfus (“Veep”), Catherine O’Hara, (“Schitt’s Creek”) and Phoebe Waller-Bridge (“Fleabag”) are all killer contenders. Any of them is a fine choice as a winner, and it’s very upsetting to know that a win forces the rest of these very deserving actors to go home empty handed.

The Comedy Actress race also holds the potential to make history. This marks the seventh time Louis-Dreyfus is nominated for “Veep,” and a win would bring her career Emmy total to nine, setting a new record.

At least that would be a more satisfying possible outcome than the Should Win/Going to Win Lead Actor in a Limited Series or Movie mix that favors Jared Harris for “Chernobyl” or Mahershala Ali for “True Detective,” or any of the name brand movie stars occupying this category (Benicio Del Toro for “Escape at Dannemora,” Hugh Grant for “A Very English Scandal,” Sam Rockwell for “Fosse/Verdon”), when the Emmy truly belongs to Jharrel Jerome, whose performance in “When They See Us”  exemplifies the phrase tour de force.

With any justice the result of one of these races will top the conversations on Monday morning, proving  the power of down-to-Earth dramatic grit and talent over the effects-assisted spectacle of dragonfire and blood. But even if the 71st Primetime Emmys unfurls as expected, with Westeros conquering all, at least we won’t have to worry about being tortured by repeats.