“Zombieland: Double Tap” is the weirdly endearing sequel no one asked for

Director Ruben Fleischer serves up a second helping of giddiness, gore, and of course, brainsss 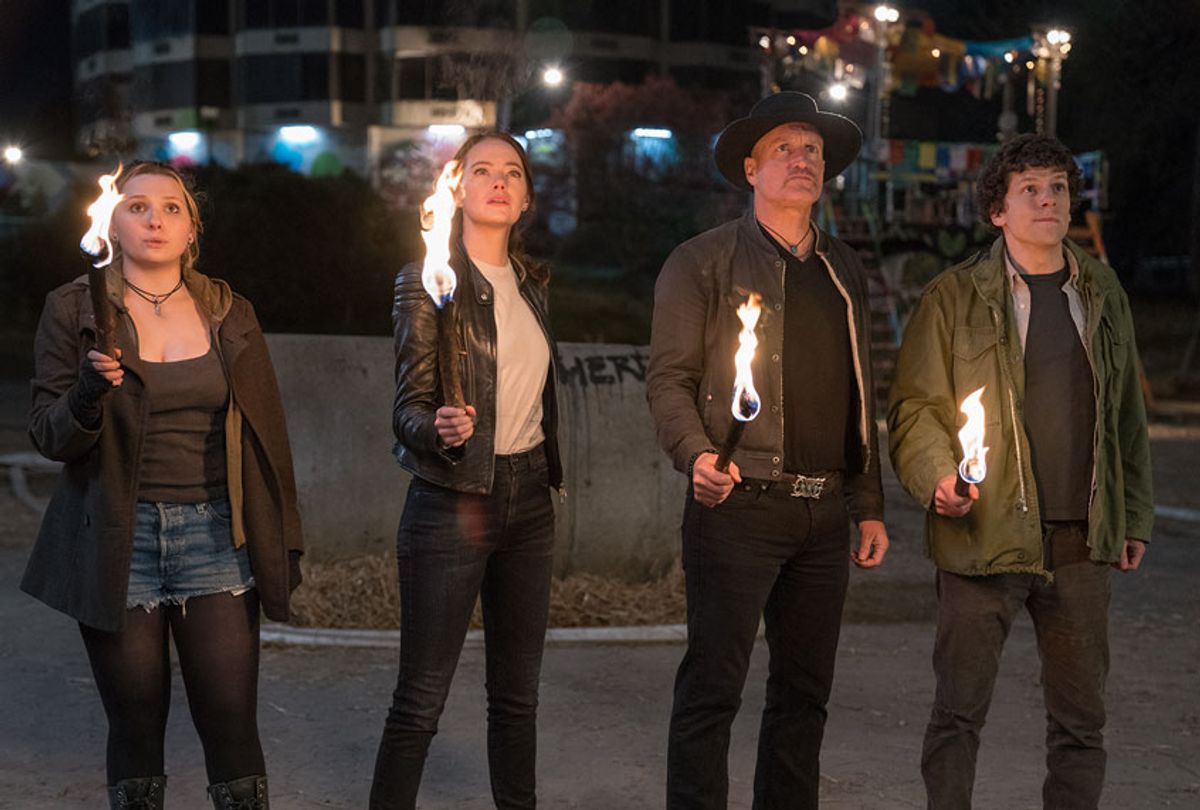 "Zombieland: Double Tap" is one of those sequels that feels like a logical extension of its predecessor. If you liked the original movie, you'll enjoy this one. If you didn't, you won't.

Picking up 10 years after the events of "Zombieland," the new film begins as Columbus (Jesse Eisenberg), Tallahassee (Woody Harrelson), Wichita (Emma Stone) and Little Rock (Abigail Breslin) move into the abandoned White House in the post-apocalyptic zombie-filled world that Columbus has long referred to as Zombieland. Things seem to be settling down for them until Columbus scares Wichita with a marriage proposal that prompts her to scoop up her sister Little Rock and abandon both Columbus and Tallahassee. After several weeks pass, Columbus has seemingly moved on with a cute new girl named Madison (Zoey Deutch), but both he and Tallahassee are drawn back into the world of adventure when Wichita returns and informs them that Little Rock has run off with a new hippie boyfriend named Berkeley (Avan Jogia) and needs to be rescued.

Like the first "Zombieland" movie, the appeal of this one is squarely centered on three things: Lots of gory and well-choreographed zombie fight scenes, intelligent dialogue, and those idiosyncratic meta moments when Columbus participates in world-building to his audience by explaining the "rules" of surviving Zombieland or (as a new twist in this installment) identifies the different types of zombies that one might encounter. The film benefits from the fact that the performers seem to be having a great time, as they did in the first go-round. While it's impossible to say for sure that they were having a blast on set — for all I know, they secretly hated each other and were passive-aggressive the whole time — this film gives off a cheeky, borderline giddy vibe that makes it as weirdly endearing as the previous one. The material is strong on its own, to be sure, but it's elevated by the fact that Harrelson, Stone, Eisenberg, and Breslin all seem to be having a blast. Equal gusto is invested into the performances by the new characters played by Deutch and Jogia, as well as a possible love interest for Tallahassee named Nevada (Rosario Dawson) and two characters who seem like doppelgängers for Columbus and Tallahassee (Albuquerque and Flagstaff played by Luke Wilson and Thomas Middleditch, respectively).

Special credit should be paid to director Ruben Fleischer, whom I gradually realized while watching this is becoming one of my favorite working directors and may be one of the most underrated directors of action films and comedies working in Hollywood today. He has only directed four films before this one, but each was a winner even if the critical consensus didn't reflect that fact. The original "Zombieland" (2009) was, like this one, a quirky and clever comedy that built a convincing fictional world without seeming pretentious or heavy-handed. "30 Minutes or Less" (2011) was a smart and dark slacker comedy that one could have imagined coming from Kevin Smith in his earlier days if he had had a decent-sized budget. "Gangster Squad" (2013) was a stylish and fun historical crime film that moved at a brisk pace. Finally there was "Venom" (2018), which as I noted in my review at the time felt more like a body horror movie about an antihero than a traditional superhero flick, and was anchored by a fantastically off-the-wall performance by Tom Hardy. (His scene chomping down on live lobsters at a fancy restaurant, which I could have sworn I praised in my original review, remains one of the funniest moments in blockbuster cinema from the 2010s).

What I think works about Ruben Fleischer movies is that they take place in well-established genres and aim to be smart but never become portentous. We live at a time when blockbuster films try more and more often to become major events — because they want to build their own cinematic universes (2017's "The Mummy"), envision themselves as being more profound than they actually are (2019's "Joker") or both (2016's "Batman v. Superman: Dawn of Justice") - whereas Fleischer's films prioritize being entertaining first and foremost. This doesn't mean that he fails to bring out memorable performances from his actors or include dialogue and plotting that is a few notches brainier than most of what you see in blockbuster Hollywood fare (he does both of these things), but the movies seem to exist for the sake of putting on a good show rather than achieving some larger self-aggrandized mission. As a result, they're always a refreshing change of pace from the norm of blockbuster fare this decade.

Which brings us back to "Zombieland: Double Tap." It's rare for a sequel released so long after the film immediately before it to feel like such a seamless follow up, and I must confess that when I first saw that it was coming out, my reaction that was a "Zombieland" sequel felt unnecessary at best. Yet I'm glad that this movie exists and hope that it does well at the box office. It isn't easy for a horror comedy to deliver what fans of its particular sub-genre (in this case zombie movies) expect while simultaneously including more jokes that lands than those that don't. Yet "Zombieland: Double Tap" pulls off this dual feat with as much seeming effortlessness as the first "Zombieland." I didn't realize that I'd missed the characters of Columbus, Tallahassee, Wichita, and Little Rock after a decade-long absence, but as soon as they reappeared on screen I suddenly realized why this movie wasn't unnecessary at all. Fortunately for fans of the first one, Fleischer and company knew what they were doing when they brought us back to their crazy, blood-splattered world.