Kellyanne Conway suggests that Rep. Rashida Tlaib is not a good mother on "Fox & Friends"

"Really classy," Conway said of Tlaib during her appearance on Fox News. "Mom of the year, in fact" 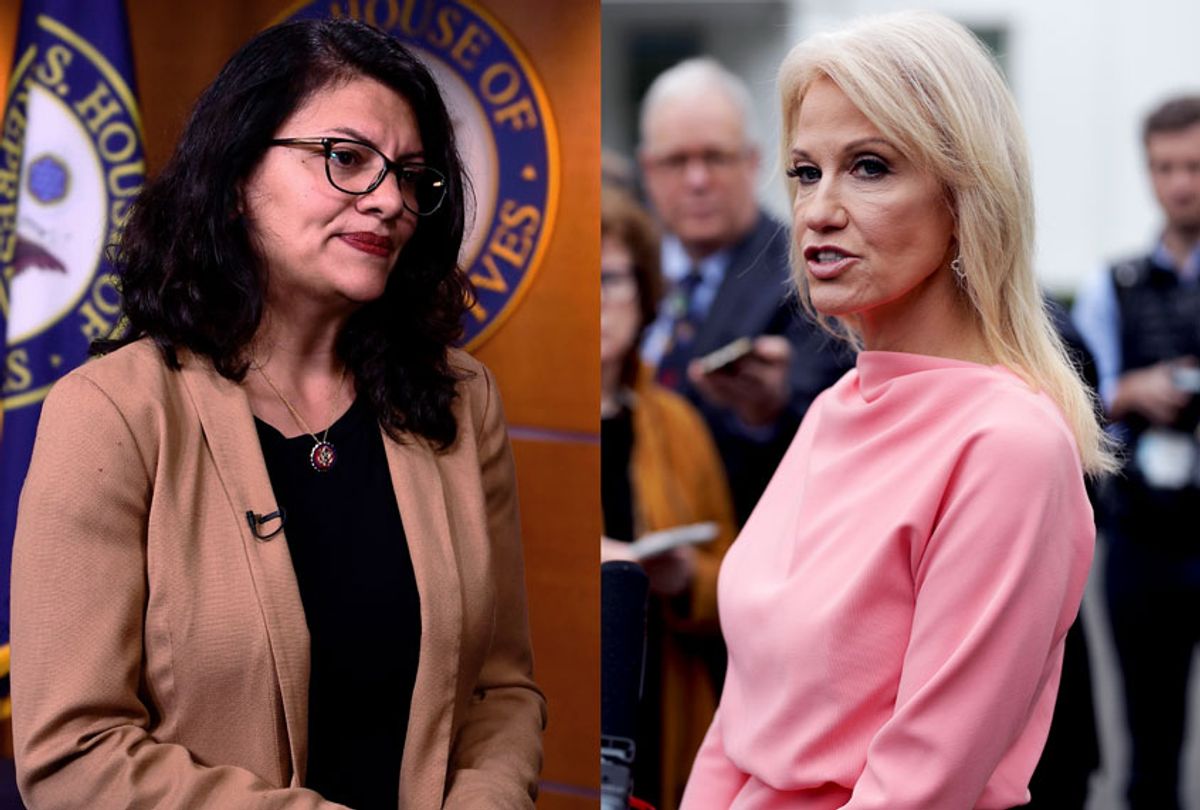 Kellyanne Conway, the counselor to President Donald Trump, suggested that Democratic Rep. Rashida Tlaib of Michigan was not a good mother during a Thursday appearance on “Fox & Friends.”

After discussing the 31 Democratic legislators who serve in districts who voted for the Trump-Pence ticket in 2016, Conway criticized “those Democrats who ran on ‘I’m going to get there, and I’m going to impeach the president.’"

"You know who said that? Foul-mouthed what’s-her-name," Conway told the co-hosts of the president's favorite morning show before beginning to impersonate Tlaib. "'I told my five-year-old son we’re going to impeach the MF-er.’ Really classy. Mom of the year, in fact.”

Tlaib, who said that the Democrat-controlled House of Representatives would “impeach the motherf*cker” during a speech at a MoveOn event in January, has previously talked about how much she values her children. In June, she admitted that she worries whether she will return home to see her two sons after work amid death threats.

The remarks, which occurred during a House Oversight Committee hearing on domestic terrorism and white supremacy, were directed at Michael McGarrity, the FBI's assistant director of the counterterrorism division. Tlaib asked McGarrity why the death threats against her were not viewed as domestic terrorism.

"How is that not enough to fall under domestic terrorism? If they're targeting solely based on my faith and others in saying that a 'good Muslim is a dead one?' Obviously directed to me?" Tlaib asked.

She later added, "We get so many of them. And I keep asking, 'What happens? What happens to these individuals?' . . . I'm being sincere.  I'm not trying to — I'm really sincere. I'm a mother, so I want to go home to my two boys."

Conway also used her time on “Fox & Friends” to defend Trump from the impeachment inquiry against him. The president is being investigated because of allegations that he tried to pressure Ukraine to investigate his political rivals while withholding military aid appropriated by Congress.  Ukraine has received “far more aid than it ever had under President Obama,” as well as more aid from the U.S. than from any other country, Conway claimed.

“This is relevant, because I think that this entire inquiry is just a continuation of the Russian investigation that went nowhere and the Mueller report and then the sequel — Mueller, himself, who was stumbling and bumbling through his testimony,” Conway said. “He was the original star witness of the summer that was supposed to undo the president.”

“I think it shows how desperate the Democrats are to figure out a way to get President Trump,” Conway said. “They can’t get him at the ballot box, they’re trying to undo a democratically-elected president from three years ago. They’re trying to interfere — yes I said it, interfere — in the next election.”