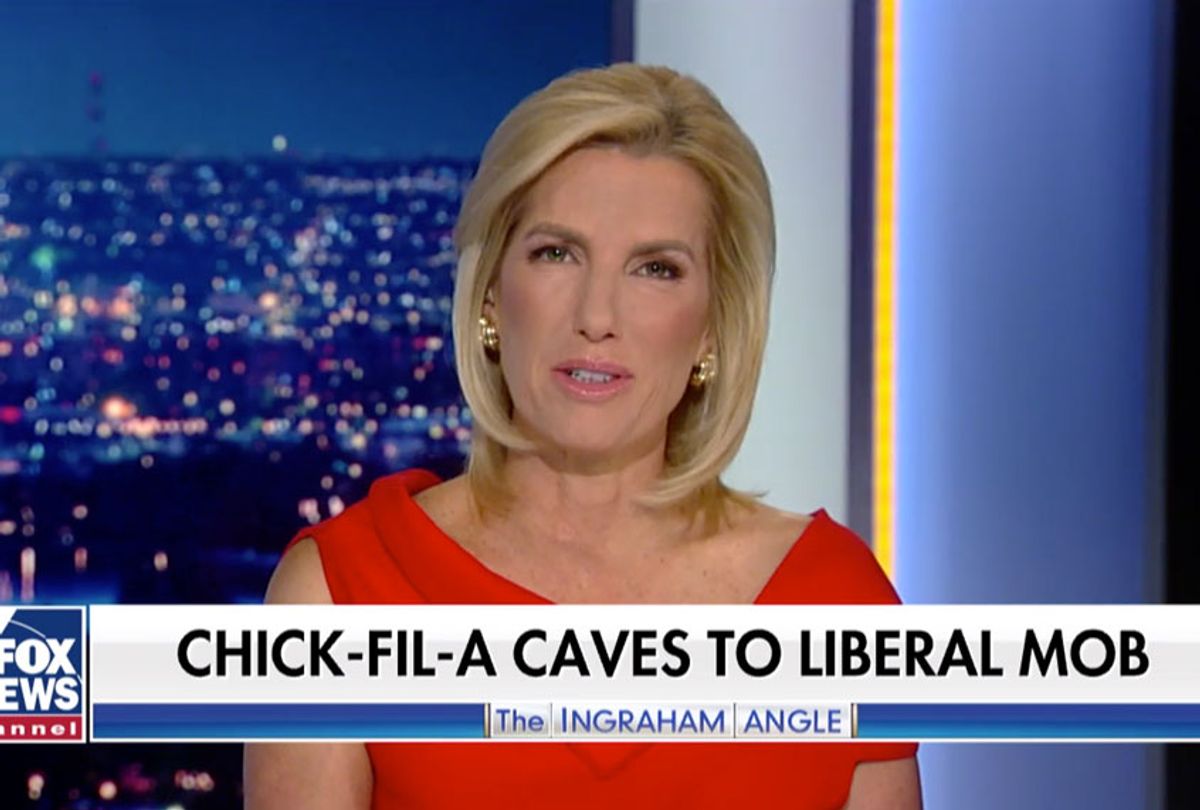 Conservative commentator Chadwick Moore referred to LGBTQ activists who pushed back against Chick-fil-A as “bullies” Tuesday on Fox News as the fast-food chain shakes up its charitable giving.

Instead of lauding Chick-fil-A for appearing to wind down its well-documented history of donating to causes with hostile positions to members of the LGBTQ community, Moore and Fox News host Laura Ingraham only expressed outrage the fast food chain had stopped doing as they lamented “cancel culture.”

The segment in question on “The Ingraham Angle” opened with the Fox News host saying, “After years of resisting the intolerance of the radical left, Chick-fil-A decided to relent, hoping that those activists would just leave them alone. Well, the chicken chain won’t donate now to the Salvation Army and the Fellowship of Christian Athletes, because leftists defame those groups as anti-LGBTQ, which those groups deny.”

After showing clips of Americans saying that they were happy Chick-fil-A would no longer donate to such causes, Ingraham added: “Now they’re going to find that the leftists want more. Now they’re wanting them to ditch the group Focus on the Family. So if you give them an inch, they take a mile.”

Moore told Ingraham that “we are living in an era of absolute moral panic” and argued that a previous unwillingness to bow down to the alleged “bullies” on the left was one of the reasons the chicken chain had amassed brand loyalty.

“There’s nothing hateful about this company. There is nothing anti-LGBT about the groups they were donating to,” Moore said. He then speculated a next step could be “Antifa beating up Salvation Army bell ringers.”

Despite Ingraham’s segment,there is no direct evidence that Chick-fil-A’s decision to stop giving to the Salvation Army and Fellowship of Christian Athletes was a result of those organizations’ alleged anti-LGBTQ agenda, according to Snopes. The fast food chain reportedly decided to limit its 2020 charitable donations to Junior Achievement USA, a K-12 educational non-profit; Covenant House International, which addresses youth homelessness; and food banks in locations where Chick-fil-A opens new restaurants.

In addition to Salvation Army and Fellowship of Christian Athletes, more than 80 other groups — many of which are not connected to LGBTQ issues — will reportedly not receive donations in 2020 which had been allotted to them in previous years by Chick-fil-A.

In addition, the Chick-fil-A Foundation’s announcement this month never mentioned LGBTQ issues and did not say that specific charities had been excluded from funding because of their stance on LGBTQ issues. A reporter from Snopes also said the company told him it would not rule out giving to those charities in the future. The Guardian also found reported that the chicken chain had not specified whether protests from the LGBTQ community motivated its decision; it is focusing on charities that deal with homelessness, education and hunger.

In terms of the chain’s relationship with Focus on the Family, which Ingraham also invoked on her show, GLAAD’s director of campaigns and rapid response Drew Anderson released a statement on Monday saying, “If Chick-Fil-A is serious about their pledge to stop holding hands with divisive anti-LGBTQ activists, then further transparency is needed regarding their deep ties to organizations like Focus on the Family, which exist purely to harm LGBTQ people and families.” Focus on the Family is a Christian conservative organization that has lobbied against LGBTQ rights, including marriage equality, LGBTQ adoption and LGBTQ parenting.

Chick-fil-A has in the past attracted criticism because of its support for virulently anti-LGBTQ groups. According to Vox, these have included “a $1.1 million gift to the Marriage & Family Foundation, a group that promoted so-called traditional marriage and opposed both gay marriage and divorce” and “$1,000 to Exodus International, a group that promotes anti-gay conversion therapy.” The chain has also found a big booster in Fox News, where prominent network personalities have eaten their food on the air while promoting the restaurant’s agenda amid various controversies.