Swalwell: Nunes "may be the fact witness if he’s working with indicted individuals around our investigation.” 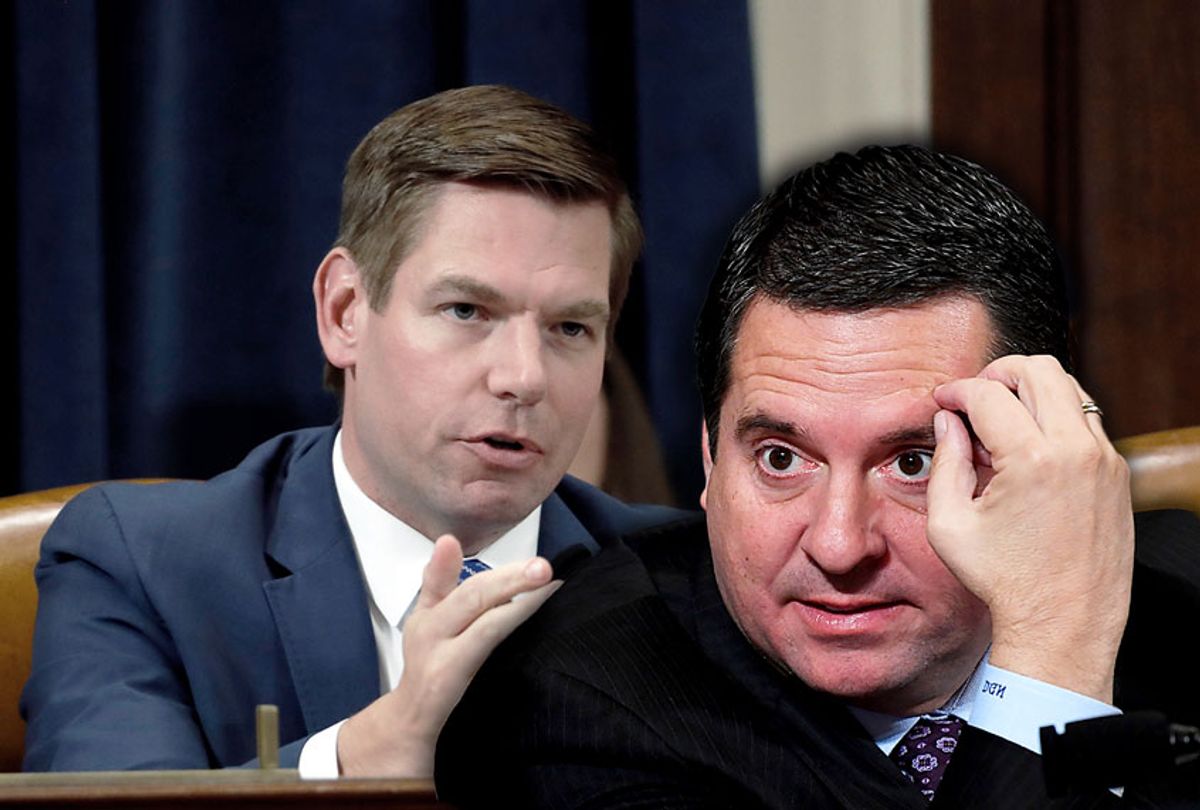 Rep. Eric Swalwell, D-Calif, called out Rep. Devin Nunes, R-Calif., on Thursday over his links to an indicted associate of Trump attorney Rudy Giuliani who assisted with the effort to pressure Ukraine into launching investigations to help President Donald Trump’s re-election campaign.

His comments came after Fiona Hill, the former top Russia expert on the National Security Council, hit out at Republicans on the committee who have pushed a conspiracy theory welcomed by Trump that Ukraine framed Russia in the 2016 election meddling case, which she said “clearly advance[d] Russian interests.”

“Dr. Hill, you cautioned us on the dangers of members of this committee perhaps peddling any Ukrainian conspiracy theories that could benefit Russia,” Swalwell said. “I want to ask you if you’ve heard the name Lev Parnas, of Ukraine, someone in this investigation who was influencing President Trump and Rudy Giuliani about some of the debunked conspiracy theories you referenced,” he added, referring to a baseless George Soros-linked conspiracy theory that led to the ouster of former Ukraine Ambassador Marie Yovanovitch.

After Hill acknowledged that she had, Swalwell asked if she was aware that Parnas was indicted “for making foreign contributions to Republicans in U.S. elections.”

“I am aware of those reports, yes,” Hill replied.

“Are you aware of yesterday’s Daily Beast story reporting the indicted Ukrainian Lev Parnas has been working with ranking member Devin Nunes on Mr. Nunes’ overseas investigations?” Swalwell asked, before entering the report into the official record.

Swalwell quoted from the piece, which said that Parnas “helped arrange meetings and calls in Europe for Rep. Devin Nunes in 2018… Nunes aide Derek Harvey participated in the meetings… which were arranged to help Nunes’ investigative work.”

Swalwell then addressed Committee Chairman Adam Schiff, D-Calif., noting that Schiff had been “falsely accused throughout these proceedings by the ranking member as being a ‘fact witness.’”

“Now, if this story is correct, the ranking member may have actually been projecting,” Swalwell said. “And, in fact, he may be the fact witness if he’s working with indicted individuals around our investigation.”

The timeline in the Daily Beast report dovetailed with Nunes’ parallel investigation to the official House Russia probe, seeking to undermine the “origins” of the Mueller investigation.

Parnas’ attorneys told The Daily Beast in response to the report that his client is “prepared to testify completely and accurately about his involvement in the President and Rudy Giuliani’s quid pro quo demands of Ukraine” and confirmed that Parnas assisted Nunes.

Parnas attorney Joseph Bondy shared the report on Twitter and wrote that he hopes the House Intelligence Committee will "finally arrange to hear my client” and his “pivotal” testimony related to Trump, Giuliani, and the Republican Party, adding the hashtags “LetParnasTestify” and “LevIsKey.”

Bondy later added that Parnas has already “been producing materials” to the committee “pursuant to his prior subpoena” and offered “hard evidence” to investigators.

“Mr. Parnas’ speaking provided Rep. Swalwell the information that Nunes plainly should have disclosed,” he tweeted. “Let him meet with [the House Intelligence Committee].”

Bondy did not deny on Twitter that Parnas was seeking leniency in his own criminal case in his bid to testify to impeachment investigators. He told The Daily Beast that Parnas fired former Trump attorney John Dowd and agreed to cooperate in the inquiry because Trump denied knowing him even though they met numerous times. Parnas’ attorneys and associates have placed him at the center of numerous key events in Trump’s pressure effort on Ukraine and said he is willing to testify to them under oath.

“President Trump’s recent and regrettable disavowal of Mr. Parnas,” the attorney said, “has caused him to rethink his involvement and the true reasons for his having been recruited to participate in the President’s activities.”