In this year of They, we chat with Abby McEnany, Lilly Wachowski and Tim Mason, creators of the new Showtime series 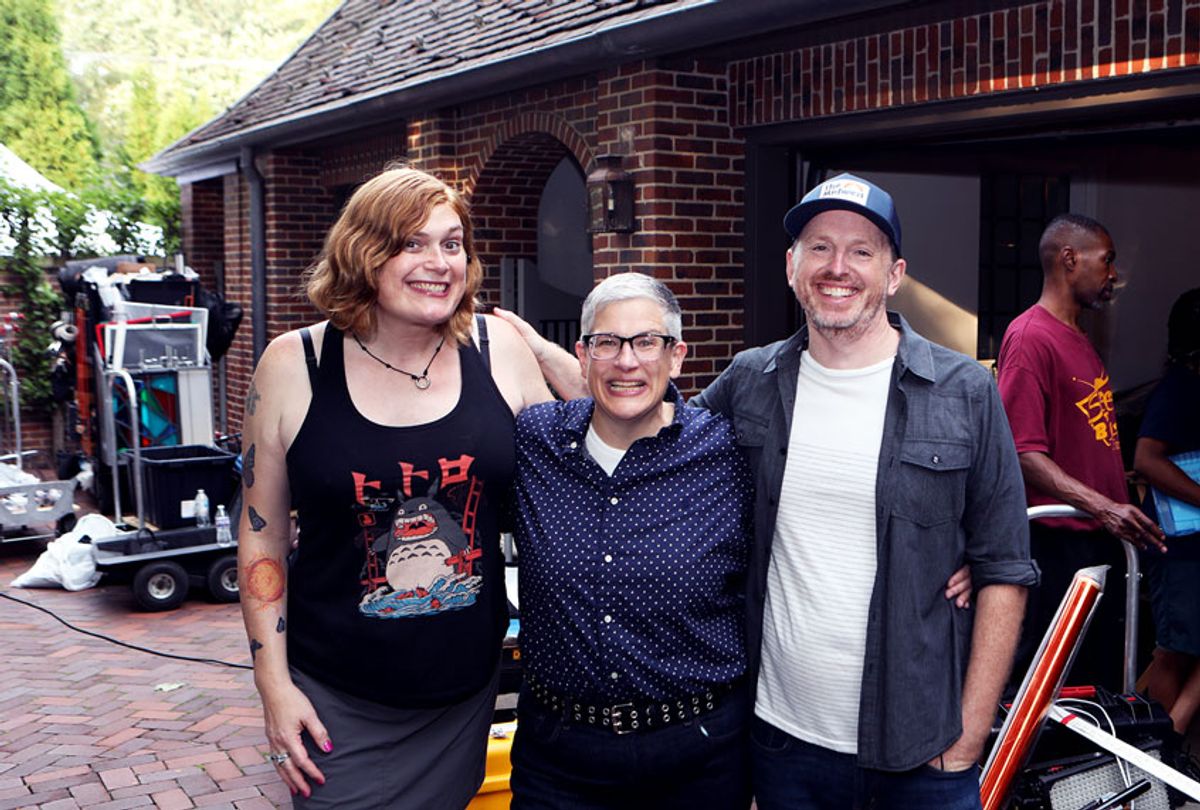 Maybe a show like “Work In Progress” could have made it to TV a few years ago – maybe one like it, yes, but not the honest, heartful, and very funny comedy currently airing on Showtime. Not without its star Abby McEnany.

Granted, Showtime has a lengthy history of embracing LGBTQ-centered series. “The L Word” in all of its incarnations may be its most familiar title, but it also was home to the American version of “Queer as Folk,” the sequels to “Tales of the City” and the short-lived “Leap Years.” People who know those series may recognize what all of them have in common are leads that are conventionally attractive with sculpted physiques.

Three, four, even five years ago, had McEnany and her writing partner Tim Mason pitched this series based on McEnany’s life — which is to say, the life of a self-described depressed, middle-aged queer fat dyke — it's likely they would be informed that “Work in Progress” could only move forward with an actor like Ellen Page in the lead.

McEnany laughs knowingly when I float this supposition to her in a recent interview, recalling that a cousin who has been working in Hollywood for 25 years gave her a similar warning.

“She's like, ‘Just so you know, when you go out for meetings they're going to pitch Hannah Gadsby,’” she said.  “Because people think we look the same, right?”

“And we are obviously very different people,” she adds. Then McEnany, ever the humble and affirming person that she is, quickly backtracks a touch. “She's also so amazing and I just, oh my God, she's so fascinating and fabulous and smart and so this is not just something I diss on Hannah Gadsby . . . Wow, I have a diet Coke high!”

An actor playing a fictionalized version of their self often takes pains to differentiate between their true personality and the version we see on the screen. But spending time in the presence of McEnany, her writing partner Tim Mason ,and their co-showrunner Lilly Wachowski makes it very obvious that the Abby we see in “Work in Progress” is only a few beats off from who McEnany actually is.

No other actor, regardless of her name recognition, could hope to approximate the same sweet if awkward ease McEnany achieves in each episode. And that's why Mason and McEnany went into every pitch with a dogged insistence that the series could not go forward without her at its center.

“This is an industry that sees one fat older dyke, and it's like, ‘Oh, okay, well, we’ve got one of those,’” she said.

But TV has never experienced a person quite like Abby. And 2019,  which Merriam-Webster has declared to be the Year of "They," feels like the right time to get to know her.

From the pitch phase, McEnany insisted upon being the show’s titular “Work.”  “I want to perform and write, obviously, and tell a story, but there was no f**king way that I am creating this show that is very vulnerable, to not be in it. It's so much for-real s**t that I just wouldn't sell it.”

That, she said, was her first point of non-compromise. The second was that that the show’s main transgender character, Chris (played with arch naturalism by Theo Germaine) would not be treated,  as this “‘Ooh. That's a trans man, isn't that sexy or crazy or weird or exotic?’" said McEnany, hopped up on-Diet Coke. "No.  This man is a f**king human being, and this is two human beings that are finding each other and are connecting. And that's just who we are.”

We can’t simply play off that there isn’t a so-called “name” connected to “Work in Progress” that assisted in ushering it into being. Wachowski, who serves as a co-executive producer alongside Mason and McEnany, is best known as the co-creator of “The Matrix” trilogy alongside her sister Lana. And I was very curious to dive into the details of her leap from science fiction filmmaking into the seemingly very different realm of short-form comedy.

McEnany, Mason, and Wachowski all hail from Chicago, a city with a fertile improv scene that seeds the New York and Hollywood entertainment industries. But Wachowski admits she wasn’t particularly familiar with these local stage veterans or the larger community.

“I couldn't tell you one group from another,” Wachowski said. “But I think improv as a concept is tangentially related to filmmaking because it's a communal art form. So, for me in particular, having worked with Lana for so long, I sort of gravitate towards collaboration anyway. That made it perfectly easy for me to drop in.”

“Work in Progress” is an open stage for Abby, an obsessive-compulsive introvert who doesn’t easily fit into mainstream culture’s long-held concepts of gender normative appearance.

The series opens with the scene that sold the pilot, which shows Abby telling her therapist that she’s going to kill herself and explaining that she’s giving life 180 days to turn around. Only after she’s fully unburdened herself does she notice that during her monologue her therapist has dropped dead.

Later when she tells a group of friends about the incident, they respond as close friends would – which is to say, they laugh at the absurdity of the moment, not at Abby.

This establishes the entire mood of “Work in Progress,” the only comedy I can think of in recent memory that confidently merges comfort and cringe in a way that helps viewers release the pressure valve surrounding topics that are causing so much friction and strife in our national dialogue.

This is McEnany and Mason’s doing; the pair have been working together for years in Chicago’s improv scene and exude a casual, bonded familiarity with each other’s beats and habits born out of that partnership. (When discussing the show’s writing, Wachowski was quick to downplay her role: “I was hyper-sensitive about disrupting the chemistry that these two had, and so I just tried to be a good play partner.”)

And their shared awareness of trauma and identity informs their thoughtful portrait of Abby, a woman who keeps her silver hair short, wears button-down shirts and trousers, and is constantly being misgendered and underestimated.

A narcissistic co-worker takes it upon herself to help Abby in ways that are insulting, like giving her a jar of almonds to help her manage her weight. (Abby decides to line up the almonds to represent each of the 180 days in her “I might commit suicide” countdown.)

But she doesn’t try to laugh off any of this ill-treatment or simply roll with it. Instead Abby confronts these slights to varying degrees and with mixed results. One positive development comes early on while she’s on a date with this season’s love interest Chris, and they notice actress Julia Sweeney, playing herself.

Sweeney is the “Saturday Night Live” alumnus whose main claim to fame was the creation of the gender ambiguous Pat from the "It's Pat!" sketches, whose very existence and way of being in the world becomes the butt of the joke. She was the bane of Abby’s (and McEnany’s) existence while Sweeney was on “SNL” (her tenure lasted from 1990 to 1994) and long afterward. But Chris, who is decades younger than Abby, doesn’t know who she is.

Wachowski points out how cool Chris’ automatic response to Abby’s description of the “Pat” gag.  “Oh that's fucked up," he said.

“How often do you get to engage with somebody who affected you 20 years ago, as a cultural icon . . . then bringing that person back into the dialogue now?” Wachowski asked. “You've had 20 years to figure out the language to talk about yourself and go, ‘You know what? That's not alright.’ But to get to bring Julia Sweeney into the show and engage her –  and she's making a conscious act to be in the show – that is so cool.”

Not every interaction goes as rosily. In an upcoming episode entirely constructed around the stress and shame of using public restrooms, Abby demonstrates the coping mechanisms she uses to put other women at ease – mostly speaking loudly and at a high vocal register – in the hopes of preventing horrifying encounters with other women or worse, with security guards or law enforcement.

“We all have been in moments of trauma,” Mason offered. “I always think about like when my dad was in the hospital dying. Even within that, comedic moments happened all the time.”

“There are moments that we are showing that are super-emotional,” Mason continued. “We're not here to lecture. We want to show, not tell.”

But while these scenes speak to the ongoing dialogue concerning transgender acceptance, ranging from the simplest matters of declaring one’s pronouns to discriminatory bathroom legislation, Mason and McEnany show us these moments through Abby gentle effort to navigate life, just like everyone else.

She too is figuring out the new frontiers of gender fluidity, self-definition, titles, and etiquette at the same time everyone else is. She’s also trying some on for herself – she’s not a lesbian, she explains to a friend in one scene, when she talks about her new relationship with Chris, a trans man. She’s a queer dyke, she says emphatically, insisting there’s a difference.

Abby’s story is McEnany’s, of course.  A flashback scene to the 1990s that’s related to her first encounter with Sweeney features Abby entering a party where a guy cruelly refers to her as Pat, snickering as if her presence in his space is a joke. McEnany says that is taken directly from memory.

“I was dating this young woman and I showed up after an improv show in those overalls, and that happened,” she recalled “And it was , let's say, 1999 . . .  I walk in and I get called Pat and I was so tired. Walking into places like that I know it's just going to be like  I’m an alien, or I feel like I'm on a different planet because I don't understand.. I've avoided every place that is like that.”

McEnany continued, “The fact that in 1999, this 23-year-old woman named Katie kicked out her friend that said that to me? That is bonkers revolutionary, that is crazy.”

What grows out of that moment – a conversation with the woman who created Pat that could mark the start of a friendship – is just as important to depict right now, in the era of so-called cancel culture.

The series’ title, “Work in Progress,” connotes room for growth, learning, and forgiveness. McEnany and Mason’s view is, Abby can find a way through life, people like Sweeney and others who made mistakes in the past can be allowed the possibility of evolving in the same way its heroine strives to do.

“Just because you f**ked up doesn't mean you're evil, right?” McEnany said. “You can make mistakes and be willing to learn and be like, ‘Oh wait, okay, let me learn more about this and let's talk about it. I want to be better.’ And I think that we don't have a lot of those opportunities right now, and that terrifies me.”

Luckily she and her partners have created one restorative example, by way of this show.

"Work in Progress" airs Sundays at 11 p.m. on Showtime.