The Cosmic Crisp apple is not the future

Focus groups, consultants and fungicides brought us the Cosmic Crisp. Is its taste worth the cost? 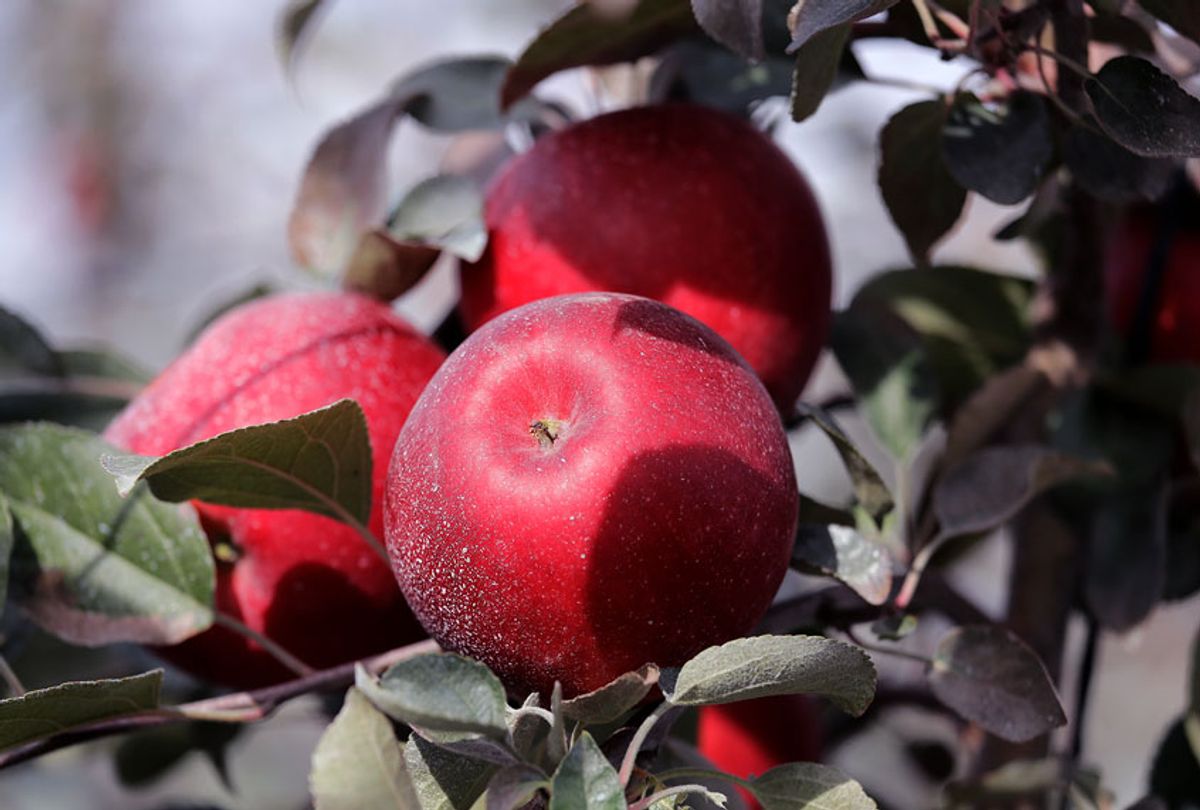 Cosmic Crisp apples, a new variety and the first-ever bred in Washington state, sit on the tree ready to be picked at an orchard in Wapato, Wash. The Cosmic Crisp, available beginning Dec. 1, is expected to be a game changer in the apple industry. Already, growers have planted 12 million Cosmic Crisp apple trees, a sign of confidence in the new variety. (AP Photo/Elaine Thompson)
--

Upon first glance, the Cosmic Crisp apple doesn't appear particularly unique. It is larger than the average apple, certainly, but its mottled exterior could be confused for many other reddish varietals. In other words, one would not know immediately that this humble fruit is the pinnacle of industrial agriculture — encompassing hundreds of millions of dollars of investment, two decades of planning, and hundreds of trees bred, tasted, and culled.

The phrase “apple farmer” inspires images of pastoral orchards and straw hats; yet modern agriculture practices fall far from that imagined tree. A Darwinian tasting process brought the Cosmic Crisp into being: in the late 1990s, Bruce Barrett, an apple researcher at Washington State University, picked the Cosmic Crisp out of 10,000 crossbreeds. The Cosmic Crisp, then known as WA 38, ticked all the boxes: its ability to survive in all of Washington state's microclimates, its taste and texture, and how long it would store without decaying. (Supposedly, the Cosmic Crisp will last around a year in cold storage.) A consulting firm tested the apple with focus groups, where one participant commented on the apple’s dotted lenticels as star-like, which led to the name. As with many modern seeds, Washington State owns the rights, and thus growers must pay royalties in exchange for growing it. The apple was so widely believed to be "the apple of the future" (as the New York Times put it) that 13 million trees were grown at a cost of $500 million. To extend the selling season, producers store the apple in a refrigerated, controlled atmosphere of 1% carbon dioxide and 2% oxygen after treating it with fungicides. Instagram influencers were hired to help hype its release, including a retired astronaut.

In short, the Cosmic Crisp apple — the investment, the marketing, the focus groups, and the vast industrial apparatus that crafted it — is a techno-capitalist triumph. The entire production process is as intricate and involved as any tech-infused consumer commodity, like a smartwatch or laptop.

Knowing that they would arrive this fall, I began, back in September, inquiring to grocery store clerks as to their arrival. I was generally met with blank stares; it would seem consumers were not hotly anticipating the apple’s launch as they might an Apple product launch, despite the comparatively huge investment in the apple’s fortunes.

When I finally spotted one — at a Trader Joe’s in southern California on December 17 —  it was unceremonious. There were a number of apple bins, indistinct aside from signage. The Cosmic Crisp, red and flecked, sat quietly among them.

Even if sales of the Cosmic Crisp are tepid this winter, it is probable that we will see the apple on store shelves for years, possibly even decades. The Cosmic Crisp may well be too big to fail; the collective investment guarantees it.

More important than the production process, of course, is the taste. What does the zenith of industrial agriculture taste like? For comparison's sake, I tasted the Cosmic Crisp alongside four other modern industrial apple breeds: Gala, Pink Lady, Honeycrisp, and the (unenviably named) Envy. All reddish apples, I expected there to be a number of similarities, in particular with Honeycrisp — as the Cosmic Crisp is a crossbreed between that and the Enterprise apple, which I’d hope to add to the tasting, but couldn’t find in grocery stores.

The point of this selection was to get a cross-section of popular and older apple breeds, ones that have often been interbred. The Gala is well known and dates back to the 1930s in New Zealand; it recently surpassed Red Delicious to become the most produced apple cultivar in the United States. Unlike the other taste-tested apples, the Gala was bred prior to the discovery of DNA's structure.

The Envy apple is a cross between a Braeburn and a Gala, introduced in 2009. Pink Lady apples, also known as Cripps Pinks, were created in Australia as a hybrid between the Golden Delicious and the Lady Williams, another apple primarily grown in Australia.

The Honeycrisp, as mentioned above, is a hybrid created at the University of Minnesota in the 1960s, but which only recently became increasingly popular due to the large cell size that produces the apple's storied crispness. Notoriously easy to bruise, the Cosmic Crisp is considered an improvement on it in most ways.

The most curious trait of the Cosmic Crisp is the sound it produces upon taking a bite. It is the platonic ideal of a crunchy apple; Foley artists supposedly record bites of other fruits, like bell peppers and onion, to imitate an apple crunch in film, and indeed, the Cosmic Crisp's crunch sounds ripped from a sound library.

The Pink Lady tasted sharp and tart in comparison to the Cosmic Crisp, whereas the Honeycrisp's sweetness was more overwhelming. Envy had a more complex flavor beyond mere sweet and tartness, and was far more distinct, with a faint tartness hanging in the mouth.

While paired with cheese, the Gala wins out; with peanut butter, the Honeycrisp might be best. But in terms of an overall eating apple, the Cosmic Crisp is the winner. Perhaps all that money and focus groups were worth it.

Still, one arena in which the Cosmic Crisp (and all these apples) lose out is in it being a monoculture. Like all these big consumer crops, all the trees are clones of each other, and you can tell nothing of the origin in which these fruits were produced. Every Cosmic Crisp is identical to every other one. This is "normal" in contemporary industrial agriculture, but it is not ideal. And it is probably not "the future" of agriculture, as the Times opined.

The challenge for Cosmic Crisp growers — and for the entire apple industry in general — is that food trends are changing. Few food critics desire industrial uniformity, and many pine for the variety produced by pre-industrial or indigenous agricultural conventions.

Likewise, consumers seem to be getting hip to the idea that it isn’t necessarily desirable, nor sustainable, for fruit and vegetables to resemble identical commodities as though hammered out on an assembly line. There is a reason “handmade” and “DIY” ethos are in: there is a charm to that which is unique, not mass-produced, to objects that have their own sheen to them. Such a consumer ethos seems to track in lock-step with the current hegemonic social trend of neoliberal identity politics — specifically, the atomized celebration of specific and individual identities. Hence, many consumers are over monocultures: they want to taste the genetic variation, to perceive the fruits' origin, to taste the terroir in their cells.

Luckily, this emergent consumer ethos is also better for the planet. The Incas planted different varieties of potatoes bred for different elevations and observed that this prevented famine, as planting diverse, non-monoculture crops comes with built-in resistance to fungi, pests and disease. Breeding thousands of identical cloned apple trees of any variety means said pests and diseases will be harder to fight back against, as there is no genetic resistance. That same problem may doom the world’s supply of Cavendish bananas — the most common breed of consumer banana in the United States and which, like the Cosmic Crisp trees, are all clones of each other and thus have becoming increasingly more resource intensive to keep growing them.

The Cosmic Crisp may be the apple of the near future. Yet in the long run, it cannot outrun disease, nor the moral imperative to make agriculture less carbon-intensive.