The photos show Parnas alongside Ivanka Trump and Jared Kushner, as well as the president's eldest sons 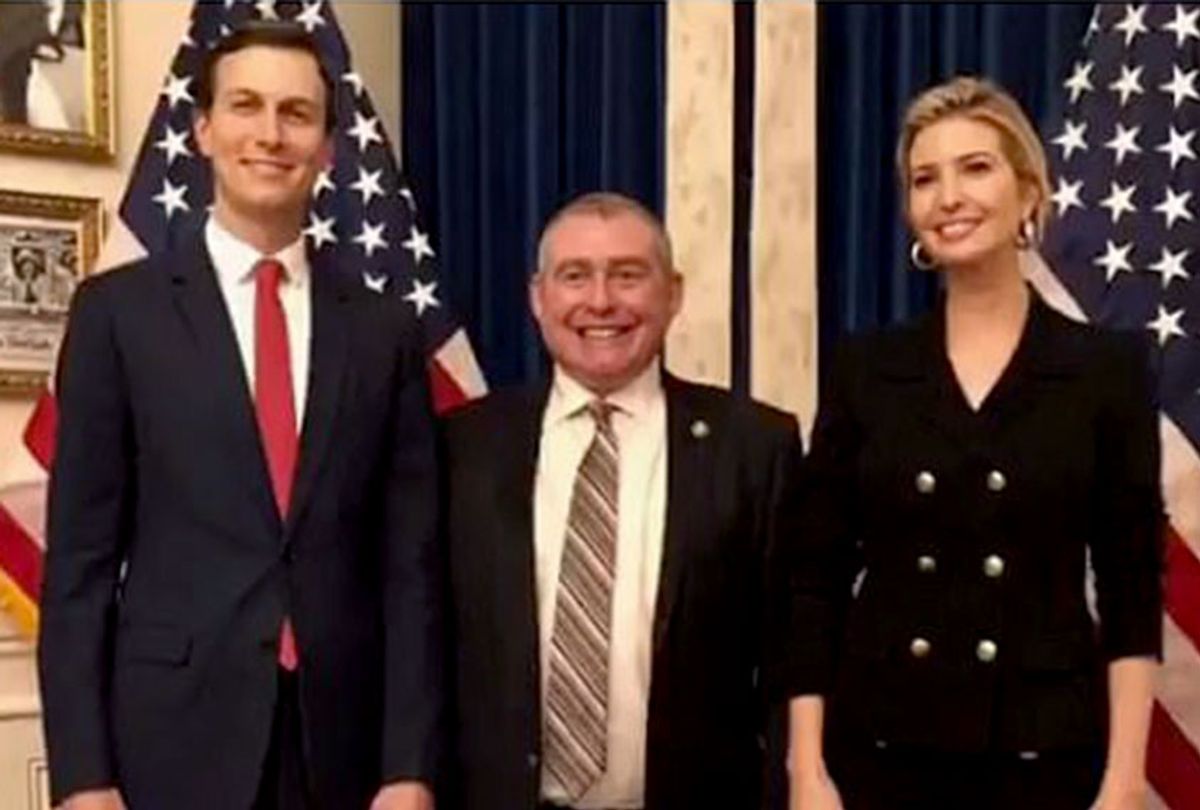 Lev Parnas, an indicted associate of Trump lawyer Rudy Giuliani, met Ivanka Trump and Jared Kushner, according to a new photo released by his lawyer.

Parnas' attorney Joseph Bondy published the photo as part of a montage of Parnas posing alongside numerous Trump family members and allies in an apparent bid to have his client heard by Congress.

The montage shows Parnas with Kushner and Ivanka Trump, as well as the president and his two eldest sons, with Sister Sledge's "We Are Family" playing in the background.

The photos were published in an apparent attempt to show Parnas' proximity to the Trumps after the president claimed that he did not know him.

A White House official told The Daily Beast, the outlet which first published the photo, that the image was not proof that Parnas had a relationship with the couple.

"Jared and Ivanka don't know Mr. Parnas," the official said. "This was taken at an event in a photo line and is one of tens of thousands of pictures they take every year."

Parnas was arrested alongside associate Igor Fruman on charges that they illegally funneled foreign money to Republican politicians last year and pleaded not guilty. Parnas and Fruman played a key role in helping Giuliani search for damaging information on former Vice President Joe Biden in Ukraine, which ultimately led to Trump's impeachment. Parnas initially rebuffed a subpoena from Congress in the impeachment probe, but his attorney has now spent weeks trying to get Congressional investigators to interview his client in a possible bid for leniency in his criminal case.

Bondy said earlier this month that a federal court had granted Parnas' request to provide materials seized by investigators to the House Intelligence Committee. He has since tweeted photos of Parnas with Trumpworld officials, urging the Senate to "call the witnesses," including Parnas.

Bondy said that he hand-delivered thousands of photos, text messages and documents to impeachment investigators this week.

Bondy and Parnas' associates have alleged that he has extensive information about the effort leading to Trump's impeachment. Parnas worked closely with Giuliani and paid him $500,000 through his company, Fraud Guarantee.

The indictment accused Parnas of donating money to then-Rep. Pete Sessions, R-Texas, in an effort to oust former Ukraine Ambassador Marie Yovanovitch. Giuliani later admitted that he needed Yovanovitch "out of the way" to pressure Ukraine to investigate Trump's political opponents.

Parnas claimed that Trump personally tasked him with a "secret mission" to pressure Ukraine into investigating the Bidens at the 2018 White House Hanukkah party, his associates told CNN.

Parnas and Fruman later met with Ukrainian leaders and offered a state dinner Ukraine's president in exchange for a public announcement of the investigations sought by Trump and Giuliani, according to The Wall Street Journal.

Bondy told The New York Times that Parnas later delivered a threat to an aide for new Ukrainian President Volodymyr Zelensky, warning that military aid to the country would be blocked and Pence would not attend his inauguration unless the investigations were announced.

It remains unclear if Democrats want to interview Parnas, since he was not included on the list of witnesses called for by Senate Minority Leader Chuck Schumer, D-N.Y. But the prospect was revived this week when CBS News reported that at least four Republicans were expected to join Democrats in voting to allow witnesses at Trump's impeachment trial.

But The Wall Street Journal reported Monday that the documents turned over by Parnas have caught the eye of impeachment investigators.

"Among the messages Mr. Parnas' lawyer has turned over to the committee are exchanges he had with Mr. Giuliani, former Texas Rep. Pete Sessions, Florida Gov. Ron DeSantis and former Hill columnist John Solomon," who helped push Giuliani's false narrative on Ukraine in the media, the outlet reported.