Pence was "in the loop," Barr "had to have known," and Nunes "knew very well," Parnas claimed to Rachel Maddow 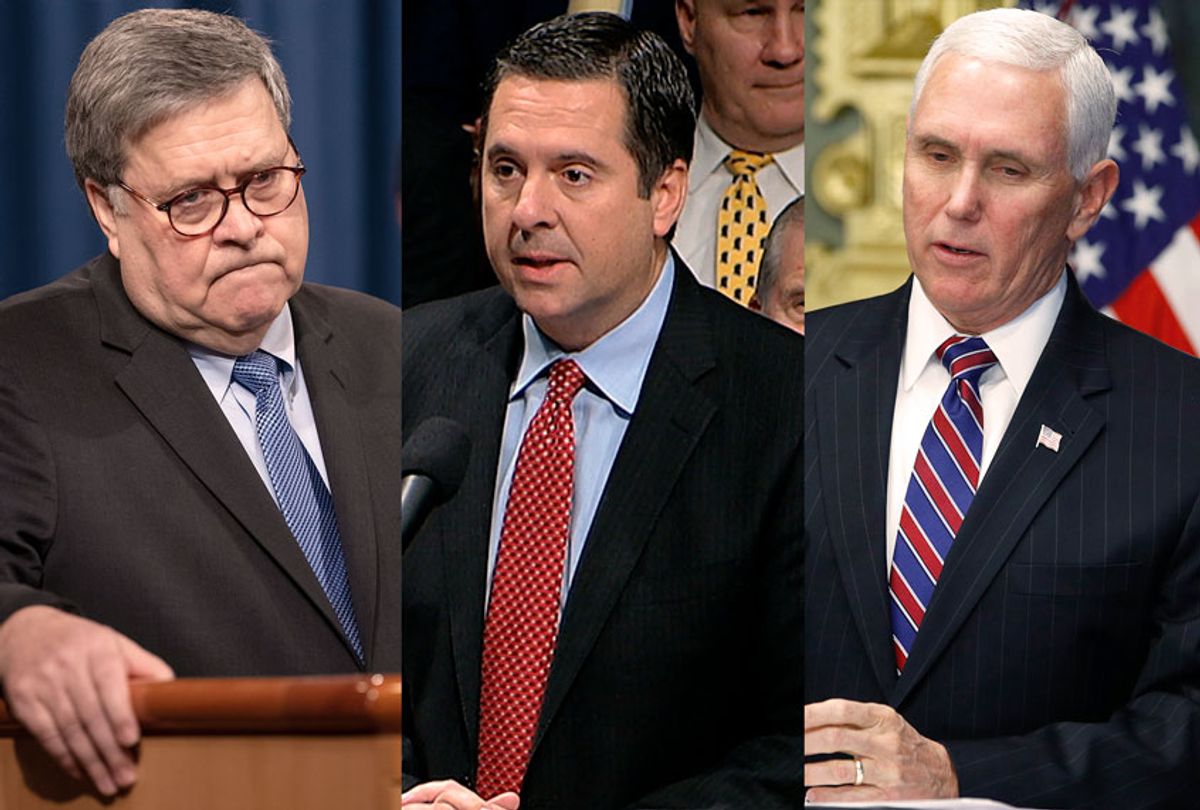 Parnas, who played a key role in Trump and Giuliani's alleged efforts to find damaging information about former Vice President Joe Biden in Ukraine, told MSNBC's Rachel Maddow that he is "100 percent" certain Pence canceled his trip to Ukrainian President Volodymyr Zelensky's inauguration because Ukraine did not announce investigations into Biden and his son Hunter.

Parnas said he was directed by Giuliani to deliver a "very harsh message" to a senior Zelensky aide warning that the U.S. would withhold all aid to Ukraine unless it met Giuliani's demands.

"The most important was the announcement of the Biden investigation," Parnas said in his first televised interview since his arrest last year.

A day after that meeting, Pence canceled his scheduled trip to Ukraine.

Parnas claimed he knows "100 percent" that the visit was canceled in retaliation for Ukraine not going along with the demands.

"The chain of events, that was key to where we are today," said Parnas. "After that, take a look at what transpires. Next within the next couple days, they realize that now they got word. Obviously when Pence cancels, they get word. So now they realize that what I was telling them was true."

Pence "couldn't have not known" about the Ukraine scheme, Parnas said, since "everybody was in the loop."

"Democrat witnesses have testified under oath in direct contradiction to Lev Parnas' statements last night," he told The New York Times' Maggie Haberman. "This is very simple: Lev Parnas is under a multi-count indictment and will say anything to anybody who will listen in hopes of staying out of prison. It's no surprise that only the liberal media is listening to him."

But Parnas' comments echoed the testimony of EU Ambassador Gordon Sondland, who testified that Pence was aware of the alleged quid pro quo demands.

The interview came after the House Intelligence Committee released a trove of documents turned over by Parnas this week. Parnas said in the interview that Trump "knew exactly what was going on" as well.

"They were told to meet with me, and that's the secret that they're trying to keep," he claimed. "I was on the ground doing their work."

Parnas also disputed Trump's claim that the effort was to root out corruption in Ukraine.

"It was all about Joe Biden, Hunter Biden . . . It was never about corruption," he said.

Parnas claimed that the effort also sought information to discredit former special counsel Bob Mueller's Russia investigation. Parnas said he told Ukrainian oligarch Dmytro Firtash, who faces extradition to the United States for corruption charges, that he would help stop the prosecution in exchange for information that could discredit Mueller's probe.

Parnas said he received $200,000 to broker a deal with pro-Trump lawyers Joe diGenova and Victoria Toensing to represent Firtash. Parnas claimed he was "involved" in discussions that Giuliani and diGenova had with Attorney General Bill Barr, claiming that Barr "absolutely knew" of the effort to pressure Ukraine to announce an investigation.

"Mr. Barr had to have known everything," he claimed. "Victoria, Joe, they were all best friends. Attorney General Barr was basically on the team."

Parnas claimed in the interview that Nunes, the top Republican on the House Intelligence Committee, was also part of the Biden effort.

Parnas told Maddow that he did not have "much of a relationship" with Nunes but met him "several times" at a Trump hotel. Parnas said Nunes introduced him to his aide, Derek Harvey, because "he couldn't be in the spotlight."

Parnas claimed Nunes "was looking into this Ukraine stuff also, and wanted to help out."

Parnas said he did not have to catch Harvey up on the details of the scheme because he "knew about it already. He had a lot of information already."

Parnas claimed he was later "in shock" when he saw Devin Nunes preside over hearings about the effort because he and Harvey were "involved in getting all of this stuff on Biden."

"[Nunes] knew very well that he knew what was going on, what was happening. He knows who I am," he added.

Nunes previously claimed he did not remember speaking to Parnas even though the House Democrats' impeachment report showed numerous contacts between the two men. Moments after Parnas' interview, Nunes remembered Parnas while discussing the claims with Fox News.

Nunes told the network he didn't "recognize the name Parnas" at the time but now "remembered that call, which was very odd and random."

Nunes dismissed Parnas' claims, arguing that he was "someone who doesn't tell the truth" and is under indictment.

"I said great, just talk to my staff and boom, boom, boom. Which is normal, standard operating procedure," Nunes said.

Giuliani, who defended Parnas after his arrest, also dismissed his former associate's claims in an interview with The Washington Post.

"Who cares?" he told the outlet. "Believe him at your peril."

Parnas later told CNN that he spoke out because he did not want Trump and his associates to throw him under the bus after the president denied knowing him despite appearing in numerous photos together.

"I thought they were going to shut me up, make me look like the scapegoat, and try to blame me for stuff that I [haven't] done. But with God's help and a great legal team that I have beside me, we were able to get the information out," he said, warning Trump about denying he knew him. "I welcome him to say that even more. Every time he says that I'll show him another picture. He's lying."