Scarcity — and the greed of the oligarchs — have exacerbated this crisis 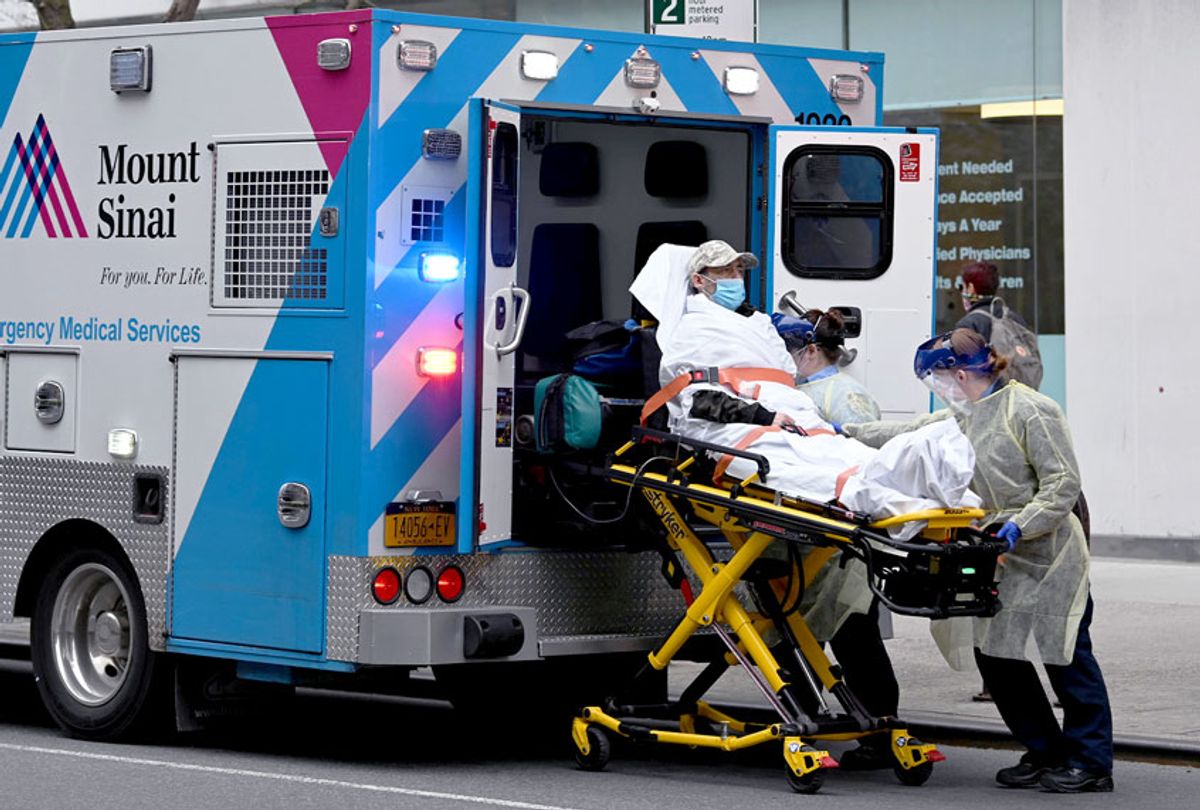 EMS workers wearing PPE load a COVID-19 patient into an ambulance in front of a CityMD amid the coronavirus pandemic on April 12, 2020 in New York City (Alexi Rosenfeld/Getty Images)
--

We can't cure what ails us until we figure out the disease that afflicts us. And so far, when it comes to COVID-19, the empirical science has been a moving target wrapped up in qualifications and hedges.

If A is true and B is true, all we really know is scientists are still on a scavenger hunt for clues. So, for now, your scientific take on this crisis is like a veritable Rorschach test that reflects your own fears and hopes about what you want to be true.

Back to their normal

The powers-that-be guiding our post-mortem debate frame it around whether or not we need universal testing "so we can all get back to work." Of course, this resumption of our economy will be crafted so as to maintain the same oppressive wealth pyramid that made us so vulnerable to the coronavirus in the first place. But with the desired testing protocols in place, the lower strata can worry their status as an essential worker preordains a premature demise like coal miners.

Take a look at a map of where America's wealth inequality is most pronounced and then overlay the data from the COVID19 death toll. You will see the pandemic's path through the America so many in Washington ignored for decades as they tilted the economy to favor the one percent.

Crucial to the corporatist continuity is the deliberate undercount of the dead bodies and the promotion of an image of managerial competence of a government to deliver us from a virus they ignored and then spread by fumbling their response.

Get on with it

The push to reopen without universal testing and contract tracing is coming from 21st century Malthusians, who — as their team captain in the White House has said —want to just let the virus "rip" through society. This crew doesn't want to waste any more time, because for them time is money. They argue waiting to re-open the economy until there is universal testing and contract tracing will kill more people than COVID-19 itself.

They believe from their private box seats that a mass die-off of the most vulnerable —most likely blue-state urban-dwelling Democrats or undocumented immigrants, they hope — would be an interim solution and a solid down payment on herd immunity and the establishment of the 21st century post-COVID-19 master race.

Just think of how long they could put off really taxing the rich if the weakest in society were no longer of anyone's earthly concern. And, as for the undocumented, they shouldn't have been here in the first place; and COVID-19 has the no-knock warrant that Stephen Miller wanted ICE to have.

Remember, these are the same folks that put immigrant children in cages. They have made very clear that they do not see undocumented immigrants as human beings and that in their world informed by scarcity there's barely enough to go around for American citizens.

And that was before Trump's Great Depression. You don't think Miller doesn't want to step up his game to help insulate Trump's base in the red states who are now feeling the COVID-19 heat in meatpacking plants that employed so many immigrants?

Why, for him it would be the restoration of the white America he and his boss always promised. Get rid of the immigrants first; then, thanks to the Depression 2.0, you will have red blooded Americans lining up for those same jobs they once thought beneath them.

This white supremacist worldview was bluntly called out by David Frum, a former speech writer for George W. Bush, when he appeared on MSNBC with Ari Melber on April 24.

Frum observed that ProPublica had published a list of seven basic action items, like contact tracing, that should be in place before re-opening the economy. Yet, Frum rightly observed none of these public health prerequisites were in place even as Georgia Governor Brian Kemp, a Republican, moved to re-open the Peach Tree state's economy.

This, Frum explained was moving "toward the policy" of "let's take the punch" and reopen accepting 'that there may be hundreds of thousands, or some double hundreds of thousands, of Americans killed. They're going to be mostly poor and minorities, mostly not going to be Trump voters. Let's take that punch and push through and try to get to herd immunity as fast as possible."

Of course, what this grand plan ignores is that it assumes that once a person has become infected with the virus, experiences a bout with it, and survives, they will be immune from contracting the virus again.

Yet, there have been cases of an individual surviving COVID 19, only to get re-infected.

NHK, Japan's public broadcaster, reported on the vexing case of a woman, in her 40s, working as a tour bus guide with tourists from Wuhan, China, in January. She had tested positive for the coronavirus on January 29 and was declared cured on February 6.

Later in the month, she started to suffer symptoms and came up coronavirus-positive a second time.

This was not a one-off instance.

There were sufficient enough cases like this for South Korea's Centers for Disease Control and Prevention (KCDC) to posit the recurrence of the virus  in patients was evidence the virus could be "reactivated."

And if there is not global scientific consensus on if you can get re-infected, there certainly is no empirical understanding of how long such an as-of-yet-unconfirmed immunity might last.

For want of a mask…

In the fog of the viral war, commentators have lost sight of how a decades-long  bi-partisan embrace of militarism against the "axis of evil" set the stage for the scarcity of basic health care equipment and the broad deterioration of public health that makes the United States such a ripe host for the coronavirus.

Early on, the Center for Disease Control (CDC) issued guidance which greatly eroded the occupational health protections for front line health care workers because it required them to re-use N95 masks that were supposed to be disposed of after each clinical encounter.

This guidance was issued not because COVID-19 was any less infectious or deadly, but because the agency was worried there was not enough N95 masks to go around.

And just as the nurses' unions predicted the CDC "crisis" guidance was followed by healthcare workers getting sick, in some cases dying, as the virus continued to eat its way through the oldest, poorest and most vulnerable we have so long neglected.

ProPublica reported physicians and nurses "from New Jersey to California to North and South Carolina" all confirmed that hospital administrators had "normalized poor infection control practices — putting them at risk and likely spreading the virus."

As a consequence, the non-profit news source said clinicians felt conditions were "so unsafe" they were "forced to choose between their livelihoods and risking their lives" and as a result were in some instances just "walking away."

On April 17, the CDC released a study that looked at confirmed cases of COVID-19 and found that between Feb. 12 and April 9 9,282 health care workers had been infected, with 92 percent reporting at least one symptom like fever, cough, or shortness of breath.  The remaining 8 percent did not report any of these symptoms.

On April 20, the New York State Nurses Association (NYSNA) sued the New York State's Health Department and two hospitals for allegedly failing to protect workers against the coronavirus by not providing sufficient personal protective equipment (PPE) and ordering them to work prematurely after being sick with the virus.

"More than seven in 10 of our nurses are reporting exposure to COVID-19, and most are still untested. These lawsuits were filed to protect our nurses, our patients and our communities from grossly inadequate and negligent protections," NYSNA Executive Director Pat Kane said. "We cannot allow these dangerous practices to continue."

According to Crystal Lewis's reporting in the Chief-Leader, the NYSNA reported that 954 of their members tested positive for the coronavirus, and 8 have died.

A slide years in the making

As more and more health care professional succumbed to the virus, it burrowed even deeper into our nation's poorest minority neighborhoods — the same ones that had been left to rust after the Great Recession.

While experts argue over how to account for the dead bodies and what it should say on the tens of thousands of death certificates, you can be sure we won't see a reference to our society's two most enduring pre-existing conditions: greed and scarcity.

If anybody in a position of real power had bothered to notice, they would have seen just how vulnerable we were — with the average life expectancy in the U.S. on the decline for three years in a row.

Ironically, the last time that happened was back around the time of the 1918 Spanish Flu pandemic Woodrow Wilson did his best to ignore.

Have no fear: our 21st century essential workers, we will memorialize you in gauzy commercials with swelling sentimental music as an audio underbed as we guarantee your right to a mask a week.

You will do your patriotic part, as did your slave and indentured servant ancestors before you. With selfless zeal you will ensure that the ruling class can remain safely ensconced in their home bunker and run the world remotely — for it is your destiny to serve, and they love you for it.