The former first lady's adaptation of her bestselling memoir is kind, uplifting, and light on any new revelations 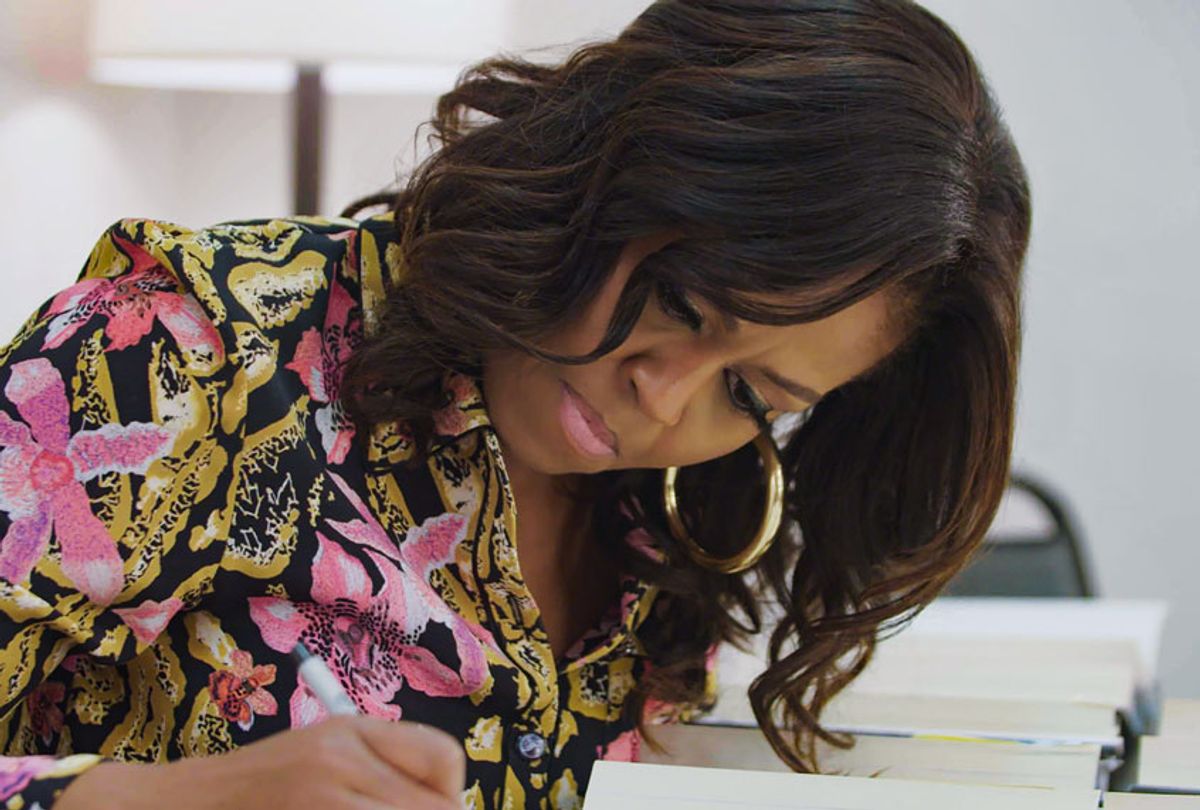 Two scenes in "Becoming," the Michelle Obama documentary now streaming on Netflix as one of the many movie offerings in May, demonstrate the tension between what director Nadia Hallgren has created and what I suspect a segment of the audience wants it to be.

The first arrives at the beginning with Obama, dressed to the hilt and ready to hit the stage, squeezing the shoulders of her longtime aide and friend Melissa Winter. Winter is overcome with pride for the former First Lady and admits she's holding back tears. Obama, quietly reassuring, holds her confidante for a moment and gives her permission to let her emotions flow. "You can cry your eyes out," she says, "but I can't do that right now."

The other scene happens midway through the film when Obama's husband, former president of the United States Barack Obama, makes a "surprise" (read: completely scripted) onstage appearance in the middle of a tour event. He jokes that he's playing the Jay-Z role to his wife's Beyonce show – just dropping in to provide an enhancement. He lovingly ribs Michelle about a few of the anecdotes featuring him the book; she reminds him she's the star. The audience eats it up.

Taken together, these moments substantiate the movie's charm while also exhibiting why "Becoming" falls short of being the revealing biographical experience some are surely expecting.

Maybe you plan to settle in for an 89-minute feel-good experience that allows you to bask in Obama's calm dignity and marvel at the elegance with which she wears the First Lady mantle even now, nearly four years after she and her family exited the White House.

If that is all you desire, "Becoming" will oblige you by showcasing the elegant, regal and eternally composed woman advising us, perhaps too optimistically, that "when they go low, we go high."

But those hoping for additional insight into Obama by way of fresh revelations or previously undisclosed anecdotes are likely to be disappointed. This is less of a cinematic expansion of Obama's bestselling memoir than it is a chronicle of her 34-city book tour, with more in common with Beyonce's "Homecoming" than, say, Hulu's "Hillary" or even the CNN doc "RBG."

And it also reminds the critical viewer of why a biographical film produced by its subject does not always grant the audience a sense of new disclosure. ("Becoming" comes from the Obamas' Higher Ground Productions and is part of the couple's exclusive deal with Netflix.)

By this I don't mean to imply that Obama is hiding some nefarious side, or that the film doesn't show us her tenderness. It's the opposite in fact; among its most warming moments are those when she talks about the joy she has in meeting people, explaining that all of her official interactions are sanitized. "It keeps me connected," she says, adding that whenever someone shares a personal insight with her, she's riveted. "Don't look around. Don't look beyond them," she tells herself. "Look them in the eye and take in the story."

Nor is there anything negative in likening the production to Beyonce's 2019 Netflix film of her Coachella performance which, in fact, is a work of art containing layers of meaning. Rather, like "Homecoming," ""Becoming" spends a lot of time on the process of being Michelle Obama and reconstructing the story of this living inspiration.

Being Michelle Obama is a studied effort that looks exhausting to maintain even if she doesn't openly admit it. Even when, in one scene, she leans against a door frame and waits for an assistant to fetch her, accompanying her from one location to the next, her serene expression never breaks.

"And now I can leave," she says, the faintest sense of humor in her voice as she adds, "See, this is not normal."

Hallgren spends time with the Secret Service agent who has been by her side since the Obamas were on the campaign trail, and interviews her stylist Meredith Koop, the woman responsible for making her a fashion exemplar which, in the case of the first African American First Lady, is the equivalent of a royal armorer. Koop's insight into her outfit choices for Obama's tour is fascinating, actually, particularly as she points out the increased sparkle factor in her look.

"When I look at this suit," Koop says, calling attention to rhinestone cascade from a lapel, "I do see Elvis and I don't have a problem with that."

That's how most of the world sees Obama too. What we might be aching to see more of are the realities that went into creating this Elvis equivalent. "Becoming" gives the audience some of this with its workmanlike jog through her biography – her upbringing on the South Side of Chicago, the anecdote about the guidance counselor who attempted to dissuade her from applying to Princeton (she didn't listen, obviously), and the wisdom she gained from spending time in halls of power all over the world.

Connecting with young people is her imperative, one stated at the start of film and revisited throughout by way high school students she meets along the tour whom the documentary briefly profiles. They're meant to elaborate on Obama's philosophy on the power of personal story which, as she tells one young woman who attends school and works to support her family, "That story, what makes you seem so ordinary, is your power."

"Becoming" the book probably distills this more effectively than "Becoming" the film because of the documentary's emphasis on the rock star factor and how they mute the moments that balance it out, like the scenes featuring her family admitting her mother was softer on her brother than Michelle, are enlivening and too sparse.

At the same time, it doesn't sweeten over the pain Obama endured on the 2008 campaign trail, or edit her acknowledgement that her family's eight-year occupancy White House for eight years was a provocation and affront to millions of Americans, whether they'd admit it or not.

We've seen her talk about this, heard her discuss the ugly coded language around statements taken out of context – most famously this line from the 2008 campaign trail: "For the first time in my adult lifetime, I am really proud of my country, and not just because Barack has done well, but because I think people are hungry for change."

Fox News contributor Juan Williams called her Stokely Carmichael in a pantsuit. And actually, the visuals of that passage are stunning, giving viewers a direct juxtaposition between the confident, open Obama before that moment and the less scrutable figure afterward.

"I had to be much more scripted than I was before," she explains, later adding about the experience, "The only thing I can do is share that that does hurt. . . . That changes the shape of a person's soul."

"Becoming" isn't lacking in empathy, inspiration or positivity, or even candor. Obama doesn't speak ill of the Trumps or refer to that fateful inauguration day beyond telling the audience a funny story about her allowing Sasha and Malia one last sleepover with their friends on their final night in the White House.

She even sustains that she understands the people who voted for Trump. The slap in the face, she says, are people who sat out the election entirely, especially she says, our people. "After all that work, they just couldn't be bothered to vote, at all. That's my trauma."

Obama does admit that she wanted to weep on that day, but waited until she and Barack were on the helicopter flying away . The half hour she estimates she spent sobbing is characterized as "the release of eight years of trying to do everything perfectly."

But she also insists in her memoir and the film, that so little of who she is happened in the eight-year period during which the world came to know he famous side of her. "So much of who I am happened before," she says. "Becoming" shows us part of that profile. Filling out the rest of that portrait will be a job for someone else – at a much later date, one imagines.