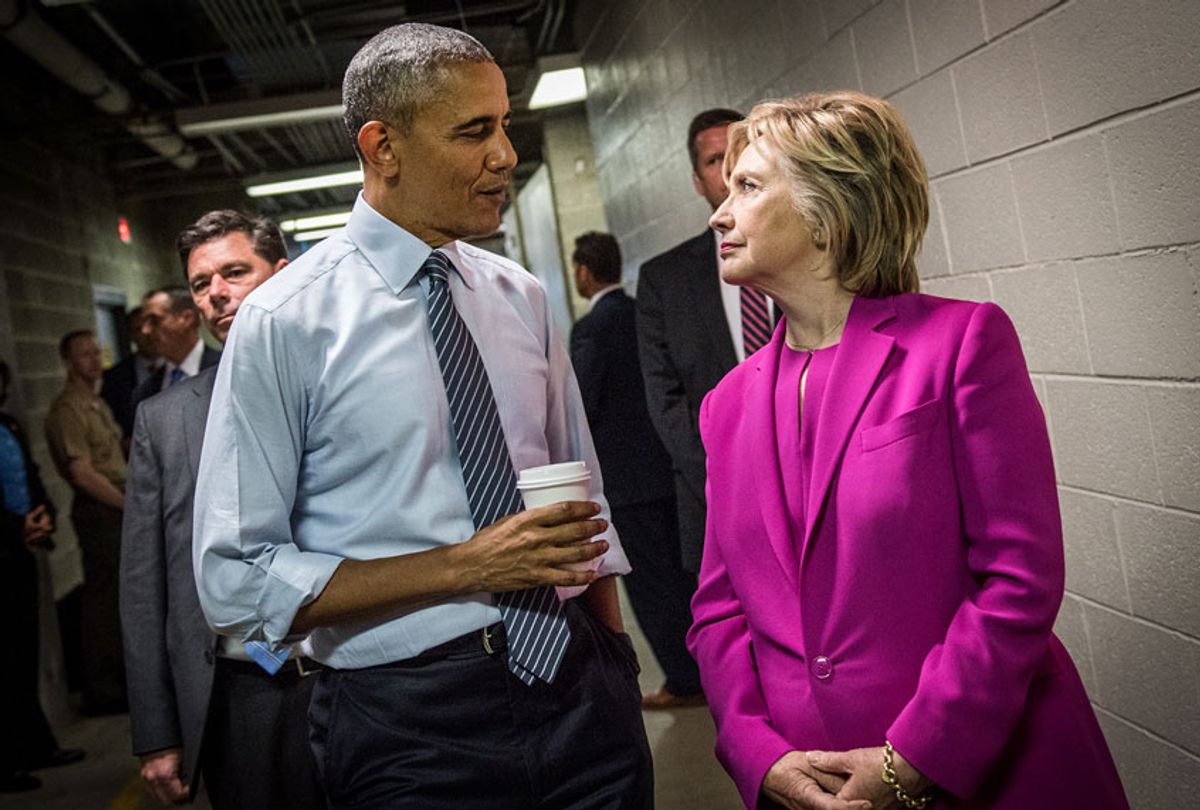 Not all women. A woman. This woman, the one named Hillary Clinton. You probably have very specific thoughts about her. Even people who profess to be disinterested in her tend to be passionately, provocatively disinterested.

Nanette Burstein's four-hour documentary series "Hillary" does its best to explain how those feelings took root without explicitly landing on an explanation as to one single "why," because there isn't just one. A number of Clinton's colleagues to whom Burstein speaks mention the same refrain: when pressed, a share of her detractors simply say they don't like her.

Regardless of how you feel about Hillary Clinton as a wife, a mother, First Lady or politician, "Hillary" prods at the culture's underlying feelings about women – women who dare to run for office, women with professional ambition, women and their place in modern society.

A look at her resume shows her as woman who actively shows up at each of the  crossroads of the modern feminist movement: she was forged in the fire of second-wave feminism, worked with Children's Defense Fund founder Marian Wright Edelman, and in 1974, was part of the impeachment inquiry team tasked with researching the procedures of impeachment and determining whether Nixon's actions met the standards of abuse of power.

Over the years, Clinton did everything she could to win over the public throughout her long and storied career, one that took her around the world and made her a feminist icon. But no matter what role the public cast her in, she still couldn't overcome a slew of stubborn trust issues that dogged her all the way to Election Day in November 2016.

One piece of evidence Burstein includes is an ABC news clip that aired in the wake of Bill Clinton's admission that he had been unfaithful to Hillary with a White House intern, Monica Lewinsky.  Even as a "victim" in the affair, as news anchor describes her, the public had its doubts. According to an ABC poll taken back then, some 79 percent of Americans believed she knew about the affair for months.

Moments like this make "Hillary" exciting, infuriating, funny, frustrating, devastating, and hopeful in one swipe, especially as we brace for yet another season of acrid political posturing and, as Salon's editor in chief Erin Keane beautifully put it in 2018, anger pouring out of us like swarming bees. "Hillary" stings. It can also be a soothing, honeyed balm.

The series begins streaming on Hulu March 6, just in time for Super Tuesday, but it makes its Sundance premiere this weekend. People have already begun talking about it thanks to an interview she gave to The Hollywood Reporter that ran last week. Specifically it was the tea she spilled regarding Vermont Senator Bernie Sanders, currently one of the frontrunners for the Democratic nomination, that kicked up a buzz. "Nobody likes him, nobody wants to work with him. He got nothing done," Clinton says in "Hillary." "He was a career politician. It's all just baloney, and I feel so bad that people got sucked into it."

"That assessment still hold?" the THR reporter asked, to which Clinton replied, "Yes, it does."

Burning on Sanders isn't going to make Clinton any new friends in Washington, D.C., but at this point she's done seeking office. Any office. And this adds a layer of poetic truth to "Hillary." Now that she's run the emotional gauntlet of public life, she has no reason to tiptoe around anyone's feelings.

Even so, her opinions still hold tremendous weight in politics. (If that weren't the case, Hawaii Rep. Tulsi Gabbard wouldn't be hitting her with a lawsuit.)

"Hillary" represents a pivot for Clinton, whose staff recorded more than 1,700 hours of footage capturing significant moments of her campaign. Burstein, who co-directed the 2002 Robert Evans documentary "The Kid Stays in the Picture," uses some of it to create a narrative that leaps between key moments in her campaign – her massive loss in an early primary, her comeback, her securing of the nomination, and naturally, the bloody slug fest with Donald Trump that follows – and formative flashpoints in her past.

The first episode, "The Golden Girl," explores her earliest years from the child of Republicans growing up in the suburbs of Chicago who became politically and was inspired to become an activist, she says, when she went to hear Martin Luther King, Jr. speak.

As Bill Clinton's wife she made concessions to help him win election in Arkansas, such as surrendering her insistence in keeping her name and taking his. That was one of the earliest corrections she was made to make, and probably the easiest. Her media gaffes in the run-up to the 1992 election receive an appraisal in the second episode whose cheeky title "Becoming a Lady" belies the terrifying malice that rose up to greet her efforts to bring universal healthcare to America (and reminds us that before there was Obamacare, the right was seething over Hillarycare or Clintoncare).

"I didn't play the game well enough," she says of her relationship with the media. "I knew there was a game to be played, and I was striking out all the time."

"The Hardest Decision," Episode 3, may be the series' rawest, most emotional, and from the perspective of known history, the blockbuster hour of the bunch. In that hour Clinton is asked to relive the pain caused by Bill's infidelity with Lewinsky, awful in itself but made even worse by the fact that he lied to her about it. Revisting Hillary's sit-down with Matt Lauer (!) in which she utters words that came back to haunt her time and again – that "the great story here for anybody willing to find it, and write about it and explain it is this vast right-wing conspiracy that has been conspiring against my husband since the day he announced for president" – just makes a person shrink inside, knowing what we know now.

And Bill Clinton excoriates himself in a way not often seen. He explains his motivations for cheating on Hillary and lying to her, and calls himself stupid for doing so, his eyes reddening with tears all the while – which, naturally, you will either believe come from a deep well of hurt or some talent for acting.

In a manner of speaking, Hillary was partially right about that right-wing conspiracy. In fact, some of the moments seen the fourth episode "Be Our Champion, Go Away," show how aware she was of the 2016 election's broader stakes, ramifications the electorate was too distracted to care about. Her campaign videographer captures her speaking in a low voice with her running mate Tim Kaine about Trump: " I don't say this lightly. His agenda is other people's agenda. We're scratching hard. We're trying to figure it out."

"This Ukraine thing is weird," a team member whispers – before Clinton expresses concern and bewilderment over Trump's connections of Paul Manafort – "and [Michael] Flynn, who is a paid tool for Russian television," she says, continuing, "The way that Putin has taken over the political apparatus, or is trying to . . . " then the camera is shooed from the room. But point taken: Hillary knew.

Problem is nobody trusts Hillary. Not then, not now. Russian hacking? But her emails . . .

Burstein's style brings out the humor and humanity in her subjects via interviews and interspersing mundane moments in the subject's life with polished frames that keep the conversation moving and vivid. This ensures "Hillary" is candid to a degree that establishes it as the definitive profile of who Clinton is as a politician and a person, believe her or not.

Tangentially "Hillary" also tells each of us a fair bit about ourselves and how we really feel about women – and this includes other women. During a recent press event and in the documentary friends and associates refer to Clinton as "the tip of the spear," the woman who carves the path for other women but does not manage to get to the mountaintop herself. But it also reminds us of how many expectations we've placed on her shoulders over the years.

That weight has taken its toll. She doesn't hesitate to admit the times when she's screwed up, when she wished she had employed different tactics, and she does this not with head bowed or full of steam, but with the air of a fighter scarred up from willingly falling on her own sword too many times.

There are very few facts in "Hillary" that other documentaries, whether solid or entirely unreliable, haven't covered in some fashion. But what Burstein offers that previous works don't is an emotional journey through Clinton's life in her words and those of her family and friends, some 45 of them (including Barack Obama, her main Democratic rival in the 2008 election) and not all of them entirely without criticism.

Missing from that mix, but not for lack of trying on Burstein's part, are accounts from her conservative rivals, except for former Senate Majority Leader Bill Frist. "Hillary" also strides through its subject's life without getting any perspective from Lewinsky, a woman with the most significant impact on Clinton's marriage and political career, and who has been busy with her own biographical documentary projects lately.

Anyway, that's a bit less understandable than the director's intentional omission of any interviews with Sanders and her 2016 rival Donald Trump who, as Clinton says with a chuckle, has allowed her to live rent-free inside of his head.

Besides, it's Massachusetts Sen. Elizabeth Warren, Sanders and Trump's main target this time around, and Minnesota Senator Amy Klobuchar who are forced to contend with the mudslinging, insults to their character and, yes, that "likability" factor.

"Hillary" also arrives a couple of months before PBS' "American Experience" debuts its four-hour, two-part profile of George W. Bush, a figure who is at least as polarizing as Clinton. What's interesting is that the producers of the series have a rule of waiting at least a decade after a leader leaves office to profile that person.

Burstein's documentary, in contrast, benefits by airing so closely to 2016, which has as much resonance in this election year as it would in any other. The former Secretary of State would have become the first woman president. Many insist she should have, given that she won the popular vote by three million votes but as Trump likes to remind the world, lost the Electoral College.

And that loss in 2016 is a throbbing purple bruise that still smarts now, nearly four years later, for reasons that need no explanation but require perhaps a bit of vicarious primal release.

"I don't know if we're ever ready for the person who has to blaze the trail," one of Burstein's interviewees observes, summing up the thesis of "Hillary," a work that doesn't necessarily demand a reappraisal of our feelings about its title subject but leaves room for some consideration. More than this, and far more importantly, it exists as a documented proof of a woman, this woman's stubbornness and resilience. Love her if you like, loathe her if you must.  But at the very least we might learn from the battleground that was and is her life and keep pushing forward.