From "Solar Opposites" to "Midnight Gospel," recent otherworldly animation is worth the head-trip

E.T.s on Earth, universe-hopping, and onscreen psychedelia make sense of our own world that feels deeply alien now 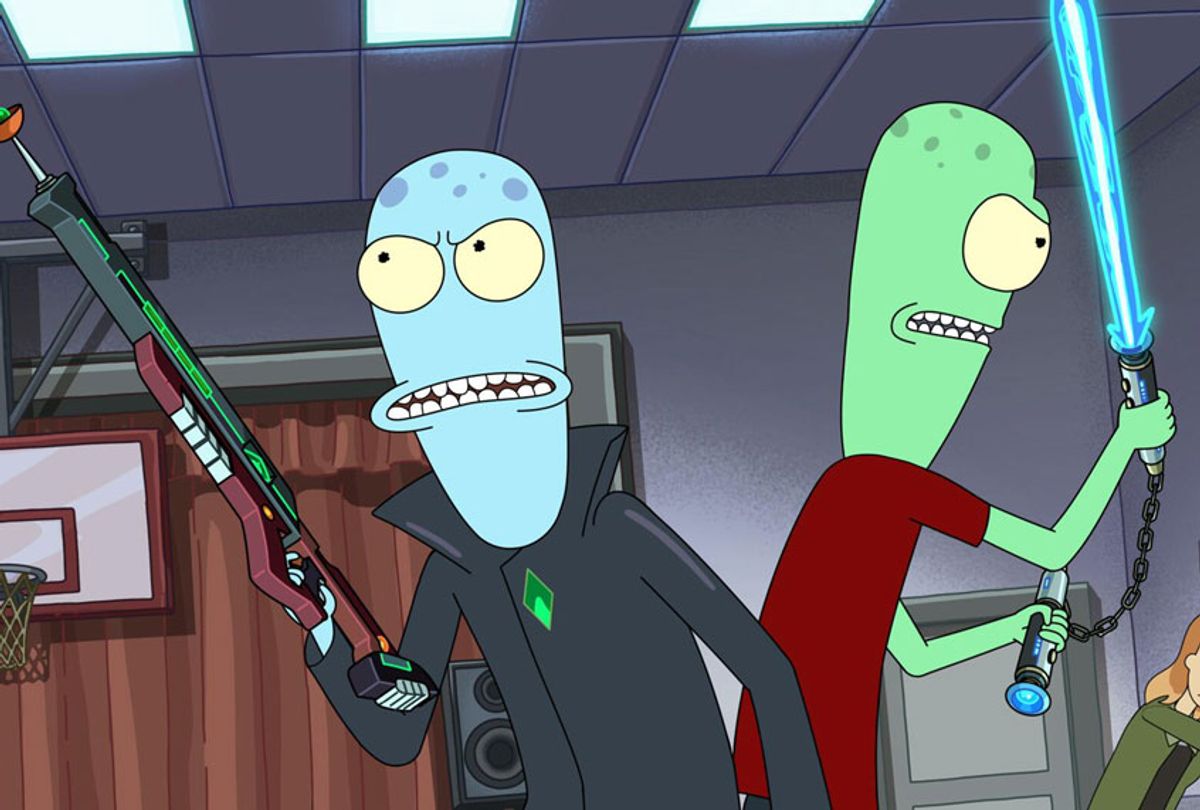 In the opening of the new Hulu adult animated series, "Solar Opposites," Korvo — a snarky blue alien voiced by Justin Roiland — explains his family's current predicament: "We crash-landed on Earth, stranding us on an already overpopulated planet. I hate Earth. It's a horrible home — and one of these days I'm just going to blow it up and be done with the whole stupid thing, I swear to God."

Stranded with him is his alien family: Terry (Thomas Middleditch), their children/replicants, Yumyulack (Sean Giambrone) and Jesse (Mary Mack). And then there's the pupa, a sentient supercomputer that will someday be capable of universal annihilation, but is currently a mewling blob carried by Terry in a Babybjörn.

The framing of "Solar Opposites" isn't revolutionary; think of it as a galactic "Green Acres" where the newcomers have to adapt (or not) to the odd customs of the natives. Cultures clash and laughter ensues. And like other Fox-developed adult animated series, like "Bob's Burgers" or "The Simpsons," "Solar Opposites" is grounded by a family unit that, for all their foibles, is genuinely fond of each other.

It will also look and feel familiar to fans of "Rick and Morty," as both were created by Roiland and feature the work of former "Rick and Morty" writer and producer Mike McMaha. The animation styles are nearly identical and it almost feels like a natural extension of that series' universe, minus one thing: the overwhelming existential dread.

Whereas "Rick and Morty" is a ragtag exploration of nihilism and feelings of personal insignificance — the idea being that if no one belongs anywhere and everyone is going to die, what's the point? – "Solar Opposites" has a sunnier, but equally inquisitive, outlook.

Which, in these weird, weird times, will likely be deeply appreciated by viewers.

You see, this alien family has dichotomous views on their new earthly neighbors. Korvo, obviously, isn't a fan. Terry has adapted to life on earth. He binges TV shows, enjoys checking out the makeup counter at Bloomingdales, and takes the pupa to watch the labradoodles at the dog park. Yumyulack is both disgusted and fascinated by them; he is forever shrinking the people in his life to run tests on them and keep them in a lab maze/terrarium. Meanwhile, Jesse just simply wants to fit in with her new high school peers, and in expressing that desire, she sounds a lot like someone in quarantine talking about The Before™.

"I want to eat lunch with friends and see movies with boys," Jesse wails at one point. "I just want to chill at the mall."

Korvo's stony "I hate Earth" facade literally cracks every now and then, like when a new friend abandons them when they go clubbing in favor of some finance bros in the VIP section. In the face of this rejection, Korvo and Terry's bodies begin to bubble and little purple orbs of pus pop out. "Our bodies are not designed for this emotional overload," Korvo says, clawing at his skin. "There is a chance that we will overheat and die."

"I can't die! I have a bucket list," Terry responds. "I haven't touched a dolphin, or been on 'The Price is Right.' I'm supposed to fall in love on a train in India and maybe the woman is a little older than me?"

Again, sounds like a person trapped in quarantine, right? As the series continues, the universe of "Solar Opposites" continues to expand and the general lighthearted nature of the show — and an undercurrent of just straight raunchiness — is grounded by some of the more contemplative episodes. The sixth episode of the series, for example, delves into Korvo and Terry's relationship.

Up to that point, it's unclear whether the two are simply friends, associates, or romantic partners, but what becomes clear is that gender on their home planet of Shlorp isn't expressed in the same way it is here on Earth. So what does that mean for fitting in in their new home?

And, in a bigger sense, what does "normal" look like for them now?

This is a question a lot of us are probably asking ourselves about our current realities; I know that I've asked it often as my schedule has been upended and it seems that so many things are broken or warped beyond recognition. The world around us now feels deeply alien, which may be why shows like "Solar Opposites" are hitting at exactly the right time. Perhaps we can better parse our feelings about our planet when we look at them through an otherworldly lens.

Another new release that operates in the same orbit — though decidedly strikes a more consistently earnest chord — is "The Midnight Gospel." Heartfelt and trippy, this Netflix series is based on Duncan Trussell's interview podcast "The Duncan Trussell Family Hour" and is co-created by "Adventure Time" creator Pendleton Ward. The interviews from that podcast have been adapted into animated stories that center on Clancy (Trussell), who lives in what looks to be an Airstream that is decked out with a "Universe Simulator."

Each episode begins with him selecting the universe he wants to visit, each completely programmed with places, people (or creatures), and their individual challenges. After rocketing past planets and galaxies, Clancy crash-lands and is immediately thrown into some kind of mission, all of which are bookended by conversations with that planet's inhabitants. This is where the show really shines; the topics discussed are wide-ranging and deep — death, life, spirituality, love — each approached with eccentricity, enthusiasm and deep compassion.

The final episode of the series features the voice of Trussell's late mother, recorded when she was in the final stages of cancer, as the two contemplate what comes next. It's one of the most moving episodes of television I've seen in recent years.

Oh, and then there's psychedelics. The show dropped on 4/20 and when you see the series' animation style you'll be like, "Of course it did." The first episode of the series features Dr. Drew Pinksy, animated as a zombie-fighting president, discussing psychedelics and their effects, benefits and some of the unknowns inherent to those substances. There's this persistent idea that while we can't currently literally visit other universes, perhaps psychedelics can offer an opportunity to do so — and to maybe gain the insight that would be found on that trip — with our feet still on earthly ground.

It's an idea that is appealing while homebound, and one that will be further explored in the upcoming Netflix documentary "Have a Good Trip: Adventures in Psychedelics." Led by Nick Offerman, celebrities like Sarah Silverman, Nick Kroll, and A$AP Rocky will talk about some of their most mind-bending trips — through animation, reenactments and interviews.

Per the film's Netflix description, "Mixing comedy with a thorough investigation of psychedelics, 'Have a Good Trip' explores the pros, cons, science, history, future, pop cultural impact, and cosmic possibilities of hallucinogens."

Again, there's this appeal inherent to things that take us outside our earthly existence, that encourage us to think deeply about both the world (and worlds) around us and ourselves. While homebound and isolated, maybe use this recent spike in otherworldly animation to let your imagination land among the stars.

The first season of "Solar Opposites" is now streaming on Hulu. "The Midnight Gospel" is currently streaming on Netflix. "Have a Good Trip: Adventures in Psychedelics" premieres on Netflix on May 11.