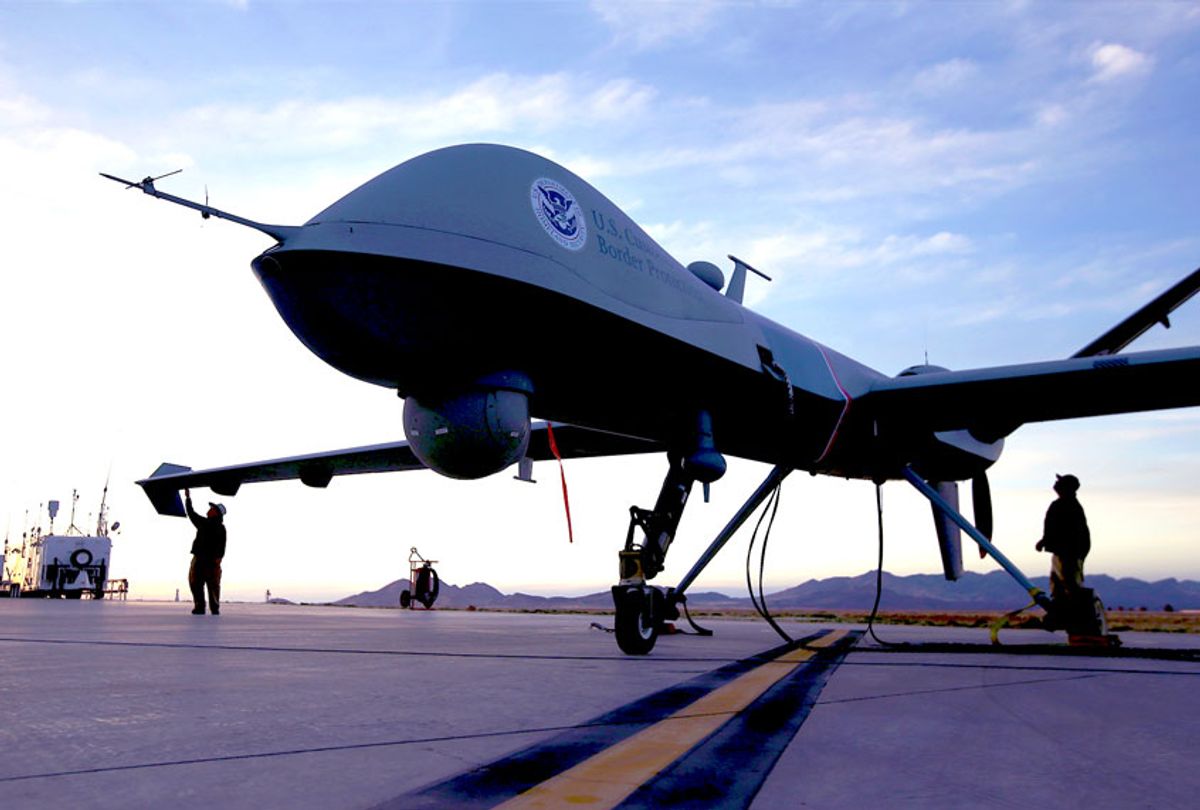 Research has consistently found that the militarization of police causes more civilian deaths and targets black communities. Hence, the appearance of military drones over Minneapolis, to monitor protests over the killing of George Floyd, seems especially galling.

Indeed, on Friday, a drone operated by US Customs and Border Protection (a force infamously comprised of many Trump sympathizers) flew over protests in Minneapolis to provide law enforcement officers on the ground with live video. Customs and Border Protection (CPB) later claimed that the drone "was preparing to provide live video to aid in situational awareness at the request of our federal law enforcement partners" but was later diverted away from the city when officials realized it was not needed.

"No government agency should be facilitating the over-policing of the Black community, period," American Civil Liberties Union Senior Legislative Counsel Neema Singh Guliani told Salon in a statement. "And CBP has no role in what's happening in Minneapolis at all. This rogue agency's use of military technology to surveil protesters inside U.S. borders is deeply disturbing, especially given CBP's lack of clear and strong policies to protect privacy and constitutional rights. This agency's use of drones over the city should be halted immediately."

George Floyd's murder at the hands of Minneapolis police has prompted a wave of solidarity protests around the country, with millions taking to the street. Beyond drones, the protests have revealed the myriad ways that technology is being used to intimidate and surveil protesters, and its effect on protests.

Catherine Crump, an assistant clinical professor at the University of California–Berkeley School of Law, and director of the Samuelson Law, Technology & Public Policy Clinic, pointed out that while police have a right to monitor protest activity, a line must be drawn when that surveillance becomes oppressive.

"People have a First Amendment right to engage in protest activity, but police are still generally permitted to engage in surveillance of protesters," Crump explained by email. "Police officers don't have to avert their eyes merely because someone is engaged in protest." She continued:

"That said, mass surveillance of protesters merely because they are exercising their First Amendment rights, or because a small handful may engage in unlawful activity, is oppressive and bad policy. Today there are powerful technologies – automatic license plate readers, cell phone tracking devices – that can work to identify everyone who was in a given area. The police should not use these technologies in a dragnet fashion to sweep up protesters. And flying a predator drone over protesters is uncalled for, given the association between those drones and our wars in places like Afghanistan and Yemen."

This brand of free speech threat is not limited to law enforcement agencies. President Donald Trump already tossed down a gauntlet in his war against the First Amendment last week, when he threatened to close down Twitter after the social media platform fact-checked one of his tweets. Shortly thereafter, Trump retaliated by issuing an executive order that could financially harm the company by challenging whether it should benefit from regulations that protect it from certain types of litigation.

Lest anyone think Trump's assault on free speech is limited to Silicon Valley companies, Trump threatened Monday to retaliate against the Floyd protesters by invoking the Insurrection Act, an 1807 law that he believes will allow him to use federal troops for domestic law enforcement.

"Invoking the Insurrection Act is unnecessary, and deploying more federal troops to suppress dissent would be irresponsible and dangerous," ACLU National Security Project Director Hina Shamsi told Salon in an email. "No level-headed governor is asking for an even more militarized response to civilian protests against police brutality and systemic racism — for good reason. There are already many reports of civilian police and some state National Guard forces engaging in serious abuses, and the deployment of military personnel, who are generally not trained for civilian law enforcement, only escalates the risks. This president must not cause the country and its people even more harm."