With summer around the corner, you can beat the heat inside with these new TV shows, specials, movies, and docs 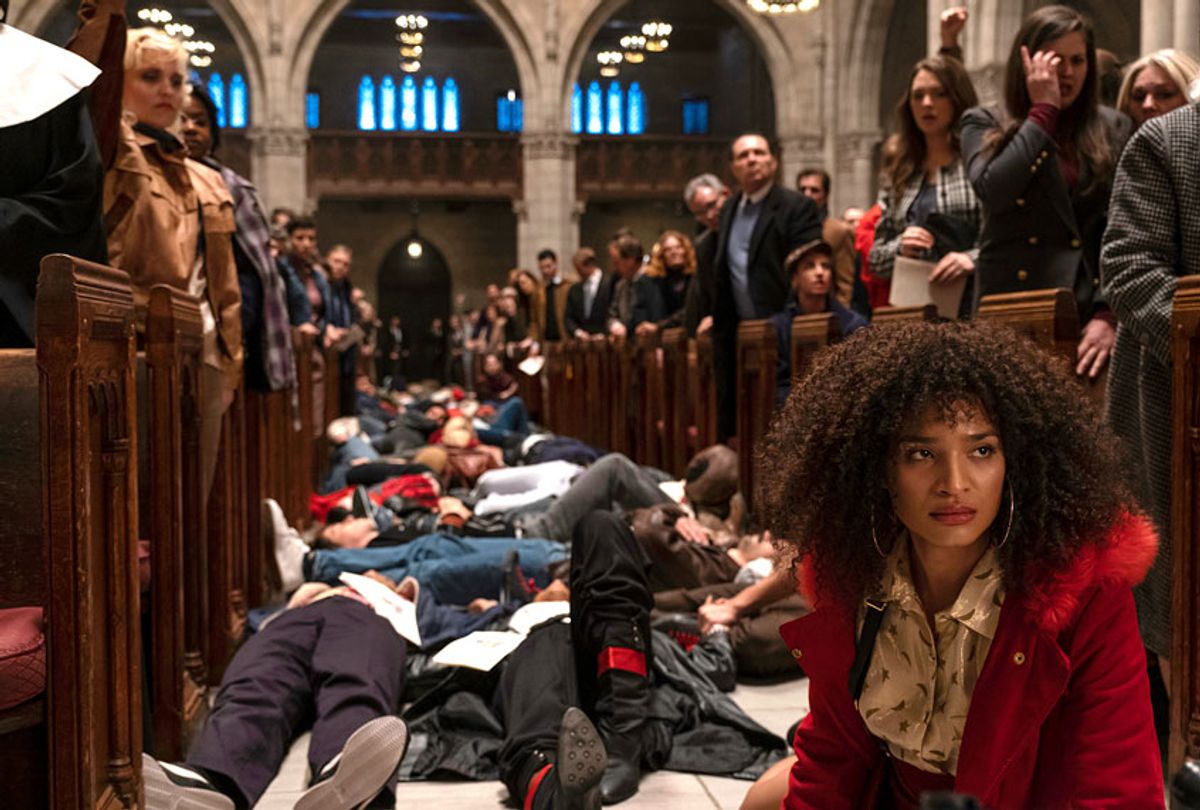 This is a deeply difficult, divisive time for our country — navigating a global pandemic while communities all across the country are risking their health in the streets, crying for justice in the murders of George Floyd, Breonna Taylor, Ahmaud Arbery and David McAtee. This comes after months of Trump's inaction regarding the impending novel coronavirus crisis, while also making threats to employ military troops to quell protests.

The news is increasingly hard to watch, but heartening, as thousands gather to march for justice, understanding, and equality. These are topics that we can't turn away from — and topics that are especially resonant as we enter Pride Month, held every June to honor the memory of the 1969 Stonewall uprising in Greenwich Village.

Netflix is already full of content that uplifts Black voices – from Ava DuVernay's "13th" and "When They See Us" to Justin Simien's "Dear White People" – and the LGBTQ community with "Orange Is the New Black," "Sense8," "The OA," "Sex Education," and "Chilling Adventures of Sabrina," among so many more.

For June, Netflix has plenty of fresh movies and shwos that engage with these groups. Some are more lighthearted, like the new season of "Queer Eye," while others may be tougher to absorb, like Spike Lee's "Da 5 Bloods," a story of African American Vietnam vets.

Check out highlights of what's new at Netflix in June, followed by a full list:

Whether it's uplifting the Japanese or feeling peachy in Georgia, the Fab 5 always touch our hearts with the compassionate way they transform people's lives, while also representing different ways queer people can present themselves. Their experiences this season in Philadelphia, however, have an added poignance.

It's hard not to fall in love with the makeover 'heroes" who give so much to their families, friends, and community, but as you watch, you wonder how the gay pastor and the Black community youth teacher are faring now amidst protests and police brutality. And how is the pediatric doctor, who was starting her job with a sense of optimism, holding up during the coronavirus pandemic? And the fishmonger who just opened a new seafood restaurant? The show has always felt important for its undeniable empathy, but now it feels like essential viewing more than ever.

Salon has been a fan of "Patriot Act with Hasan Minhaj" since it first began streaming two years ago. Minhaj, a "Daily Show" alum, pushed the boundaries of the news satire show format beyond that of Jon Stewart, creating more of "an amped up TED Talk" than a comedy show.

Intimate, incisive and informational, "Patriot Act" has covered topics ranging from immigration enforcement to, the Asian American vote, to "hype culture." While the new season doesn't debut until June 7, Minhaj had already come back early for three special episodes that included coverage of rent payments during the COVID-19 crisis, the legalization of marijuana, and how Trump's inaction has continued to exacerbate the pandemic fallout.

"In the same way that current 'Daily Show' host Trevor Noah's internationalist perspective has benefitted that show within an administration that's emphatically nationalist," Salon TV critic Melanie McFarland wrote, "Minhaj's identity as an Indian American, and a Muslim, and a person of color, and a man, and a millennial, and everything else, shapes his choice of topics and informs his entry point into taking them on."

We can't wait to see how he addresses the powder keg our country has become. He's already tackled the broken policing system (see below). What's next?

The second season of Ryan Murphy's "Pose" is finally making its way to Netflix from FX. It opens just as Madonna's "Vogue" becomes a hit, saturating radio airwaves and afternoon MTV slots. Because of this, ballroom culture is suddenly thrust into the mainstream spotlight, just as reports of the AIDS crisis are beginning to make the evening news.

This season examines the question of how much or what of America belongs to the predominately Black and Latinx and queer characters as Pray Tell (Billy Porter), Angel (Indya Moore), and more get involved in the AIDS Coalition to Unleash Power and ACT Up protests, targeting institutions that hindered progress in fighting the spread of H.I.V. and finding a cure for AIDS.

Watching the protesters cry, "Fight AIDS! Act up! Fight back!" to defend their community from an uncaring government, one is sadly reminded of how little the country has evolved. Today, as Americans take to the streets to protest the threat of the police on Black lives, the novel coronavirus is also hitting the community in disproportionate numbers.

It's not all heartache and sacrifce though, and "Pose" celebrates the resilience of the ballroom community – despite the economic setbacks, dirty dealings, and deaths – to end in a breathaking, showstopping finale spectacle set to "The Star Spangled Banner" that leaves no doubt that these are the people who make America so great.

In this New Joint from Academy Award-winning director Spike Lee, four African American veterans — Paul (Delroy Lindo), Otis (Clarke Peters), Eddie (Norm Lewis), and Melvin (Isiah Whitlock, Jr.) — return to Vietnam to search for the remains of their fallen Squad Leader (Chadwick Boseman) and a stash of buried gold. Joined by Paul's concerned son (Jonathan Majors), the heroes battle "forces of Man and Nature," all while confronted by the lasting ravages of the Vietnam War.

Lee recently recontextualized the police killing of George Floyd by cutting together a short film that also included "Do the Right Thing" character Radio Raheem (Bill Nunn). With "Da 5 Bloods," the director once again seeks to bring the marginalized narrative to the forefront, giving nuance and respect to the Black veterans caught in one of the most unpopular wars in U.S. history.

In this 2018 documentary, 18-year-old French filmmaker Téo Frank travels the U.S. to investigate underground hip-hop artists doing exceptional work outside the music industry. His trip takes a turn when he crosses paths with photographer Mason Strehl in Alaska. Their encounter inspires him to go to New York where he met artists like Awon, Phoniks, Tiff the Gift, and Dephlow.

Grappling with films like "A Florida Enchantment," "Dog Day Afternoon," "The Crying Game," and "Boys Don't Cry," and with shows like "The Jeffersons," "The L-Word," and "Pose," they trace a history that is at once dehumanizing, yet also evolving, complex, and sometimes humorous.

From these examples emerges a visible gap and overlap in how trans individuals are represented on screen and what they experience in their day-to-day lives. "Disclosure," which is directed by Sam Feder, is simultaneously an invitation for viewers to confront unexamined assumptions and biases, while also showing a new way forward to better understanding trans people.

In the first season of Ryan Murphy's "The Politician," we saw driven rich kid Payton (Ben Platt) attempting to navigate the most treacherous political landscape of all: high school. His campaign for student body president saw two-timing, backstabbing, and the occasional dose of advice from his beloved mother, played by Gwyneth Paltrow.

Season 2 fast-forwards to find Payton trying to "unseat Dede Standish (Judith Light) in the New York State Senate race. As a long-time incumbent and greatly admired Senate Majority Leader with no-nonsense Chief of Staff, Hadassah Gold (Bette Midler) at her side, Dede's re-election was supposed to be easy, but Payton — who sees this as the next step on his path to the presidency — must decide what kind of politician he ultimately wants to be in order to succeed, even if that means exposing secrets, lies, and a throuple."

Comedian Eric Andre presents his very first Netflix original stand-up special. Taking the stage in New Orleans, Andre breaks the boundaries of comedy as he critiques the war on drugs, the war on sex, and the war on fart jokes (per Netflix, so that seems to be important). He also goes deep on flawed fast-food icons, the wonders of autofill, and the bizarre choice for the "Cops" theme song.

Below, check out the full list of what's coming to Netflix in June.

"Baki: The Great Raitai Tournament Saga"
"Can You Hear Me? / M'entends-tu?"

"Queen of the South" Season 4

"A Whisker Away"
"The Order" Season 2