Want candidates who will reach beyond their base? Change how we vote 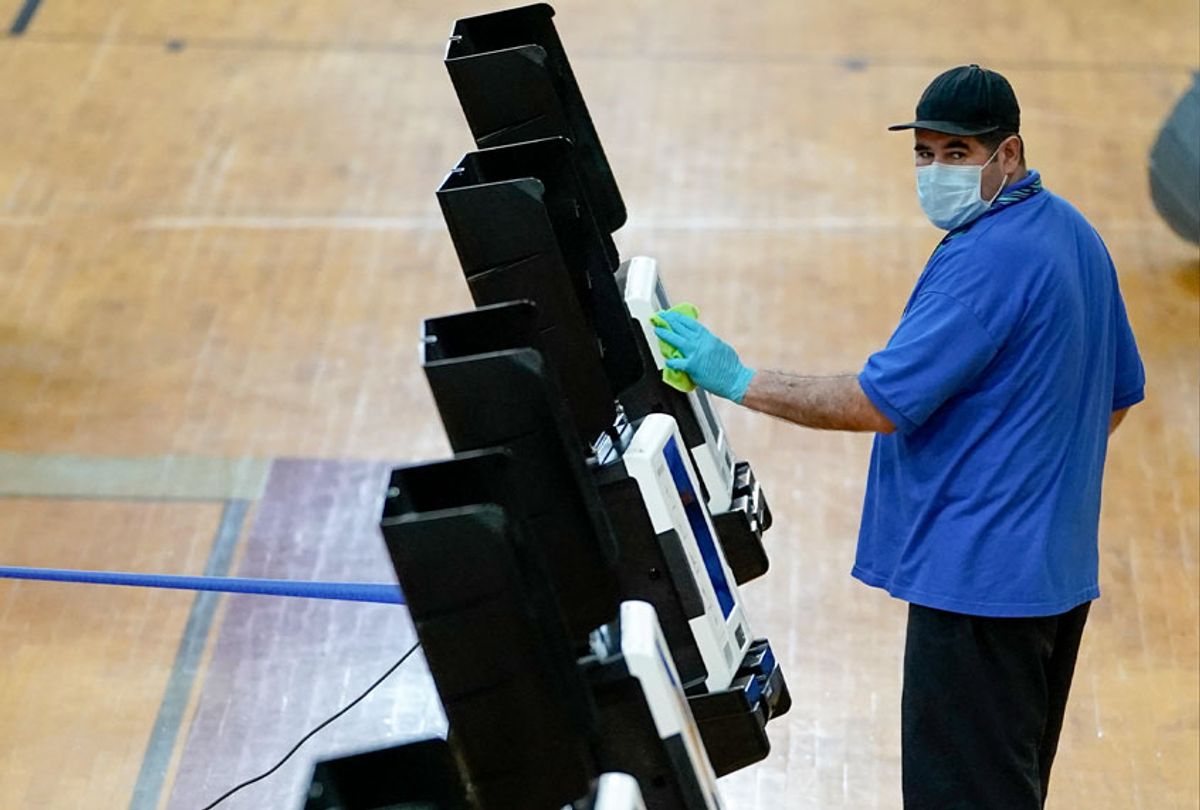 A worker cleans a voting machine after it was used at McKinley Technology High School on primary election day on June 2, 2020 in Washington, DC. On Tuesday, nine states and the District of Columbia are holding primaries, most of which were previously delayed due to the coronavirus pandemic. (Drew Angerer/Getty Images)
--

Eight states and Washington D.C. held primary elections on Tuesday, many of which had been postponed due to the coronavirus, only to be rescheduled amidst a continued health crisis and the most sustained public protests in more than 50 years.

Despite a pandemic, one-sided presidential nomination contests, and nationwide protests about police violence and racial equality, the primaries were important — and instructive. First, it was a decided mixed dry run for voting at home in the many states new to major uses of absentee voting. Second, unsafe lines lasting over two hours in the nation's capital showed we remain challenged with in-person voting as well. We have a lot of work to do ahead of the fall.

We also continue to see misfires based on clinging to a single-choice, plurality vote system. Many candidates won with less than 50 percent support this week, often in races where their party's dominance means a November cakewalk. When winning takes less votes, it requires less engagement with voters — and it's far from assured that elected officials will represent their constituents' values and desires.

For example, look at the results from Indiana. Fifteen congressional primaries were held in the Hoosier state on Tuesday to determine both Democratic and Republican nominees. Eight of the 15 winners "won" with 43 percent of the vote or less. Six victorious candidates moved onto the fall election with a winning percentage in the 30s.

Indiana may have had the most plurality winners, but they were hardly the only state with this issue. Preliminary events show that the new mayor of Baltimore is nearly certain to take office after earning well under a third of the primary vote. In Pennsylvania, New Mexico and Iowa, U.S. House candidates won key races without a majority — indeed, one with under 30 percent in one of the nation's most competitive districts — as did the Iowa Democrat selected to run against GOP incumbent Joni Ernst this fall.

Now many of these candidates may make fine public servants. And a low winning percentage isn't their fault: Crowded fields often lead to plurality wins. Many primaries have more than one qualified candidate. Voters should get to choose among many vibrant options. But when a winner earns between 33 and 43 percent of the vote, as more than half of the Indiana victors did this week, that means upwards of two-thirds inside their own party preferred another candidate!

There's always more legitimacy when a candidate wins a race with 50 percent of the vote. You also end up with a winner that reflects the will of the most people and is more certain to have listened to voters. After all, when candidates know they can win with just a third of the people, they campaign differently. They might focus on turning out their base. They might not bother trying to persuade supporters of another candidate or from another community. And with so many uncompetitive districts — none of Indiana's nine congressional seats has flipped from one party to the other in nearly a decade — a low-turnout June primary can elevate someone to a safe seat in Congress without having to appeal to more than a third of their own side.

This is one of the reasons why our politics seems so stuck. Not only do we have a hard time talking to each other, the very structure of our elections doesn't require our politicians to even try. And when you win by turning out the base, why risk appealing to anyone else? A broken system not only elects politicians who need not listen to everyone, it actually incentivizes them to govern that way too.

There is a better way and it's catching on nationwide. Through the simple means of offering voters to indicate their backup choices in order of preference, ranked choice voting solves the problem of plurality winners. As proven in a growing number of state and city elections, It protects voter choice and ensures that everyone gets to select from a wide array of candidates. But it also pushes candidates to seek votes — be it a first, second or third choice — everywhere, and produces a winner with the widest support from everyone. It works like an instant runoff. Instead of selecting one candidate, voters rank the field in order. The winner is the first candidate to cross 50 percent; if no one does during the first round, then the last place finisher is eliminated and the backup choices come into play.

The true elegance of ranked choice voting is that it encourages candidates to campaign and to govern in an inclusive manner that leads to better representation for everyone. It incentivizes candidates to look beyond their base and seek out second-choice support. When they do that, they learn about new concerns, they develop greater empathy, and they're able to bring that knowledge to Washington. Too many issues have been ignored for too long, in part because our system allows politicians to ignore too many people in their own districts. Under RCV, reaching out and hearing others suddenly becomes good politics.

It's not a cure-all. Campaigns are less negative with ranked choice voting, but not without lapses in civility. But our politics needs more listening. It needs greater involvement and the voices of everyone. And we need leaders who are attuned to the concerns of everyone. Better elections would give us a better shot at success.